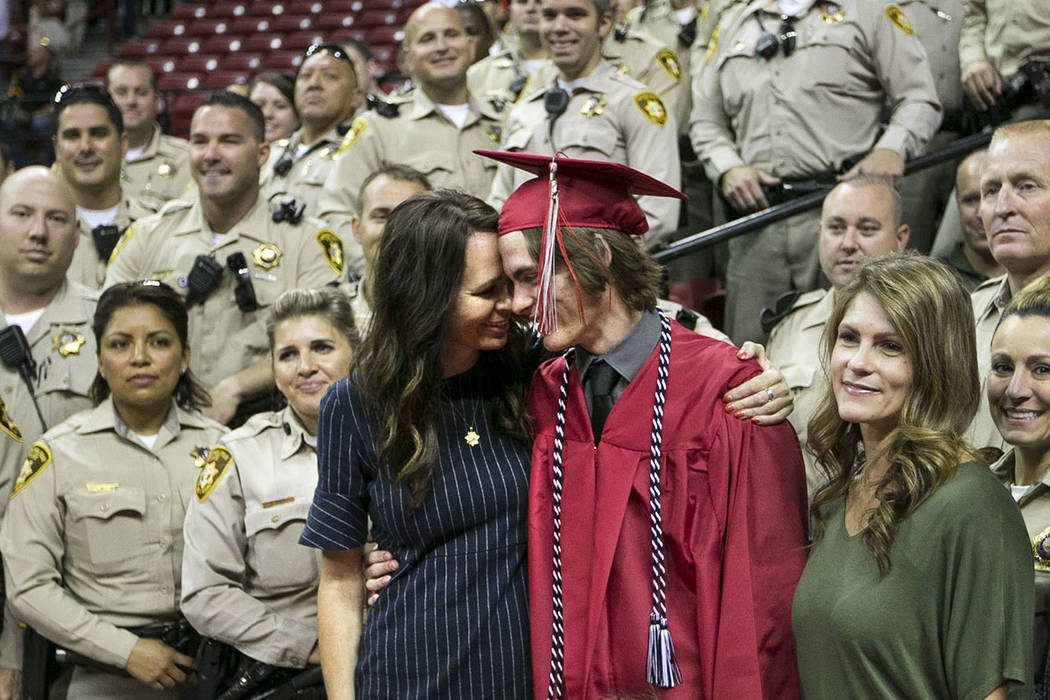 Daxton Beck gets a hug from his mother Nicole Beck as they gather for a photo with a group of Metro Officers following his graduation ceremony at Thomas and Mack in Las Vegas on Saturday, June 10, 2017. Richard Brian Las Vegas Review-Journal @vegasphotograph 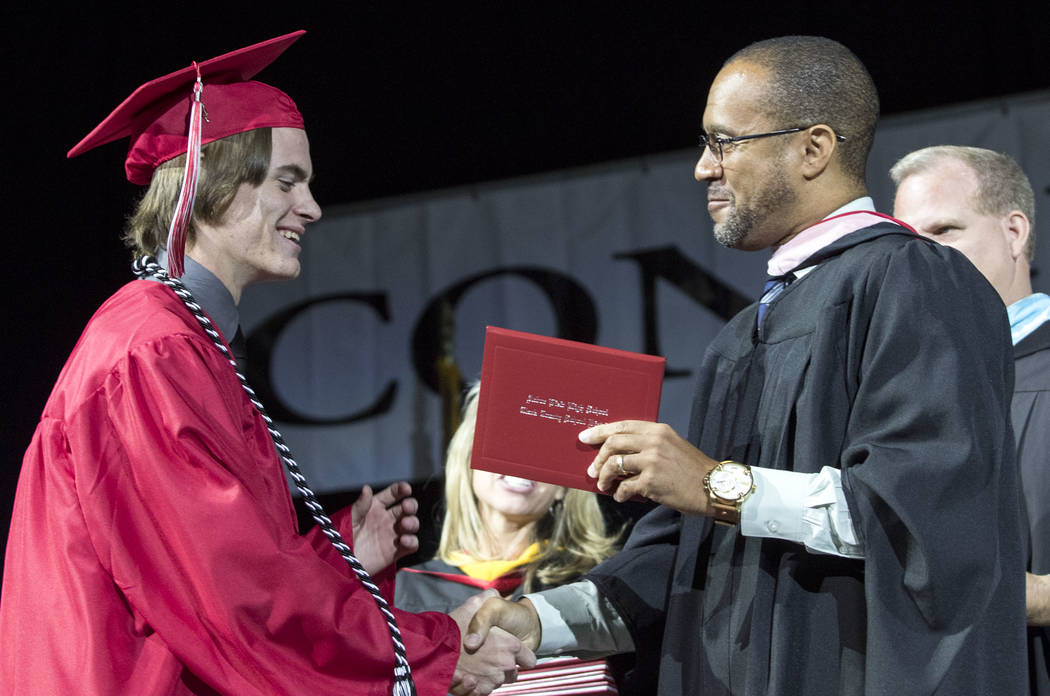 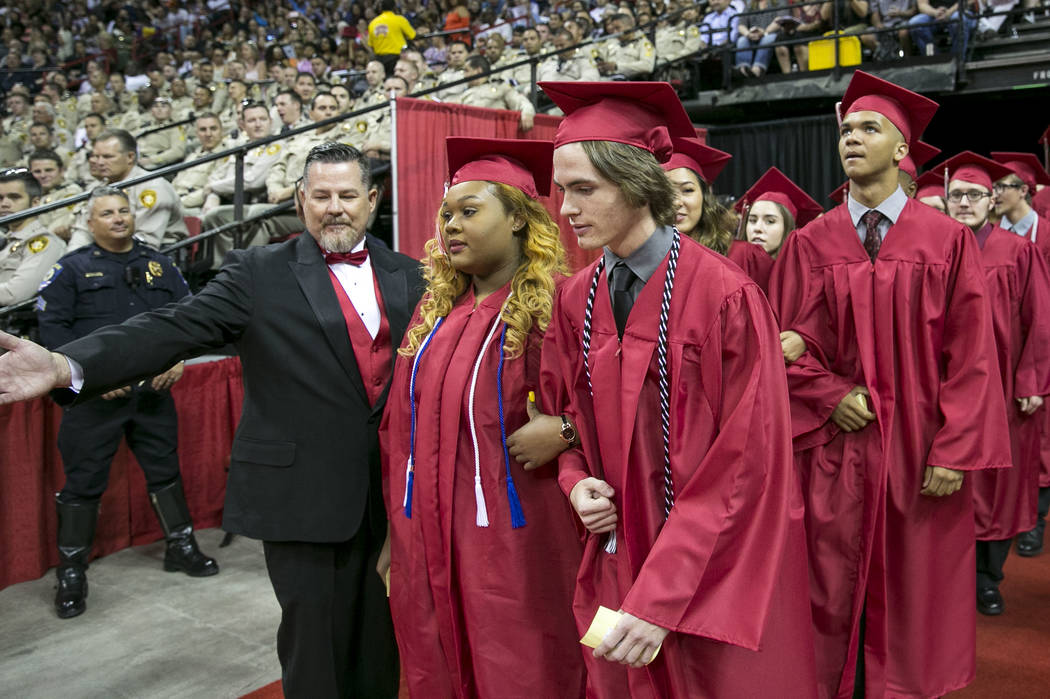 Daxton Beck, the son of slained Metro Officer Alyn Beck, and a classmate during his graduation ceremony at Thomas and Mack in Las Vegas on Saturday, June 10, 2017. Richard Brian Las Vegas Review-Journal @vegasphotograph 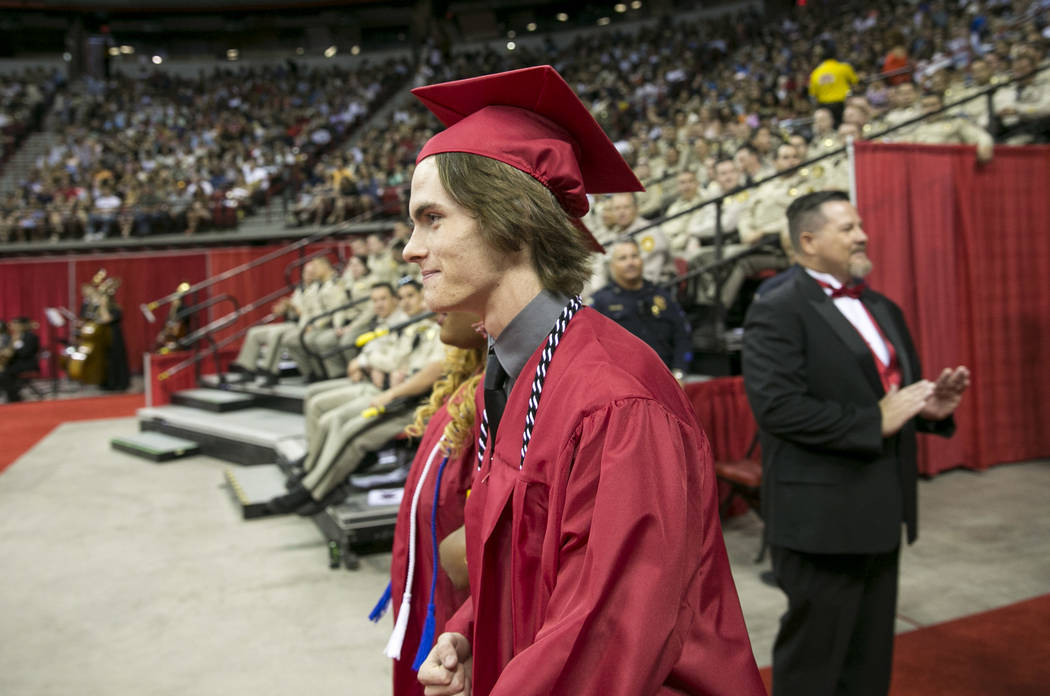 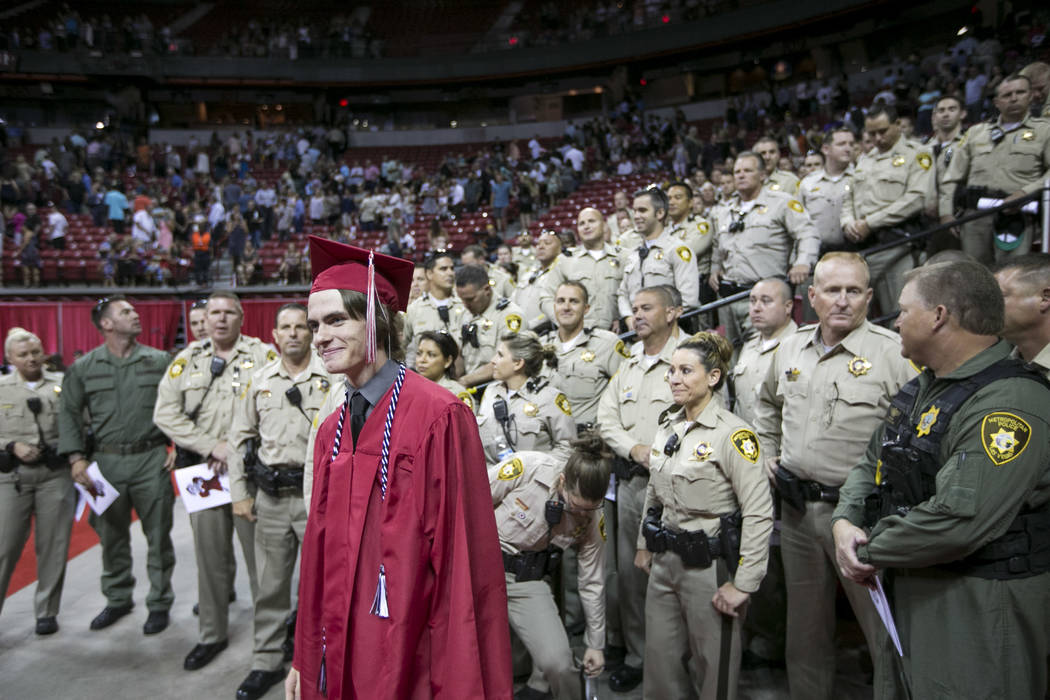 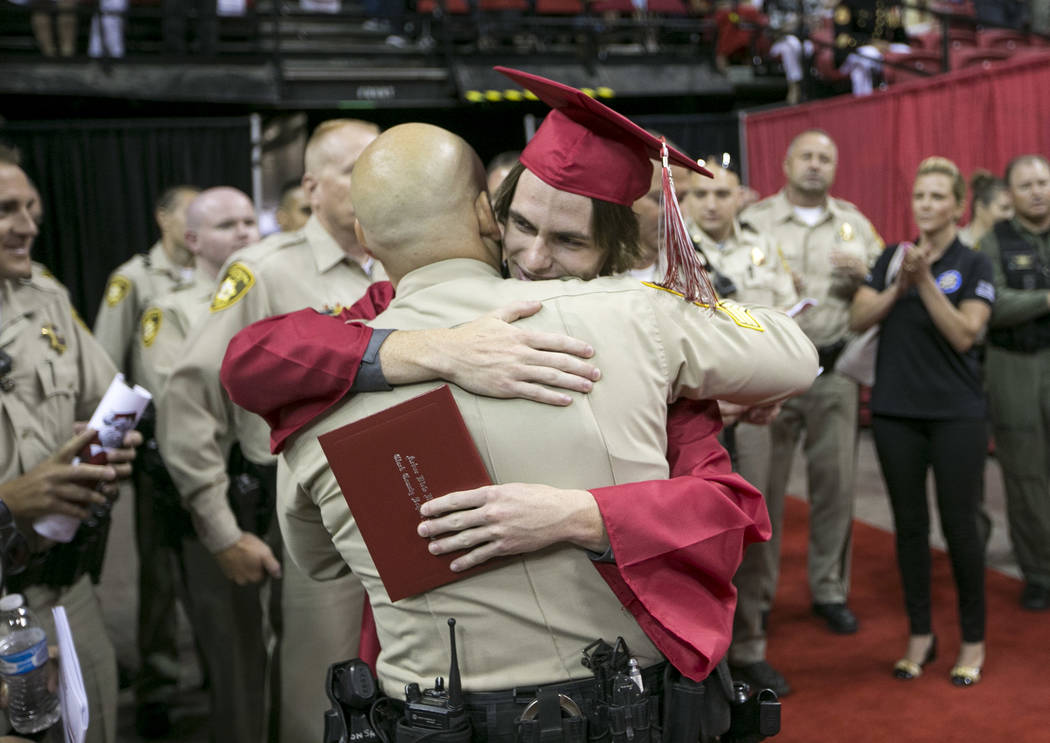 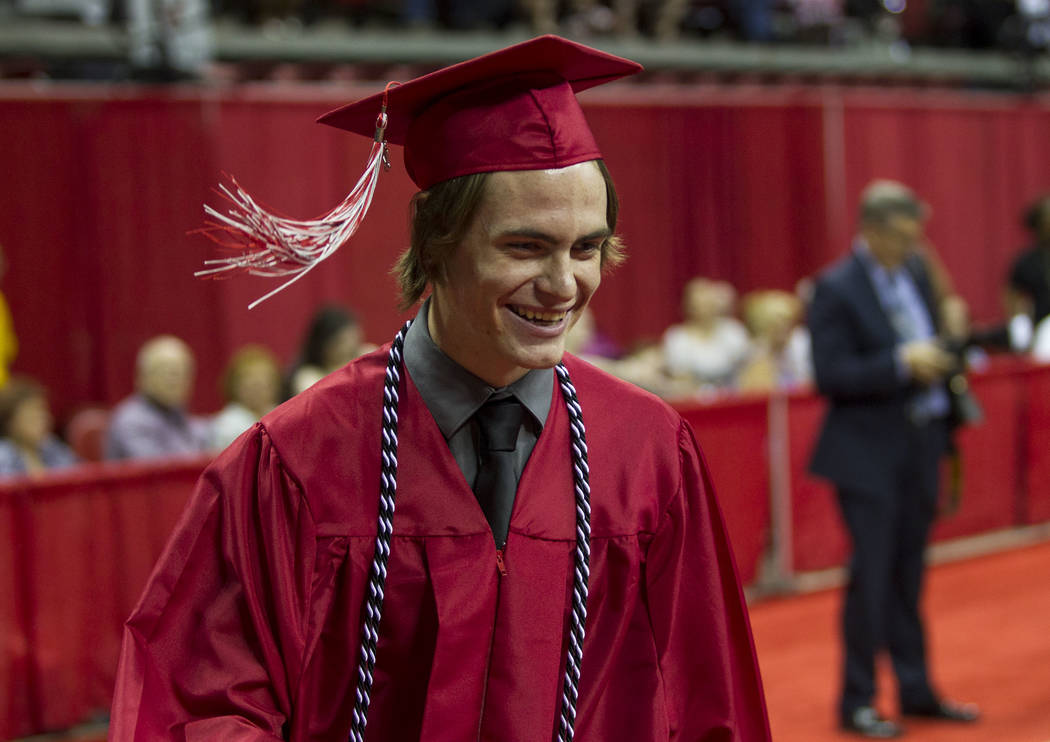 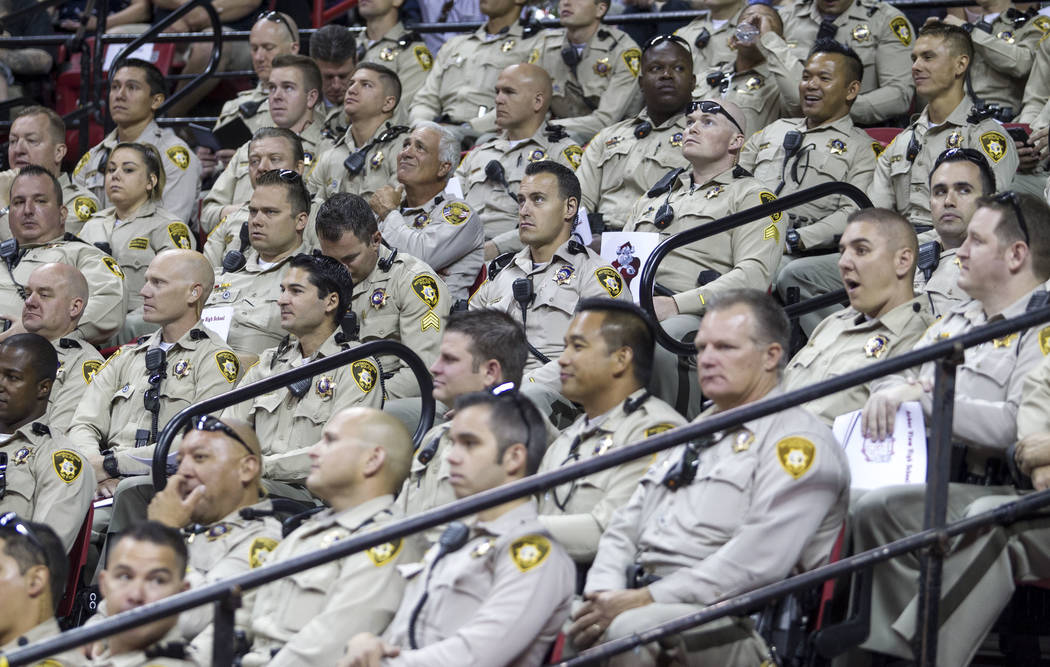 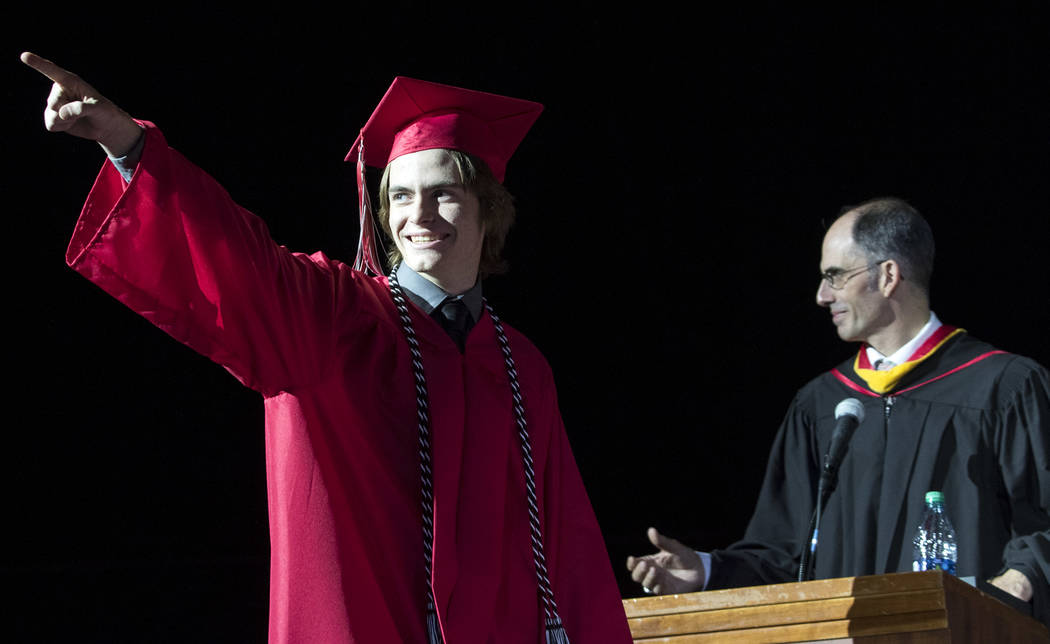 About 150 uniformed police officers stood in unison to clap and cheer as 17-year-old Daxton Alyn Beck walked across the stage at the Thomas & Mack Center to receive his Arbor View High School diploma Saturday.

Daxton’s graduation came just three years and two days after his father, Alyn Beck, and Igor Soldo, both Metropolitan Police Department officers, were gunned down while on their lunch break at a restaurant.

Though his father was not present to see him accept his diploma, the officers were volunteering as stand-ins at the ceremony in support of Daxton, his family and his father’s legacy, the Police Department said in a release.

“We think it’s important to show the entire community that we haven’t forgotten about officer Beck and officer Soldo,” said 53-year-old Scott Nicholas, who is vice president of the officers’ union, the Las Vegas Police Protective Association. Nicholas attended the graduation with his wife, a corrections officer with the Police Department.

“For me it was more about letting him know he has extended family, and that we’re all here for him,” Jessica Nicholas said. “Just to show him that he’s never alone.”

“It’s been just over three years since the senseless murder of these two officers and we don’t want their children to think we’ve forgotten him or his services to this community,” Scott Nicholas said. “It’s very emotionally charging for us to be here and to see his success as he grows up as a young man.

“It’s not just this event, but anything in the future as well, whether it’s weddings or college graduation or anything else,” he said. “We just want him to know that his dad was important to us.”

Officer Tim Gross said that he was friends with Alyn Beck and that the pair worked on the same squad for several years.

“He was just a good guy … a damn good officer,” Gross said. “I hate to be here for this, I have to be honest with you. Because I wish he could be here for him.”

“But we’re here out of respect … to let him and his family know that ‘You’re not forgotten. You weren’t just a one-year blip on the screen. It’s forever.’”

Before the ceremony, Nicole Beck, Daxton’s mother, walked through the stands at the arena, greeting and accepting hugs from the dozens of officers seated in her section. Her blue eyes brimmed with tears as she spoke about her son, his achievements and the show of solidarity from the department.

“The support is amazing from the Metro officers,” she said, pausing to look at the uniformed officers sitting behind her. “I appreciate that they’re willing to come out and support, and — it’s making me emotional — it’s really neat. And I know it means a lot to Daxton.”

As Arbor View’s orchestra, in which Daxton’s 14-year-old sister played cello, performed an instrumental version of “Sweet Child O’ Mine” by Guns N’ Roses, Beck talked about her son’s achievements, including competing on Arbor View’s varsity swim team for two years, running on the track team and participating in the school’s biomedical program.

“It’s been a bit of a roller coaster, but he’s a very resilient kid,” Nicole Beck said. “I’m super proud of everything that he’s been through, and that he has gotten to this point. He’s just been such a strength to me. He’s an awesome kid.”

After the last name was called and the graduates had turned the tassels on their red and silver caps, Daxton was escorted to the back of the arena by two officers. The rest of the officers poured out of the stands and onto the red carpet to greet him.

Beck, who studied biomedical sciences and psychology during high school, said his first move as a high school graduate will be to serve a mission beginning in late August for the Church of Jesus Christ of Latter-day Saints.

As for what’s in store after his mission, “I’m not entirely sure yet,” he said after the ceremony, a lei with folded money and two black and white cords draped around his neck. “I’m moving on with my life and taking a great leap forward.”

As his classmates were led out of the arena, he walked amid the sea of tan-uniformed officers, who had stood in unison, and clapped and cheered as he’d walked across the stage earlier. The officers patted him on the back, congratulated him and pulled him into hugs.

“They’ve always been there supporting me, so having them here is just a big get-together of support,” he said. “It’s just mind-boggling.”

Moments later, Beck beamed as he stood at the front of the crowd of officers and posed for a group photo, one hand clutching his diploma, the other wrapped around his mother’s waist.