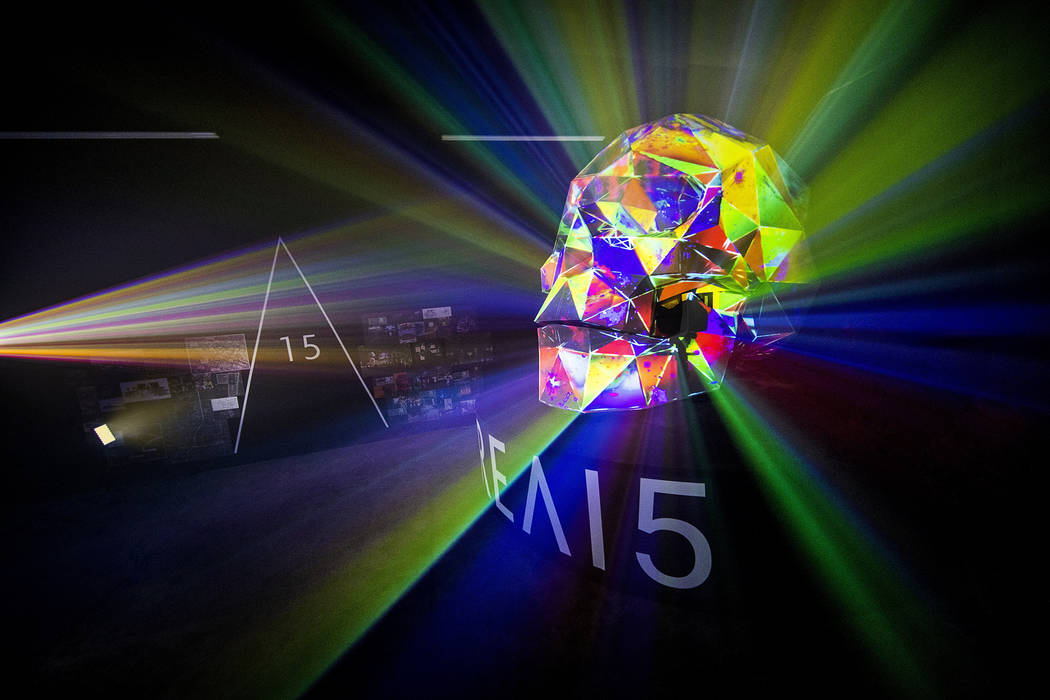 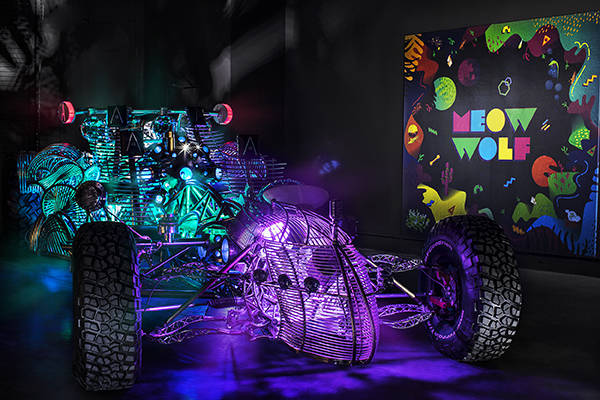 Henry Chang's art car will sit in The Spine at Area15. The Vox Agency 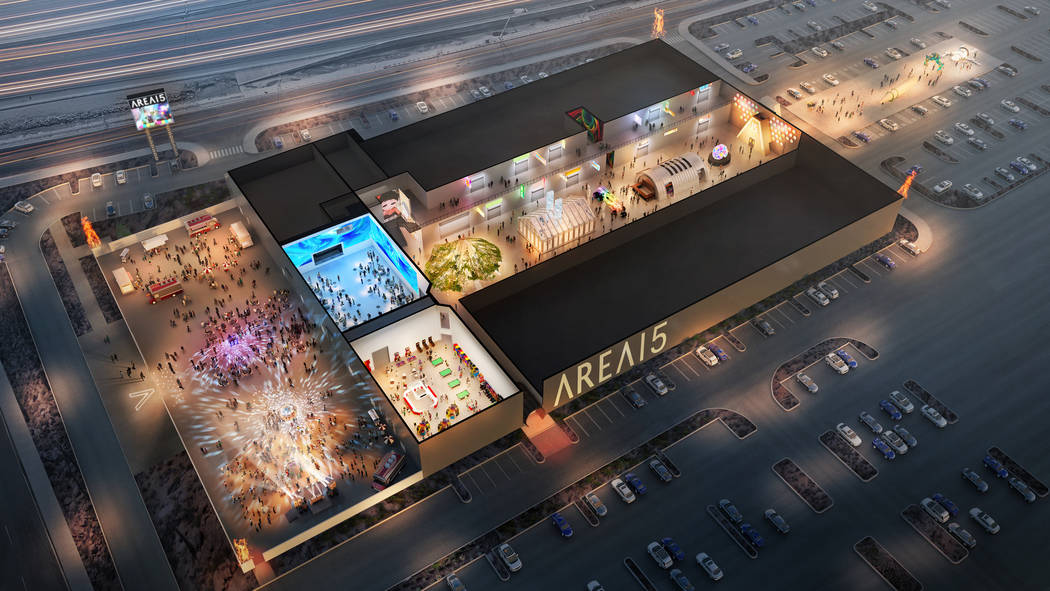 A rendering of Area15. The Vox Agency 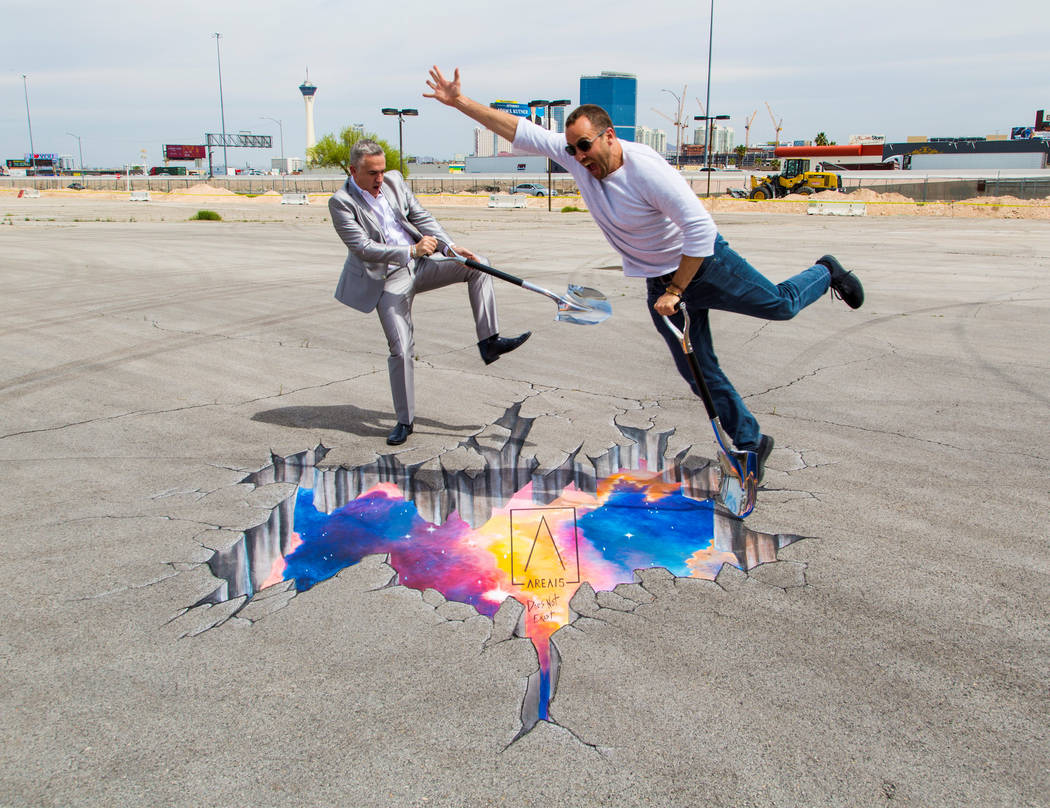 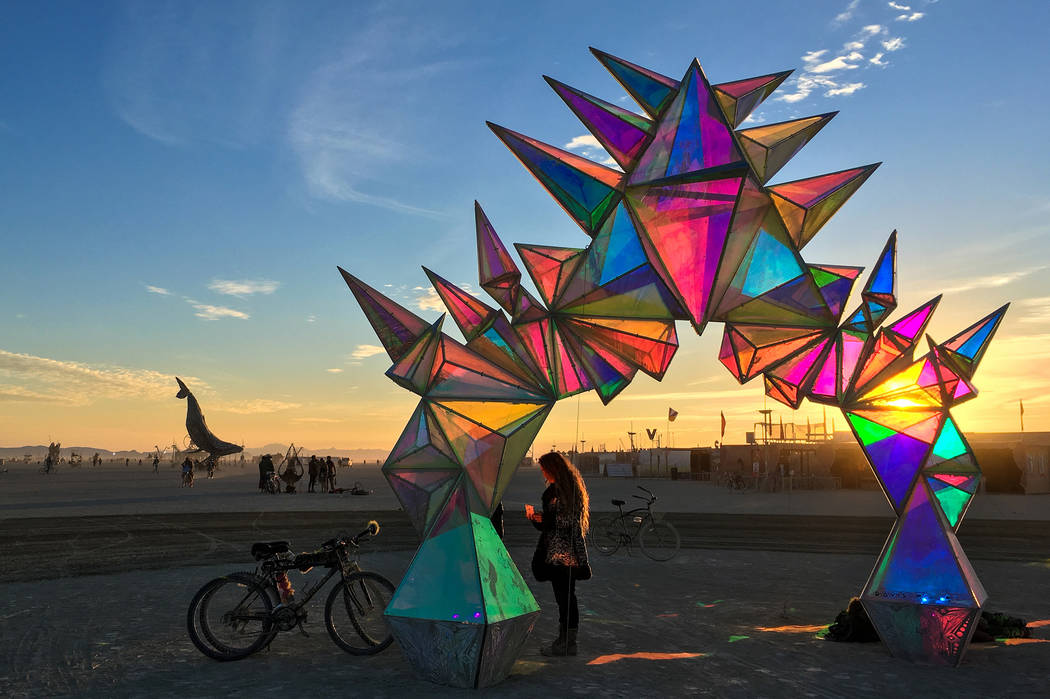 Art pieces from Burning Man will be onoutdoor display at Area15. The Vox Agency 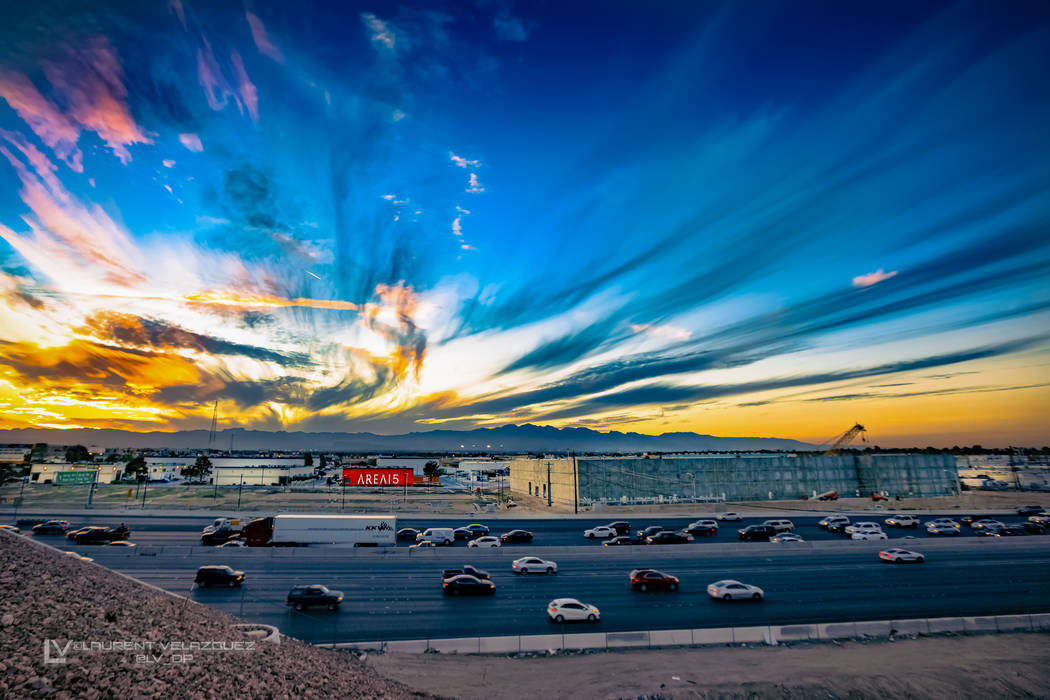 Area15 is located at Desert Inn and I-15. The Vox Agency 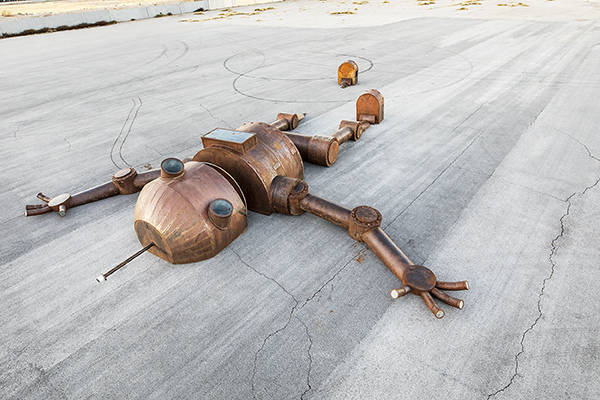 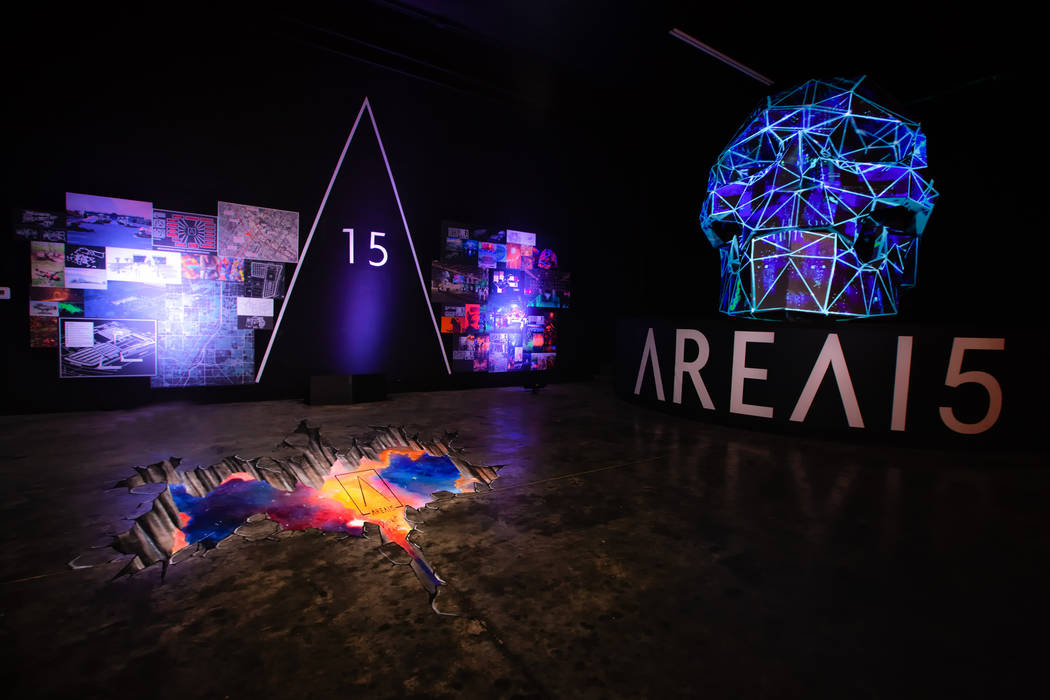 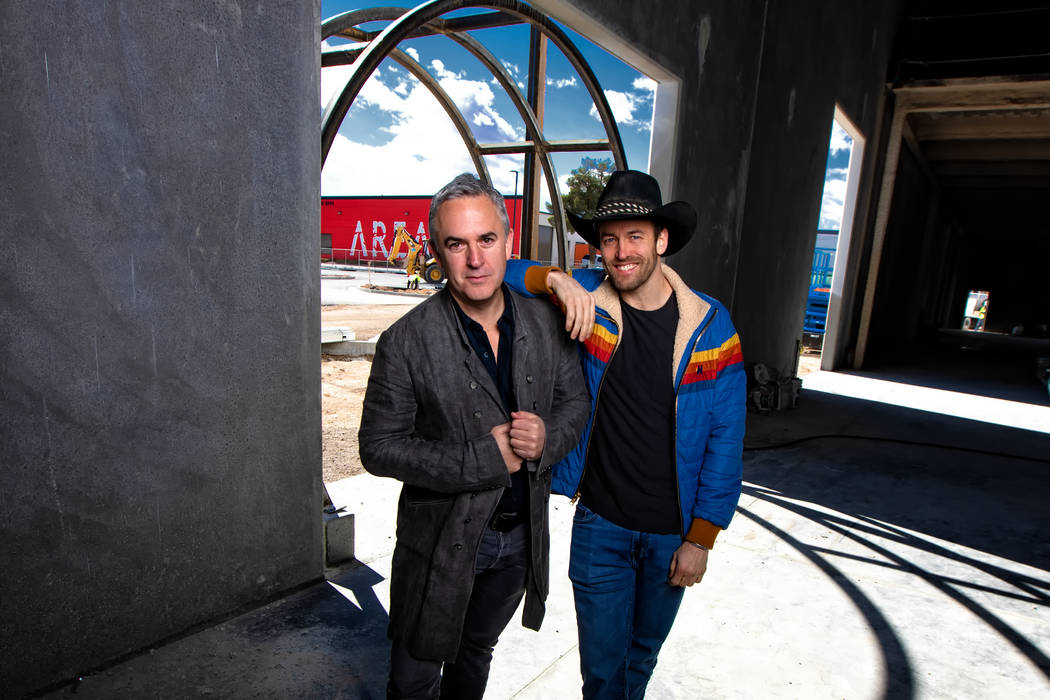 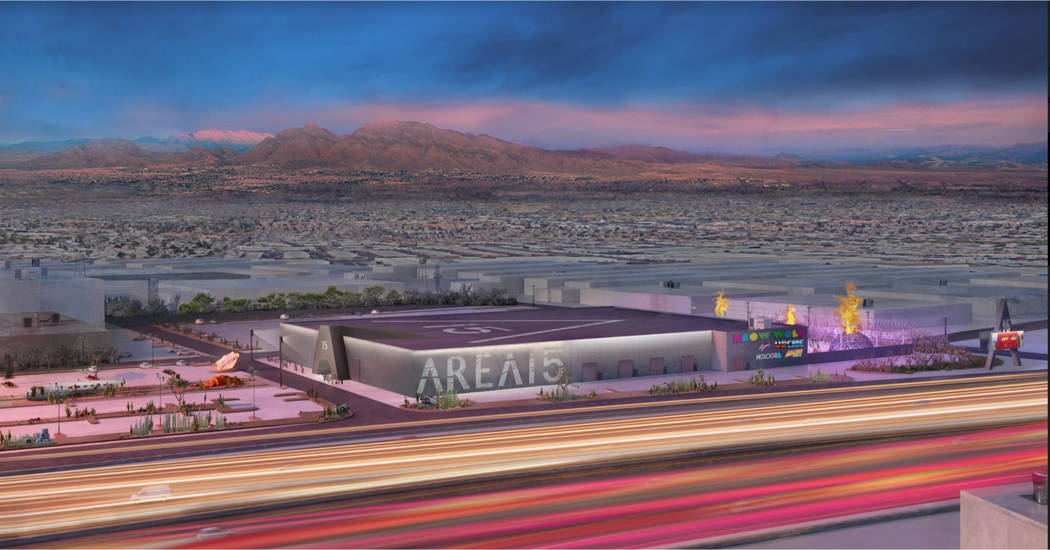 It’s a curious slogan for a building rising in an industrial area not far from the Strip.

The 200,000-square foot confluence of art and technology falls somewhere in the no man’s land between shopping mall and amusement park. It’s set to open in Las Vegas at the end of the year.

The retail, art and entertainment complex at the northwest juncture of Interstate 15 and Desert Inn Road is the brainchild of Fisher and Chief Creative Officer Michael Beneville.

On a recent Thursday morning, Fisher and Beneville flew in from New York for a meeting in the pitch black room of the leasing office next to Area15’s construction site. The room is illuminated by a 12-foot-tall 3D skull that alternates between twinkling monochrome, neon paisley and golden yellow gears. Across the room, an art car outfitted with tangles of metal rods by Las Vegas artist Henry Chang emits cool LEDs. Two visitors — of the green-toned, wide-eyed variety — sit politely on the couch.

“It’s an open-source platform for the 21st century,” Fisher says. “The idea is to explore the states of being: wakefulness, sleep, virtual reality and when your mind is altered.”

Area15 will include art exhibits, event space, retail and dining.

The main corridor of the complex will be dubbed The Spine. At Area15’s entrance will sit artist Bart Kresa’s 3D skull and Chang’s art car. The common area will feature exhibited artworks, a central bar inside a greenhouse and a 32-foot-tall volcano that can be rented for private events. The Spine will be flanked by a small bazaar for local artists and a curated food hall.

A two-story space left of The Spine will house the Meow Wolf experience. The Santa Fe art collective supported by “Game of Thrones” creator George R.R. Martin previously made a mark in Las Vegas when it transformed the Art Motel into a 21-room sensory experience at 2017’s Life is Beautiful festival. Fantastical rooms and Meow Wolf’s trademark DIY-style art will encompass the interactive art space.

An event room that can accommodate 100 to 5,000 people will be composed of four walls of projection mapping.

It’s not a black box, it’s a blank canvas,” Fisher says. “It can be any colors, any images. It’s basically like having four walls of TV screens. You can make it your own space.”

The room connects to an outdoor venue that can accommodate festivals, concerts and private events.

“We think convention groups that are staying on the Strip could be big here,” Fisher says.

Outside the building, a lawn will serve as a gallery space for large-scale artworks created for festivals such as Burning Man.

The rest of Area15 will be dedicated to what Fisher describes as experiential commerce.

“We wouldn’t take a regular sneaker store,” Fisher explains. “But if the store has VR that lets me imagine running in the Boston Marathon, now that’s interesting.”

Other tenants he and Beneville want to draw are a bar-arcade, escape room, brewery and VR experiences.

“The context is important,” Beneville says. “If you’re in a place where you had this immersive, amazing experience, it sucks if you exit into a strip mall parking lot.”

“It’s a little jarring, isn’t it?” Fisher says. “But now you walk out, and you’re in The Spine. You can get an ice cream, debrief, and go do something else that’s crazy.”

“The word that defines it,” Beneville says, “is curiosity. That’s who our customer is, someone who is curious.”

Fisher purchased the land in 2005 with his real estate development firm Fisher Brothers. He declined to reveal the price. The financial crisis postponed immediate plans for development until three years ago.

Fisher and Beneville determined that they wanted to develop something original.

“How do you break the gravitational pull of something that’s done so well?” Fisher asks, gesturing toward the Strip. “The only way is to offer something really different.”

They settled on succeeding where the shopping mall had failed: create a setting for experiential commerce.

Only in Las Vegas

For Fisher and Beneville, the setting of Las Vegas was integral to Area15’s development.

“If we were in another city, it wouldn’t force us to this same thought pattern,” Fisher says. “Here, you’ve got the Strip right behind us. This requires radical differentiation to be successful. I don’t think any other city could’ve given us the impetus and creativity.”

While the name “Area15” is a play on the secret government facility in Nevada, it’s taken on two more serendipitous meanings. Fisher Brothers started in 1915. And the lot sits next to the I-15.

“When you’re a creative, you don’t want to force creativity,” Beneville says. “You want things to happen. We’ve had a lot of moments like that with this.”

“On one hand, it’s very traditional,” Fisher adds. “It’s event space and leasing to tenants. On the other hand, this hasn’t been done before. It doesn’t exist.”