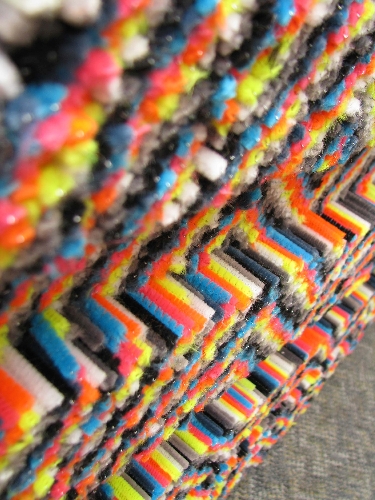 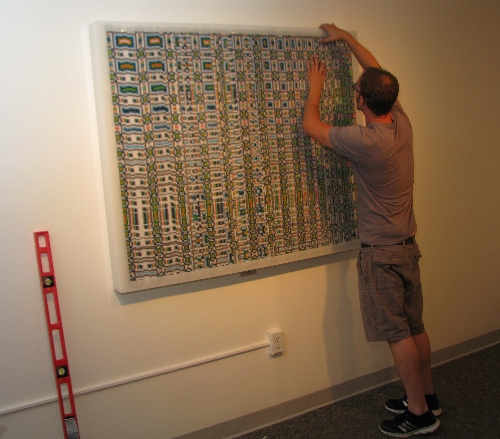 “I was getting all of these weird images on my screen,” Denker said. “You could kind of tell what it was, but it was all pixilated.”

Denker’s computer is back up and running, and the art it led to is on display in “Screensaver” in the gallery of the Winchester Cultural Center, 3150 S. McLeod Drive. The show is on display from 10 a.m. to 8 p.m. Tuesdays through Fridays and 9 a.m. to 6 p.m. Saturdays through Aug. 17.

Much of the work is large and consists of nonrepresentational patterns made of unusual materials.

“The substrate of the pieces is Coroplast, which is sort of like plastic corrugated cardboard, but the holes are more square,” Denker said. “I’m putting pipe cleaners in the holes to make geometric patterns.”

Denker ordered 40,000 pipe cleaners in 12 colors and then cut each one into eight to 12 pieces. He estimated he has worked with 400,000 individual pieces.

“My hands have gotten pretty calloused from working with them,” he said.

Denker moved to Las Vegas in 2007 and began exhibiting his work at Trifecta Gallery in The Arts Factory, 107 E. Charleston Blvd., in 2010. His work before “Screensaver” was still related to computers but was less tactile and featured more smoothly refined images.

He drew structures on his computer using Google SketchUp, 3-D modeling software. The company was purchased by Trimble in June and is now called Trimble SketchUp.

He projected the images onto paper and then reproduced them using pen and colored pencil. The finished product is primarily arrangements of three-dimensional renderings of geometric shapes

“When I first saw his work, I wasn’t interested because we don’t carry digital work at the gallery,” said Marty Walsh, owner of Trifecta Gallery. “When he told me it wasn’t digital, I had to see the pieces in person. I just fell in love with the work right there.”

The work in “Screensaver” is drawn from the previous work but also influenced by Denker’s reaction to Las Vegas.

“It’s kind of a combination of brain synapses and the environment out here,” he said. “All of these pieces are kind of based on neon lights and casino carpet.”

“It’s such a tedious and painstaking process,” Walsh said. “The craftsmanship is amazing.”

While some of the work was originally designed on the computer, Denker said that about midway through, he abandoned the practice and began working directly with the materials. This led to pieces where the pattern of the colors interplays with the pattern of the surface, as some pipe cleaners were placed at different depths, creating pixilated waves of color and pattern.

Denker believes he is finally getting a feel for the material and is using it to its full extent.

“I went from nine months of ‘What the hell am I doing?’ to now, where I’m just ready to go crazy with it,” he said. “I’m really excited to see where it goes from here.”