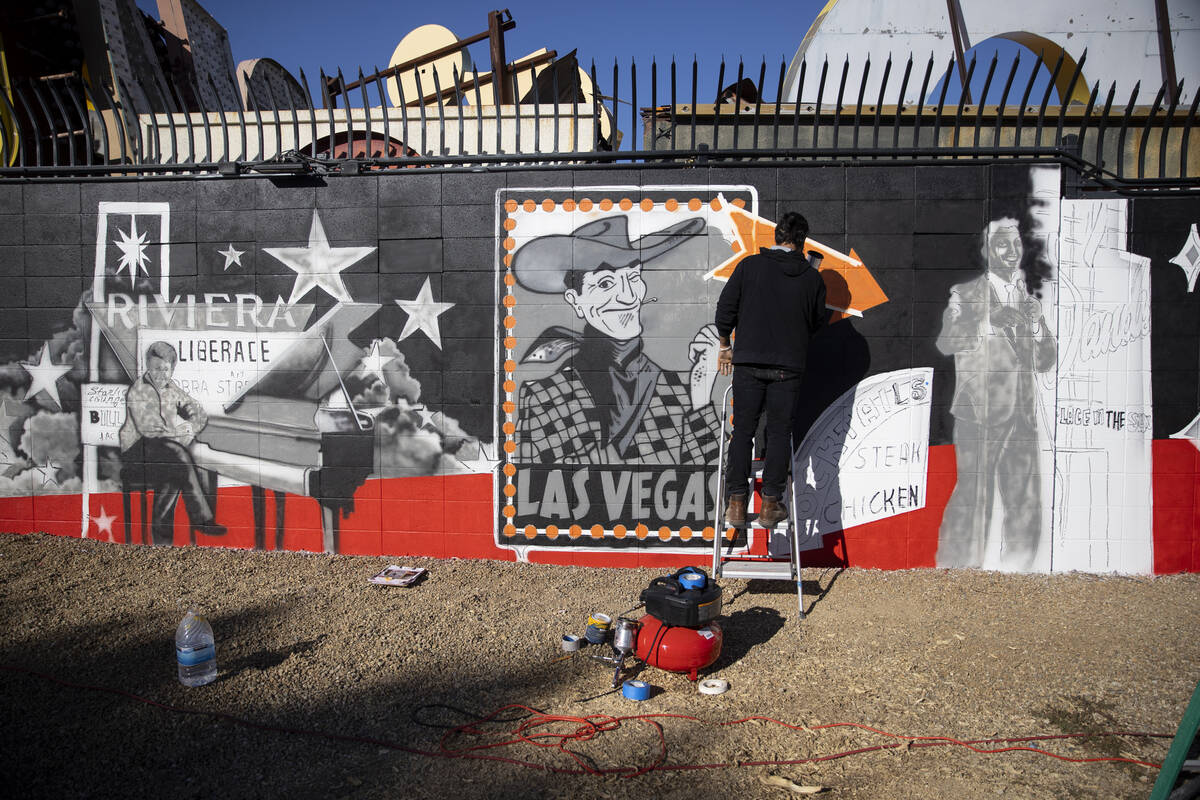 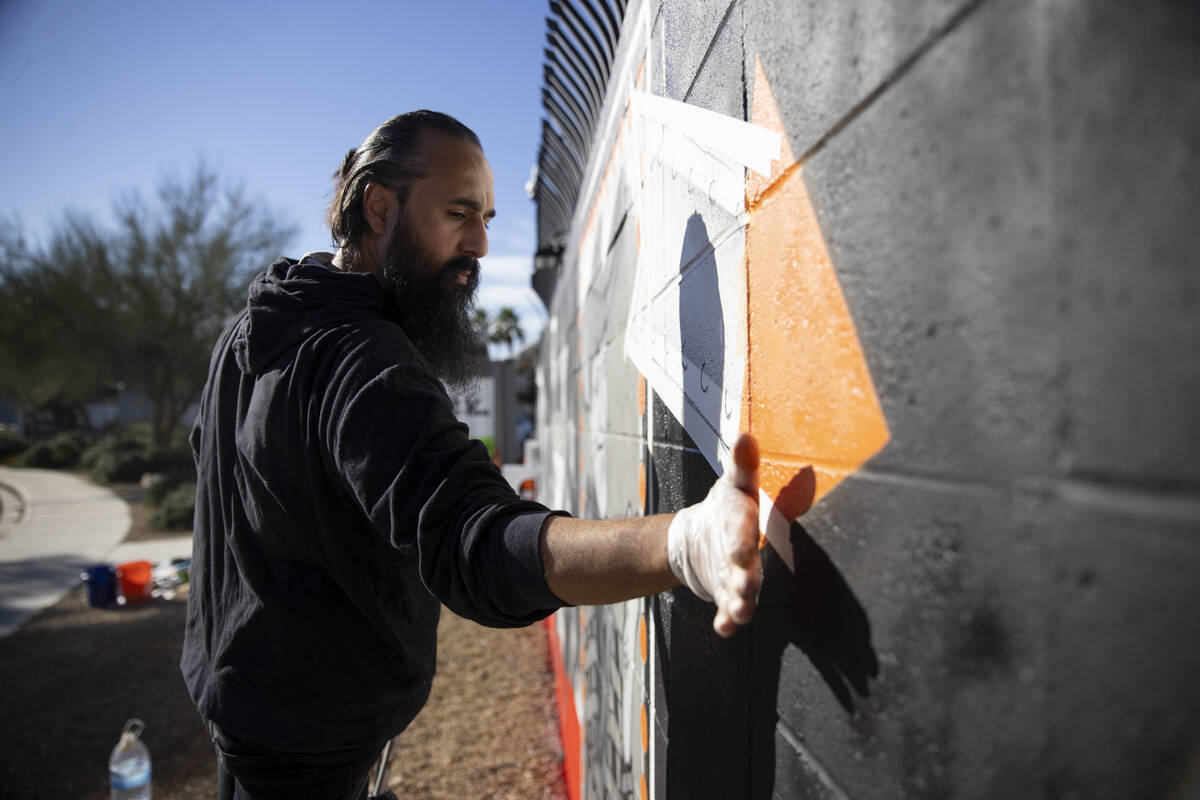 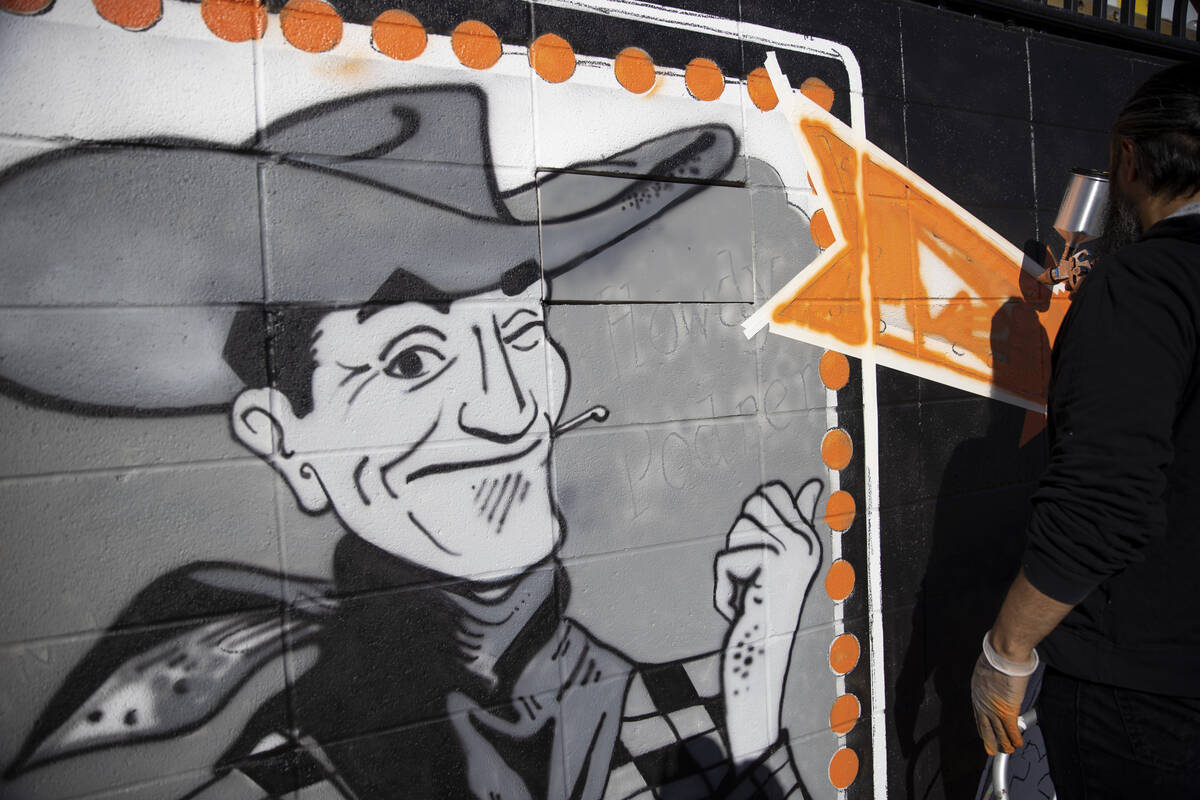 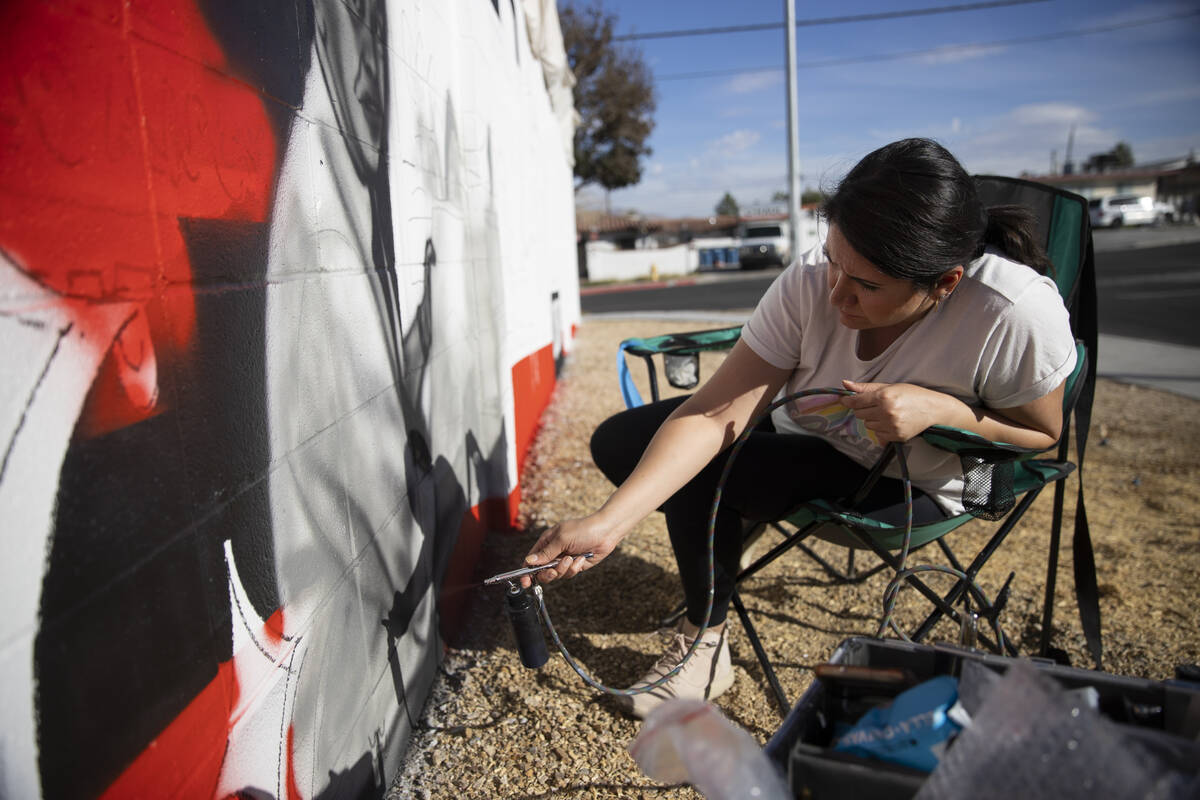 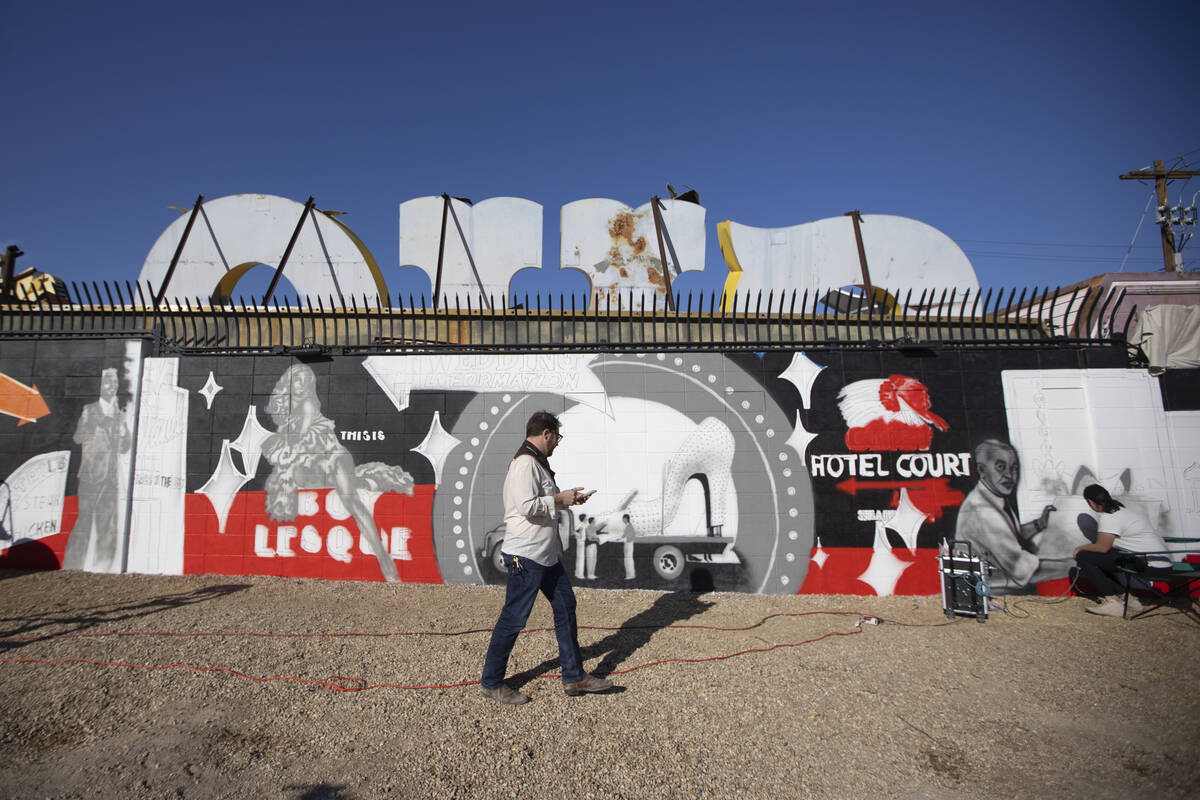 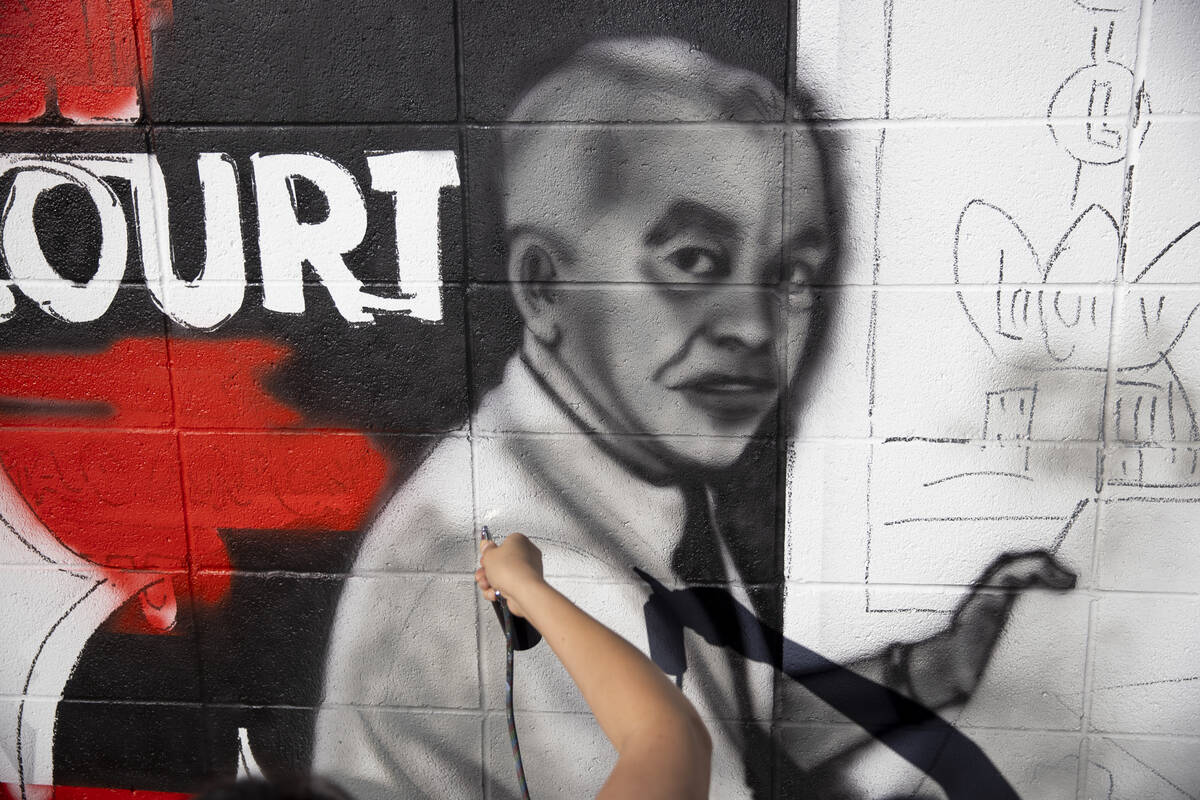 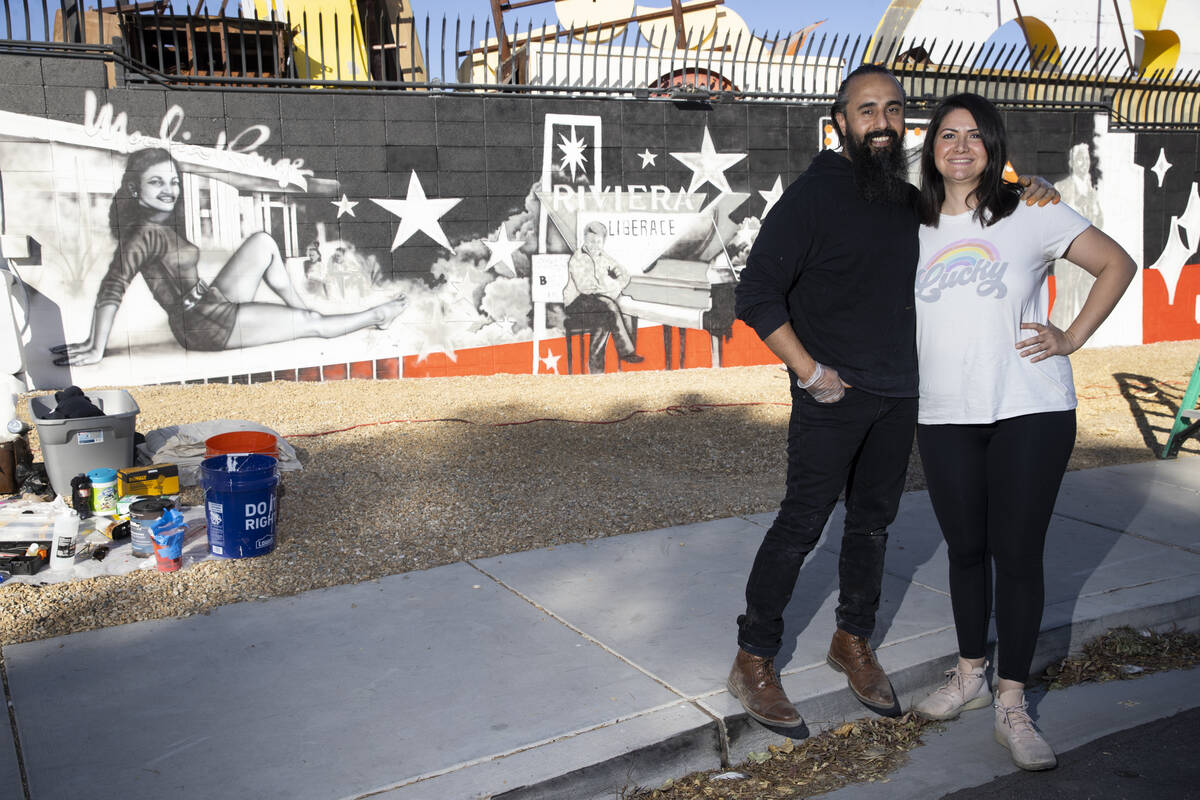 Ali Fathollahi, left, and wife Nanda Sharifpour pose for a portrait in front of a mural they are working on outside of the Neon Museum North Gallery in Las Vegas, Tuesday, Nov. 23, 2021. (Erik Verduzco / Las Vegas Review-Journal) @Erik_Verduzco

Liberace and Sammy Davis Jr.? Everybody knows about the impact they had on Las Vegas.

But Kenny Kerr, Theodora Boyd, Paul Revere Williams and Betty Willis? Or Oscar Gonzalez, Denise Scott Brown and Raul Rodriguez? They’re cultural groundbreakers, too, even if learning about their accomplishments might require a deeper dive into local history than most Southern Nevadans usually take.

Luckily, the Neon Museum has done the research and is honoring these pioneers — and a few less-animate ones — on a new mural, “Las Vegas Luminaries,” scheduled for completion in mid-December.

The 808-square-foot mural — which appears on the south wall of the museum’s North Gallery — will act as a sort of pre-show appetizer for patrons waiting to catch the museum’s “Brilliant!” show, which is to premiere a music and video update in mid-December. But the mural also will be Southern Nevada’s latest piece of public art, viewable by anyone, anytime and at no charge.

Aaron Berger, the museum’s executive director, says the groundbreakers featured on the mural were selected with an eye toward highlighting diverse, underrepresented communities and lesser-known people who helped shape Las Vegas’ cultural history.

The mural includes Liberace and Davis, both of whom broke ground in Las Vegas’ entertainment industry. But there’s also Boyd, an African American showgirl who performed at the Moulin Rouge, and Kerr, whose female impersonator show, “Boylesque,” ran for years here and who was an early advocate of AIDS research and the city’s LGBTQ community, according to the museum.

The mural also depicts Willis, who was one of few women working in the commercial sign industry in the 1950s when she designed the now-iconic “Welcome to Fabulous Las Vegas” sign, the museum notes; and African American architect Williams, whose work here included the La Concha Motel (its lobby now serves as the Neon Museum’s visitor center).

Two literal icons also found spots on the mural: neon cowboy pitchman Vegas Vic, who helped market Las Vegas to the world, and the Chief Hotel Court sign. The latter “is a reminder of the misuse of Native imagery for profit that stood in stark contrast to local Paiute tribes who at the time of the sign’s design went without power and other basic needs on Vegas-area reservations,” the museum notes.

The mural also pays tribute to the art form the museum honors with its portraits of Gonzalez, a Mexican American neon bender whose work can be seen throughout the valley; Scott Brown, an architect and co-author of “Learning From Las Vegas,” a seminal study of Vegas architecture and signs; and Rodriguez, an artist who “designed the iconic pink signage” for the Flamingo, according to the museum.

The mural incorporates images of classic Las Vegas signs, some of which are in the museum’s collection. Viewers who wish to learn more about the mural’s honorees will be able to access information with a QR code.

“Now, the North Gallery, which houses ‘Brilliant!,’ can (offer) an educational experience, and the mural is a key component to that,” Berger says.

The museum asked married artists Nanda Sharif pour and Ali Fathollahi, who came to the United States from Iran in 2012, to design and create the mural. “Some of them are very well known,” Sharif pour says of the mural’s subjects, “but I learned a lot when I was introduced to these people I didn’t know about. So, I think this has very important educational and cultural value.”

Her favorite honorees? “I might be a little biased here, but I’m very interested in female figures, just because I have always liked to feature female characters in my painting,” Sharif pour says.

In 2020, some members of the local arts community publicly questioned the museum’s commitment to diversity and inclusiveness. The organization denied those assertions.

Berger, who became the museum’s director about four months ago, says he doesn’t feel qualified to comment on that episode. “But I can tell you (the mural project) was not driven by the past. This is solely … a reflection of who we are as an organization and recognizing who we serve as an audience.

“The museum wants to embrace its diverse audience, and that ranges in (diversity of) nationality, ethnicity and gender identity. Those are values that the board embraced and were looking for in a director, and those are values I hold dear.”

The mural “is about recognizing that our community … is a diverse one, and we have to be a museum where people see themselves in our programs,” Berger says.

Stephen Siwinski, the museum’s project manager, agrees that the mural’s aim is to “shine a light onto our diverse community and folks that have contributed to our cultural scene.”

But, he adds, “there is not enough wall in Las Vegas for us to do a mural that would include all of the people who made us who we are today. If we had enough wall we could say thank you to every housekeeper, we could say thank you to every valet. We hope those people can come here and start a conversation about what it means to be a Las Vegas luminary.”

Berger says the mural is “the first of many steps we’re going to be taking to highlight key people who made a significant difference in Las Vegas but may not be well-known.”

And if you’re irked that your favorite notable wasn’t included? Berger wants to hear from you, too. Museums should be “dialogue starters, and a place where conversations begin,” he says. “I love that. I welcome that. I hope people on social media (suggest) who should be included on Mural 2.0.”