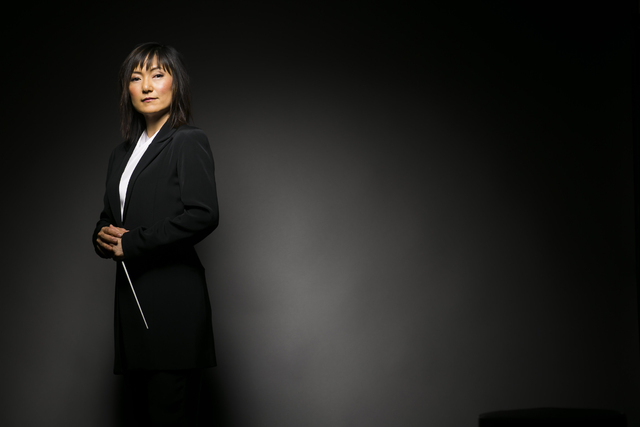 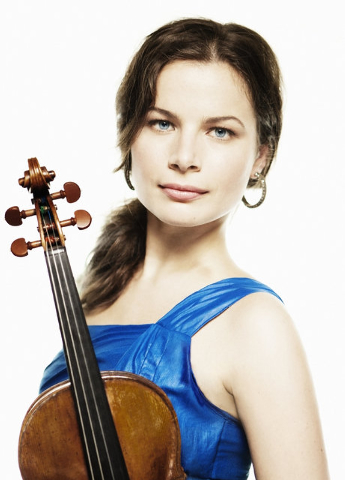 One was born in Bulgaria. One comes from Chicago.

Both, not surprisingly, pursued musical careers.

It’s Hotoda’s second chance to conduct the Philharmonic at The Smith Center; last year, she led the orchestra’s annual Youth Concert Series, a week she describes as “a wonderful time.”

And although she’s never worked with Hristova, Hotoda’s well aware of the violinist’s talents.

“She’s got the flash,” the conductor says of Hristova, “and there’s room for that, but there’s also a beautiful, soulful quality to her playing.”

Hristova, for her part, has “heard wonderful things” about Hotoda — and about the Las Vegas Philharmonic, thanks to two friends’ previous experiences. (Fellow violinist Elena Urioste performed at last year’s “Rising Star” concert and Sarah Hicks conducted the Philharmonic in May.)

And although Hristova hasn’t performed in Las Vegas before, she’s definitely played here.

“I love Las Vegas so much — I’m so happy to be coming there,” she says in a telephone interview. “I love all the lights. I know it sounds cheesy.”

Equally loved, but decidedly less cheesy: Bruch’s Violin Concerto No. 1, which Hristova will perform with the Philharmonic Saturday night.

“It’s a really fun violin piece to play,” she notes, because “there’s a lot of excitement and a lot of dazzle — which is appropriate for Las Vegas.”

But Hristova also cites the concerto’s slow movement and the images it conjures in her mind: “a couple growing old together, sitting by the fire.”

Although “it’s difficult,” the violinist doesn’t consider the concerto “a technical challenge,” in part because “it’s really well written for the violin. That does make a difference.”

And because she’s so familiar with it, “you feel more confident” in performing it, Hristova says, “so you can focus on the interpretation.”

Hotoda, however, has never conducted this particular concerto and “it’s great to have a piece you’ve never done before,” she says.

“Sometimes it’s harder to do something over and over again, because you lose that intensity,” Hotoda says. “The first time, it’s so fresh. There’s an electricity.”

And that’s part of the fun, the conductor maintains in a separate telephone interview.

“There’s so much that happens onstage,” she notes, citing the “exciting synergy” that occurs between orchestra and soloist. “We really play off each other. The orchestra creates so much drama for her. It’s a wonderful, indescribable connection.”

Hotoda designed Saturday’s program to be “a concert the whole family can enjoy” together, especially “after the craziness of the holidays.”

Ravel originally wrote the suite as a piano duet for the children of friends, but Philharmonic audiences will hear an orchestrated version that provided accompaniment for a subsequent ballet.

Rounding out the program: Dvorak’s Symphony No. 8, which Hotoda describes as one of the composer’s “most accessible” works.

“When I was a senior in high school, I played first violin,” the conductor says, “and I remember playing this piece,” especially “the last movement, and thinking it was so much fun to play.”

Written in “the bucolic setting” of an Iowa small town, the symphony shows the Czech-born Dvorak creating memorable melodies inspired by folk dances from his native land, Hotoda says. “It just poured out of him.”

And while Dvorak may not occupy the same rarefied place in the musical pantheon as Beethoven, Bach or Mozart, “his music has so much to say,” Hotoda adds. “It draws you in.”

Classical music certainly drew Hotoda, who “grew up in an artistic household” in the Chicago neighborhood known as Wrigleyville, for its proximity to the friendly confines of Wrigley Field. (Maybe next year, Hotoda says of the perennially hapless Chicago Cubs’ chances for a pennant.)

Hotoda’s mother was a vocal major and music educator; her father was “a sculptor and painter” who “had classical music blaring all the time,” so “I was constantly bombarded with classical music.”

And with a mother she described as “the ultimate stage mom — a ‘tiger mom’ for sure,” Hotoda wound up participating in classical music competitions from an early age.

All the exposure paid off; in addition to the Las Vegas Philharmonic, Hotoda’s conducted symphony orchestras from Baltimore to Toronto to Dallas, where she spent three years as assistant conductor. In September, she takes over as the Utah Symphony’s new associate conductor.

Hristova’s father was a Russian composer and her mother played the piano.

Hristova wanted to play piano, too, but “I really didn’t have much of a choice” about twice-a-week violin lessons that made it “clear to my mom” that, at age 6, she had found her instrument.

At 13, Hristova came to the U.S., “kind of like an exchange student,” and by 17 she was studying at Philadelphia’s Curtis Institute. After receiving an advanced degree from Indiana University, Hristova has played solo, recital and chamber performances from New York to New Zealand, winning a 2013 Avery Fisher Career Grant and several other prizes along the way.

Her musical partner: a 1655 violin made by Nicolo Amati — whose pupils included another legendary violin maker, Andrea Guarneri.

The instrument is “on loan to me” from “a very generous individual — I feel very fortunate and lucky to have it,” Hristova says of her Amati, which was owned by the late Louis Krasner, a champion of 20th-century music who premiered violin concertos by Alban Berg and Arnold Schoenberg.

Hristova’s played the violin for more than 10 years and “I know how it reacts,” she says. “And there’s a factor in performing,” noting the “really rich and deep sound” it produces. “It’s a melding of our personalities.”

It’s also the reason Hristova “can never bring a carry-on” when she travels by air, because her violin is always her carry-on.

“Traveling is the hardest part,” the violinist says. “The concertizing and the music make up for it.”