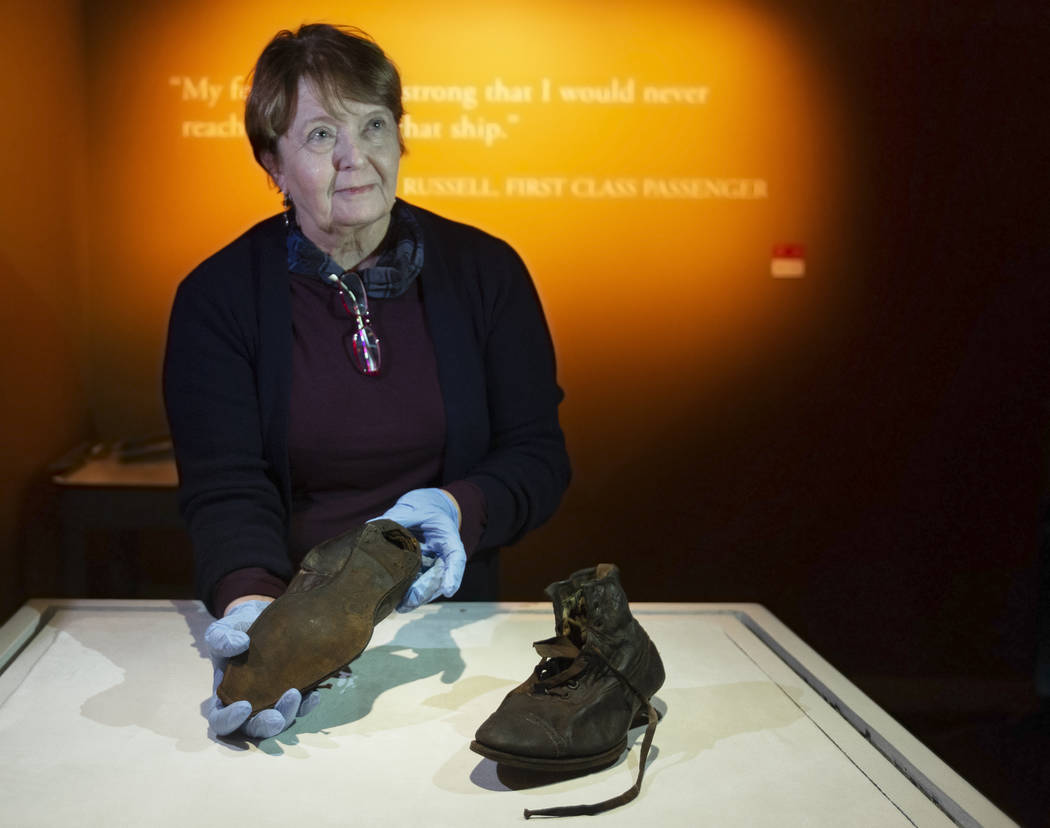 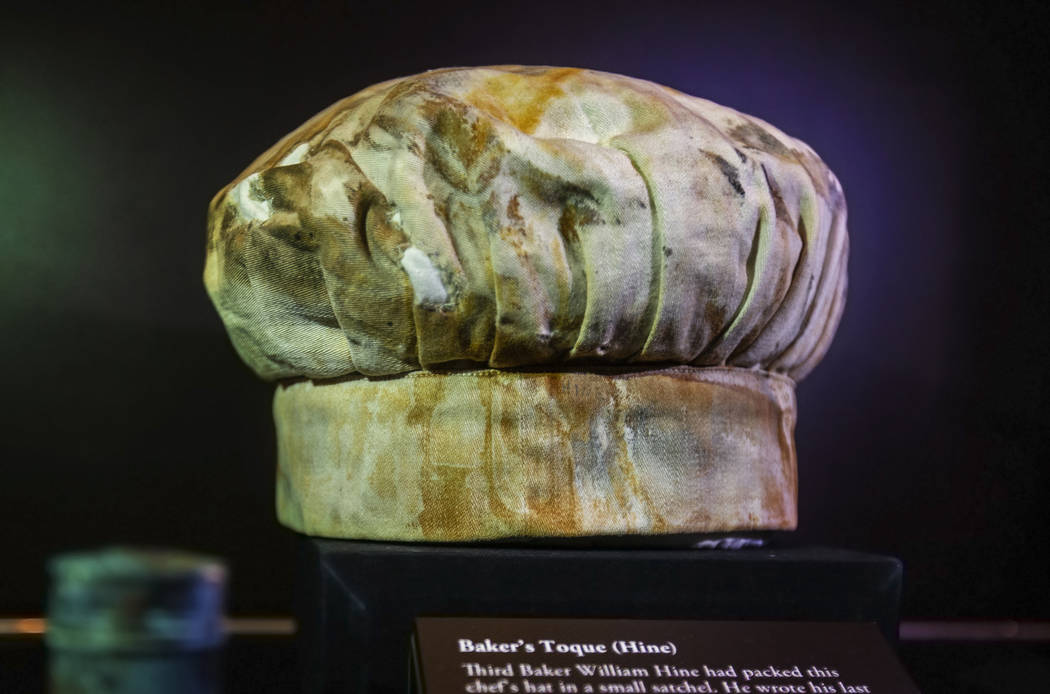 A chef's hat owned by William Hine, a baker on the Titanic, on Thursday, Jan. 9, 2020, at Titanic: The Artifact Exhibition, at Luxor, in Las Vegas. (Benjamin Hager/Las Vegas Review-Journal) @benjaminhphoto 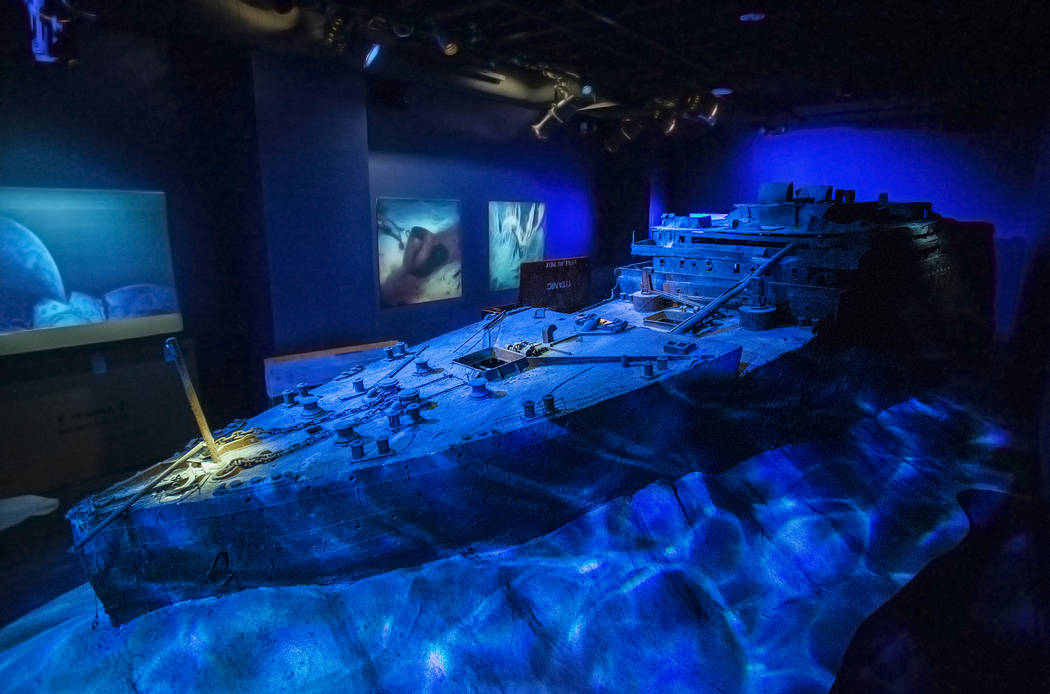 A model of the Titanic on Thursday, Jan. 9, 2020, at Titanic: The Artifact Exhibition, at Luxor, in Las Vegas. (Benjamin Hager/Las Vegas Review-Journal) @benjaminhphoto 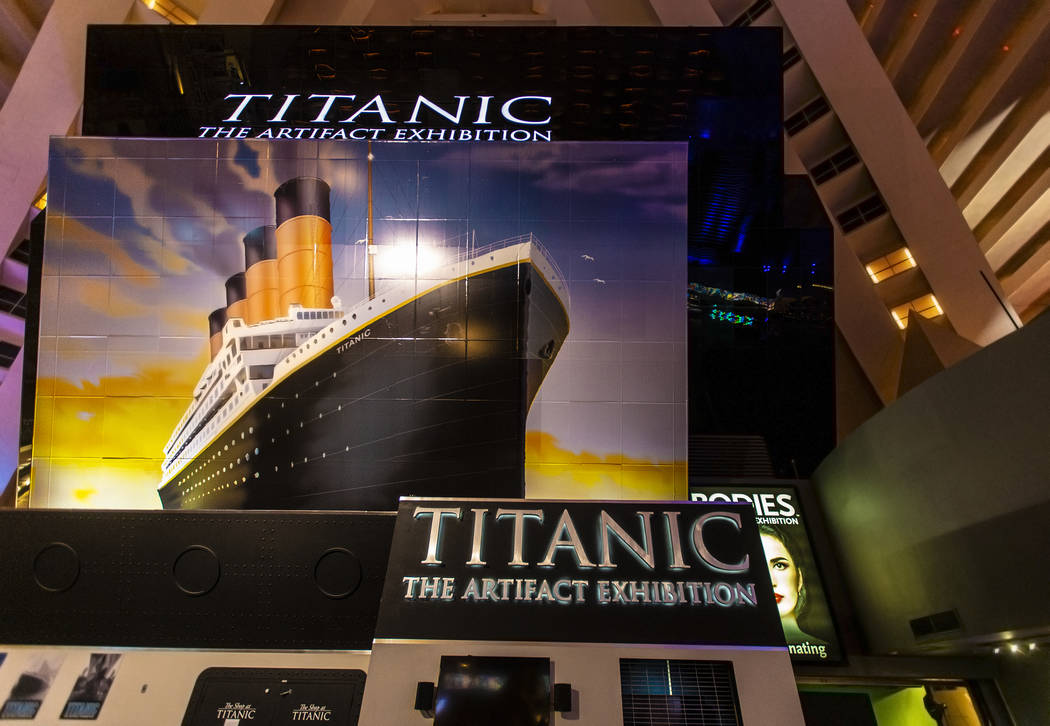 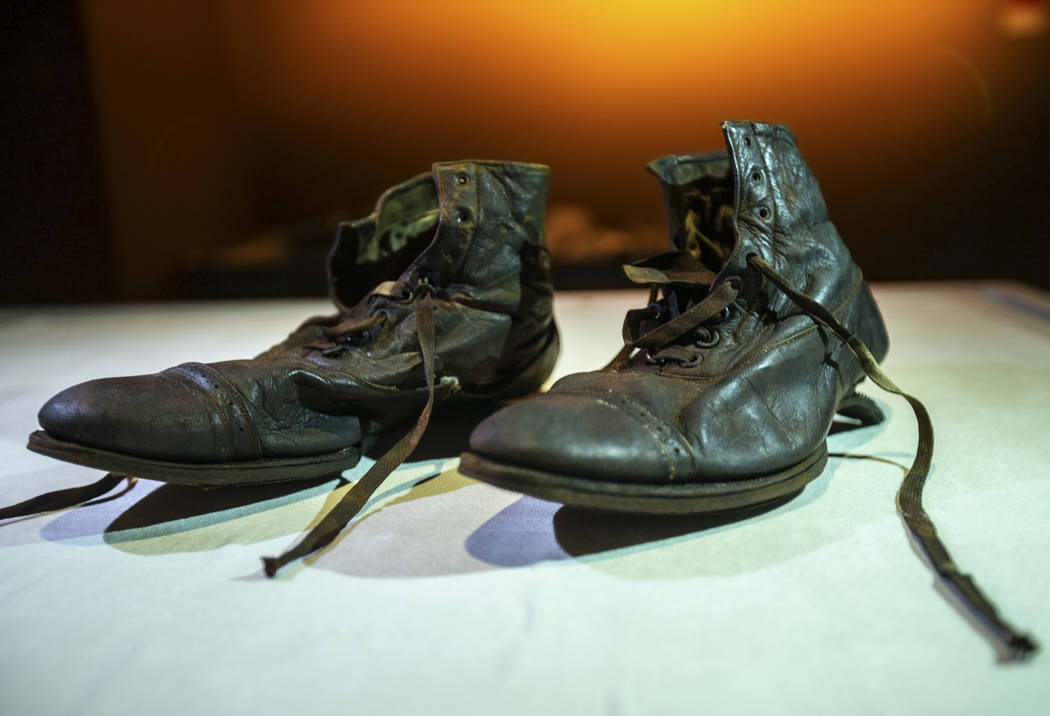 A pair of dress boots worn by William Henry Allen, a third-class passenger on the Titanic, on Thursday, Jan. 9, 2020, at Titanic: The Artifact Exhibition, at Luxor, in Las Vegas. (Benjamin Hager/Las Vegas Review-Journal) @benjaminhphoto 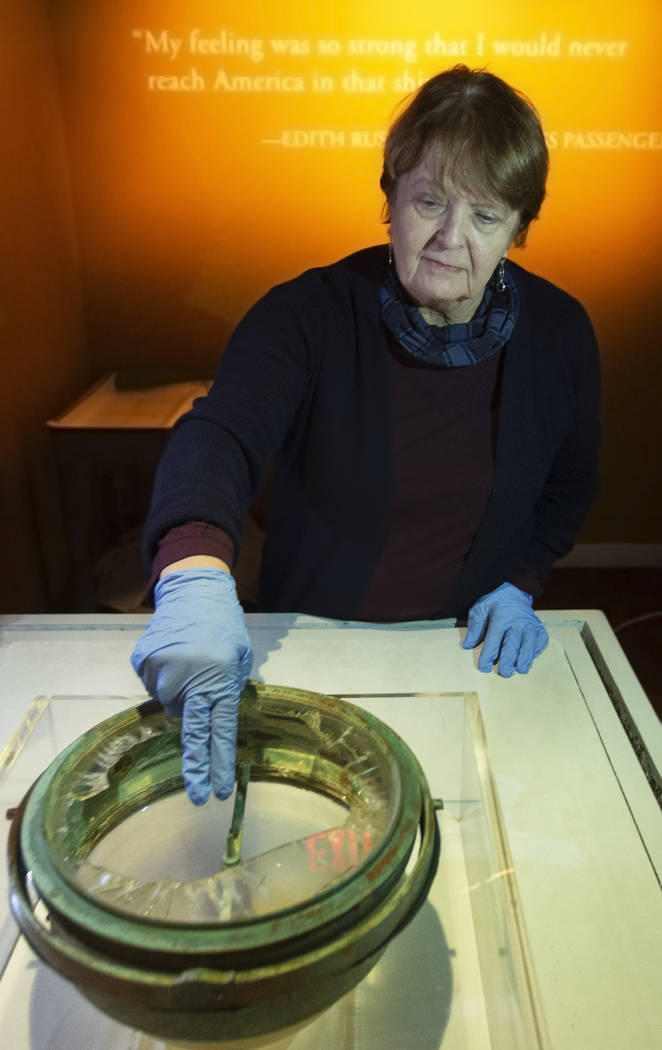 Alexandra Klingelhofer, executive director for collections, points out features of a ship compass recovered from the Titanic on Thursday, Jan. 9, 2020, at Titanic: The Artifact Exhibition, at Luxor, in Las Vegas. (Benjamin Hager/Las Vegas Review-Journal) @benjaminhphoto 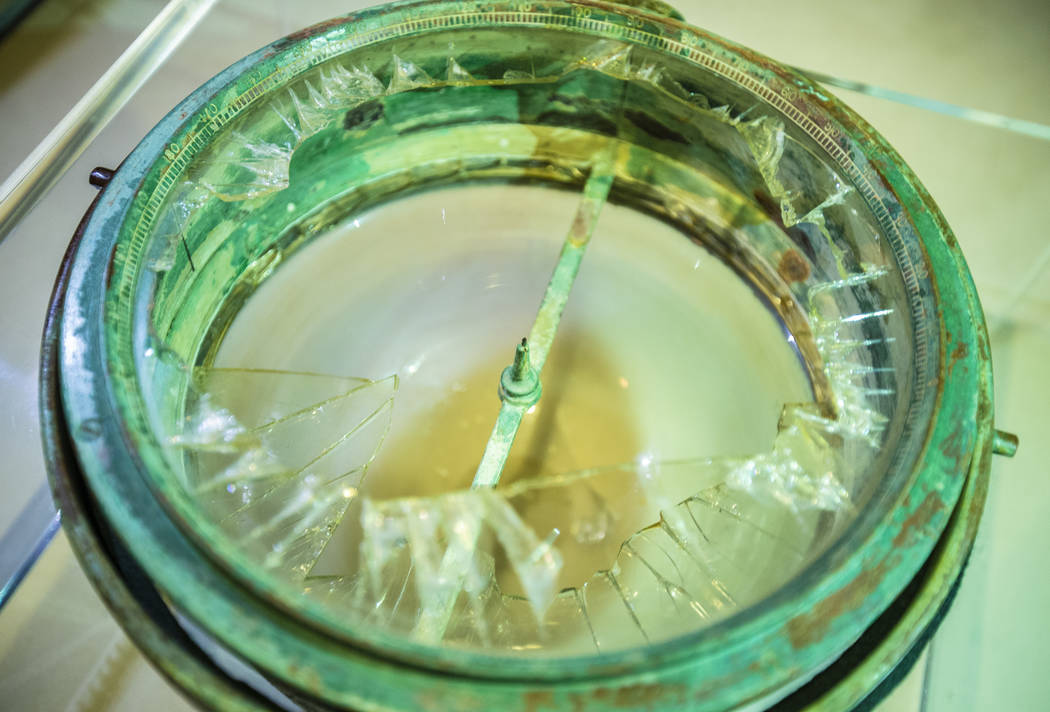 A ship compass recovered from the Titanic on Thursday, Jan. 9, 2020, at Titanic: The Artifact Exhibition, at Luxor, in Las Vegas. (Benjamin Hager/Las Vegas Review-Journal) @benjaminhphoto 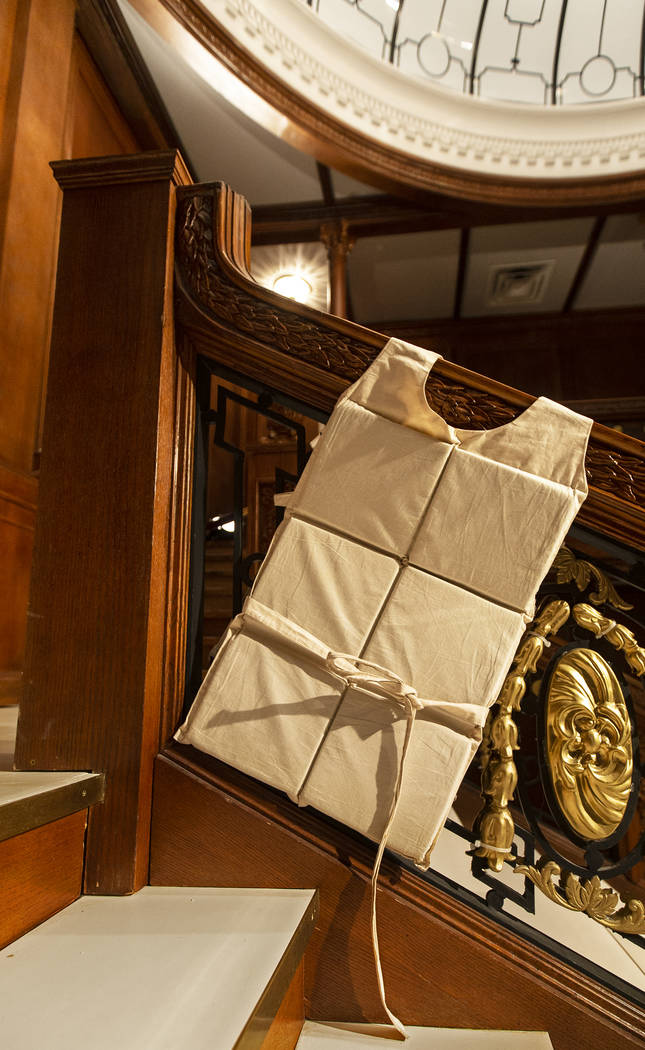 An authentic life vest recovered from the Titanic on Thursday, Jan. 9, 2020, at Titanic: The Artifact Exhibition, at Luxor, in Las Vegas. (Benjamin Hager/Las Vegas Review-Journal) @benjaminhphoto 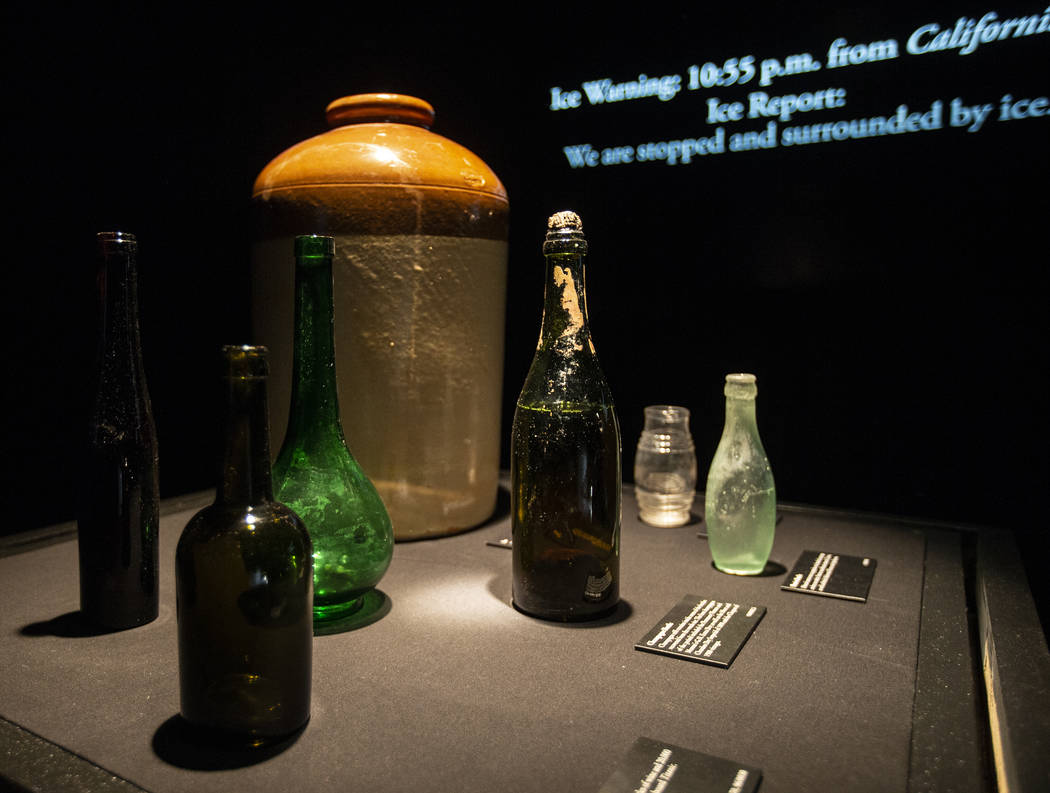 Various bottles found in the debris of the Titanic on Thursday, Jan. 9, 2020, at Titanic: The Artifact Exhibition, at Luxor, in Las Vegas. (Benjamin Hager/Las Vegas Review-Journal) @benjaminhphoto 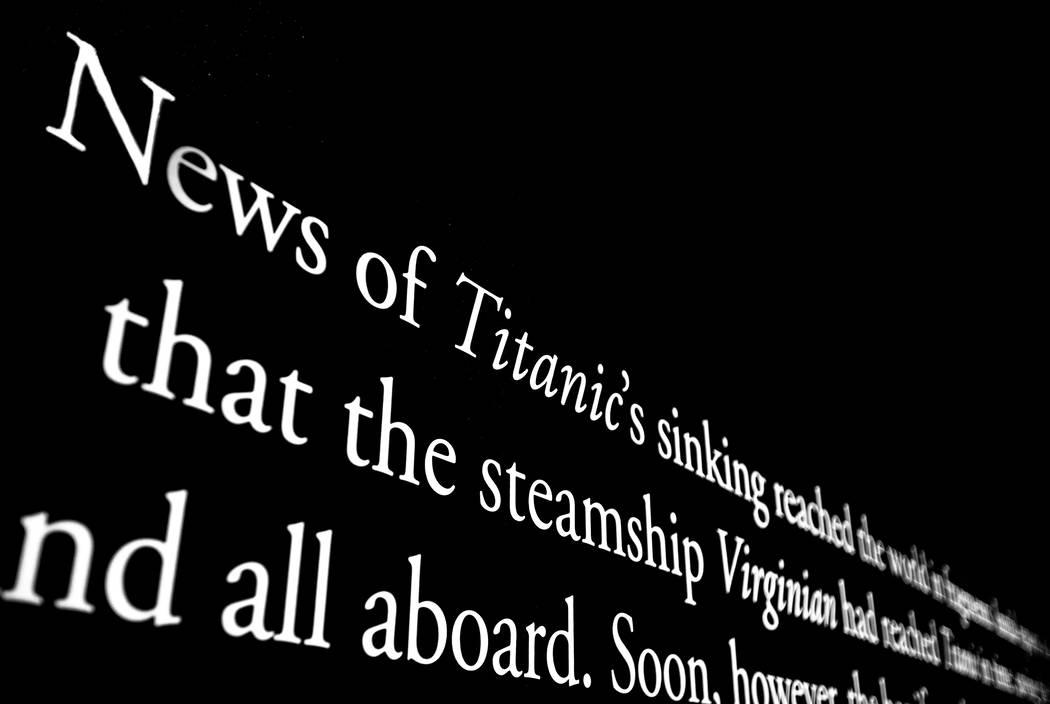 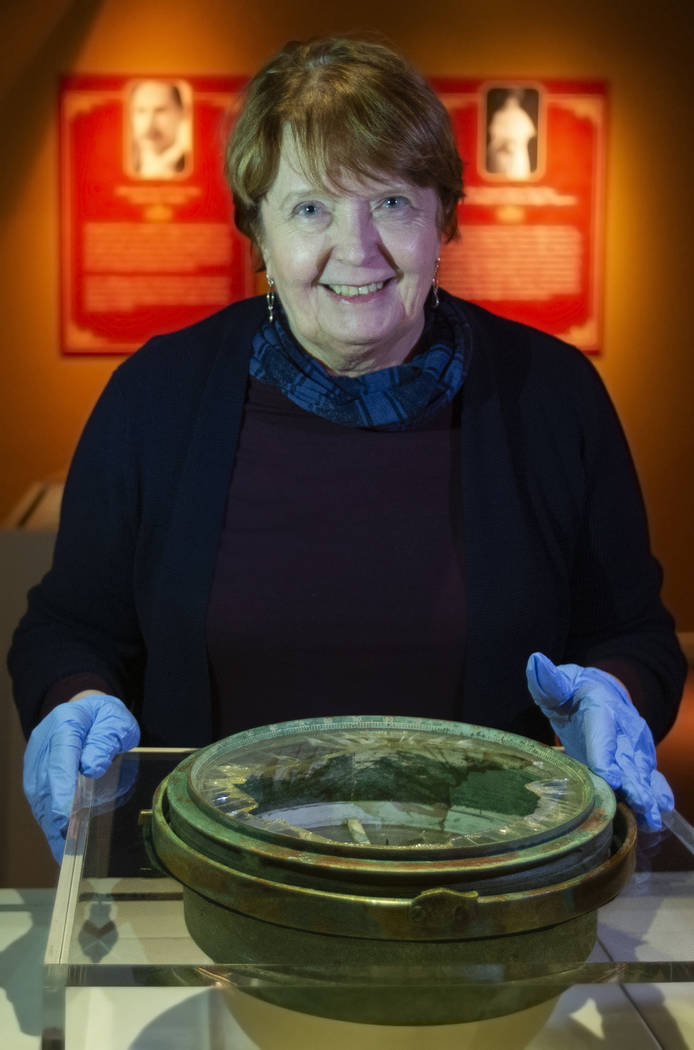 Alexandra Klingelhofer, executive director for collections, with a ship compass recovered from the Titanic on Thursday, Jan. 9, 2020, at Titanic: The Artifact Exhibition, at Luxor, in Las Vegas. (Benjamin Hager/Las Vegas Review-Journal) @benjaminhphoto

When the unsinkable ship struck an iceberg in the North Atlantic, a 39-year-old passenger named William Henry Allen was one of the more than 2,200 on board.

He died in the sinking of the Titanic and his body was never recovered, but many of his belongings — letters, clothing, a pair of boots — were. And those items help to preserve the story of a toolmaker who left his wife, family and home in England to sail for America in search of new work.

“Titanic: The Artifact Exhibition” at Luxor is introducing 108 new artifacts — including 20 that have never been displayed.

“With the beginning of a new decade, we’re doing a larger overhaul,” says Alex Klingelhofer, executive director of collections for Experiential Media Group, which produces the exhibition. “That way, we get a fresh look at the Titanic passengers and crew.”

The personal belongings of the Titanic’s first passengers have survived a journey that began in Southampton, England, and could have ended 2½ miles below the ocean’s surface.

Among the several artifacts that have been recovered is Allen’s suitcase. Its leather binding preserved 150 letters, documents and articles of clothing, including a pair of boots that are new to the collection.

“What do people take with them? It says a lot about their lives,” Klingelhofer suggests. “He was married. He had personality — he had exciting clothing like a polka-dotted scarf. When you’re lucky enough to find a suitcase, it helps you understand the person more, what’s important to them.”

Klingelhofer explains that EMG, which also produces “Bodies: The Exhibition,” is the only company with sovereign possession of the Titanic wreck site.

Between 1987 and 2004, EMG undertook seven expeditions to retrieve artifacts from where they first sank in April 1912.

At the exhibition’s entrance, visitors can spot another new item, a miniature model of a Nautile submersible that three crew members would pilot into the Titanic’s ruins.

About 14 years ago, the Nautile recovered a small bag belonging to William Edward Hine, one of the more than 1,500 people who died in the disaster.

The bag carried a few of his possessions, including a chef’s toque.

“So there were a few other things in the bag with this. Obviously this hat was a backup because it was in his bag, not where he was using it,” Klingelhofer says. “We found this shaving stick. He was a baker so he would have needed to be clean-shaven.”

Other new artifacts joining the collection include a first-class smoking room chandelier, an alligator skin wallet and a dining plate that has gathered concrete-like sediment from the ocean floor.

Starting Monday, visitors will be permitted to take photographs within the exhibit for the first time, including on a mock balcony where they can pose wearing prop life jackets from the 1997 movie.

Despite the decades since the disaster occurred, and was later memorialized in film, Klingelhofer says it continues to compel new audiences.

“It’s a unique story,” she says. “The maiden voyage was not expected to sink. It did. Due to the telegraph, people in the water within a 50-mile radius were learning as it was happening. And one survivor, Dorothy Gibson, was a silent movie star. Her studio had her do a movie about it within 30 days.”

Nearly 20 movies have since been made canonizing the events of the sinking.

“It has never not been on the public mind,” Klingelhofer says. “It’s a story about all human frailties and dignities. It resonates with people.”