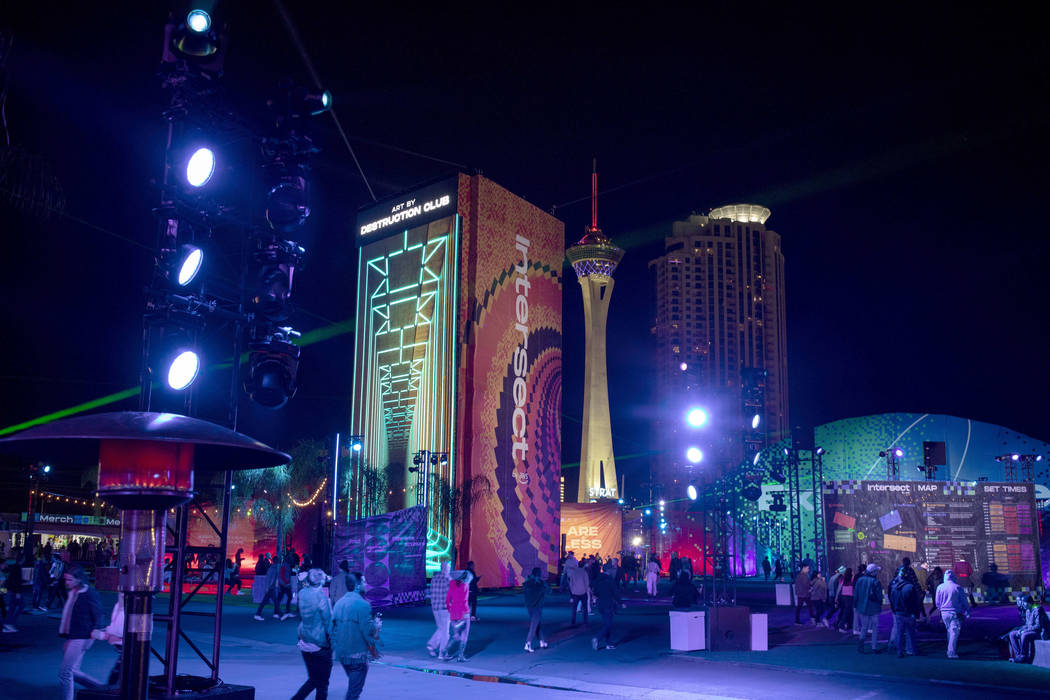 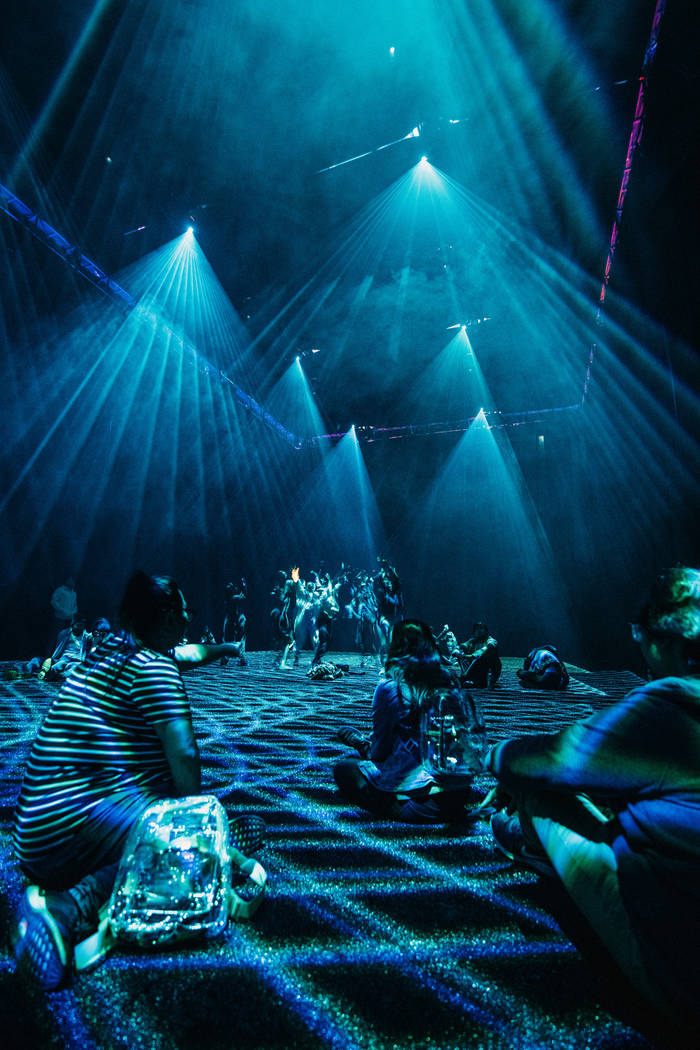 "Lost and Photon" by Zach Camp 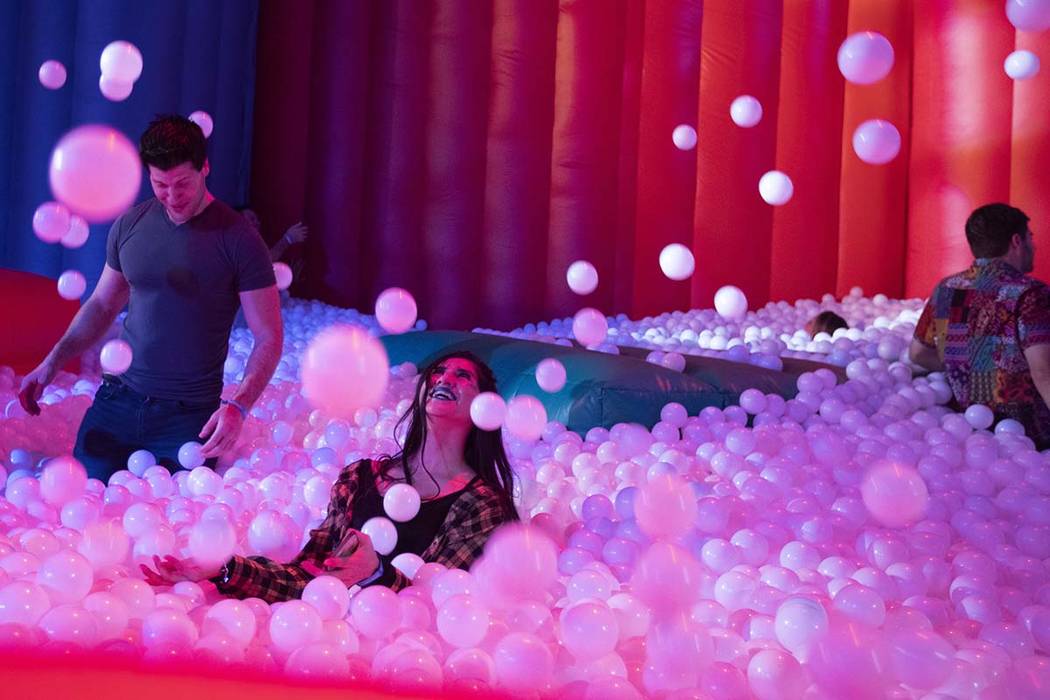 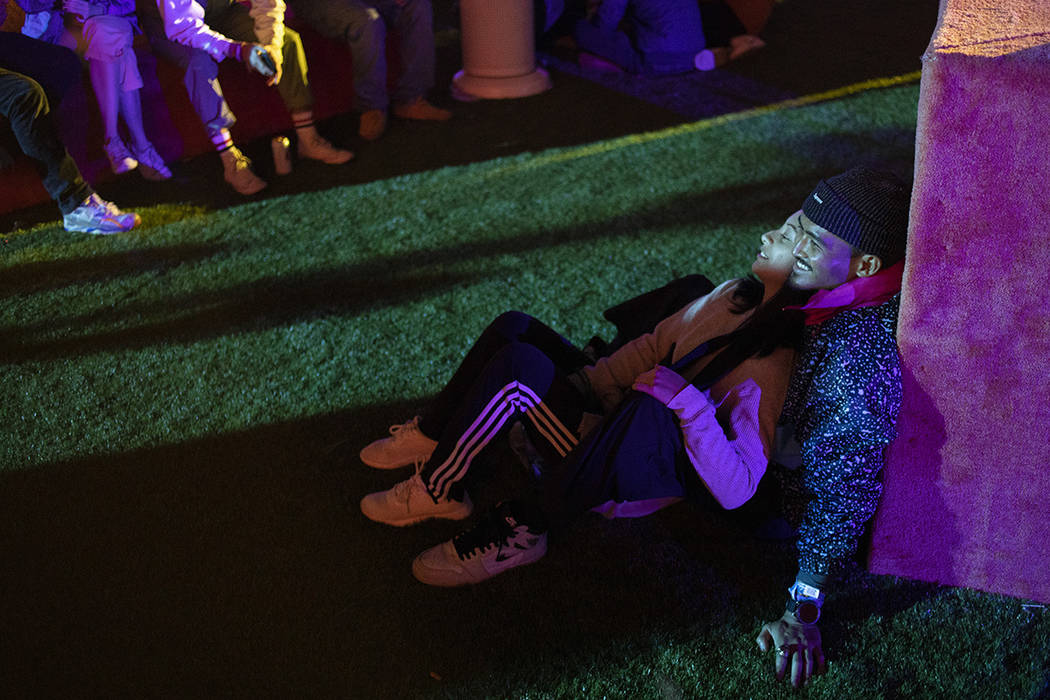 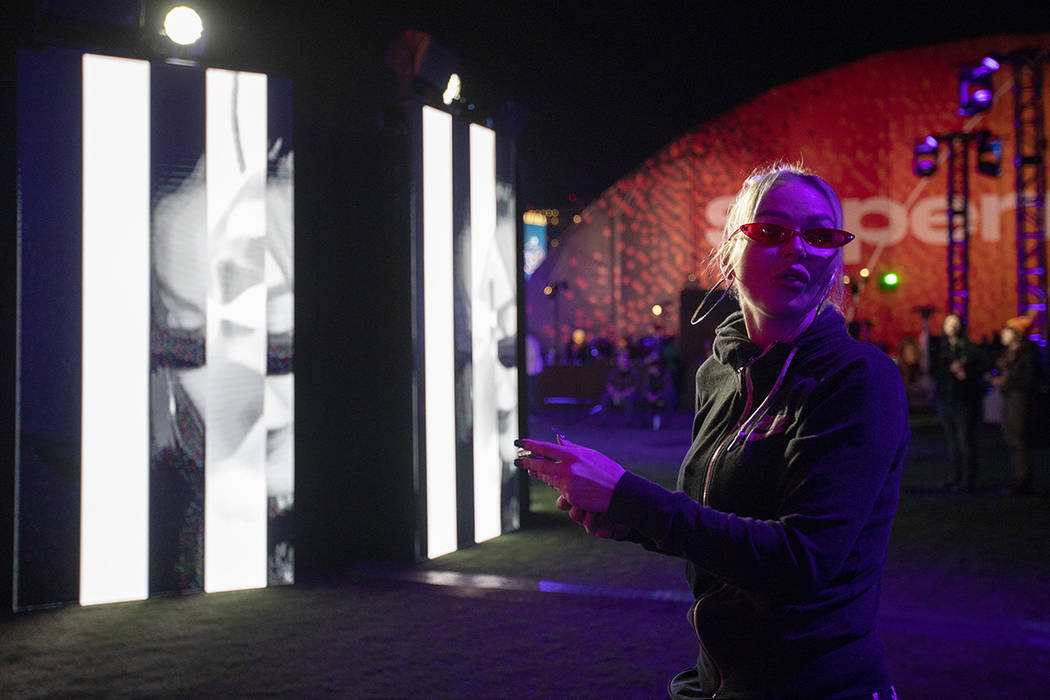 Amanda Duron of Oregon looks back to tell her friend "how cool" the art installation by Tigrelab is on Saturday, Dec. 7, 2019, at Intersect Music Festival in Las Vegas. (Ellen Schmidt/Las Vegas Review-Journal) @ellenkschmidt_ 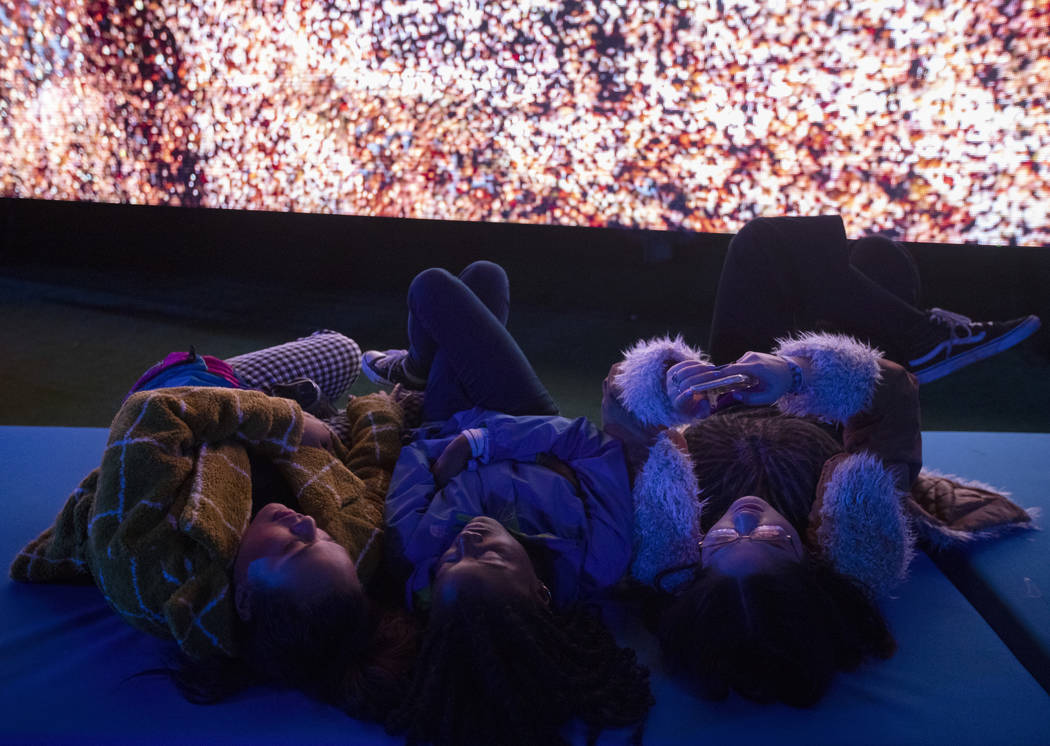 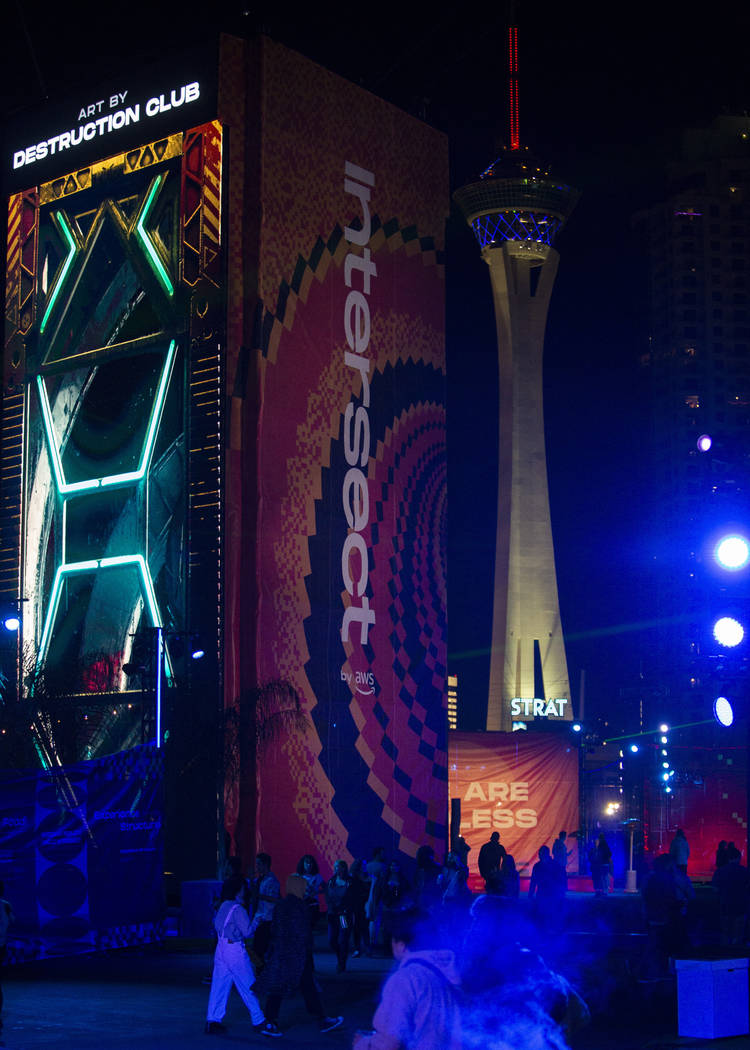 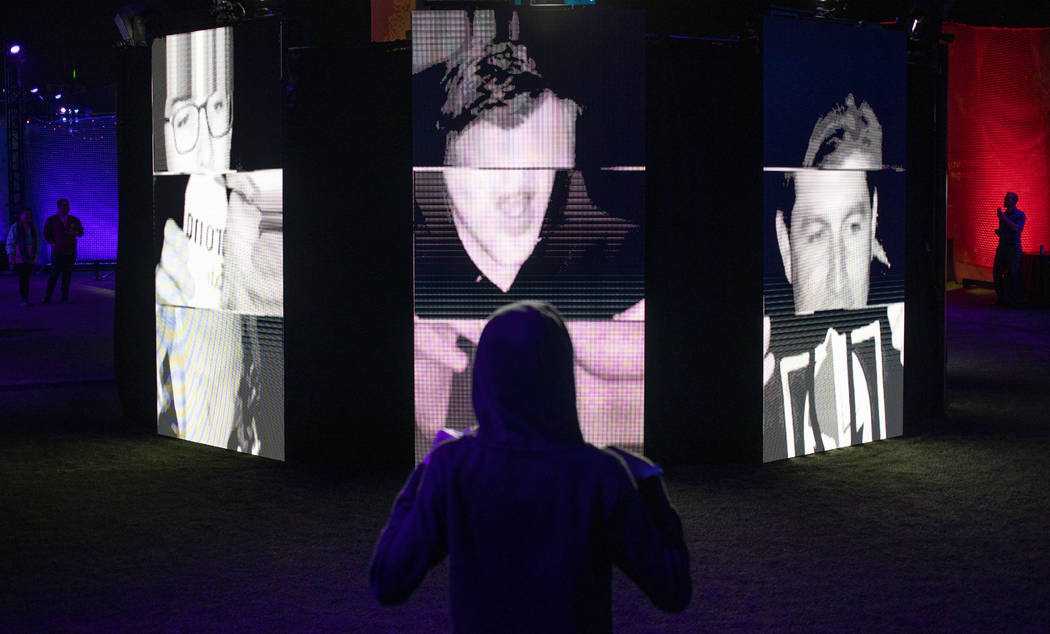 Luke Yeager, 15, of Las Vegas, views the "I Am Therefore I Am" art installation at Intersect Festival on Friday, Dec. 6, 2019, in Las Vegas. The piece records people and returns a composite video image using all of the people standing around the 360 degree screen display.(Ellen Schmidt/Las Vegas Review-Journal) @ellenkschmidt_ 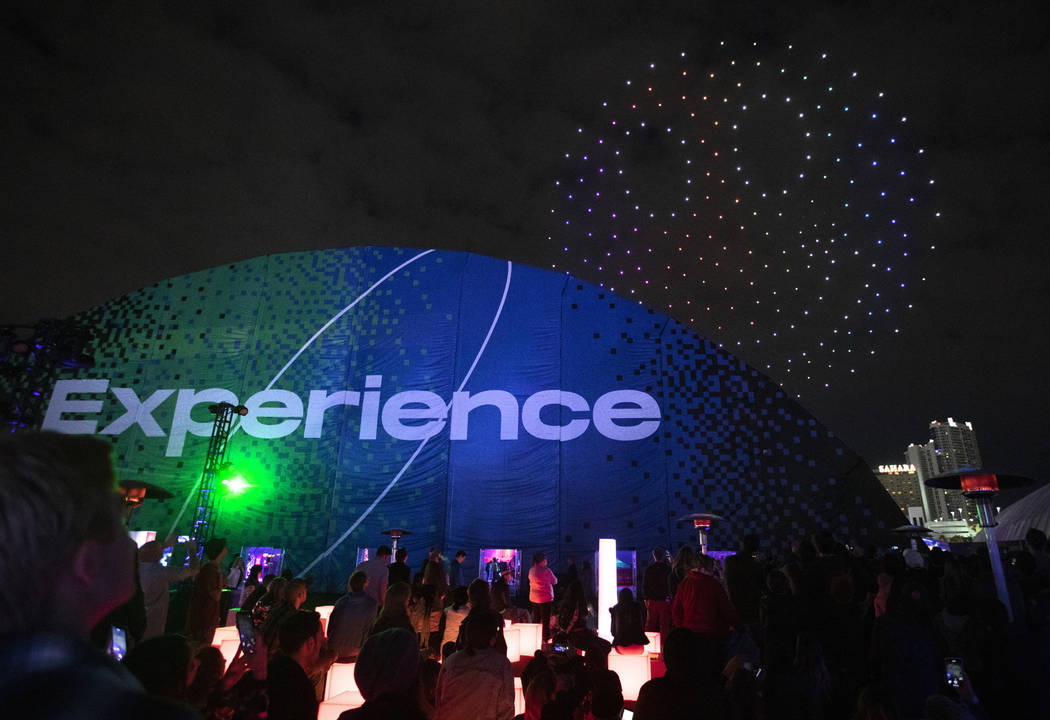 A drone performance with more than 500 drones is watched by the audience to the tune of Kacey Musgraves' music at Intersect Festival on Friday, Dec. 6, 2019, in Las Vegas. (Ellen Schmidt/Las Vegas Review-Journal) @ellenkschmidt_ 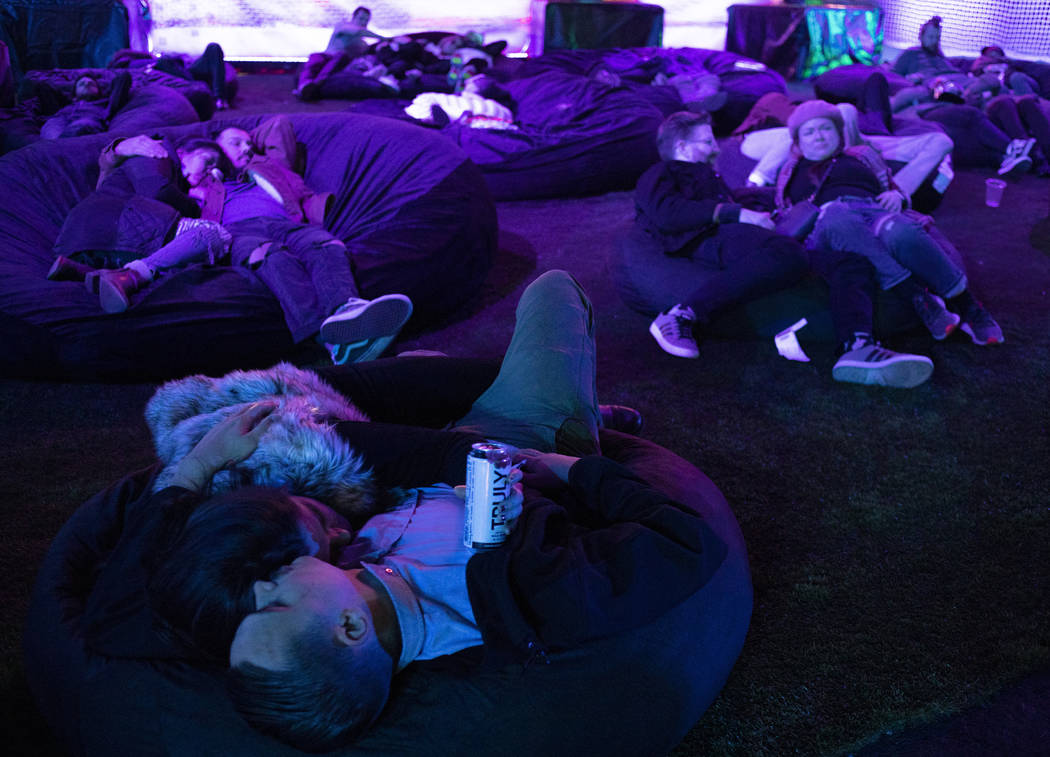 Festival attendees rest in bean bag chairs at Intersect Festival on Friday, Dec. 6, 2019, in Las Vegas. The drone shows and "The Monolith" video tower could be seen from their place. (Ellen Schmidt/Las Vegas Review-Journal) @ellenkschmidt_ 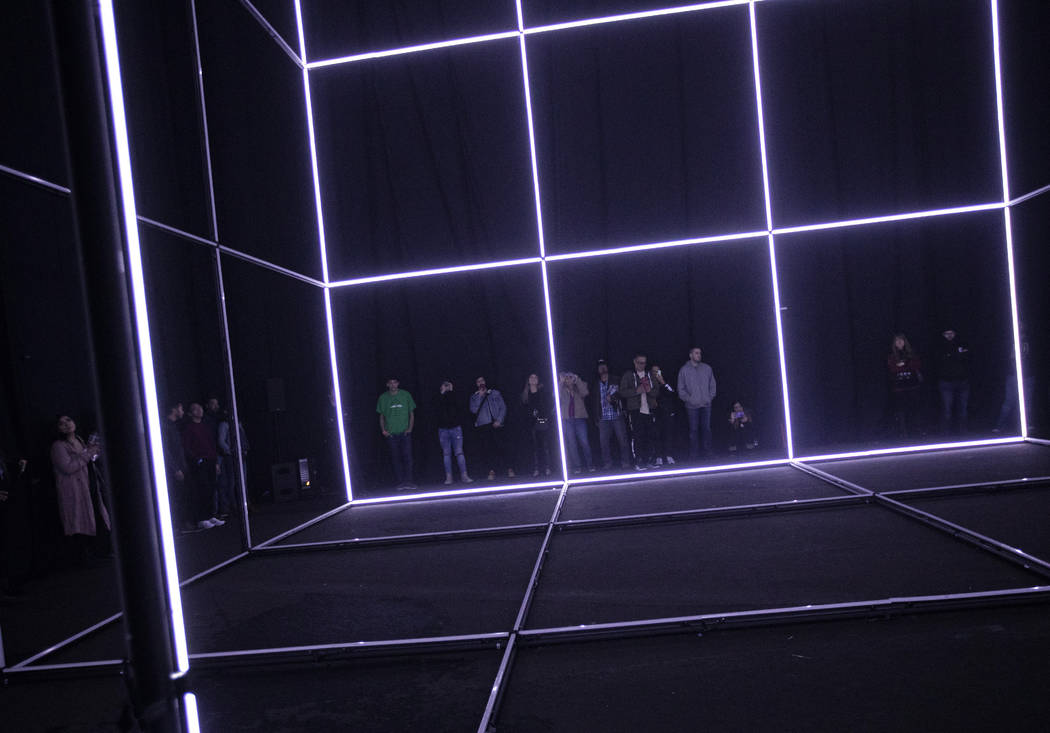 A cube made of lights was one of the art installations at Intersect Festival on Friday, Dec. 6, 2019, in Las Vegas. French due visual artist Noemi Schipfer and architect-musician Takami Nakamoto created the interactive piece. (Ellen Schmidt/Las Vegas Review-Journal) @ellenkschmidt_ 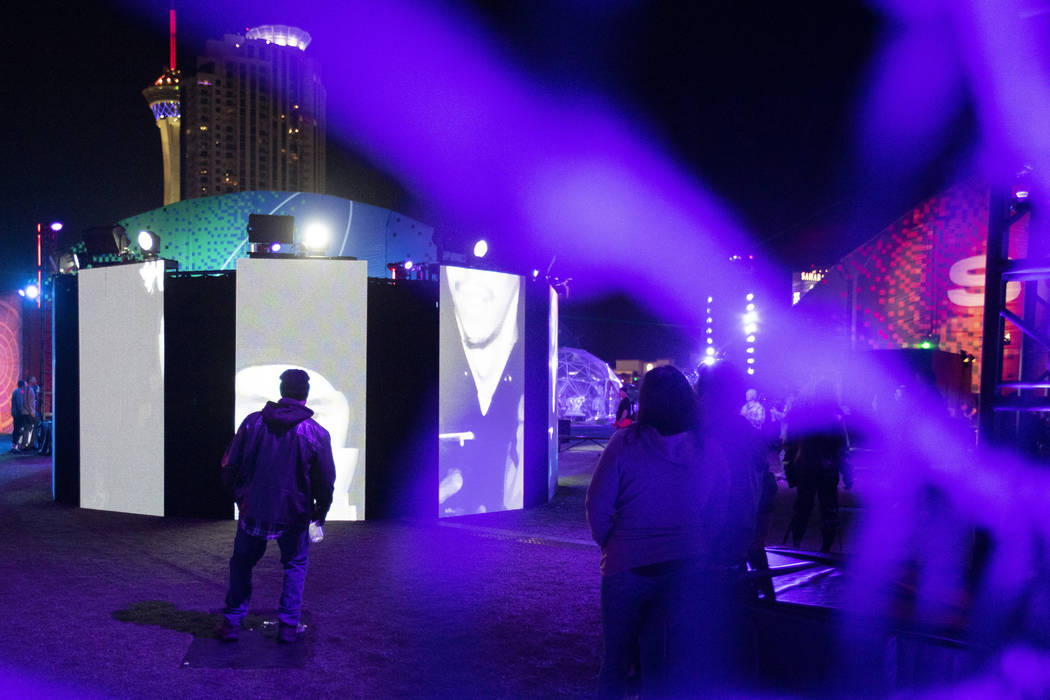 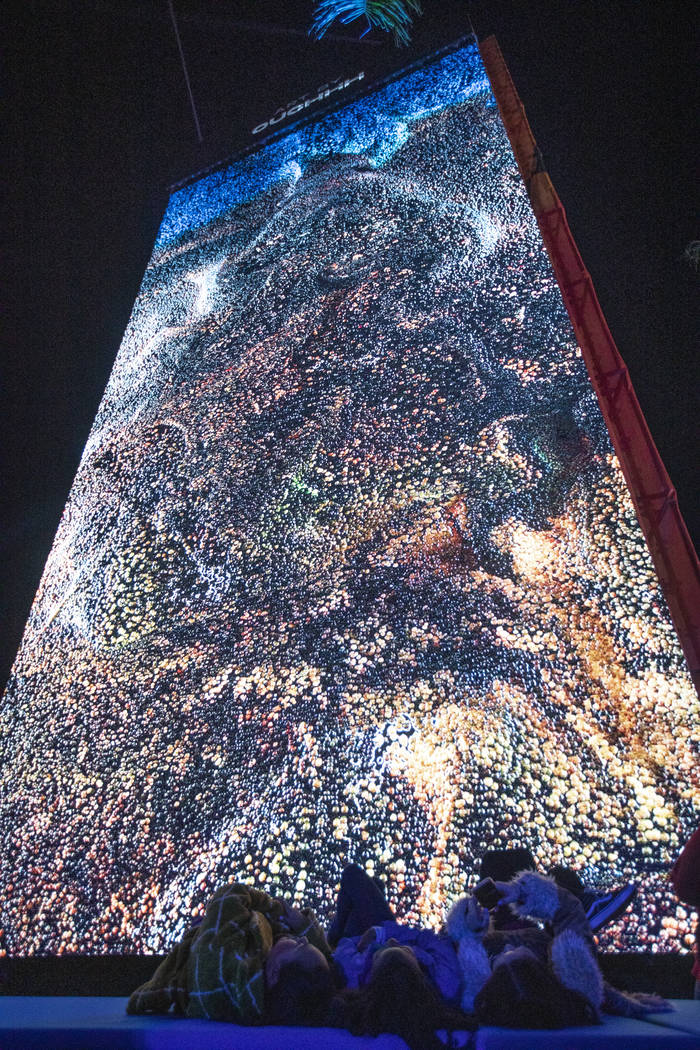 Whether one looked straight ahead, up at the sky or down at their feet, dancing lights, dazzling LEDs and phantasmagoric video were on view in massive scale at the inaugural Intersect Festival last weekend.

The festival that sprang from Amazon Web Services’ re:Invent Conference opened the once-private party for its 35,000 attendees to the public for the first time.

In addition to headliners such as Foo Fighters, Beck and Kacey Musgraves, Intersect touted itself as a festival for art and tech.

To that end, the art offerings leaned heavily on technological advances.

An untitled immersive activation by Nanotak invited festivalgoers into the perimeter of a pitch black room.

There, they were dwarfed by a behemoth of a cube, built on a grid.

The cube synced with driving electronic music and glowed with LEDs that twinkled with bright white light along the cube’s lines.

In Lost and Photon, by artist Mike808, dozens of focused lights moved across the ground.

About two dozen visitors were allowed into the rectangular room at a time.

Lost and Photon started by activating glowing rings along the floor, many of which encircled those who took a break to sit or squat.

Slowly, the lights transformed from circles into waves, then straight lines, then dots. With music, the lights moved back-and-forth across the room, sporadically illuminating the awestruck faces within it.

An interactive installation by Tigrelab invited attendees to stand in front of an octagonal video wall and have their picture taken. Images were then incorporated in a monochromatic video wall of body parts.

While not an art attraction, the 200,000 balls that made up the ball pit maintained a one-hour line of adults eager to relive their days of childhood.

Visitors climbed up the walls to a bouncy castle and then dove into a sea of white lightweight balls like the ones that used to be found in McDonald’s Playplaces.

After pushing through the 5-foot-deep pool, the only way out was to scale an inflatable staircase and bounce down a slide to the exit.

On both Friday and Saturday nights, a fleet of drones from Intel blasted off into the night sky above the Las Vegas Festival Grounds and assembled themselves into a medley of shapes and colors.

During Kacey Musgrave’s performance, the drones danced along, arranging themselves into a rainbow smiley face.

On Saturday night, the drones moved in conjunction with a video trailer for season four of the Amazon Original “The Expanse.”

The drones coordinated into symbols from the show, ending in the shape of a rocket ship that then spelled out “Prime Video.”