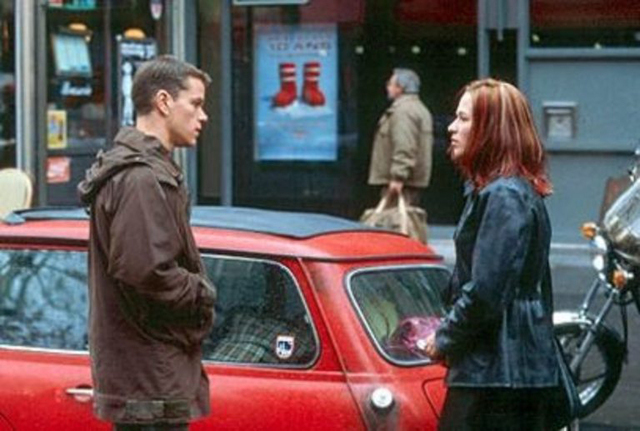 Matt Damon and Franka Potente star in "The Bourne Identity," which was partly filmed in Las Vegas. (Courtesy)

All that fuss about the new “Bourne” movie being filmed in Vegas comes down to this so far — it’s getting middling reviews.

In today’s world of gushing freelance movie critics who rave about the worst movies in order to lure writing gigs and online clicks, 57 percent is weak.

Even the audience score at Rotten Tomatoes is 73 percent, pretty meh for voters who might be fanatics who saw it opening night/day.

But the Las Vegas Strip chase finale is getting nice notes such as “breathless.”

R-J staff critic Chris Lawrence (not a click-baiter) said the movie doesn’t have depth but the Vegas portions make for “the wildest chase the Strip has ever seen.”

The fun Vegas Valley question is: Where will locals rank this film on the long list of Vegas-set movies?

UFC boss Dana White has a $360 million check coming to him — plus a new five-year contract — after the UFC sold for $4 billion.

And it’s somewhat freaking him out.

“When this deal closed, it bugged me out a little bit,” White said. “I have new partners now. I kind of Howard Hughes’d myself up into a hotel room for a couple of days. I didn’t sleep or eat.”

People are asking him for some of that money he earned.

“I don’t answer any family phone calls at all,” he joked.

Kimmel asked White if he’s a boss fighters like working for.

“Who likes their boss?” the sports tycoon said, laughing. “I have good relationships with most of the guys. There’s some guys I can’t stand. We don’t have to love each other to do business.”

And how did White end up endorsing Donald Trump onstage at the Republican National Convention?

Trump helped promote the UFC early in its history when few others did, he said, echoing what he said at the RNC.

Yet another hockey-name poll attracted 3,300 votes and the winning names are the usual ones Las Vegans say they prefer, via respected LasVegasAdvisor.com.

Conventional wisdom is the NHL doesn’t want gambling names such as Aces, even though that’s what we all are around here.

The name Outlaws came in ninth place, even though Outlaws was the winner in a 64-name R-J reader tournament (in which Scorpions edged out Aces for second place.)

There’s no update on when owners will let us know what the Las Vegas NHL team will be called when it hits the ice at T-Mobile Arena in fall 2017.

You can see stars of “Sharknado 4: The 4th Awakens” after the film premieres live on TV Sunday at the Stratosphere hotel.

The 5 p.m. premiere is private.

But you can buy a $15 ticket there to attend the 8-11 p.m. “Cast Party with a Cause” along with cast members at a hotel pool that’s just been renovated.

All sales go to The Animal Foundation.

Kix Brooks hit balls with his son and friend at Topgolf on Thursday.