Entertainer Jerry Lewis, famous for his zany comedy and for raising millions to fight muscular dystrophy, died Sunday morning at his home in Las Vegas.

He was 91. His family confirmed his death: “Famed comedian, actor and legendary entertainer Jerry Lewis passed away peacefully today of natural causes at 91 at his home in Las Vegas with his family by his side.” According to the family, Lewis died at 9:15 a.m.

Lewis, who performed in Las Vegas with Rat Packers Frank Sinatra, Dean Martin and Sammy Davis Jr. and many others, also famously became national chairman for the Muscular Dystrophy Association. He hosted the association’s annual Labor Day telethons from 1966 to 2010; they raised some $2.6 billion, according to People magazine. The children suffering from the disease, whom Lewis aimed to help with the telethon, became known as “Jerry’s Kids.”

Lewis was born Joseph Levitch on March 16, 1926, in Newark, New Jersey. He was the son of entertainers — Danny Levitch, a song-and-dance man, and Rae Levitch, a pianist; they performed with the surname Lewis during vaudeville acts. Rae lived in Las Vegas for eight years and is buried in Palm Valley View Cemetery.

In 1946, Lewis co-starred in a nightclub act with Martin, rising to meteoric fame. In the act, Martin was calm, singing unflappably; Lewis was jittery, scampering manically. After frequent pratfalls, Lewis would utter his trademark line, “Hey, lay-dee!”

Lewis’ love for Martin, whom he called “my partner,” was undeniable. Lewis said he often dreamed of performing onstage with Martin, and named one of his dogs Paulie, after Martin, whose middle name was Paul.

“This is the end of an era for me personally, and for millions of people around the world,” said Deana Martin, Dean Martin’s daughter, who considered Lewis a family member, often calling him “Uncle Jerry.”

“The night I was born, he and my dad were performing at Slapsy Maxie’s in L.A., so I have known Jerry all my life,” she said. “He could be tough, but he was always so giving and sweet to me.”

He was featured in Martin Scorsese’s “King of Comedy” (1982) and starred as himself in Billy Crystal’s “Mr. Saturday Night” (1992). On Broadway, Lewis starred in the 1995 revival of “Damn Yankees,” as Mr. Applegate, the Devil; he joined the production on an international tour.

U.S. Rep. Les Aspin, D-Wis., nominated Lewis for the Nobel Peace Prize in 1977 for his work with the Muscular Dystrophy Association. In 2009, Lewis received the Jean Hersholt Humanitarian Award for his charitable work.

Lewis has two stars on the Hollywood Walk of Fame, one for movies, one for television. The Library of Congress acquired Lewis’ personal archives in 2015.

Lewis also became famous in Europe for his acting and philanthropy. The French government inducted Lewis into the French Legion of Honor (1984) and named him Commander of the Order of Arts and Letters (2006).

During the 1976 MDA telethon, Sinatra staged an on-air Lewis-Martin reunion. Lewis remembered the moment, which he watched film of dozens of times and used in his multimedia stage show last year.

“I couldn’t believe it. I was stunned,” Lewis said. “Frank had set it up, and everyone knew about it except me. When Dean finally got to me, onstage, I was able to say, ‘So, are you working?’ That broke him up, it broke the ice and got our friendship back on track.”

Martin and Lewis wouldn’t perform together again until June 1989, when Lewis surprised Martin by bringing a birthday cake onstage at Bally’s for the singer’s 72nd birthday.

“Here’s to 72 years of joy you’ve given the world, and why we broke up, I’ll never know,” Lewis told Martin then.

Magician Penn Jillette, who has succeeded with a seemingly odd-fitting co-star, Teller, as Martin and Lewis did, said Lewis demonstrated the power of the right pairing.

“On the surface, they were two people who did not belong together, a handsome guy teaming with a comic outcast, but they absolutely belonged together,” Jillette said Sunday. “They had a powerful, powerful bond, and showed that art could be demonstrated between two people. Studying Martin and Lewis certainly changed my life.”

“Jerry took photos of the show, from beginning to end,” said Holmes, as Lewis was an avid photographer. “Finally, Sammy brought him up onstage, where they had a very long hug, reunited, and sang ‘Rock-a-bye Your Baby with a Dixie Melody’ (a top 10 Billboard hit for Lewis in 1956). That great night ended with Sammy cooking us all breakfast in his hotel suite.”

In 1988, Lewis and Davis co-headlined at Bally’s Celebrity Room, a clip of which Lewis played in his stage show at South Point.

“I saw him with Sammy at Bally’s,” said Brad Garrett, who opened for Davis and who now operates and headlines his own comedy club at MGM Grand. “It was unforgettable.”

Muscular Dystrophy Association board Chairman R. Rodney Howell expressed deep gratitude to Lewis and said the organization wouldn’t be the same without him.

“Jerry’s love, passion and brilliance are woven throughout this organization, which he helped build from the ground up,” Howell said in a statement. “Though we will miss him beyond measure, we suspect that somewhere in heaven, he’s already urging the angels to give ‘just one dollar more for my kids.’ Thank you Jerry, you are our hero. God bless you.”

Beyond MDA, Lewis lent his name and star power to Criss Angel’s HELP charity event in September. Lewis was a fan of Angel’s show at the Luxor.

“Jerry Lewis was the true king of comedy, a creative genius and the champion of children’s causes, may he rest in peace,” Angel said. “He will forever be imitated, but never duplicated! I cherish the time we had together and he will forever be in my heart. The world will never forget him! My deepest condolences to his beautiful family.”

Despite his long success, Lewis sometimes faced controversy. Over the years, as several outlets reported, some former MDA poster children claimed Lewis portrayed them as objects of pity.

In 2000, he famously told a comedy festival audience he didn’t like any female comedians, not even Lucille Ball. And, in 2010, he told television’s “Inside Edition” what he thought of troubled young stars such as Lindsay Lohan, calling her “a fresh, dumb broad.”

“I would smack her in the mouth if I saw her,” he said. “And I would be arrested for abusing a woman.”

As Lewis shined onstage, he often struggled with health offstage. He suffered a spinal injury after a pratfall in 1965 and developed a dependency on painkillers as he coped with the resulting aches. He once smoked five packs of cigarettes a day and later had two heart attacks. He had double bypass surgery on Dec. 21, 1982, at Desert Springs Hospital. He also battled prostate cancer and pulmonary fibrosis.

More recently, he had been hospitalized from June 3 to Aug. 7, suffering from a urinary tract infection.

Lewis’ final stage performances were Sept. 30 and Oct. 1-2 at the South Point Showroom.

‘The world lost a great one’

In memoriam, celebrities spoke glowingly of Lewis in person and online.

“What a sad day. We lost one of the greats,” Carrot Top, whose real name is Scott Thompson, said Sunday. “Jerry Lewis was truly a legend, icon, genius and master of comedy. I was lucky to know and work with him through all the years on the telethon.”

Recording star Tony Orlando, who co-hosted the Lewis MDA Telethon for 33 years, said: “(Lewis) was my boyhood idol, and we ended up friends. He always reminded me he only had three people partner with him onstage for live performances: Dean, of course, and then Sammy Davis Jr., and myself.

“After Sam died, he asked me to finish the dates with him on the road, and then at the Riviera and the Las Vegas Hilton. Talk about one of my dreams come true, to partner with the great Jerry Lewis, my idol. The world lost a great one today, as did Jerry’s kids. May he rest in peace.”

“Jerry spent his entire life making us laugh and working tirelessly for Jerry’s Kids with muscular dystrophy, Newton said. “I shall miss his love and friendship, but I know he is joining true friends who have gone before him. As long is he is in our minds and hearts, he will be with us forever.”

“His film techniques and creations were very much what a magician would do, combining logic with technology and problem solving with art,” Copperfield said. “Spending time with him and his family was a blessing.”

Even the White House weighed in. In a statement, Press Secretary Sarah Huckabee Sanders said Lewis lived the American dream.

“Jerry Lewis kept us all laughing for over half a century, and his incredible charity work touched the lives of millions,” she wrote. “He truly loved his country, and his country loved him back.”

Comedian Jim Carrey tweeted, “That fool was no dummy. Jerry Lewis was an undeniable genius an unfathomable blessing, comedy’s absolute! I am because he was! ;^D”

Closer to home, Nevada Gov. Brian Sandoval tweeted, “Jerry Lewis was a giant of entertainment. He brought laughter & awareness worldwide. He’ll always have a place in the hearts of Nevadans.”

And Las Vegas Mayor Carolyn Goodman tweeted, “Jerry Lewis was a neighbor & friend. He was such a laugh but also very wise often sharing his insights for building a more meaningful life.”

Lewis is survived by his second wife, SanDee Pitnick, whom he married in 1983, his daughter, Danielle, his sons, Gary, Ron, Scott, Christopher and Anthony, and several grandchildren. Lewis’ first marriage, to Patti Palmer, lasted from 1945 to 1980 and ended in divorce. 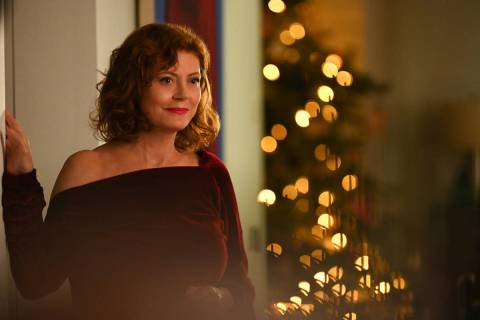