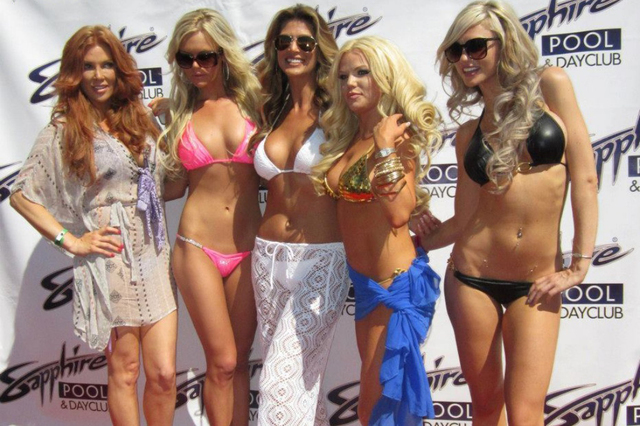 If the Oakland Raiders move to Las Vegas, the players will get free lap dances and limo rides at Sapphire strip club, free pancakes from Hash House A Go Go, and free DJing from “Pawn Stars’” Chumlee.

That’s just for starters, as freebies and junkets probably will pile sky-high for the city’s newest VIPs here in the comp capital of America.

“We want to make sure the Raiders receive a warm welcome to Las Vegas,” Sapphire general manager John Lee told me Monday.

NFL viewing is one of the biggest business boosts in the valley.

Lee said Sapphire also would offer Raiders paid hosting gigs on game days when the NFL team is off, including Monday nights and Super Bowl Sundays.

“We would like to extend a warm welcome to any of the sports leagues,” Lee said.

The all-nude Palomino Club’s owner Adam Gentile passed along a message that he’s so thrilled about the Raiders possibility, he has a “whatever it takes” attitude about supporting a team and its fans.

Just to begin with, the Palomino Club will buy a free drink for patrons whenever the Vegas-based Raiders win.

“We see a lot of NFL players at Crazy Horse III, and the players typically enjoy their privacy,” Ragano replied. “A pro team would be great for Vegas, and we would host viewing parties for every game.”

I reached out to other prominent entertainment businesses to ask if they have given thought to Raiders comps yet.

Players’ wives and girlfriends will not be left out, since Fawnia Mondey, owner of Pole Fitness Studio, will offer free one-year memberships to Raiders’ significant others.

And Hash House A Go Go will serve all-you-can-eat pancakes to players and coaches, with a caveat: only after hometown victories.

Other businesses didn’t respond before deadline or reported they haven’t thought about comps yet.

Cirque du Soleil’s “One Night for One Drop” fundraiser, which builds clean water wells in dirty water areas around the world, was filmed at The Smith Center in March. On Tuesday night, you can see the spectacle on the big screen around town. For theater screenings, see FathomEvents.com.

Sean Penn had dinner with friends at SW Steakhouse in the Wynn on Friday, before partying at Intrigue nightclub. Rob Lowe was eating there separately.

Miss Teen USA contestants drank something called “Little Miss Fruit Punch mocktails” Saturday night at Carmine’s, in the Forum Shops at Caesars, where they also dined. They rode the High Roller on Friday.

And classic rapper Too Short gave a surprise performance Sunday at Drai’s.