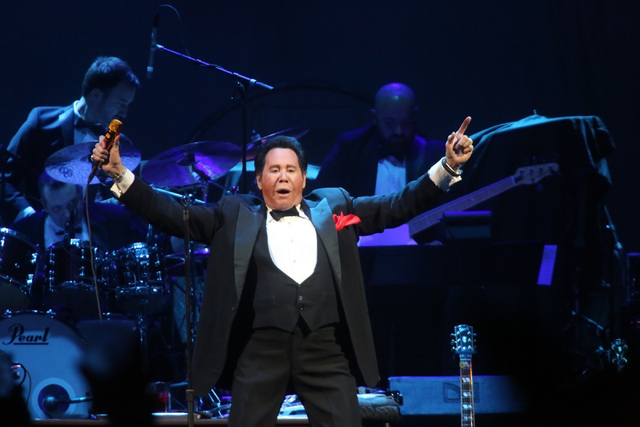 Wayne Newton came away from the opening night of the T-Mobile Arena with a killer souvenir.

Newton, one of the evening’s three main acts, said Flowers signed it: “Dear Wayne: You will never know what a thrill it was for me to be on the same stage as Mr. Las Vegas.”

Newton, who turned 74 last Sunday, said calls have been flooding in after all the media attention last week. He’s going to be on “The Tonight Show Starring Jimmy Fallon” on Tuesday, a daytime show in New York and then flies to Los Angeles for a show.

The most emotional moment, he said, came when he sang “My Way” and “everybody lit up their lights.” After dedicating the song to Frank Sinatra, “who helped start us all, I got tears in my eyes,” he said.

“It was a ball,” said Newton, who shared the stage with Shamir, comedian Jeff Civillico, Blue Man Group, Imagine Dragons frontman Dan Reynolds and The Killers.

The arena opening went down to the wire, with few hiccups.

“We didn’t get a chance to see the room until the day before it opened,” said Newton. “They were still setting up. One of the tractors that was setting up the band stands (for the performers) ran out of gas in the middle of our rehearsal.”

Furniture for the Hyde Lounge didn’t arrive in time for opening night.

“It was delivered not only on time but a month early,” said Arpin, referring to early plans to open it with a major fight on Cinco de Mayo weekend.

Neil, 55, allegedly pulled a woman’s hair when she approached his friend, actor Nicolas Cage for an autograph. The incident happened about 5 p.m.

TMZ.com video showed an irate Cage screaming epithets at Neil, reportedly after an altercation between them following the alleged incident.

Five years ago Neil made headlines for confronting former girlfriend and TV news reporter Alicia Jacobs during a comedy show at the then-Hilton Hotel.

Jacobs filed battery charges, claiming Neil got physical with her. The battery charge was dropped and Neil avoided jail after pleading guilty to disorderly conduct.

It read, “My angel @thevinceneil, love you with all my heart, thank you for always putting a smile on my face.”

April 10, 1959: Three robbers break into the house of Vera Kruppat her Spring Mountain Ranch outside Las Vegas and rip the 33.19-cart diamond ring off her finger. The FBI recovers it in New Jersey six weeks later and the thieves go to prison. After her death in 1967, Richard Burtonbuys the Krupp Diamond for Elizabeth Taylor. He paid $305,000, the highest price paid for a diamond at that time. It sold for $8.8 million in 2011.

“A California woman has turned her home into a sanctuary for 1,000 cats. She’s applied for both tax and man exempt status.” –Conan O’Brien