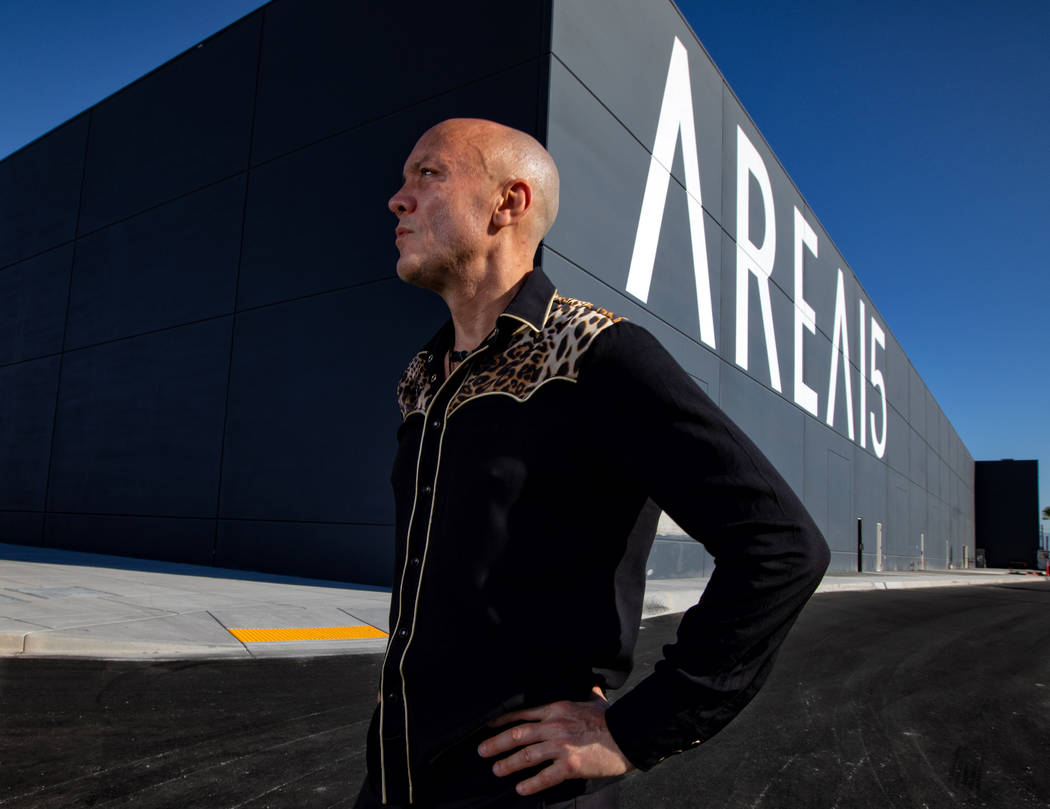 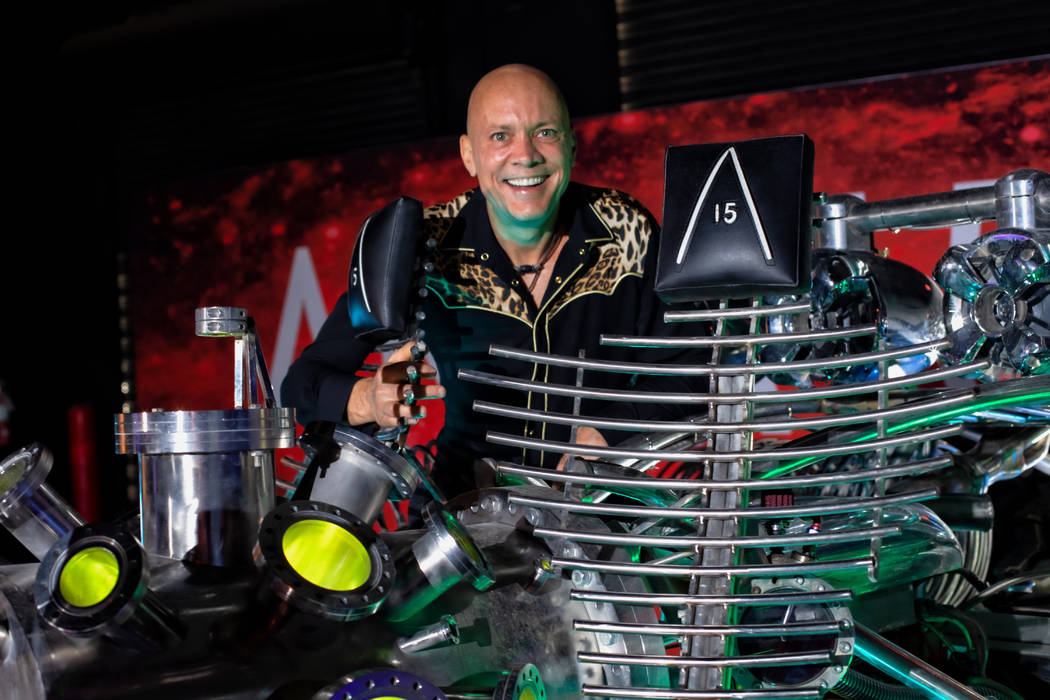 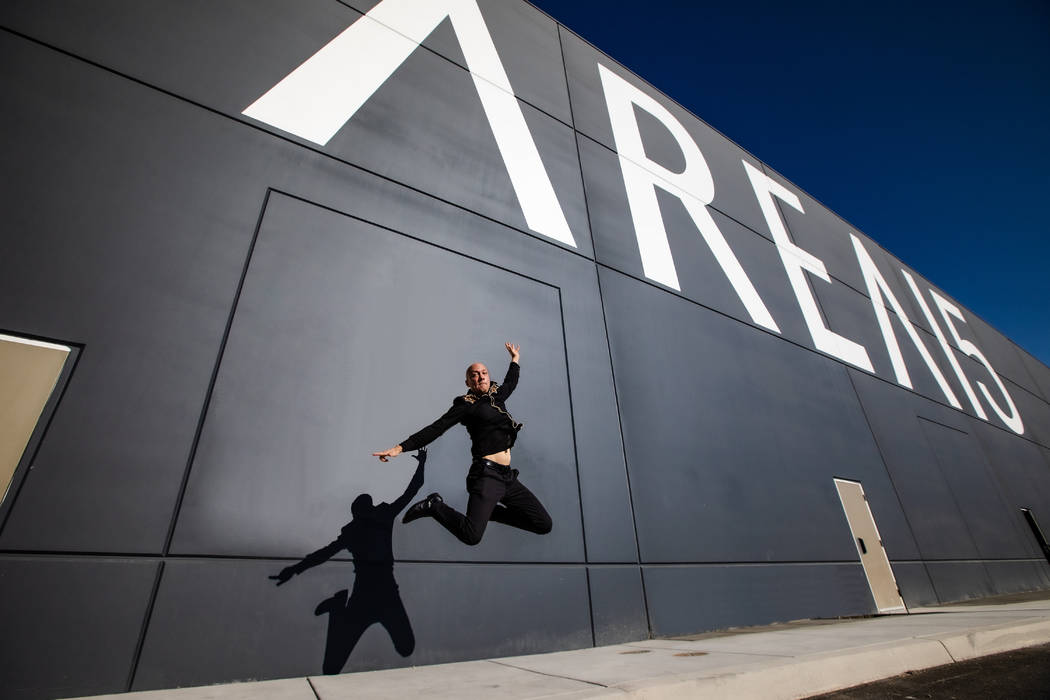 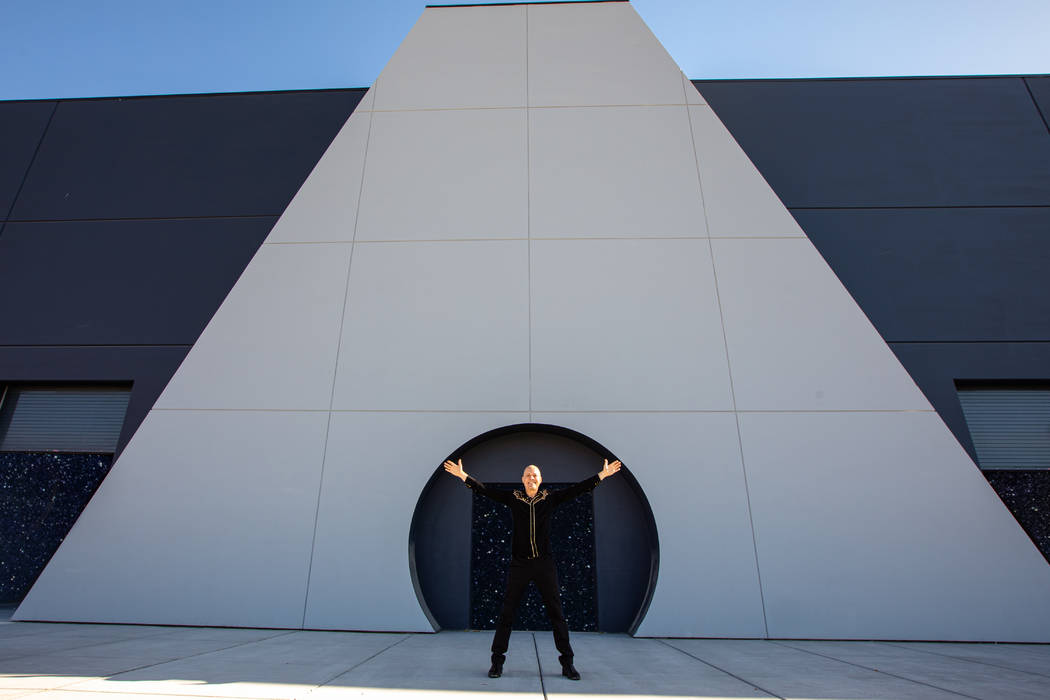 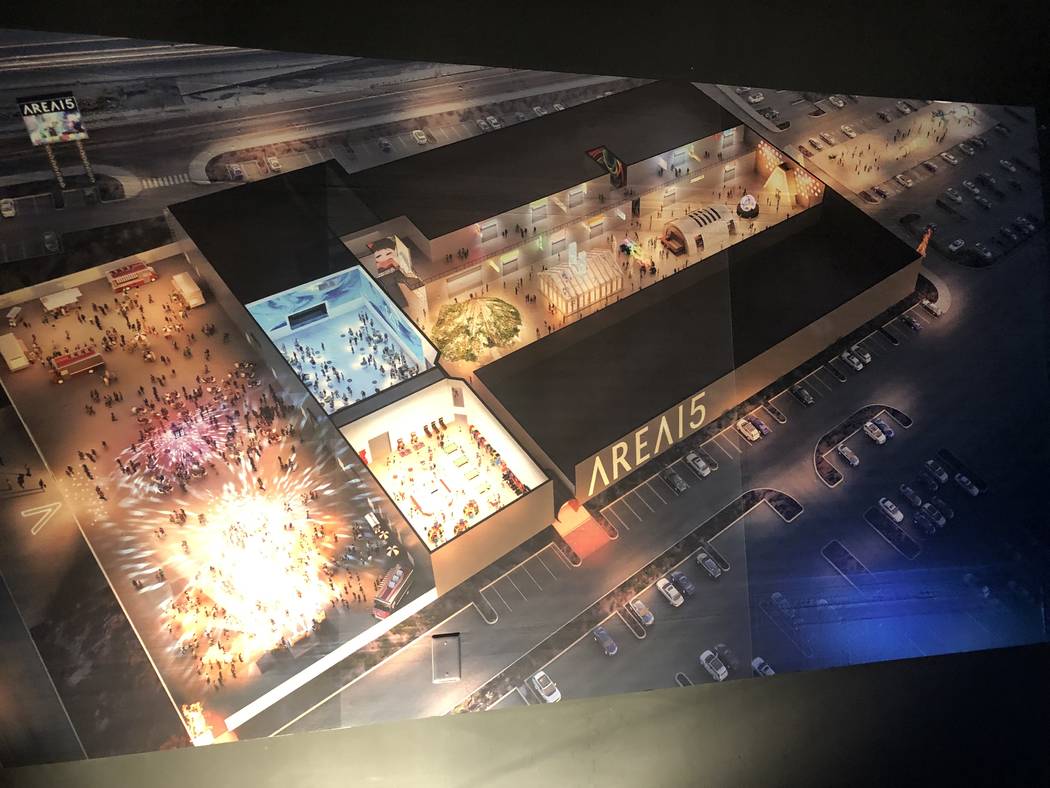 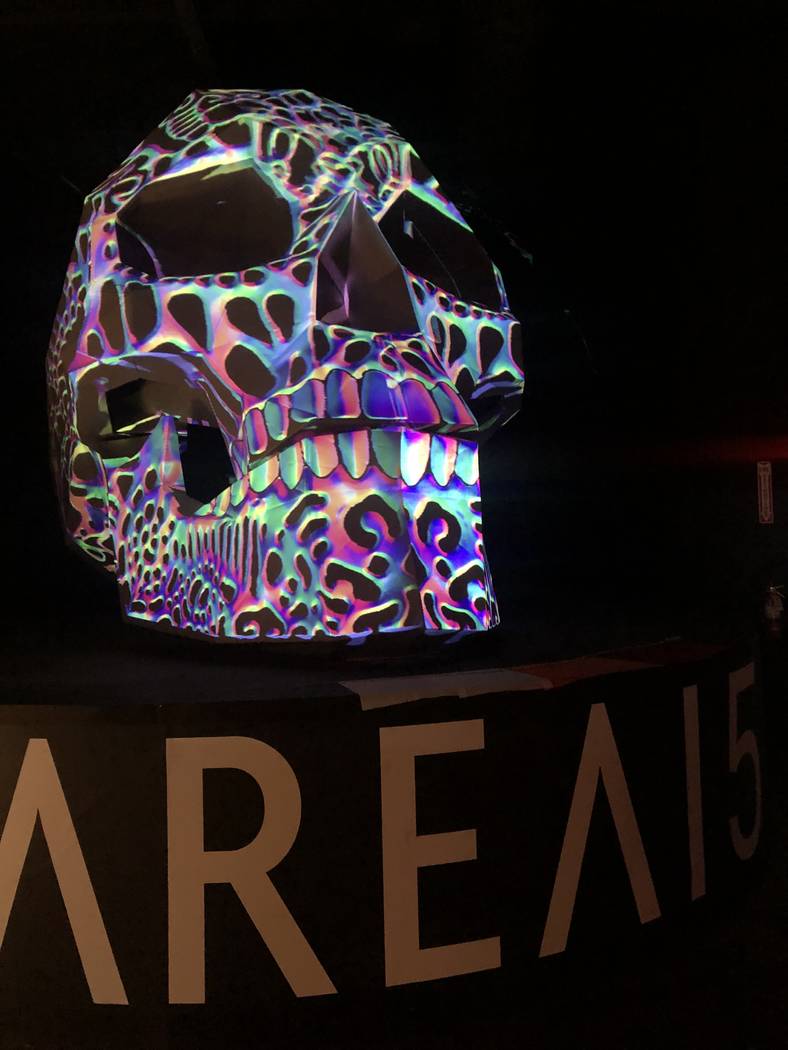 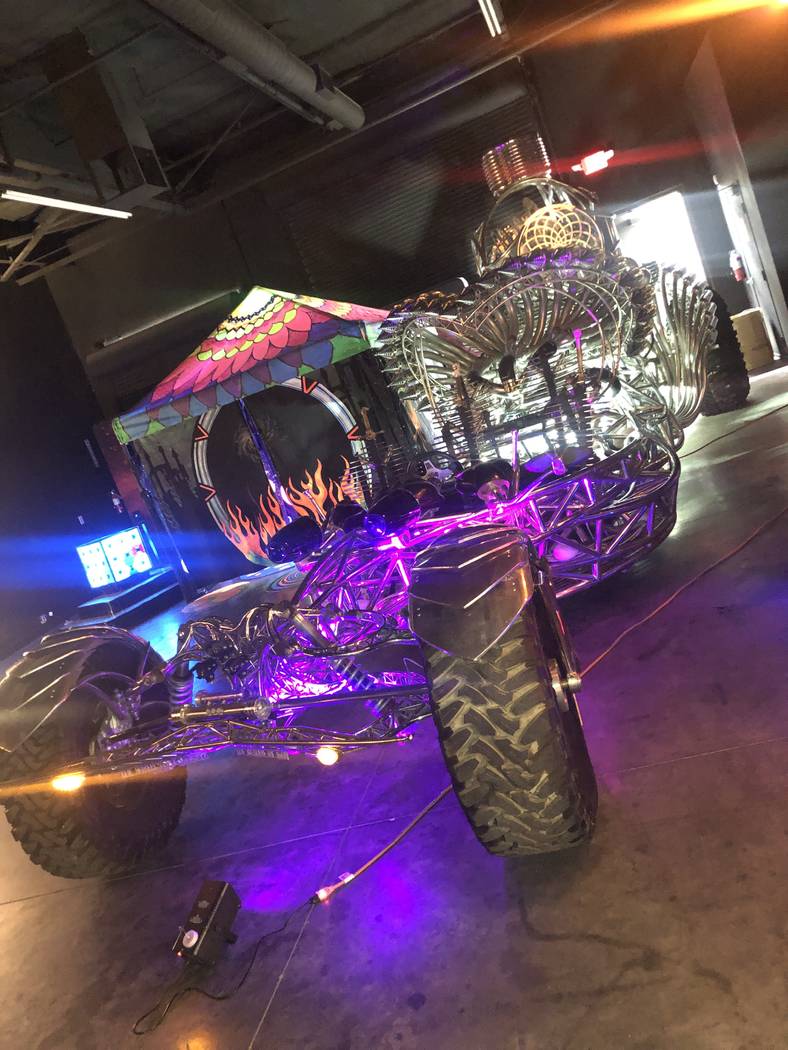 Chris Wink hears the word “larval” to describe the current condition of Area15, and and he seizes on that term.

“I’m using it,” he says, punching the word into his smart phone for future reference. “We are in the larval stages right now. We are going through metamorphosis.”

A pulsating, LED-trimmed larva effect would actually fit ideally with the sensibility of Area15, the massive entertainment/retail fortress under development at 3215 South Rancho Drive, just west of Interstate 15.

The interstate and a sense of Area 51 — a simple flip of the numbers — inspired the complex’s name. And, though it won’t be completely open until early 2020, Area15 is hosting a “Storm Area 51” live-stream party for that event (or, non-event) on Sept. 20. Check the Area15 website for more information.

Wink is Area15’s new “director of content and cool (stuff),” his official title actually carrying a profanity. Wink ascended to notoriety as a co-founder of Blue Man Group, along with fellow original Blue Men Phil Stanton and Matt Goldman. We met them all quite some time ago, in 2000, when BMG opened at Luxor and added a blue hue to the Strip that continues today.

But Wink split from the company a couple of years ago, as BMG was acquired by Cirque du Soleil and lead investor company TPG Capital. In that merger, the original BMG underwent its own metamorphosis with a more global and corporate emphasis.

Wink, always an artist first, wanted to move into something new and adventurous.

“I don’t want to sound negative,” he says, “but I should have done this years ago.”

He’s having a blast, darting around the 200,000-square-foot complex on a foot-powered scooter. The scale and innovation of Area15 reflects Wink’s ambition, and also that of partners Fisher Brothers and Beneville Studios, both headquartered in New York. Area15 CEO Winston Fisher and chief creative officer Michael Beneville share in Wink’s adventurism while striving to turn a commercial profit.

“We had a meeting the other day about live music, and someone said, ‘You don’t get a big return on live music,’ ” Wink says. “And Michael said, ‘OK, but we need live music here.’ That was it. We’re going to have live music.”

Elsewhere, Area15 is not so easy to define, especially as it takes form. It carries some of the more fanciful elements of Life is Beautiful and Burning Man. At the entrance, at least at the moment, is the pulsating 3D-LED Shogyo Mujo skull from Bart Kresa Studio, which stands 12 feet tall. Across the floor is Las Vegas artist Henry Chang’s Mister Fusion, one of Chang’s skeletal steel cars that have appeared at Burning Man. The SuperCube, also an LED effect resembling a Rubik’s Cube, was created by Geoff Banzhoff and commissioned by Meow Wolf.

Area15 already is showing it will be interactive, experiential, immersive (the oft-used terms for non-traditional entertainment attractions) and open to an array of tastes. The main promenade leading in, the Spine, is just off the main entrance. It is an open corridor that leads visitors to many appendages, including anchor tenant Meow Wolf of Santa Fe, N.M.

Founded in 2008, the company’s New Mexico fortress was profiled by Rolling Stone magazine in January: “Telaportative fridges, a Flintstones-style mastodon skeleton marimba, impromptu trapeze shows — it’s all commonplace in the House of Eternal Return, a 20,000-square-foot, wormhole-riddled art playhouse from Meow Wolf, the scrappy Santa Fe, New Mexico, art-collective-turned-conglomerate that’s poised to plunge the country into the multiverse, one WTF moment at a time.”

One at a time, yes. Keep in mind there is no admission charge to hang out at Area 15, but individual portals will charge a fee to be determined.

“We want to have a place that is fun with all kinds of cool, edgy stuff,” Wink says. “We want it to attract tourists, but also locals, who just want to go hang out somewhere without needing to have a plan.”

Emack & Bolios, famous in Boston as an early creator of “hippie ice cream,” opens its first West Coast outlet at Area15. Many well-known tenants and personalities also are moving in, to be announced as the metamorphosis continues.

And, in an unexpected turn of events, the man who created a trio of artists who never talk now is a company spokesman. It’s a role Chris Wink relishes.

“I was attracted to Area15 because its team comprises the right mix of not only creativity, but also business sense to ensure the complex achieves worldwide success,” the onetime Blue Man says. “When I met with Area15, I quickly knew it would be my next move. And … I also love my title!”