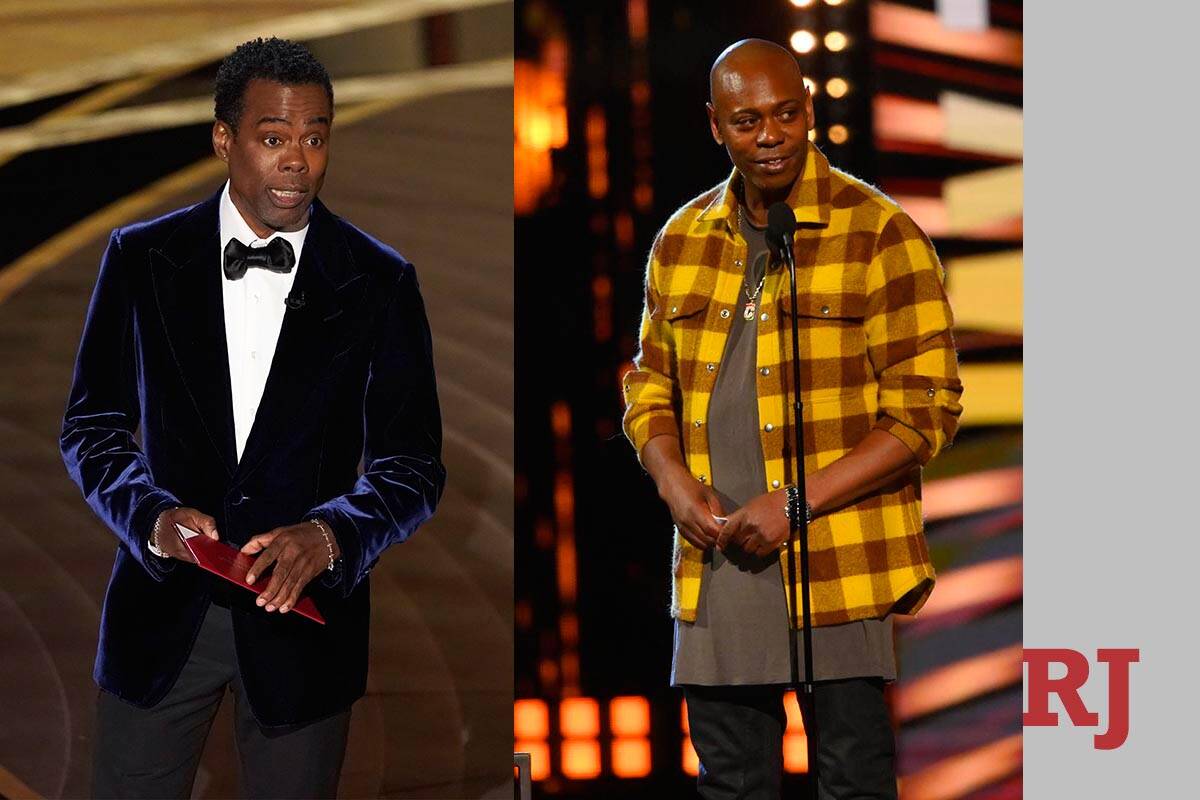 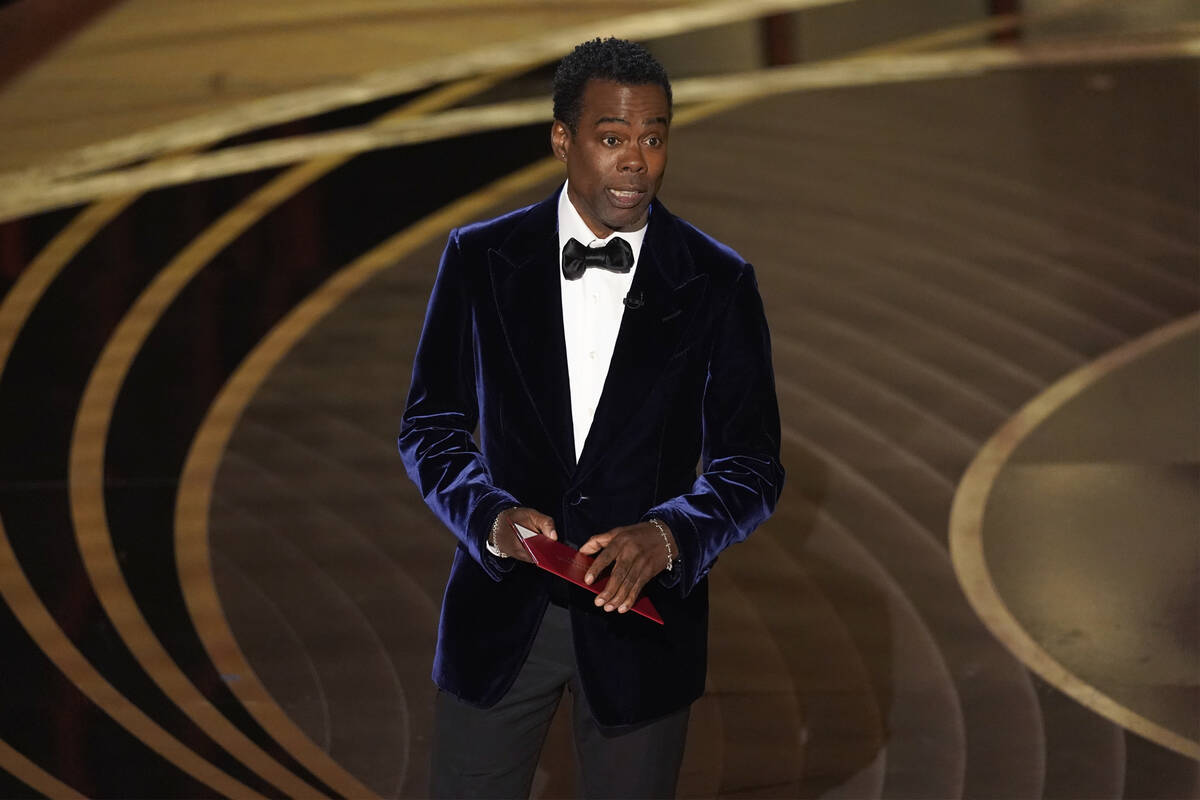 Chris Rock presents the award for best documentary feature at the Oscars on Sunday, March 27, 2022, at the Dolby Theatre in Los Angeles. (AP Photo/Chris Pizzello) 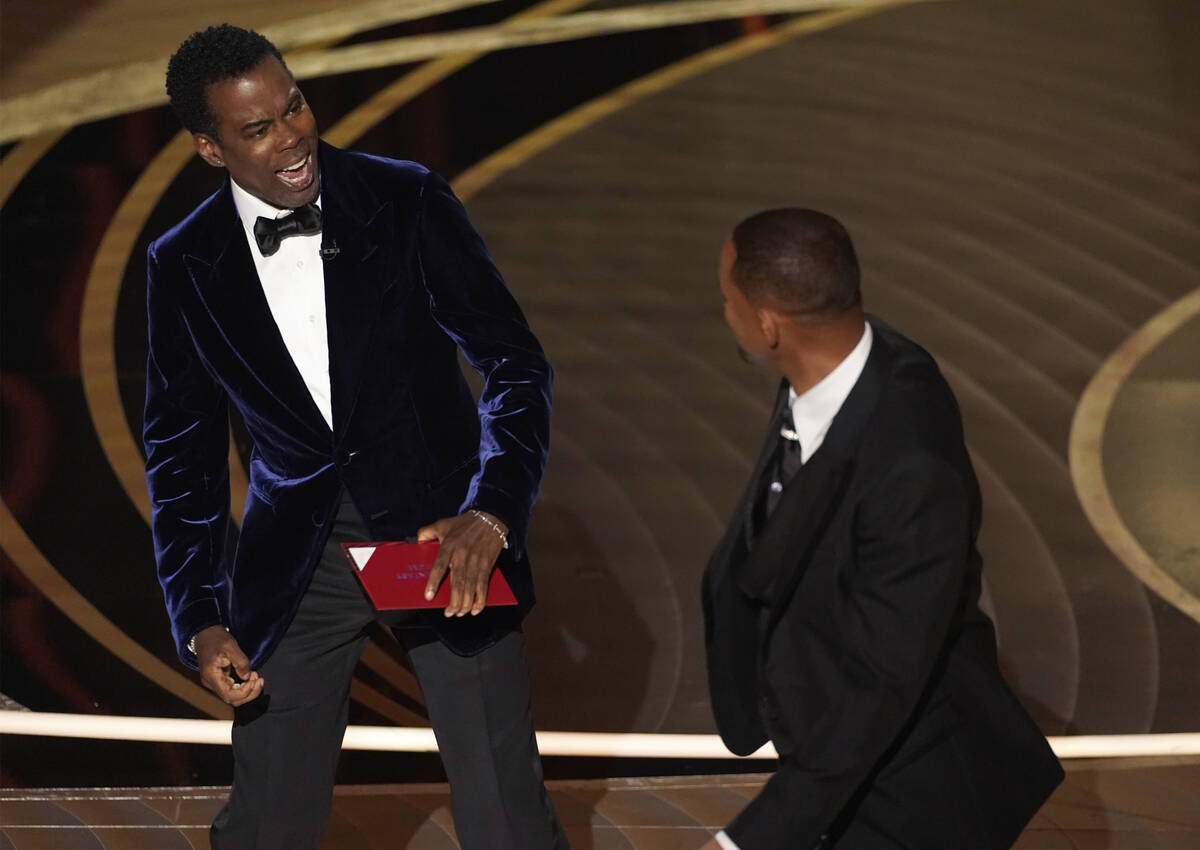 Presenter Chris Rock, left, reacts after being hit on stage by Will Smith while presenting the award for best documentary feature at the Oscars on Sunday, March 27, 2022, at the Dolby Theatre in Los Angeles. (AP Photo/Chris Pizzello) 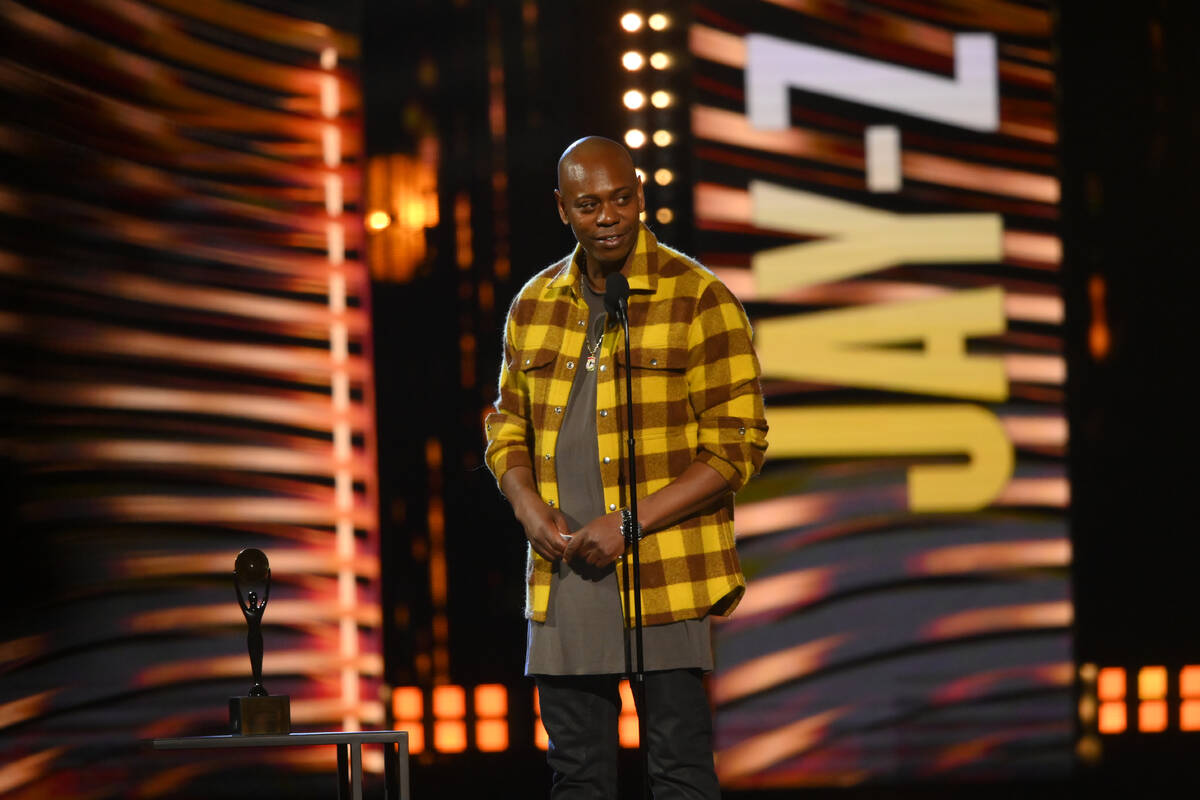 FILE - Dave Chappelle, presenter for JAY-Z, speaks during the Rock & Roll Hall of Fame induction ceremony, Saturday, Oct. 30, 2021, in Cleveland. Chappelle was tackled during a performance at the Hollywood Bowl Tuesday, May 3, 2022. Security guards chased and overpowered the attacker, and Chappelle was able to continue his performance while the man was taken away in an ambulance. (AP Photo/David Richard, File)

The attack on Dave Chappelle has been something a booster shot to the Will Smith-Chris Rock Oscars slapping incident.

Smith’s smack on Rock at the March 27 Academy Awards telecast had nearly expired from conversation when an audience member tackled Chappelle onstage at the Hollywood Bowl on Tuesday night.

On Thursday, Chappelle headlined a surprise performance at the legendary Belly Room at The Comedy Store in L.A. Rock was among the comedy royalty at that show, and actually joined Chappelle onstage 10 minutes into his set.

Rock and Chappelle reportedly bonded over their respected onstage episodes. According to The Hollywood Reporter, Chappelle joked to Rock, “At least you got smacked by someone of repute! I got smacked by a homeless guy with leaves in his hair.”

Rock laughed, responding, “I got smacked by the softest (person) that ever rapped.”

It’s all unfolding as Rock makes his first Strip appearance since the Oscars telecast on Friday and Saturday night at the Colosseum at Caesars Palace. At this writing, a few single seats for both shows are available on Ticketmaster’s resale platform, ranging from $189-$655.

Rock hasn’t elaborated publicly on the happenings of Oscar night, only saying nights later he is “kind of processing” what happened.

We likely won’t see or hear much, or any, of this weekend’s performance. Rock doesn’t permit phones to be used in his shows at the Colosseum (or anywhere), as they are “pouched” for the show. Same for Chappelle. But at least one audience member was able to sneak a phone into the Hollywood Bowl show. That video has gone viral.

To tie it together, Pauly Shore, whose mother, Mitzi, ran The Comedy Store from 1972 until her death in 2018, is not going to attend either of Rock’s shows. A Las Vegas resident, Shore is booked at The Comedy Store in La Jolla, Calif.

A reference to the body fond in the barrel at Lake Mead last week. Somehow, folks think Goodman knows the details of this incident. Now he doesn’t want to leave the house. Even Mayor Carolyn Goodman, also Oscar’s wife, can’t spring him.

“Particle Ink: Speed of Dark,” or what I call, “A warehouse meander artfully interrupted,” has opened on Main Street in the Arts District. The new, whimsical trek to the Metaverse is just across from The English Hotel, and about a Goodyear tire throw from Howie’s Automotive.

The immersive experience (for lack of a better term) takes guests through a portal into the 2.5th dimension. Dazzling light projection mixes with physical performances. Performers seemingly “paint” with this emitted light. It’s really a breathtaking combination of mixed-reality installation and live performances. You need to be directed through the connected rooms, as you actually feel lost in the experience. That’s a good thing, unless you trip over a bathtub (which is part of the show).

Performances happen all around you, and several interactive experiences. The concept is to enter the 2.5th dimension, “The liminal space between waking and sleeping,” as organizers describe, and explore what moves you. The project is four years in the making, envisioned by The LightPoets, who have worked with Cirque and Disney Imagineering artists. Particle Ink Executive Producer Cesar Hawas is also producer of the acclaimed New York City cabaret show and experience Sleep No More.

Our take: It’s great to experience inspired art in the Arts District. that is the point of the 18b neighborhood, with “Arts” in the very title. The region is bubbling over with all sorts of distinctive restaurants, bars, coffee shops, and late-night hangs (and even Wiseguys Comedy Club). A statement that caught my attention was from Majestic Repertory Theatre founder Troy Heard: “It’s the best thing in Las Vegas right now.” We aren’t that strident. Too much cool stuff in play these days. But it is worth a look-see, and a walk-through.

On May 1, Live Nation executive Billy Conn was honored by Mayor Goodman with his own day. Conn was recognized on the 30th anniversary of his move to Las Vegas. He has since booked such artists as Chicago, Earth Wind and Fire, Styx, ZZ Top, Foreigner, Steely Dan, Lady A (then known as Lady Antebellum) and Billy Idol.

Conn worked in entertainment, special events and nightlife at Hard Rock Hotel and Palms before joining Live Nation. He’s “impactful,” as we say, filling theaters while making deals behind the scenes.

I thought of Conn during recent visits to the Palms, where we met several years ago at the since-closed Lounge at the Palms. Live Nation is all but announced as the booking partner at Pearl Concert Theater. We expect the expertly conceived music hall to return as a significant player in the live-enterainment scene, beginning in June.

Reckless is bringing a full production in its first residency since landing in Vegas in 2014. Roni Meron and Paige Strafella are the band’s backing singers, JoLae Brandt-Shapiro and Brittney Sourlis the backing dancers and Sarah LeClear-Domingo is dance captain/choreographer.

Shapiro plans rotating guest singers, too, with Kelly Clinton-Holmes set for July, Anne Martinez in August, Niki Scalera in Septemer and Kelly Vohnn in October. It’s a whole thing with this bunch. Ah, and also horns, too, once a month, arranged by trumpet great Isaac Tubb.

Long-term plans for the room are to return it to a proper 1,500-seat theater in the next two years. The venue was reopened as Life Nightclub in the SLS Las Vegas days, then The Foundry, which hosted concerts by such headliners as Adam Lambert and Hellyeah and also the Jon Lovitz-Dana Carvey residency. The adult variety show “Blanc de Blanc” ran briefly in the space, too, pre-COVID.