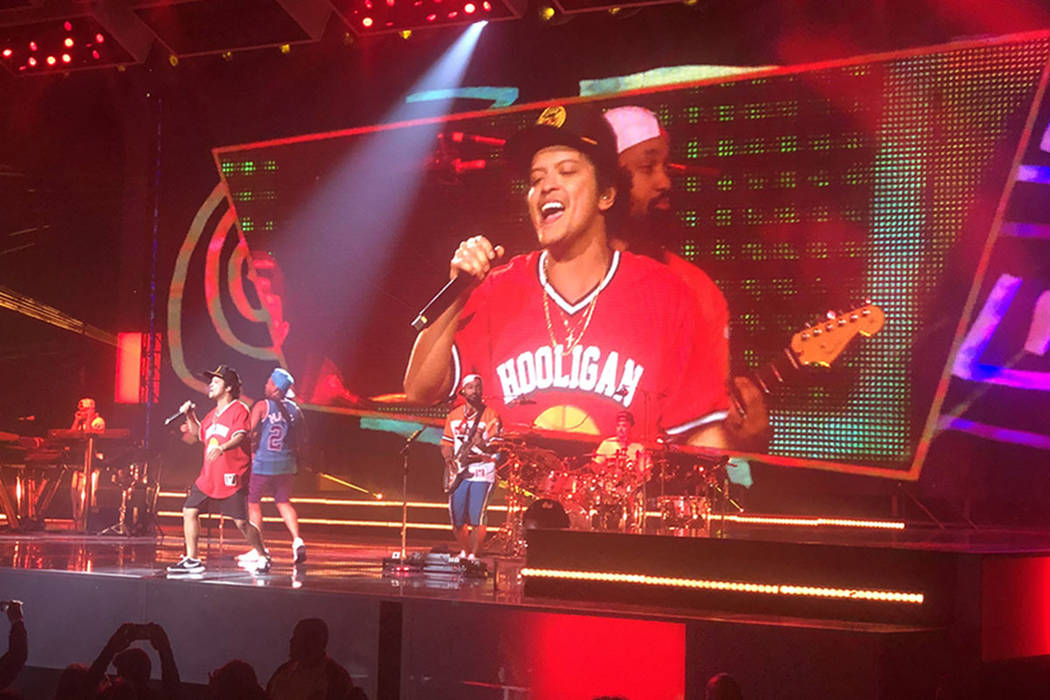 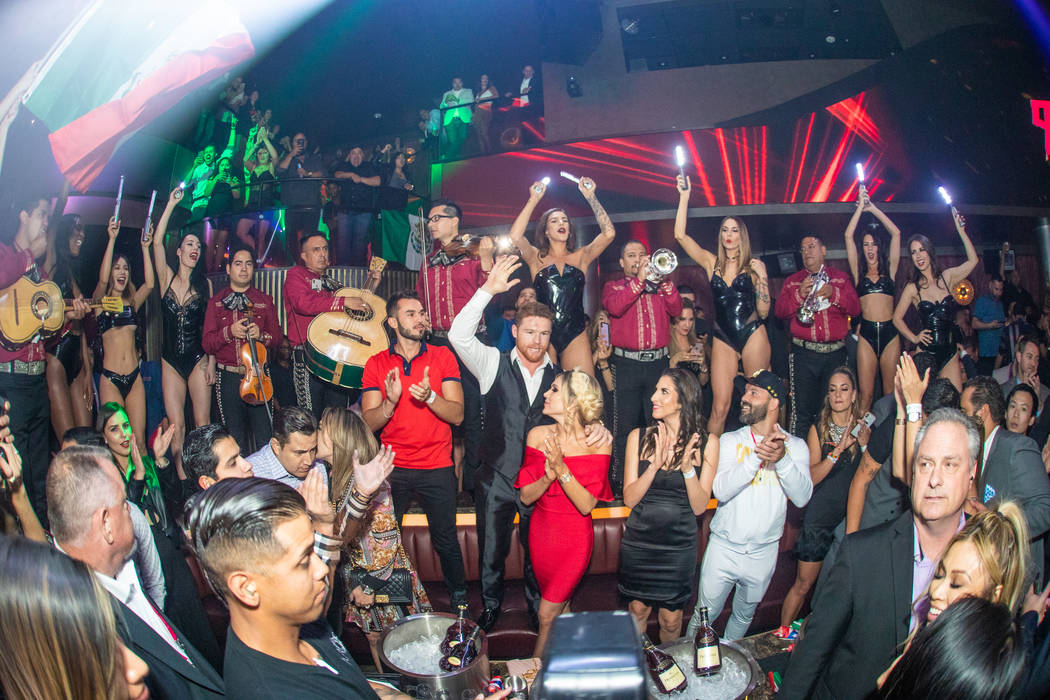 Canelo lvarez and Fernanda Gomez arrive at Canelo lvarez's after-party at KAOS Nightclub at the Palms on May 4, 2019 (Tony Tran) 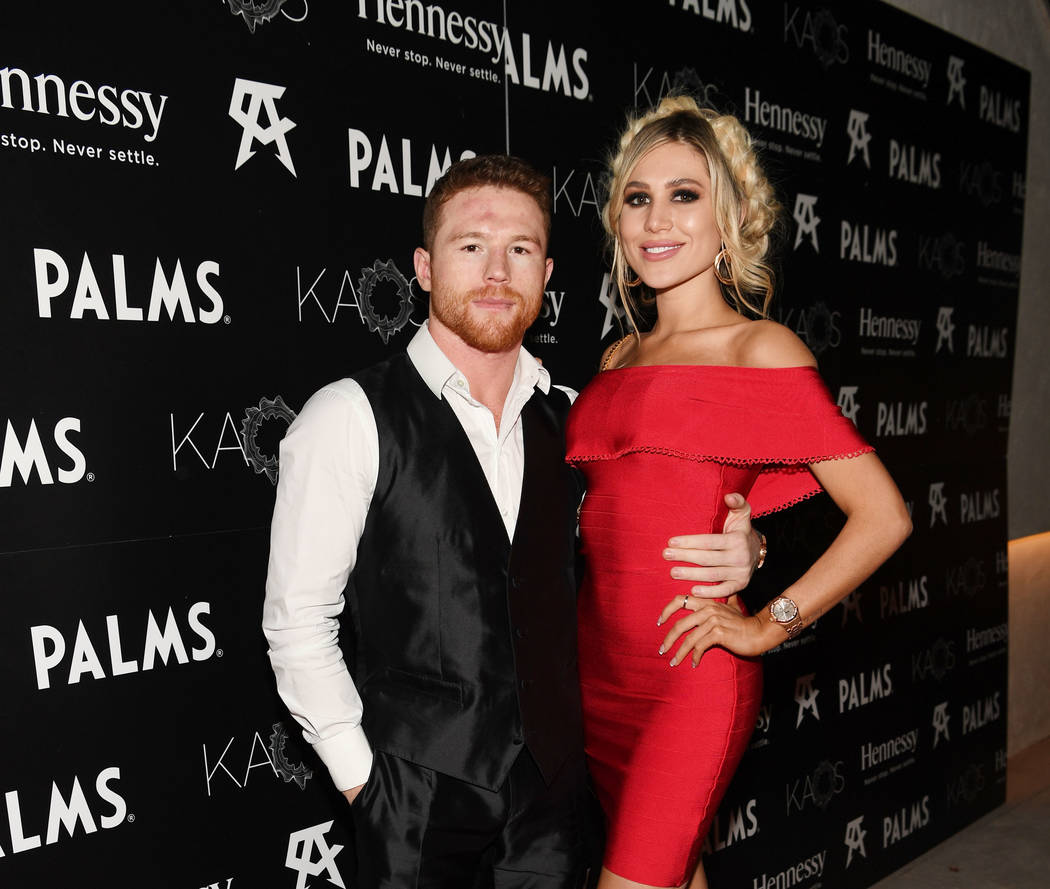 Canelo lvarez and Fernanda Gomez arrive at Canelo lvarez's after-party at KAOS Nightclub at the Palms on May 4, 2019 (Denise Truscello/Wire Image) 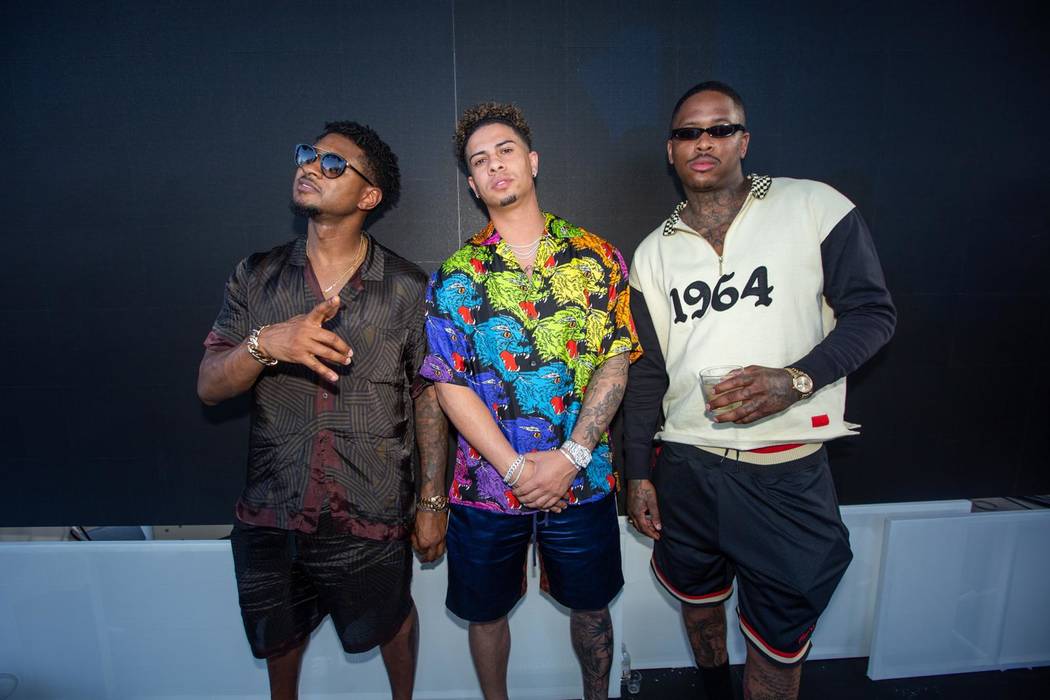 Usher, Austin McBroom, and YG are shown at Kaos Nightclub at the Palms on May 4, 2019 (Megan Blair) 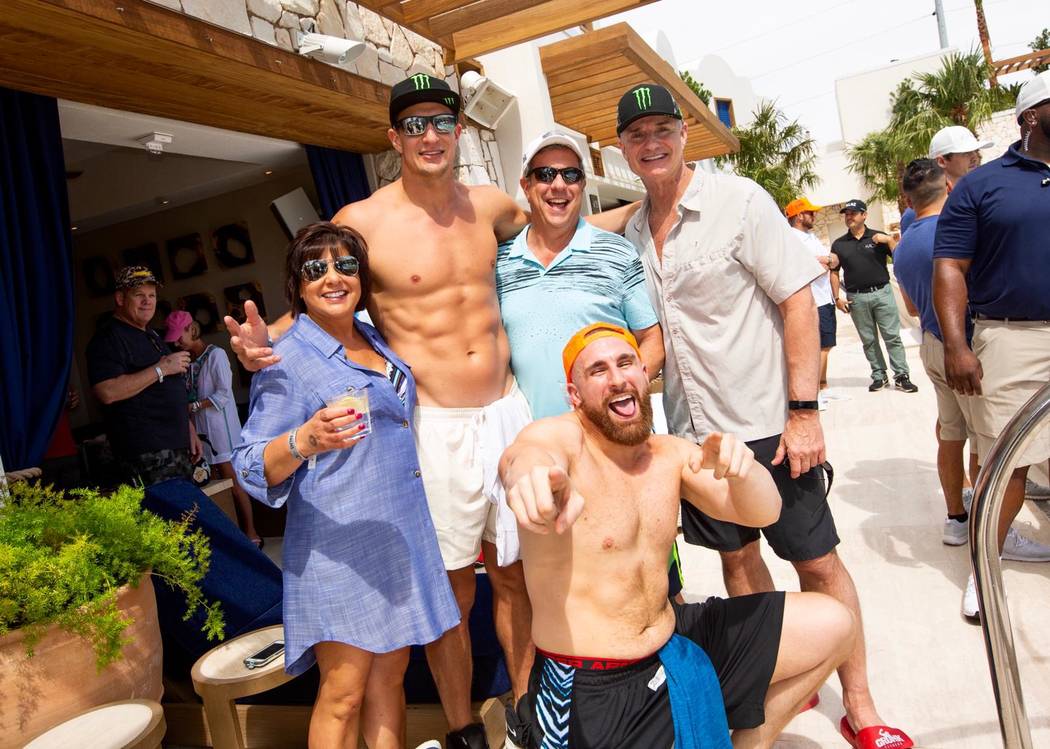 Rob Gronkowski and Dean “Mojo Rawley” Muhtad are shown with Gronk's friends and family memvers at Kaos Dayclub at the Palms on May 4, 2019 (Megan Blair) 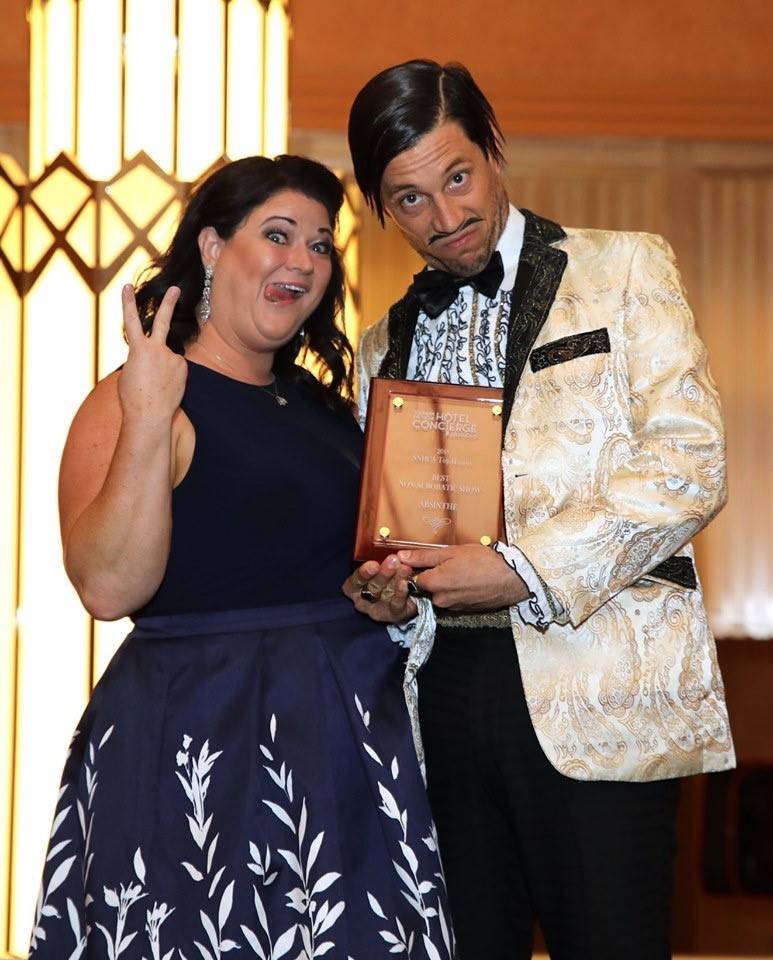 The Gazillionaire of "Absinthe" picks up the hardware as "Absinthe" is awarded Best Non Acrobatic Show by the Southern Nevada Concierge Association. (Spiegelworld) 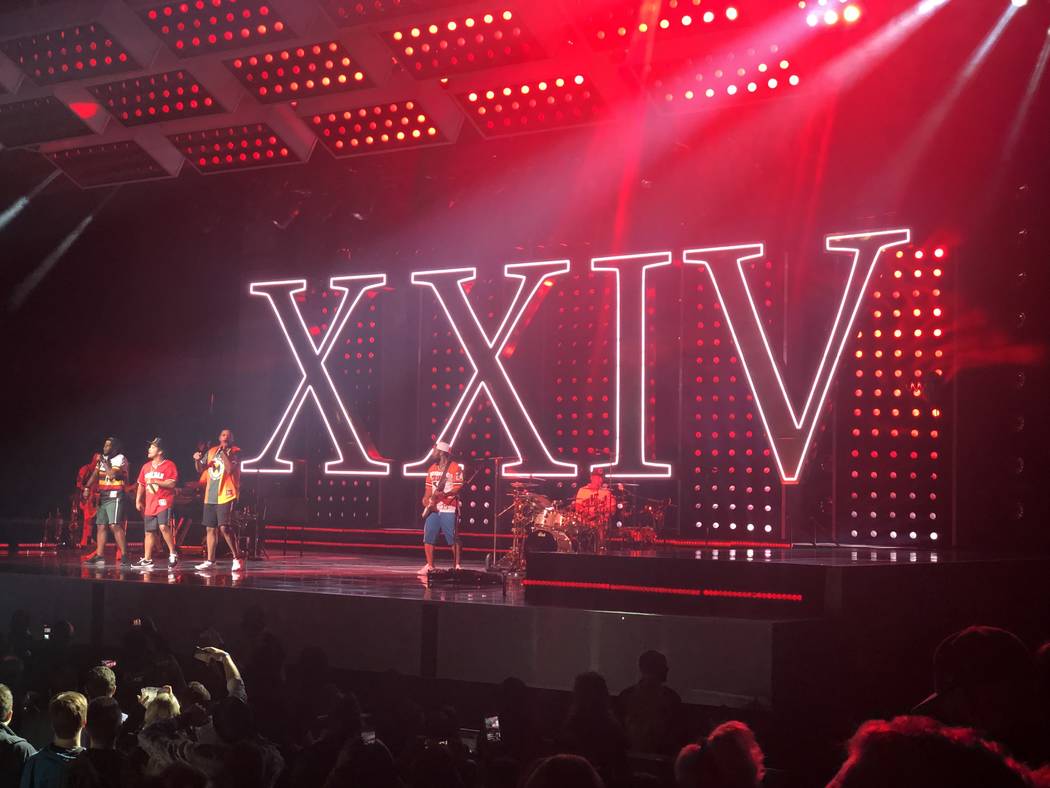 Outside of a live performance, you’ll likely never hear or see some of Bruno Mars’ most inventive work. This includes his cover of Celine Dion’s “My Heart Will Go On,” which he performed after fans shouted Celine’s name during the request segment of his show at the Park MGM on Saturday night.

“Y’all wanna hear Celine? Let’s go!” Mars shouted as the band played through about half of the Oscar-winning theme to “Titanic.” “I’m not the original, but I’m close!”

Going off memory on those exact words, because Mars famously “pouches” the phone in his show, which leads to an original you will probably never hear, either: “I Took Your Phones,” with the refrain, “I’m gonna take off my shirt! And nobody is gonna see it on Instagram or Twitter! ‘Cuz I took (expletive) phones!”

Mars closed the most recent run of shows in his ongoing residency at Park Theater at Park MGM over the weekend. We don’t need visual evidence to report that he crushed it. Other than the Celine stretch and the subversive “I Took Your Phones,” I learned you are not allowed to bring binoculars into Park Theater.

A fan next to me had hers confiscated early in the show after she had them trained on the stage — which seems pointless anyway, when you have two giant LED screens beaming down at you from both sides of the theater. “I Took Your Binoculars” might be the next original for Mars’ show. Probably a deep cut.

Leave it to “Absinthe” to win an award for which it should never have been nominated.

The tented comedy/acrobatic show at Caesars Place has been named Best Non Acrobatic Show by the Southern Nevada Hotel Concierge Association. The show was presented the honor on April 28 at The Smith Center. A release was sent out last week, celebrating the impressive, if ill-placed, award.

“Best non-acrobatic show? Really?” The Gazillionaire, the production’s fictional overlord, said in a news release. “Ninety percent of the show is acrobatic. But the other 10 percent is me, so what you’re saying is I’m the best part of the show!”

Also, from Spiegelworld’s official Gazillionaire Twitter account, “It was worth firing every acrobat in the show to win this prestigious award.”

The Gaz character is unreal, but his 90 percent stats are about right. The human balancing act Duo Vector, the balancing team of Atlantis, and Frat Pack low-wire act date to the show’s very opening. Alexa & Ming are among the production’s dozen or so aerial acts over the years. David O’Mer, the popular “Bathtub Boy” dates to even before the show arrived in Las Vegas, to its infancy in a tent under the Brooklyn Bridge.

This is actually the second straight year “Absinthe” has won the Best Non Acrobatic Show award from the SNCA. The organization has final call on which divisions shows are categorized. Established in 1990, SNCA is set up to provide the “highest level of service to visitors in Las Vegas.”

What the group got right is “Absinthe” is a must see — just expect a bevy of acrobats in the show.

“As Spiegelworld founder Ross Mollison says, “It’s an award! Any category is ace! We just won’t mention it to the acrobats.” Yep. I wouldn’t want to be the one to break it to Duo Vector strongman Lucasz Skerba (who has the strength of 10 men) he is not an acrobat.

“Canelo” Alvarez marked his unanimous decision over Daniel Jacobs by going toe-to-toe (heh) with the revelers at Kaos Nightclub and Dayclub after Saturday night’s fight. Latin superstar Ozuna performed for that fiesta. Canelo showed up at about 2 a.m., looking none the worse for wear.

The ex-Pat spent much of Thursday, Friday and Saturday at the Palms’ new mega-club. Kaos is imposing, unwieldy, hard to tackle, but a lot of fun. Kind of like Gronk himself.

Mr. Las Vegas Wayne Newton is giving it a go Monday night, returning from back surgery to resume his residency at Cleopatra’s Barge at Caesars Palace.

He is the world

Westgate hosted the Mrs. World pageant over the weekend. Friday was Westgate Resorts owner and pageant judge David Siegel’s 84th birthday. You know what’s coming: During Friday’s preliminary competition, all 37 contestants sang “Happy Birthday to You” to Siegel, in their native languages. That entire series of tributes took an hour, but Siegel smiled all the while and didn’t age a minute.

Elisa Fiorillo and Kelly Clinton-Holmes’ “First Ladies of Las Vegas Entertainment” is a slammin’ show for the cozy Pegasus Showroom at Alexis Park. Fiorillo’s run through Prince’s “Kiss” kills (she worked with him for more than six years, on tour with New Power Generation) and Clinton-Holmes’ “Kelvis” Elvis tribute is great fun.

The show continues at 7 p.m. Friday and is back June 8, performing Fridays and Saturdays through July. Vocalist Lisa Gay begins her series in the Pegasus room at 9 p.m. Saturday.

Word out of SLS Las Vegas is “Blanc de Blanc,” a sharp comedy and acrobatic show (maybe it’ll win a non-award someday) is headed for the Foundry, likely by the summer. The hotel is also building entertainment venues into two ballrooms, and also revamping Foxtail nightclub … Spiegelworld’s “Now We’re Here” disco production is targeted for a first-quarter (or, spring) 2020 opening in a new venue; I’d bet at Caesars Palace … “Opium” at the Cosmopolitan had its strongest sales week of the year in the week ending April 28. Mollison says the show is planning to expand its theater seating from the 300 now to about 340. That show is also acrobatic, and as such, up for the same SNCA award captured by “Absinthe.”