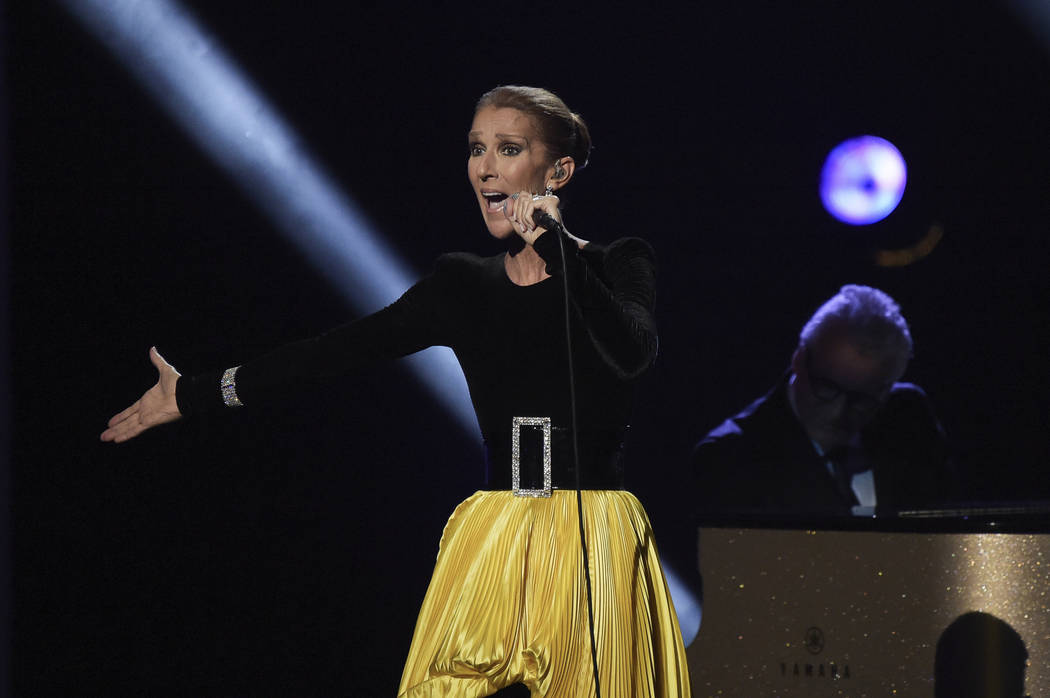 Celine Dion performs at the "Aretha! A Grammy Celebration For The Queen Of Soul" event at the Shrine Auditorium in Los Angeles in January 2019. (Photo by Richard Shotwell/Invision/AP) 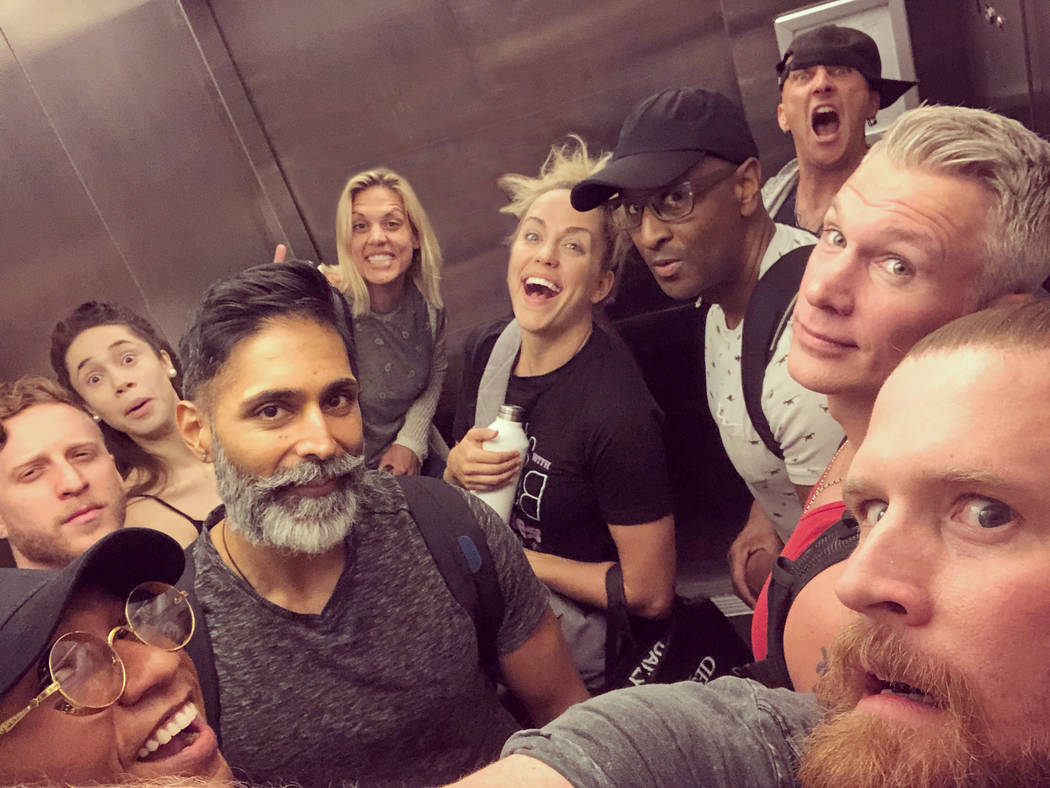 A group shot of Las Vegas vocal ensemble Vox Vegas, after they opened for Celine Dion at a private event hosted by Amway at Delano Las Vegas on Thursday, May 16, 2019. (Vox Vegas) 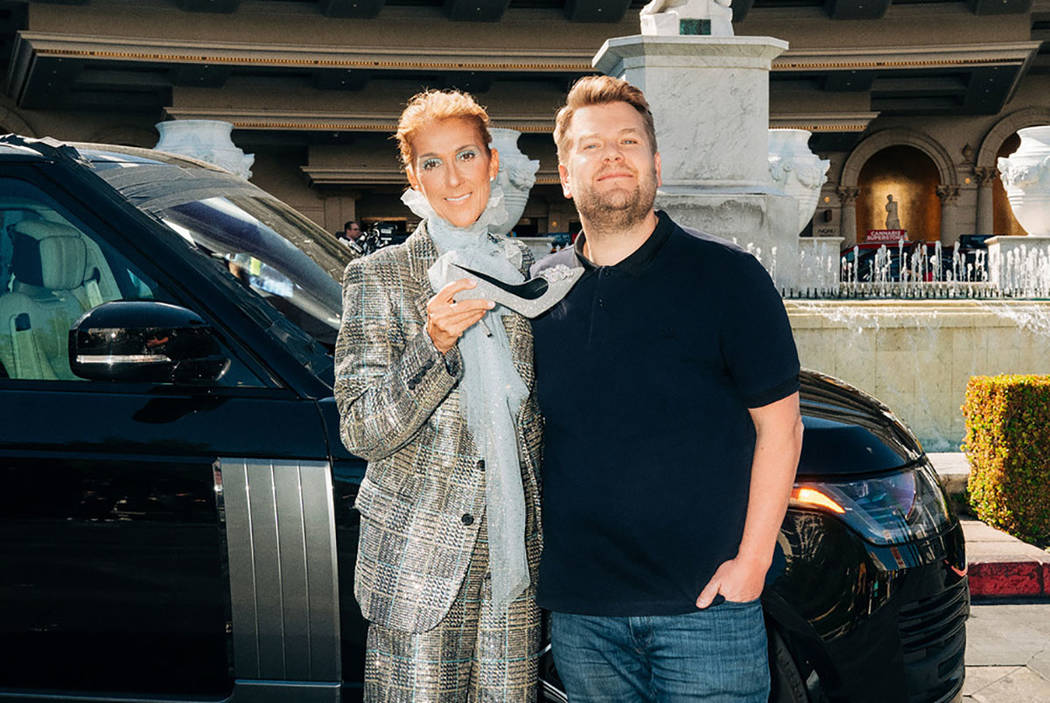 Dion performed to a packed house at Skyfall Lounge at the top of Delano Las Vegas on Thursday night. She wasn’t on the hotel marquee. Instead, the outgoing Colosseum at Caesars Palace headliner was the unbilled headliner at Amway’s 60th anniversary celebration.

If Amway officials paid Dion industry standard — say, what Bruno Mars commands for a private gig — her fee was at least $1 million.

The show was also a boon to a rising Vegas vocal group Vox Vegas, which opened the show.

The act was created by Mo5aic vocal group member Josh Huslig. The ensemble performs corporate gigs and pop-up shows wherever possible, playing off its Vegas affiliation but keeping busy outside the city.

The numbing reality for Vegas entertainers is there is often more work outside Vegas than in town for Vegas-style groups.

“We’re built to basically promote Las Vegas,” Huslig says. “We do most of that outside of Las Vegas.”

But this night was on the Strip, co-starring one of the city’s most famous headliners.

“They asked me to put a night together,” says Huslig, who had no idea who else was on the bill. “We have a customized, free-form experience. Like an a cappella group on steroids.”

“We came in and gave them everything but the kitchen sink,” Huslig says. “We really warmed them up to a climax for this big, reveal moment.”

There were a few moments of disbelief among the band members as Celine was introduced.

“We only knew it was a huge name,” Huslig says. “When it was Celine, we kind of stopped and were like, ‘Is that really her?’ In this city, you never know. It might be someone from ‘Legends.’ But then it was obvious who it was, and it was, ‘Wow, OK.’ We were very happy to be part of this huge night.”

On the topic of Celine … the segment Dion and James Corden recorded on March 22 for “Carpool Karaoke Primetime Special” airs at 10 p.m. Monday.

The two drove along the Strip in a black SUV, and on a watercraft on Lake Bellagio. So, expect the requisite “Titanic” theme to be part of this traveling medley. They even stopped to fill their rig with gas (apparently “I Drove All Night” can’t happen on an empty tank).

Steven Tyler has once more invited Howard Stern to Vegas for Aerosmith’s “Deuces are Wild” residency at Park Theater. Tyler took to Twitter on Friday to openly request and audience with Stern, posting, “HEY @HOWARDSTERN IF YOU COME AGAIN TO OUR SHOW IN VEGAS THEN WE’LL COME AGAIN TO YOUR @STERNSHOW- AND I PROMISE TO KEEP WHAT YOU TEXTED ME BACK A SECRET #HOWARDSTERNCOMESAGAIN.”

HEY @HOWARDSTERN IF YOU COME AGAIN TO OUR SHOW IN VEGAS THEN WE’LL COME AGAIN TO YOUR @STERNSHOW– AND I PROMISE TO KEEP WHAT YOU TEXTED ME BACK A SECRET😉#HOWARDSTERNCOMESAGAIN #DEUCESAREWILD https://t.co/DZZX5ppbAv

Tyler also retweeted my interview with Stern from last week, centered on the release of Stern’s latest book “Howard Stern Comes Again.” At the end of that chat, I had asked Stern about coming out to Vegas. Tyler had earlier texted Stern, asking him to see the show, and a segment of that message was posted on Stern’s website.

So: This all could well lead to a historic summit of rock and broadcast icons. As a friend of Tyler’s told me, “Steven and Howard are great, mad friends and have a real bromance. The short list of people Steven idolizes starts with Mick Jagger, McCartney and Howard Stern — in any order.”

Give it UP for The Hot Club of Las Vegas, heading the Jazz Brunch at NoMad Hotel. Vegas’ A-plus artists Mundo Juillerat, Noybel Gorgoy, Johnny Miles and Chris Davis have long been something of a hidden gem in Vegas. But the gypsy-jazz act has a regular Strip gig, from 11 a.m.-2 p.m. Sundays. The food is delish, the Soft Mocktail menu refreshing and the vibe uber-groovy.