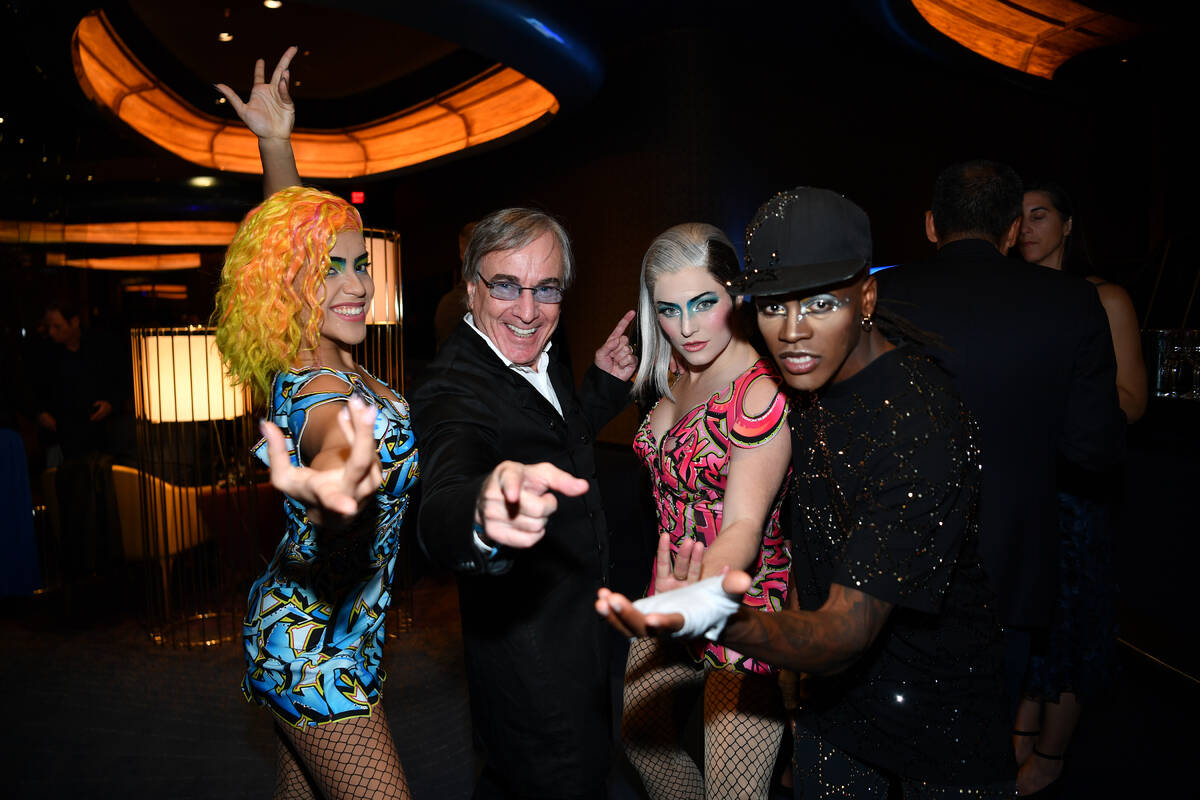 Cirque do Soleil Executive Vice Chairman Daniel Lamarre (second from left) is shown at the La Cuvée One Drop 2022 event at Rivea by Alain Ducasse at Mandalay Bay on Saturday, Nov. 12, 2022. (Denise Truscello) 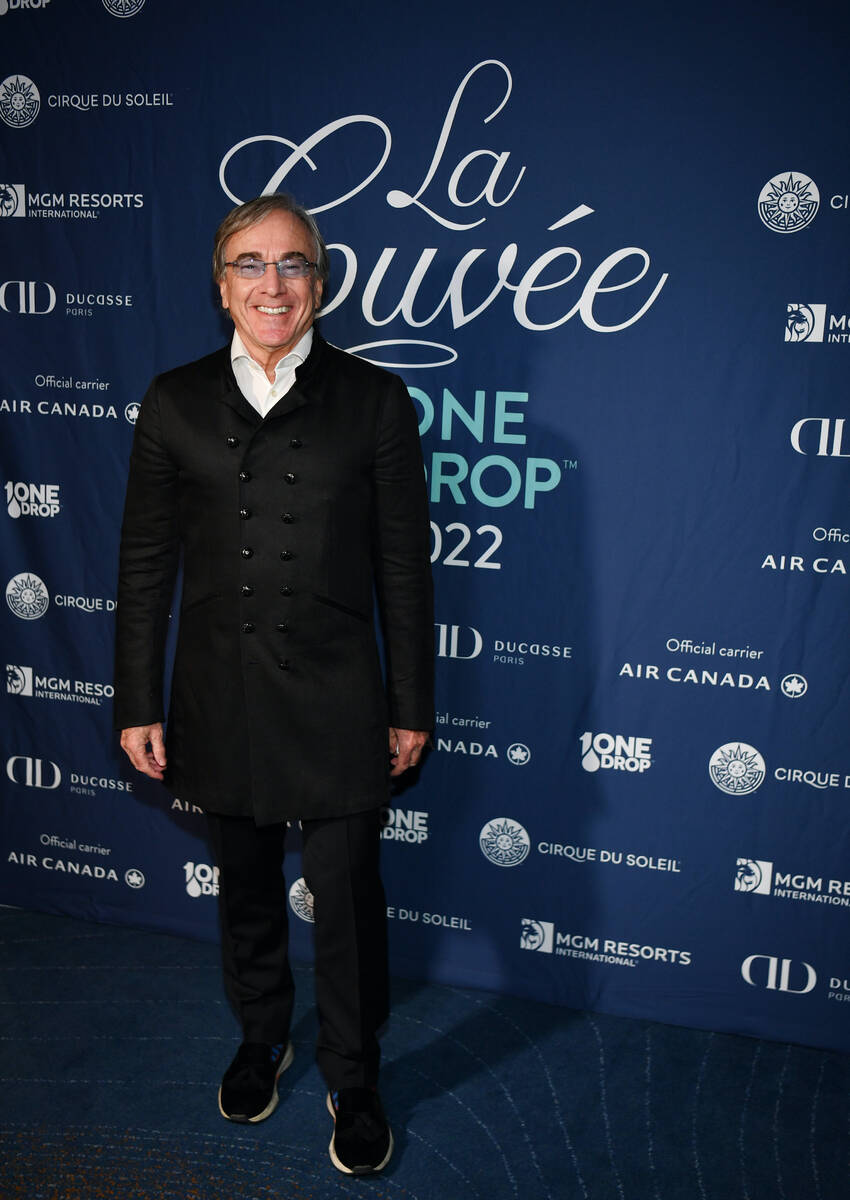 Daniel Lamarre is seated outside Palio restaurant at Bellagio. This is a familiar spot for our catch-up chats about Cirque du Soleil over the years. The promenade is inside the resort, but feels outside as the sun shines in.

The scene suggests the sunny Cirque logo, based on a tarot card representing the sun. There seems a new dawn for the company through its pandemic relaunch.

Lamarre, a former journalist and marketing exec, remains a central figure in Cirque’s ongoing international operations. He’s featured in the new documentary “Cirque du Soleil: Without a Net,” chronicling “O’s” reopening after the pandemic shutdown. The film was featured at the DOC NYC documentary film festival in New York on Nov. 13.

The project headed by MGM Studios allowed filmmakers unique and extensive access to Cirque’s operations, protocols and rehearsals. “Without a Net” is still seeking a distributor, with hopes to screen eventually in Vegas.

Lamarre fielded many questions, and even asked a few himself, in our latest session:

Johnny Kats: You have always been an optimist, even in the face of the company’s widespread shutdown during COVID. You must feel relieved to be here, talking about where the company is today.

Daniel Lamarre: Oh, God, yes. Do you know how many shows we’re going to have tonight, in presentation, around the world?

Thirty-eight. And remember, 16 months ago, we had no shows.

Las Vegas still leads the company, and led the pandemic reopening with “O,” which was captured by the documentary. Are you happy with the final product?

Yes. We have, now, the full story of the relaunch. They shot, if I’m not mistaken, 400 hours. So, it’s a big, big production … there was a lot of emotion. It was quite an experience.

The momentum established by “O” and also “Mystere” gave the company a lot of confidence that it could return to form on the Strip, right?

I have to keep my fingers crossed here, but I’m pretty sure that we will surpass our 2019 numbers in Vegas this year.

We are doing very well. At “O,” we’re almost sold out every night. That is a good example of the resurgence of Cirque. It’s like, after the crisis, people want to see it again. I saw it last night, and my God, the public’s reaction was just great.

You’ve opened “Mad Apple” at New York-New York this year, and I understand it is doing well.

It’s doing very, very well. What’s good about “Mad Apple” is that you can just move acts in and out, because it is a cabaret show. It will keep piquing the interest of people, and it is a good format for return business.

Tell me about “Love.” We know it is signed to perform through 2023 as The Mirage is turned over to Hard Rock Hotel. What happens after that?

I just met the guy who is the hotel’s leader here, Joe Lupo (formerly of Hard Rock in Atlantic City), yesterday. Great guy. He’s gearing up so they can jump in and take over. … But obviously we are committed for all of 2023. Then the reality is we don’t know in detail what will happen. There are two main factors: How will their construction timetable work out, and how is the show going to continue to perform? But right now, it is doing very well.

That means business is improving for “Love”?

That international appeal is interesting. Is there any discussion about taking “Love” on tour?

Not yet. We want to know what’s going to happen at The Mirage first. As I said, it’s not clear, but I’m very encouraged by the performance of the show right now.

We’ve had some impressive shows open recently on the Strip, including “Awakening,” at Wynn Las Vegas. It’s a show that has great production value and great scale, similar to your biggest shows. Have you seen it?

Yes. They spent a ton of money. (Laughs). It has great visual effects. I don’t know how it will break in this city right now, with everything there is to see. … I don’t know how you would rate it, because it is so different. Would I recommend it to someone to see before “O” or “Mystere”? I don’t know. Obviously, I’m biased. That’s why I am very careful.

You’ve just released an autobiography, “Balancing Acts,” about your time with Cirque. Why write that now?

The way I feel right now is the same way I felt in our glory days at Cirque, meaning when we opened the Beatles (“Love”) and “Ka,” “Michael Jackson One.” My phone was ringing all the time. Everybody around the world wanted to have a show of Cirque du Soleil. That feeling is back at Cirque, because there was so much coverage about our rebirth. People are seeing it as, “Oh, my God, that brand must be so, so strong, that they’ve been able to go through the crisis and be successful now.” I’m receiving as many phone calls as I used to receive in our best years, and that’s exciting.