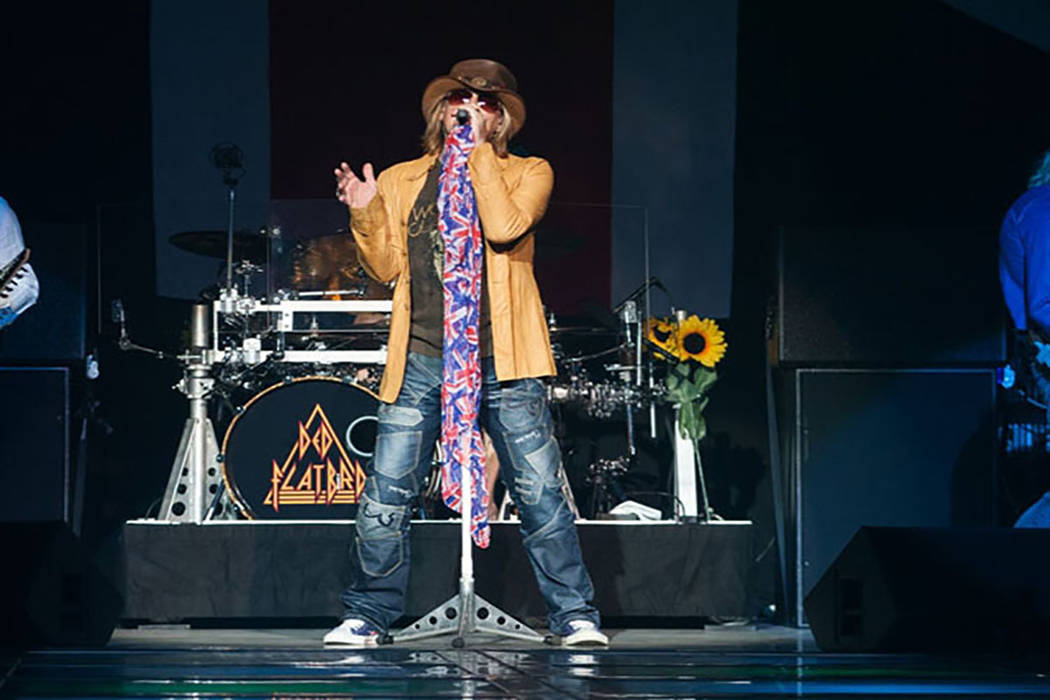 Def Leppard performs during the first show of their residency at The Joint at the Hard Rock Hotel on March 22, 2013. (Courtesy) 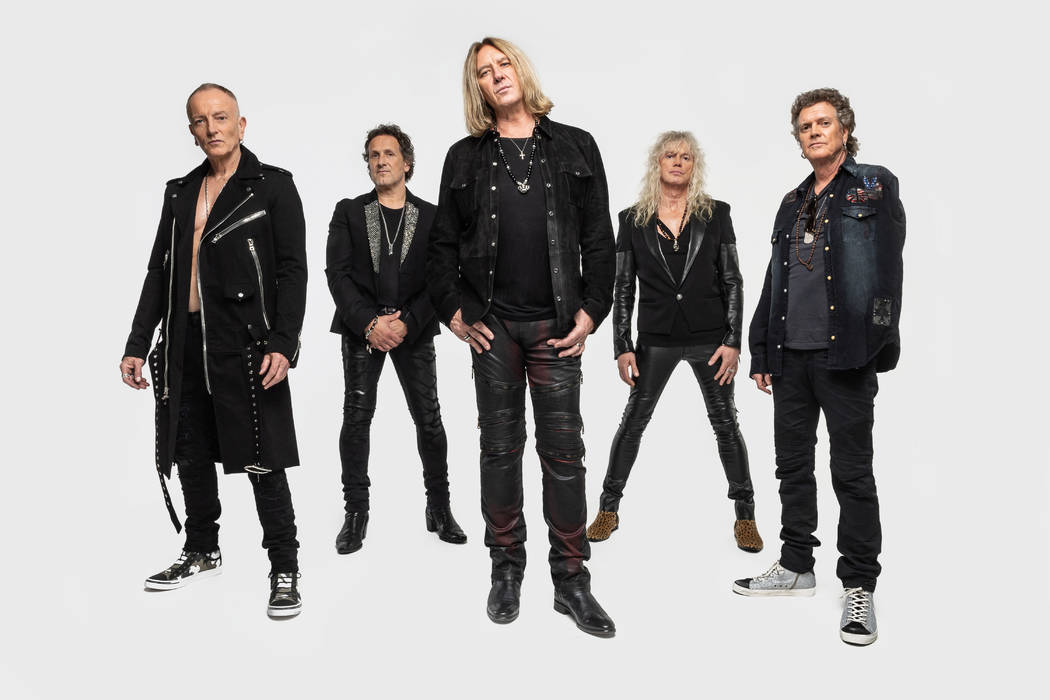 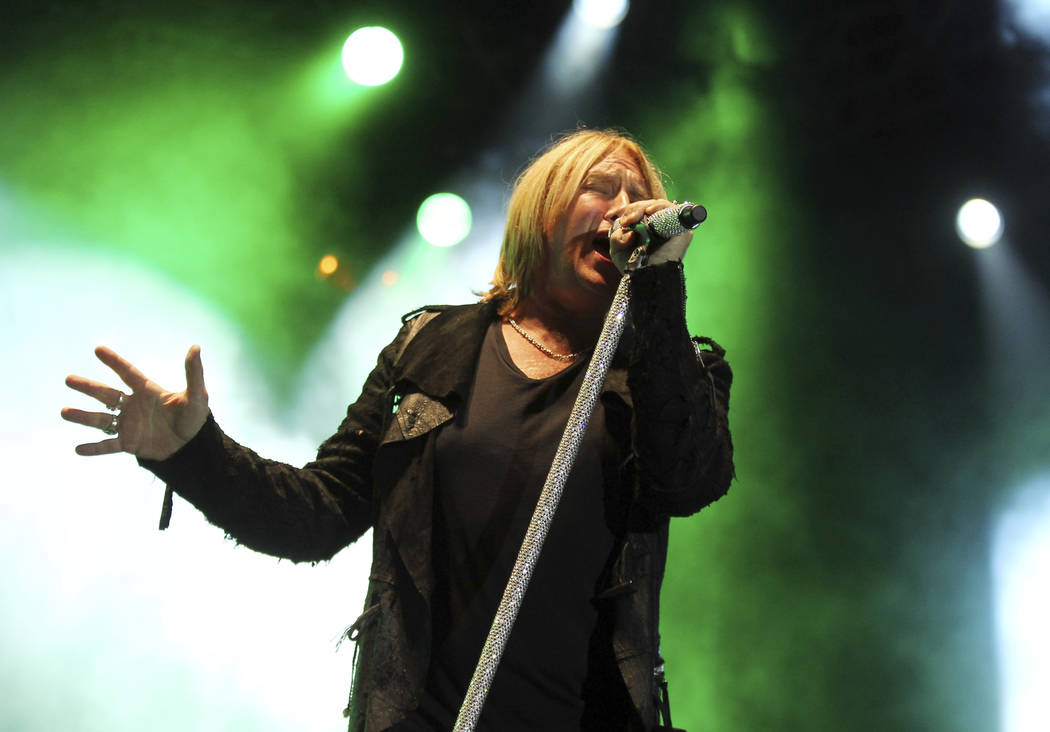 FILE - This June 8, 2012 file photo shows Joe Elliott performing with the band Def Leppard at the after party for the "Rock of Ages" premiere in Los Angeles. Def Leppard will join Janet Jackson, Stevie Nicks, Radiohead, the Cure, Roxy Music and the Zombies as new members of the Rock and Roll Hall of Fame. The 34th induction ceremony will take place on March 29 at Barclays Center in New York. (Photo by Matt Sayles/Invision/AP, file) 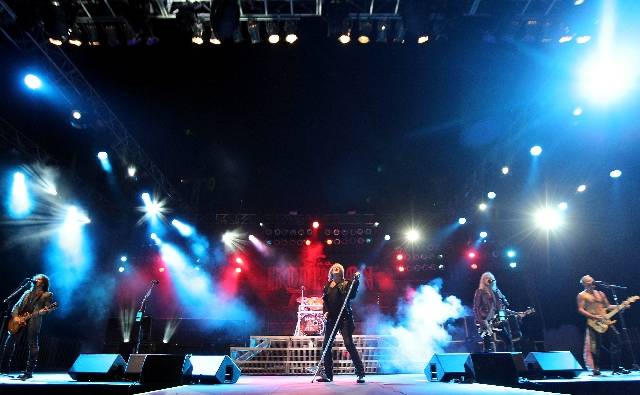 Def Leppard plays at the after party for the Rock of Ages premiere in June 2012 in Los Angeles. (Courtesy)

Those lyrics are copped from Def Leppard’s “Rock of Ages,” from the blazing 1983 album “Pyromania,” and they are not randomly applied. The British rockers are opening a 12-show series at Planet Hollywood in August.

“Def Leppard Hits Vegas: The Sin City Residency” launches Aug. 14 at Zappos Theater and runs for select dates through Sept. 7 (tickets start at $60, not including fees, and go onsale at 10 a.m. Feb. 22 at ticketmaster.com/defleppard or at the Planet Hollywood box office).

Founded in 1977, Def Leppard will be inducted into the Rock & Roll Hall of Fame on March 29. “The Sin City Residency” follows the band’s “Viva Hysteria” run at The Joint at the Hard Rock Hotel, an 11-show spree in March-April 2013.

“Five years ago, we played our first ever residency in Las Vegas, which was relatively new ground for a rock band giving this kind of experience,” front man Joe Elliott said in a statement issued Wednesday morning. “I have to say, we really enjoyed it! Being in one place for the best part of a month is vastly different to our normal city to city touring routine. Breaking this cycle adds another element to the experience for both us and the audience.

“We look forward to seeing you at the Zappos Theater this summer!”

Def Leppard’s lineup for the Strip run is the ever-familiar Elliott as vocalist, Phil Collen (guitar), Rick “Sav” Savage (bass), Vivian Campbell (guitar) and Rick Allen (drums). The band released consecutive, chart-topping albums in the early and mid-1980s, “Pyromania” and “Hysteria,” and classic-rock hits “Rock of Ages”, “Pour Some Sugar on Me” and “Foolin.”

The announcement of the Def Leppard series arrives just a day after the band’s hard-rock contemporaries Aerosmith announced it had tacked on 17 dates to its “Deuces Are Wild” run at Park Theater.

Though Aerosmith is playing 35 dates at Park Theater this year, and both bands are promoted by Live Nation, none of their shows coincide. Still, the booking of two legendary rock bands signals the heightened competition for top acts between Zappos Theater and Park Theater.

Caesars Entertainment President of Entertainment Jason Gastwirth checked in with, “Planet Hollywood transformed the entertainment landscape in Las Vegas with the first pop residency. We are proud to be at the forefront of rock residencies as well and treat the city’s visitors to a new type of experience with Def Leppard.”

Gastwirth was referring to Britney Spears’ “Piece of Me” run at Zappos Theater from 2013-2017.

This variety of “rock residency” dates at least to Carlos Santana’s extended engagement at The Joint from March 2009-May 2011. In the days when it was known as Aladdin Theatre for the Performing Arts, the Zappos Theater was the primary stage for touring rock acts on the Strip. In fact, a famous rock band riding the success of a top-selling album stopped at the TPA in September 1983 — Def Leppard, touring behind “Pyromania.”