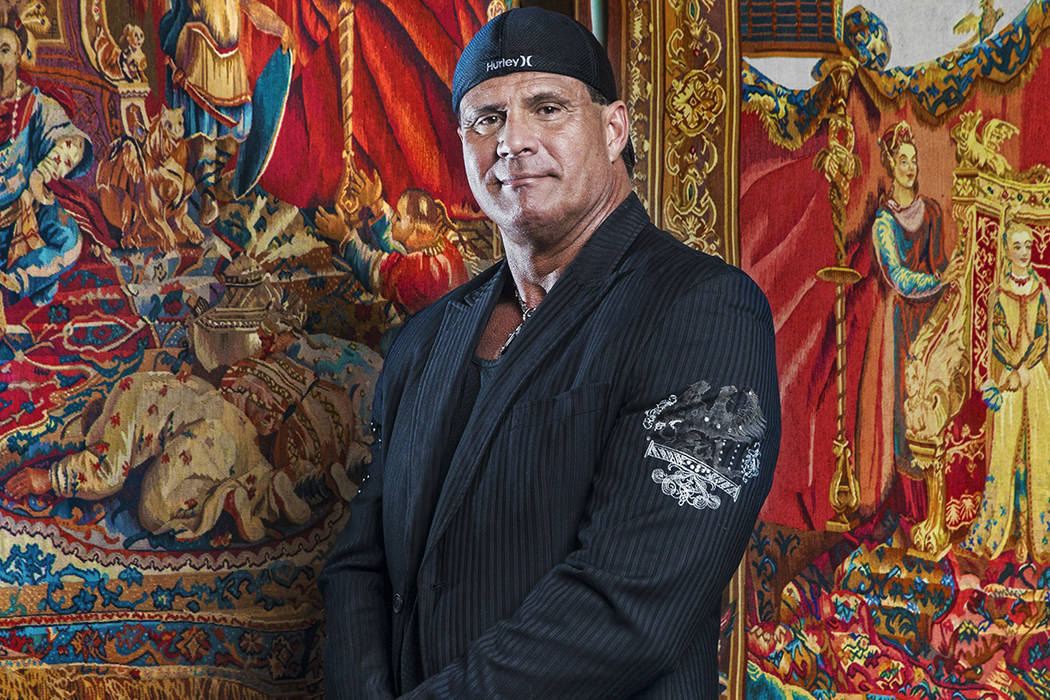 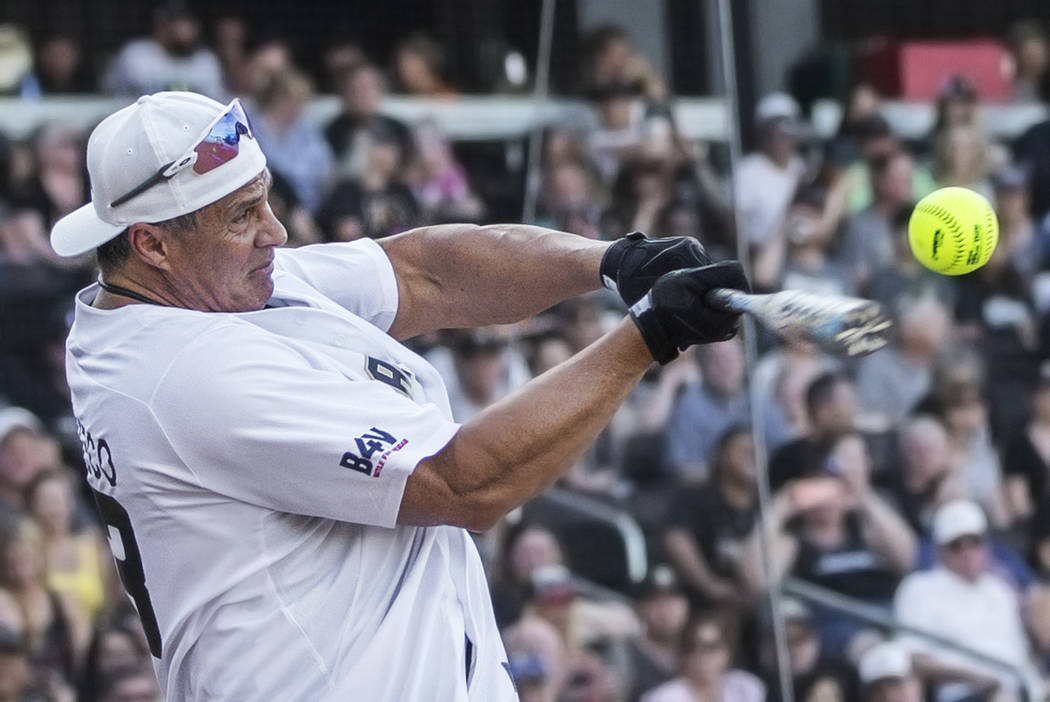 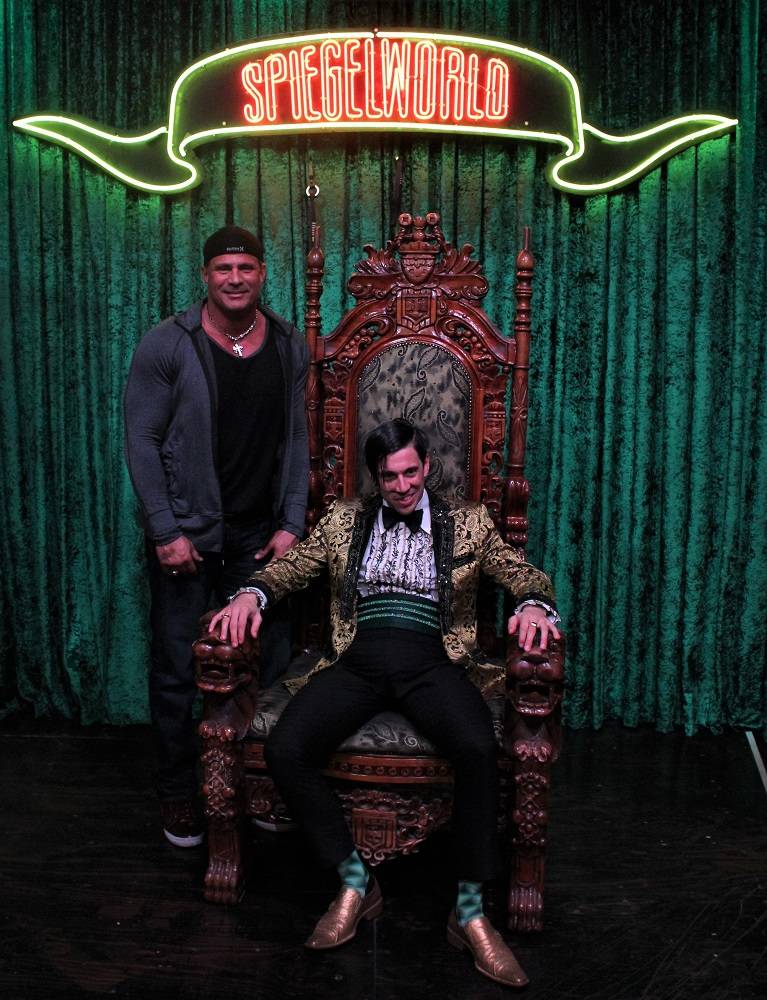 Ex-Major League slugger Jose Canseco is shown with The Gazillionaire at "Absinthe" at Caesars Palace on Wednesday, Jan. 24, 2017 (Joseph Sanders/Spiegelworld)

It was the quintessential 1970s soul band Rose Royce that advised, “You might not ever get rich. But let me tell ya, it’s better than diggin’ a ditch.”

That’s in reference to working at the car wash (yeah). You know who agrees? Jose Canseco, who actually does have the riches to open his own car wash (yeah) on Saturday in Las Vegas.

The ex-big league slugger and one-time Las Vegas Strip co-headliner (in “Renegades” at Caesars Palace) is unveiling Showtime Car Wash at at 5893 W. Tropicana Ave. on Saturday morning. Those who arrive between 10 a.m.-1 p.m. can meet and have photos taken with Canseco, who lives in Las Vegas.

There will be a mobile Axe Monkey attraction on site, with founder and Paris Las Vegas hypnotist Anthony Cools on hand. Canseco will occupy a dunk tank (so maybe Roger Clemens will show up), and a few other family friendly attractions will be set up around the business. Canseco is also hosting his podcast from the event, and Canseco-branded merch (naturally) is also on sale.

In a text conversation Thursday, Canseco said, “The car wash came about because I’m a larger-than-life character and entertainer, so people are always interested in anything and everything I do. Why not make a tourist attraction that also offers a service?”

Canseco has never worked at a car wash — until now — but is known to keep his cars in terrific condition. His current ride is “a kind of super-fast Cadillac CTS-V that will be in front of the car wash, and for my slow and boring days I drive a Mercedes s550.”

The 1986 American League Rookie of the Year and ’88 American League MVP has pushed back plans for his extensively hyped Bigfoot tour, announced in February. He is talks with a couple of production companies that want to chronicle the excursion. Five interested parties have agreed to put up $5,000 to tour the Southern Nevada desert looking for Bigfoot while listening to Canseco’s tales of fancy.

“Whoever has the best offer gets to film the excursion,” Canseco says. “Otherwise I can’t talk about it.”

Canseco does have a call on the World Series (he has a pair of rings, one with the 1989 A’s and another with the 2000 Yankees). The Astros are still in it, “But they have to win Friday.” Otherwise, their season is, to borrow a term, a wash.

Word around the scene is Elton John is interested in a return to the Colosseum at Caesars Palace after his current “Farewell Yellow Brick Road” tour closes at London in December 2020. The artist himself is reportedly interested in coming back to the refurbished venue.

IHeartMedia has moved its Las Vegas headquarters to the second level of the Fremont Street Experience office complex, connected to the FSE parking garage. The iHeart entrance at the base of the Slotzilla Zipline (this should make for some interesting staff meetings).

The crew hauled in Wednesday, and this is a major development for the iHeart operation and also for FSE, which is about to formally unveil its new Viva Vision video show in time for New Year’s Eve.

On the topic of downtown

Ken Henderson of Best Agency reports that his Notoriety project at Neonopolis should be open in mid-November. Crucially, the liquor license has been approved for the multiple-venue entertainment fortress, which takes over the former Krave Nightclub and Galaxy Neonopolis 11 movie-theater complex.

Lady Gaga has posted photos and a video of her post-show therapy routine at Park Theater, in which she drops into a tub of ice water. The cold dip looks like a chilling thrill ride at Wet’n’Wild.

Gaga also posted a clip while singing along to “Human Fly” by The Cramps. In response to a fan accurately identifying the tune’s title, Gaga said, “It’s my theme song.”