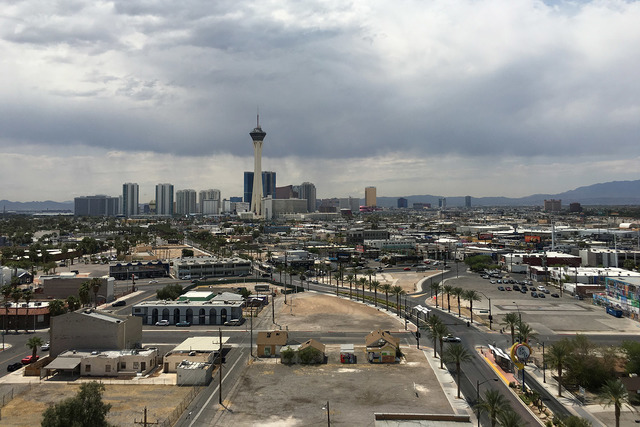 A favorite Kats! bureau outpost is this condo deck at the Arts District, facing the Strip. (John Katsilometes/Las Vegas Review-Journal)

The Kats! bureau at this writing is a condominium deck high above the Las Vegas Arts District. Below this perch, a guide on a double-decker tour bus is informing passengers via loudspeaker that they will soon pass Gold &Silver Pawn, where the History channel TV show “Pawn Stars” is filmed.

Usually this is how I wake up, with the tour guide caterwauling about Rick, Chumlee, Big Hoss and the Old Man, as if reminding me once more of where I live.

I am facing directly toward the Strip, which seems not so much a strip but a cluster of giant hotel-casinos as viewed from this angle. Standing tall in the middle of that stack of resorts is the Stratosphere, which had just opened when I moved to Las Vegas more than 20 years ago. At the time, the Stratosphere was simply ominous to a guy who had just moved to Vegas from Redding, California. This structure seemed unreal, other-worldly, and not something you’d feel comfortable observing from your backyard.

But I would soon learn to love the place. The first show I attended in Las Vegas was by the Strat’s star impressionist, the late Danny Gans, a man whose fame never did match his often confounding talent. I remember wondering after Gans had rolled through a series of impressions of legendary entertainers — George Burns, Sammy Davis and even Kermit the Frog — why this person was not an international star. I would learn over the years that, in Las Vegas, such talent is commonplace. An embarrassment of riches, as it were.

Less than three months after moving to Las Vegas, I visited “Mystere” at TI for the first time. I was once more dazzled by the level of artistic talent offered by an organization I would know very well, the predominant production company Cirque du Soleil, whose tiny-but-taut artists inspired me to join Las Vegas Athletic Club.

Later that night I walked the Strip with a new colleague. When we passed The Mirage, the hotel’s volcano erupted in a burst of fire and sound. I stopped and shook my head, and his comment was, “You’re not in Kansas anymore.” Sub Northern California for Kansas, and he was on the mark.

My first tour at the RJ, as a sportswriter, was (shall we say) truncated after a couple of years. In the 18 years since, I have spent what seems a lifetime covering the city for the Las Vegas Sun and Greenspun Media Group, an immensely rewarding and unforgettable span of time. In this stretch, I absorbed Las Vegas’ indefatigable pace and unique personality while working in myriad capacities, covering the city’s many facets and meeting its most dynamic newsmakers.

The culmination of it all is Kats!, a column that is expressly one man’s take on Las Vegas. My charge is to treat the city as a participation sport, to home in on the energy, pull out the groovy stuff and relay it to you all. It’s work if you consider flying around the city every night as “work.”

People often say to me, “I live vicariously through your social media posts,” while asking, “When do you sleep?” The answers are usually, “Great!” and, “How about now?”

You’ll find my coverage, and myself, at such haunts as Vinyl at Hard Rock Hotel for Mark Shunock’s Mondays Dark; the Palazzo for the shows “Baz” and Clint Holmes’ “Between the Lines”; The Venetian for “Puppet Up! Uncensored”; the Linq for Jeff Civillico’s “The Weekend in Vegas” internet-TV show; Kenny Davidsen’s “Bow Tie Cabaret” and “Playlist” shows at Tuscany Suites and Kelly Clinton-Holmes in that same room; Chris Phillips of Zowie Bowie in “Vegas … Straight Up” at Grandview Lounge and Travis Cloer of “Jersey Boys” in his solo “With a Twist” show in that same room; the incredible Earl Turner at South Point Showroom; Buddy Greco’s 90th birthday party at the ever-swanky Italian American Social Club; Rod Stewart and Reba and Brooks &Dunnat the Colosseum at Caesars Palace; Matt Goss at the Gossy Room and “Absinthe” on Roman Plaza, also at Caesars; Keith Thompson’s The Composers Showcase of Las Vegas at Cabaret Jazz and Frankie Moreno in that same room (with my sidekick, Smith Center President Myron Martin); and Wayne Newton tackling the celebrity version of “Who Wants to Be a Millionaire” at the longtime Jubilee Theater at Bally’s (I was The Wayner’s lifeline in a show to air on a yet-announced date, because this is what happens in my life).

And all of that was just in the past month.

I will focus on anything or anyone I find fascinating, whether it’s Britney Spears or the great Spears impressionist Derrick Barryfrom “Frank Marino’s Divas Las Vegas” at the Linq (Derrick is a dangerous individual while in his Brit costume, trust me). Some days seem too surreal to believe, as when I chatted with Gov. Brian Sandoval at the Park ribbon-cutting in the morning and hung out with Carrot Top at Luxor that night. “The governor says to tell you hello,” I joked to the legally named Scott Thompson, whose response was, “Nice!”

You will see frequent references in this column to VegasVille, which envelops both the city’s internationally famous Vegas brand and its small-community characteristics — the “Ville” of it all. Folks who move here are typically taken by the tight community of entertainers and execs (and journalists) who have bonded in Las Vegas.

And the title of “Kats!” with that exclamation mark, is a nod to my friend Norm Clarke, who carved the path for a man-about-town column in Las Vegas. “Norm!” in print and in person, was a favorite of mine, for all time.

So if you’ll allow me to serve as your Uber ride, or designated driver, I would be honored. I just ask that you buckle in, and hang on.