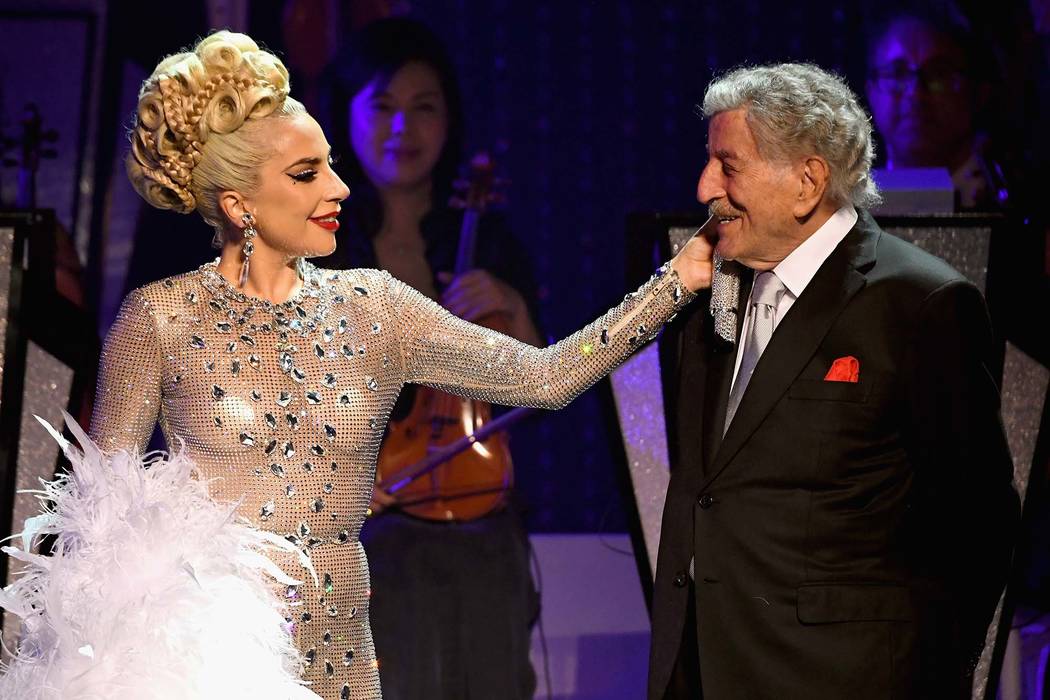 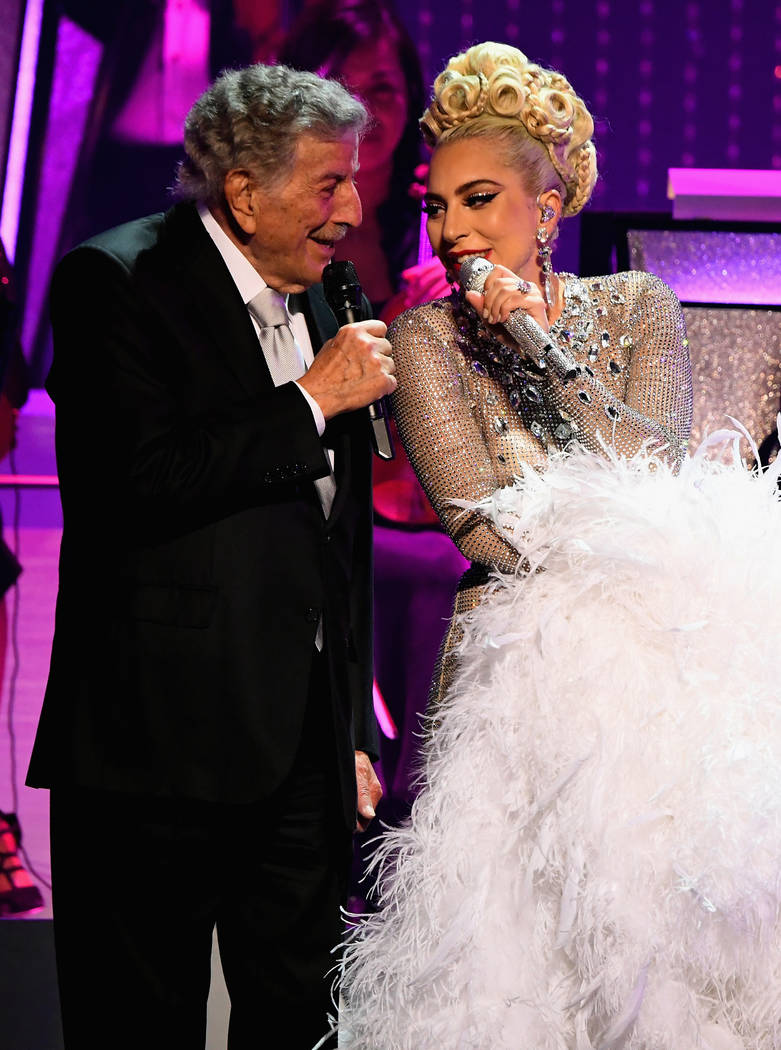 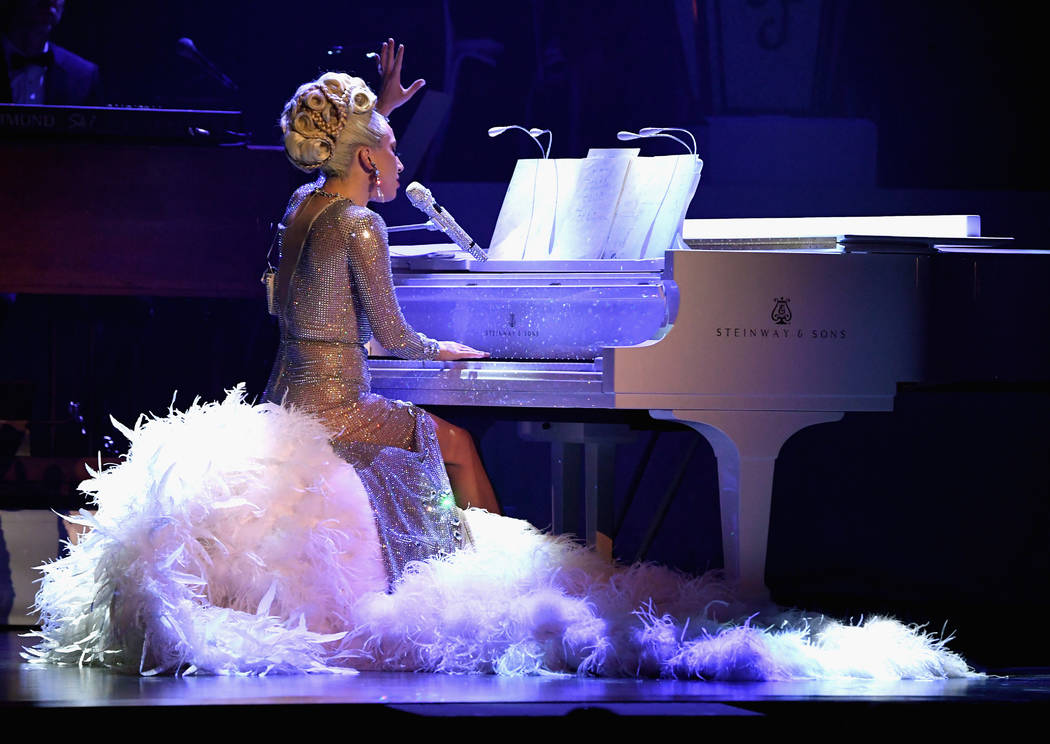 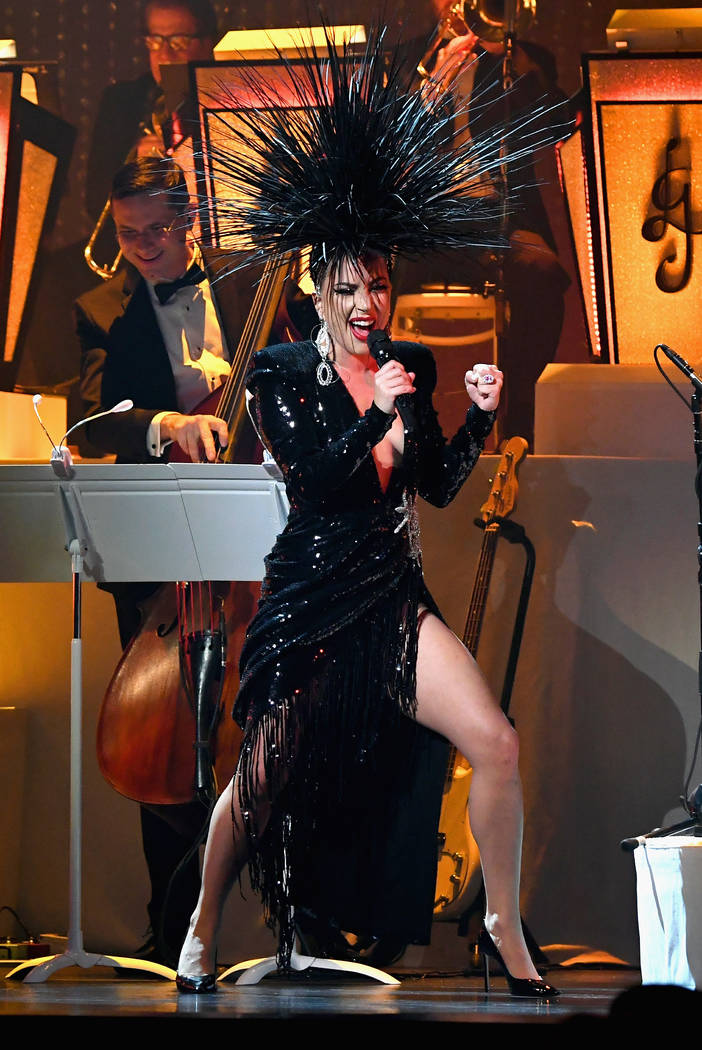 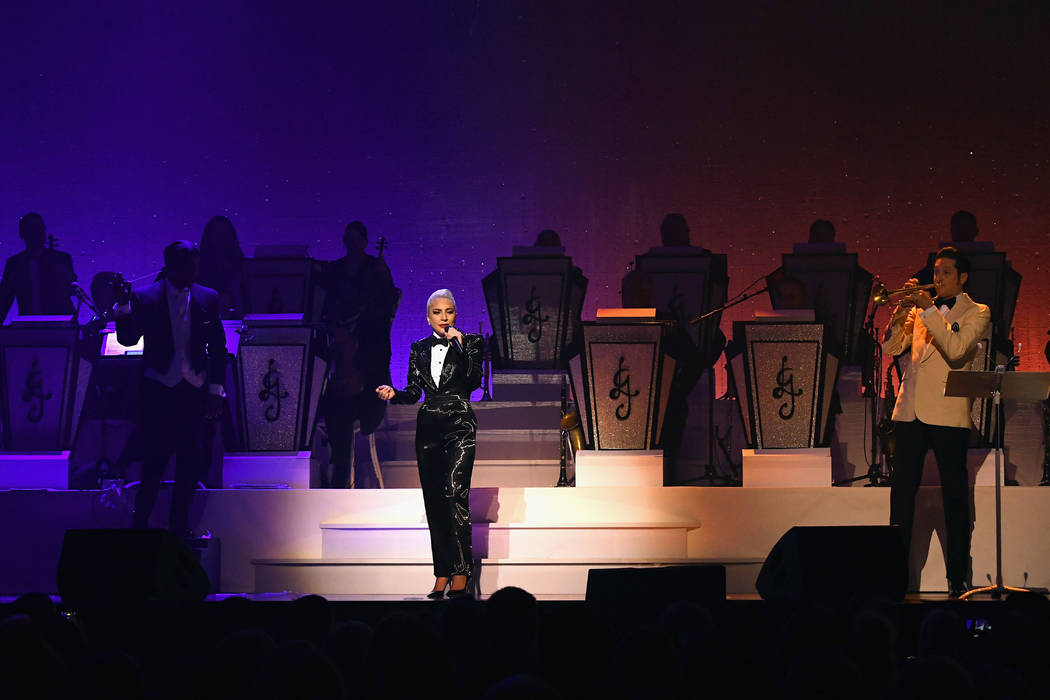 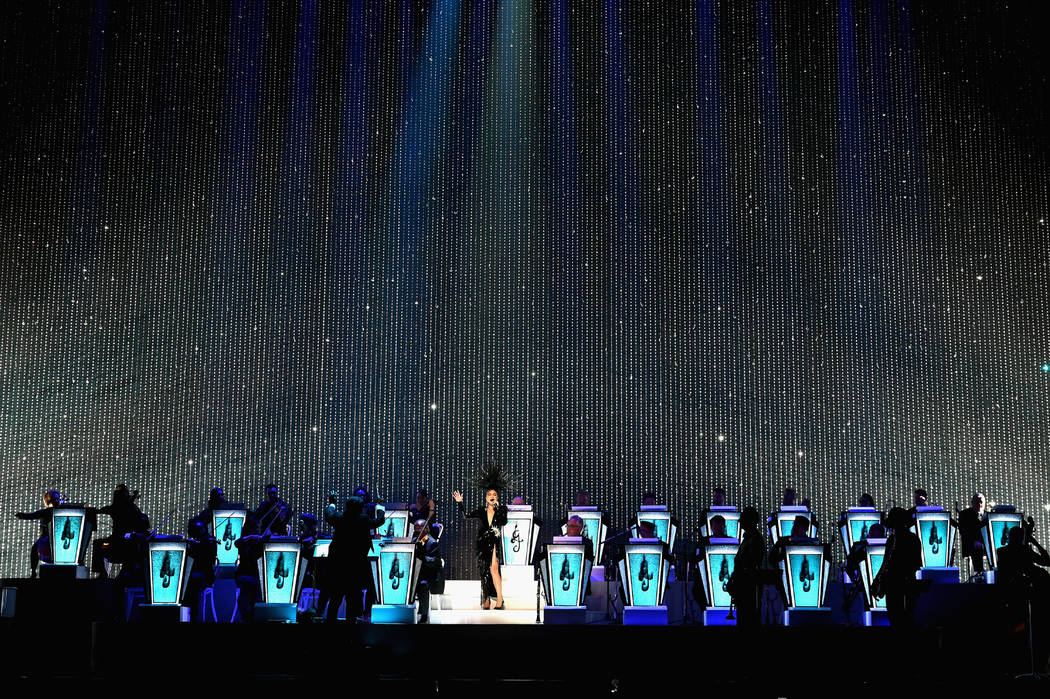 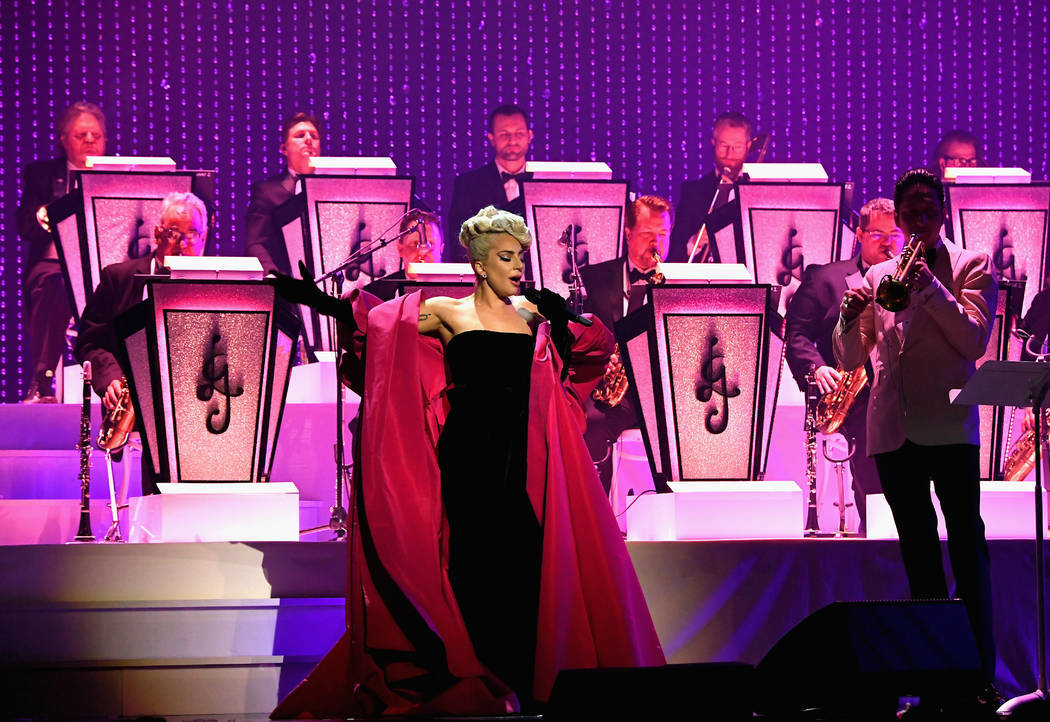 Lady Gaga said in introducing her duet partner at her first “Jazz & Piano” show at Park Theater on Sunday night, “We have a special guest tonight! I wonder who it is! I bet YOU’RE not wondering!”

A huge cheer went up. Everybody knew. Wearing a silver-sequined gown, Gaga followed with, “Ladies and gentlemen, the one. The only. The legendary Mr. Tony Bennett!” Bennett appeared, smartly attired in a traditional tux, then strode to the stage. The two hugged as the crowd erupted.

Great setup as the duo then swung through “The Lady Is A Tramp.” With the 92-year-old Bennett beaming and still powerfully voiced, the duo also performed “Cheek to Cheek,” the title of their 2014 album and accompanying world tour. They opened that series at Chelsea at The Cosmopolitan of Las Vegas on Dec. 30-31, 2014, and later played then-Axis theater at Planet Hollywood the following spring.

Bennett arrived in Las Vegas on Saturday and spent much of Sunday in rehearsals, where word is that Gaga’s mood matched her stage name. Those who observed the run-through said she was “reverential” to her frequent stage partner.

As Bennett left the stage, Gaga remarked, “Tony, thank you for keeping jazz music alive!” She led him from the stage with, “I just want to hold him a little longer.” Then, “Now, I can’t promise you him every night. All I can do is pray that you stick around after that.”

The sold-out crowd did not leave, but stood frequently and swayed throughout the two-hour show. As anticipated, “Jazz & Piano” is a terrific run through several classics and Gaga’s re-imagined hits. The 20-piece band/orchestra (it was both or either) was loaded with great Vegas players and led by Gaga’s New York band leader, Brian Newman. The standards included “Little Cocquette,” “What a Difference a Day Makes,” “Bang Bang (My Baby Shot Me Down)” and (swapping lines with Newman) “Just a Gigolo.”

From her own hit catalog, she produced recharted versions of “Poker Face,” “Bad Romance” and an especially robust spin through “Paparazzi.” Her costumes and piano work were stunning. She actually closed with a Rat Pack-fashioned tux for a show-stopping “New York, New York.”

So much cool stuff happening up there … @ladygaga @ParkTheaterLV #Paparazzi pic.twitter.com/N8D8Ylnvk4

In her show Gaga repeatedly spoke of her jazz inspirations — name-checking Ella Fitzgerald, Billie Holiday, Dinah Washington and Bennett — in her comments to the crowd and in black-and-white videos played during costume changes.

MGM Resorts officials were reportedly reluctant to include the jazz performances in the more heavily produced “Enigma” residency, but Gaga insisted. She argued there was an audience for this presentation, and she … um, Parked it.

“We had pop shows and jazz shows, and they said, ‘I don’t know about that,’ ” the star said near the end of the show. “But guess what? The jazz shows sold out faster! We’re bringing jazz back to Las Vegas!”

The legend who kicked off the night was sure to be watching this and pumping his fist.

How we land it … @ladygaga’s jazz shows sold out faster than her pop shows. @ParkTheaterLV pic.twitter.com/RRfvGsl2O7

John Katsilometes’ column runs daily in the A section. His PodKats podcast can be found at reviewjournal.com/podcasts.Contact him at jkatsilometes@reviewjournal.com. Follow @johnnykats on Twitter,@JohnnyKats1 on Instagram.