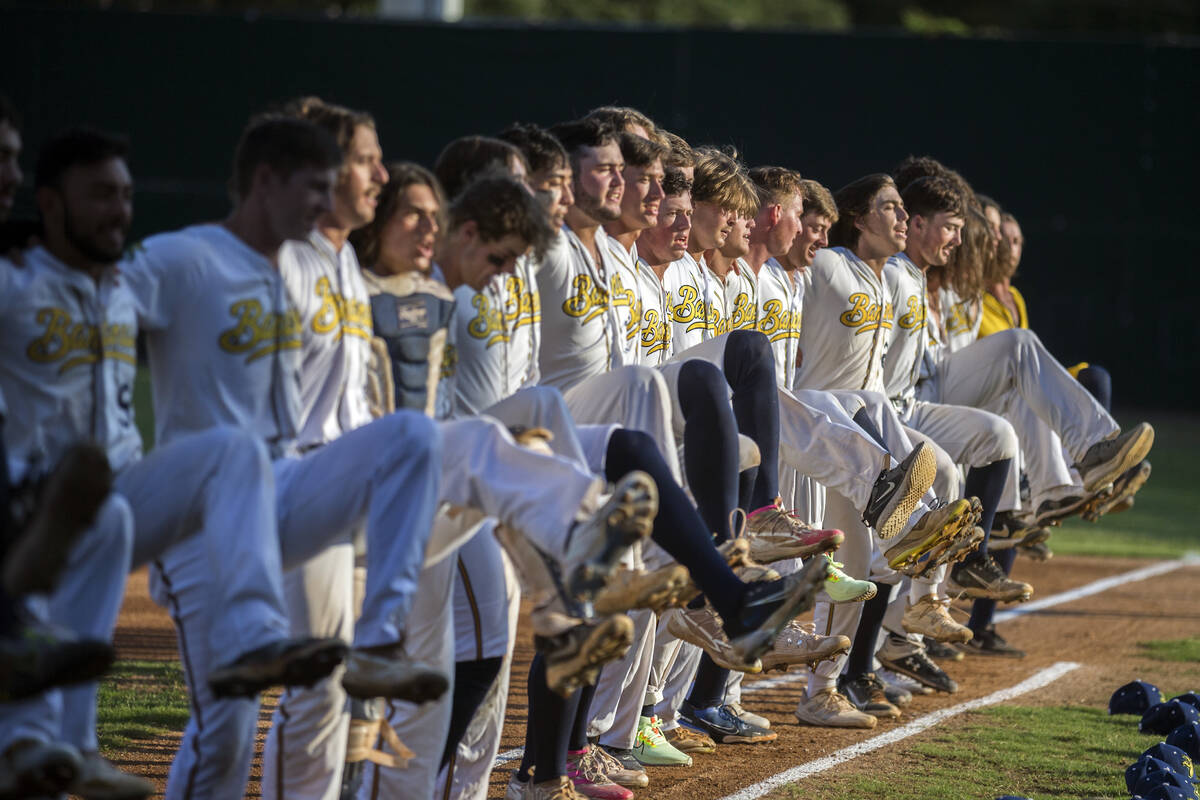 The Savannah Bananas team lines up along the first base line to perform a kick-line dance before a Coastal Plain League baseball game against the Florence Flamingos, Tuesday, June 7, 2022, in Savannah, Ga. (AP Photo/Stephen B. Morton) 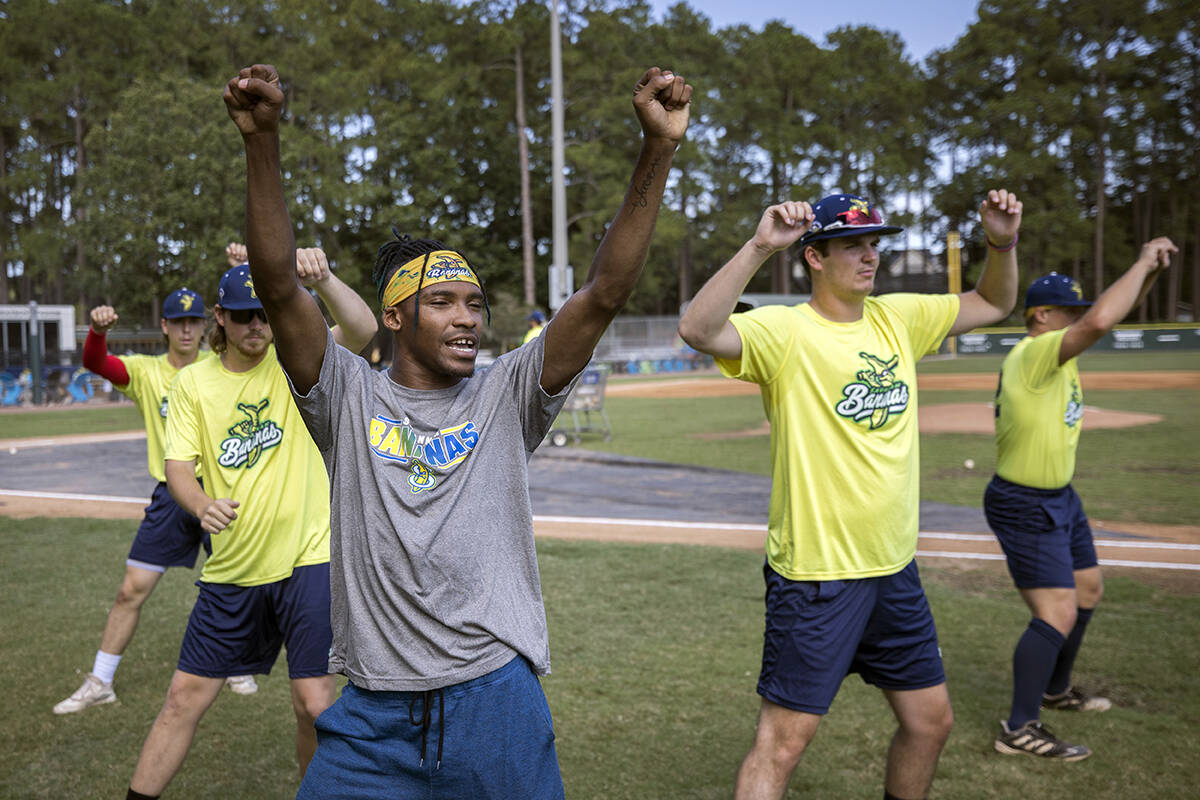 Savannah Bananas first base coach Maceo Harrison, foreground, teaches a dance routine to members of the team before they play the Florence Flamingos, Tuesday, June 7, 2022, in Savannah, Ga. (AP Photo/Stephen B. Morton) 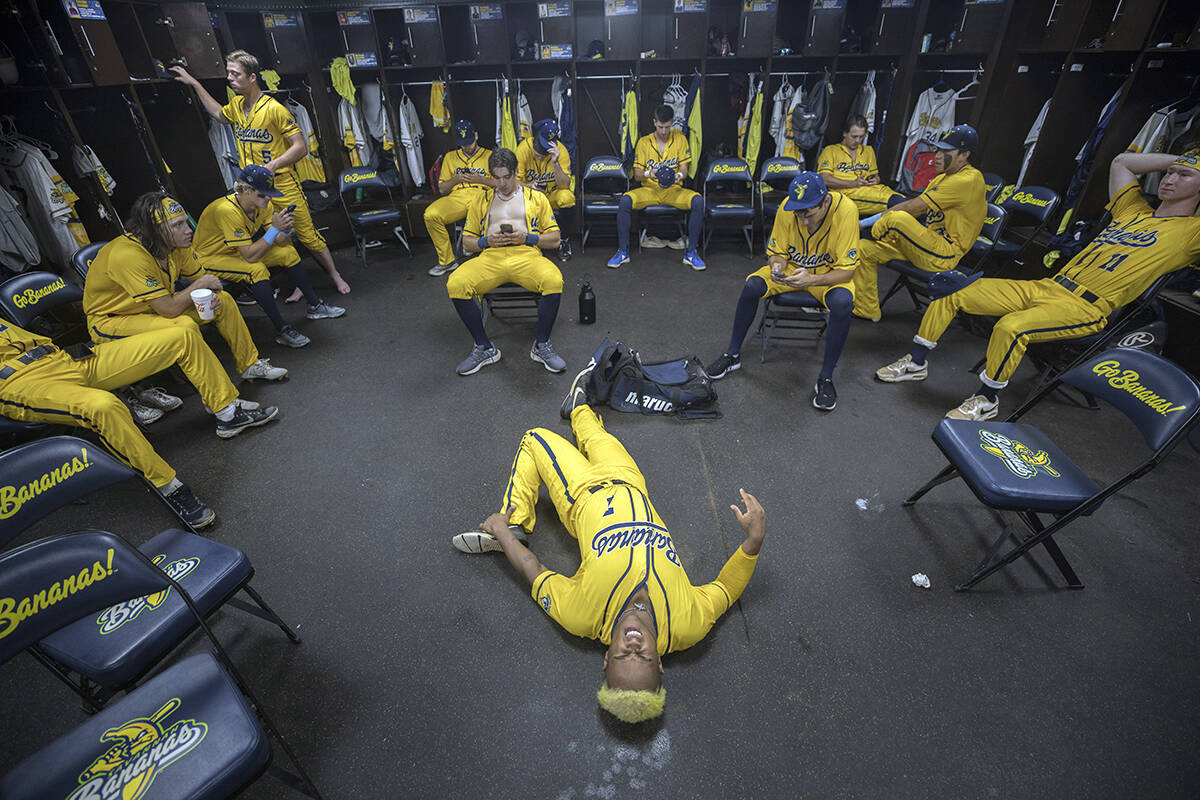 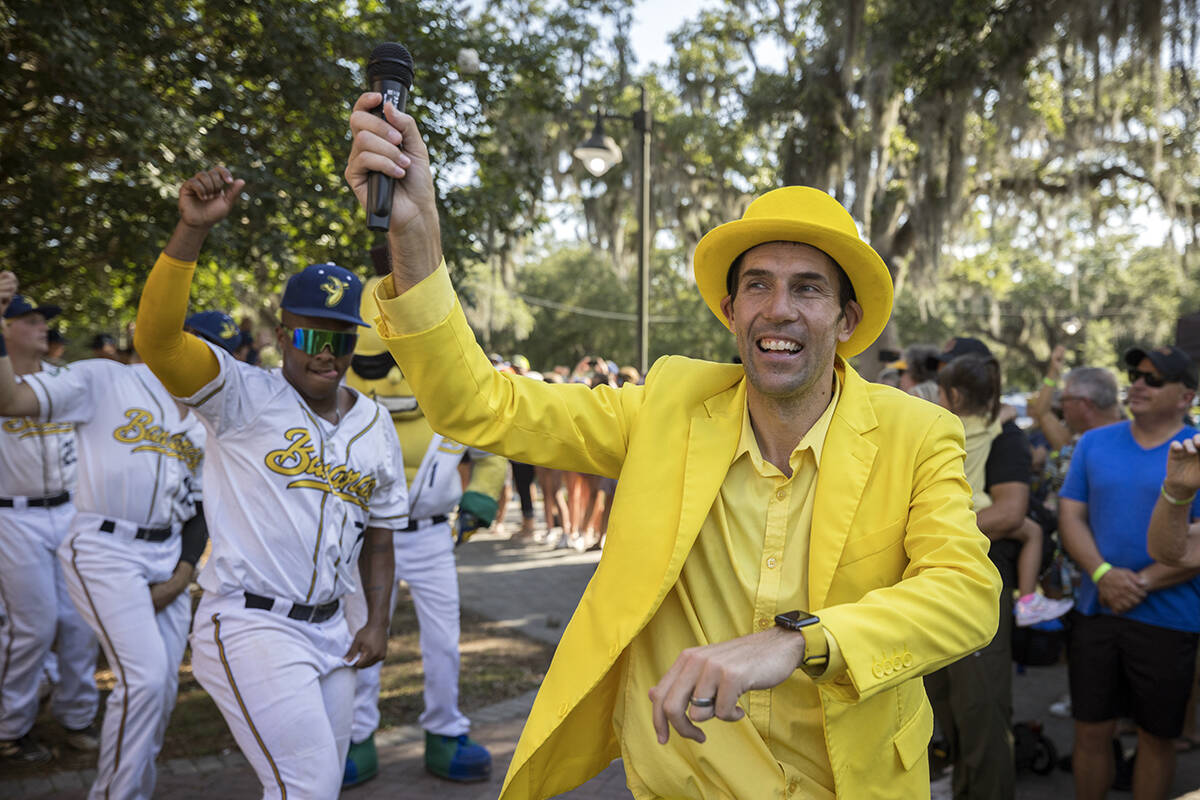 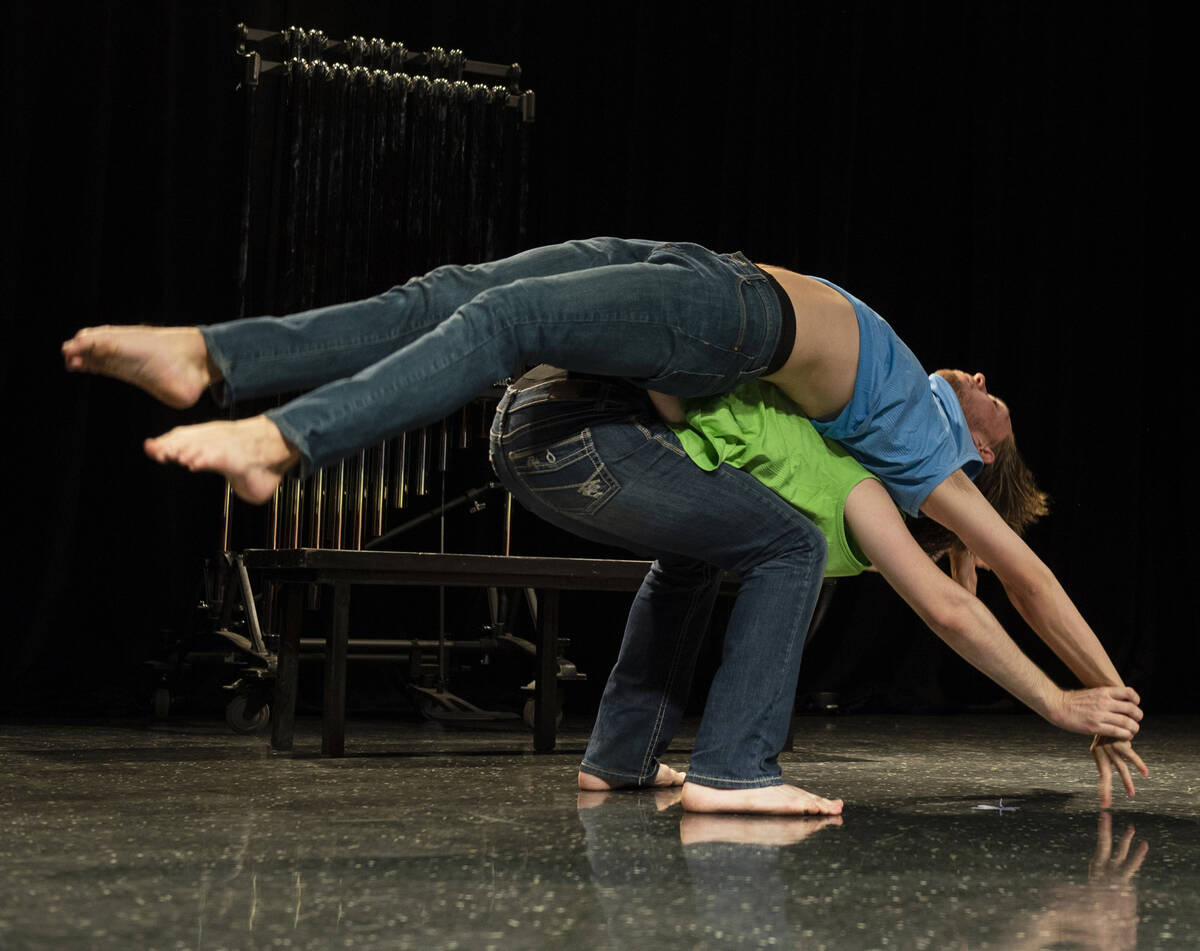 Zack Frongillo, top, and A.J. Vehec perform during a dance piece at a remembrance ceremony surrounding the One October shootings at UNLV in Las Vegas, Monday, Oct. 1, 2018. (Las Vegas Review-Journal) 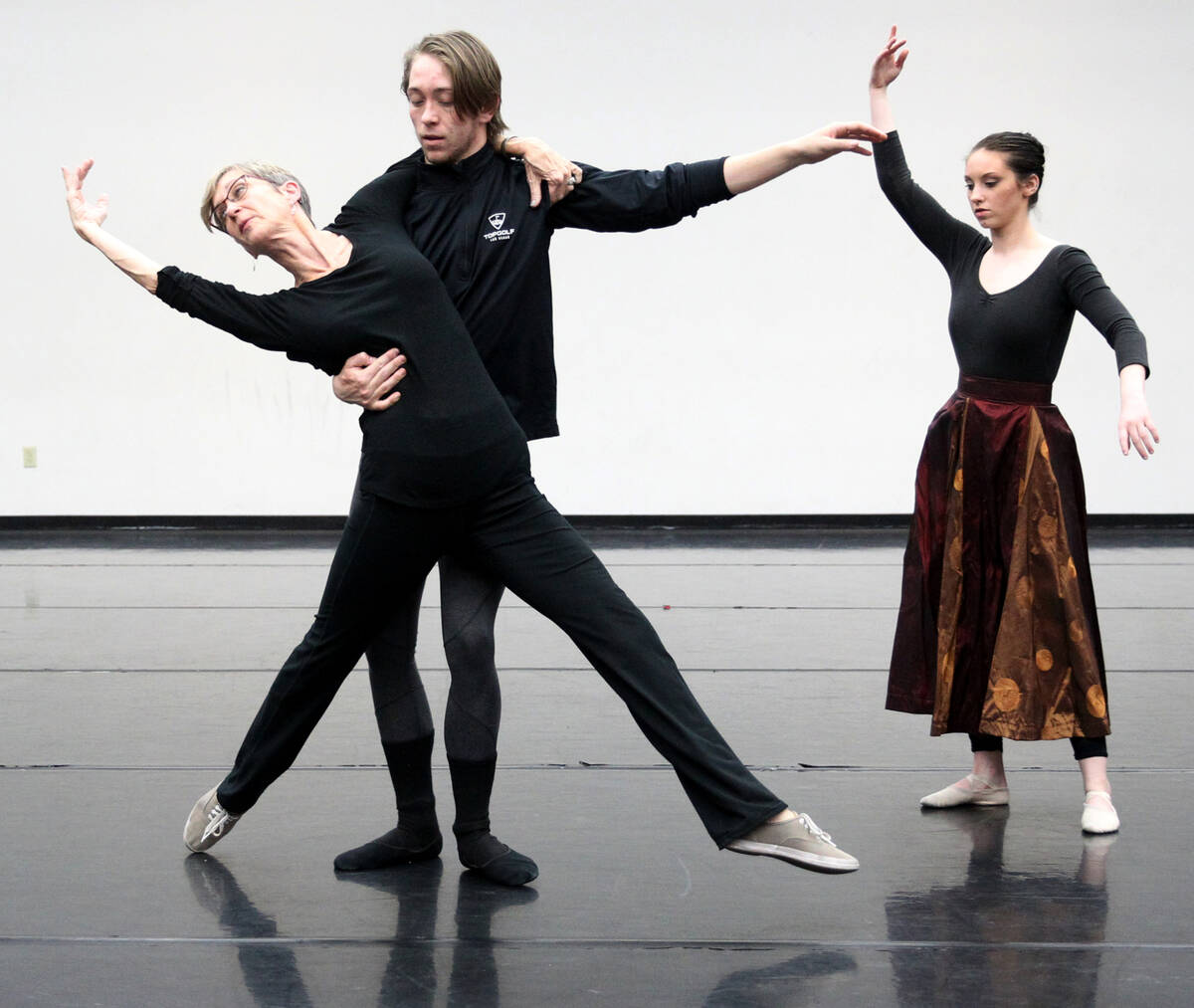 Not since Carmen Miranda performed in her fruited headdress at the New Frontier in 1955 have bananas caused such a stir in Vegas.

The zany minor-league Savannah Bananas are bringing their “Banana World Tour” to Las Vegas on May 19 at Las Vegas Ballpark. That’s usually home to the Las Vegas Aviators. But as GM Don Logan said, “Once they announced this, I’ve more calls about the Bananas than anything else over the past six months,” Logan said Friday. “I’ve been pounded, absolutely pounded, about the Bananas. They are a social-media phenomenon.”

As Logan noted, the Bananas have become famous on social media, drawing 3.5 million TikTok followers with their bright-yellow uniforms and infield choreography. A recent TikTok series showed the infielders dancing behind the pitcher as he winds and delivers against the Party Animals (dressed in black-and-pink uniforms).

One clip shows the team performing a Rockettes-style kick line. Another shows a number performed to “Blinding Lights” by The Weeknd, which fortuitously references Las Vegas.

The team has a Las Vegas connection (shocker). Their director of entertainment, Zack Frongillo, worked with the Vegas Golden Knights’ entertainment team prior to their inaugural 2017 season through 2021. You might recognize him, or not, as the villain dueling the Golden Golden Knight in the team’s pregame show.

But Frongillo is more than a staged combatant. He’s a serious student of dance, having performed in the “Carmina Burana” concert at the Smith Center with the Las Vegas Philharmonic, and also developed a dance piece at UNLV on the first anniversary of the Oct. 1 shootings.

Frongillo is also son of Clark County Regional Flood Control District Public Information Manager Michelle French, and a UNLV grad who was entertainment director for the school’s hockey club. Frongillo has has helped drive the Bananas’ entertainment vision. He’s even directed some choreography and helped select the better dancers during tryouts.

As Frongillo explains, the Bananas play a tweaked version of baseball, dubbed “Banana Ball,” enforcing a two-hour time limit on games. No bunting. Batters are not allowed to step out of the batter’s box. No mound visits allowed. Walks are called “sprints” (with the batter racing around the bases as the catcher tosses the ball to every position player). Foul balls caught by fans are counted as outs.

Games are on a two-hour time limit. If the score is tied, the tiebreaker is the pitcher facing a batter with a single position player in the field. Any fair ball is then a race between the hitter and fielder. The result is an out, or a run.

“We kind of started with a table read, I guess you could say, or table discussion about the team,” Frongillo said Wednesday during a phone chat. “Jesse and Berry sent out a question to our entire team, and asked, ‘What is boring about baseball? What if you were able to make some rule changes?’”

Frongillo said the team found, “The game is too long, it’s too slow, it’s too boring. These were the consistencies that that we saw.”

The original Bananas stepped in for the South Atlantic League’s Savannah Sand Gnats, who left for Columbia, S.C. in 2015. The Bananas have played in the Coastal Plain League from 2016-22. Using a team of college standouts, they won the CPL championship in 2016, ’21 and ’22.

That team has now evolved to the touring exhibition team, which features a few former minor-league prospects and college standouts. Ex-Major League journeyman Eric Byrnes is the team’s manager, usually clad in a banana-yellow, fur-style coat, regardless of the weather conditions. The team’s mascot, Split, is predictably a big hit with fans.

Former big-league pitcher Bill “Spaceman” Lee has been a Bananas regular, at age 75 this year. He plans to be back next year even after suffering a “cardiac episode” in the bullpen in August. Former major leaguers making guest appearances during the Bananas tour have been Jonny Gomes, Jake Peavy, Jonathan Papelbon and Josh Reddick. Hall of Fame catcher Johnny Bench was the team’s first-base coach in West Palm Beach, Florida, last spring.

An ESPN+ docu-series, titled “Bananaland”, was released in August. The series shows Jesse Cole and his wife, Emily, building a baseball sensation from a completely gutted minor-league ballpark. Grayson Stadium now sells out its 4,000 seats whenever the Bananas play. Unlike the pre-Banana Ball days, the crowd stays until the end, knowing the show ends in just two hours (or less).

The team is looking forward to bringing their act to Vegas. In a a story by the Savannah Morning News, Cole said of our town, “The entertainment capital of the world. Why wouldn’t the Bananas be playing there?”

The ever-grooving R&B act Soul of Motown at Westgate Cabaret is donating all of the ticket sales of their show Monday night to the purchase of the anti-overdose drug Narcan for first responders. The effort is a partnership with Westgate Las Vegas. Showtime is 5:30 p.m., go to ticketmaster.com for info.