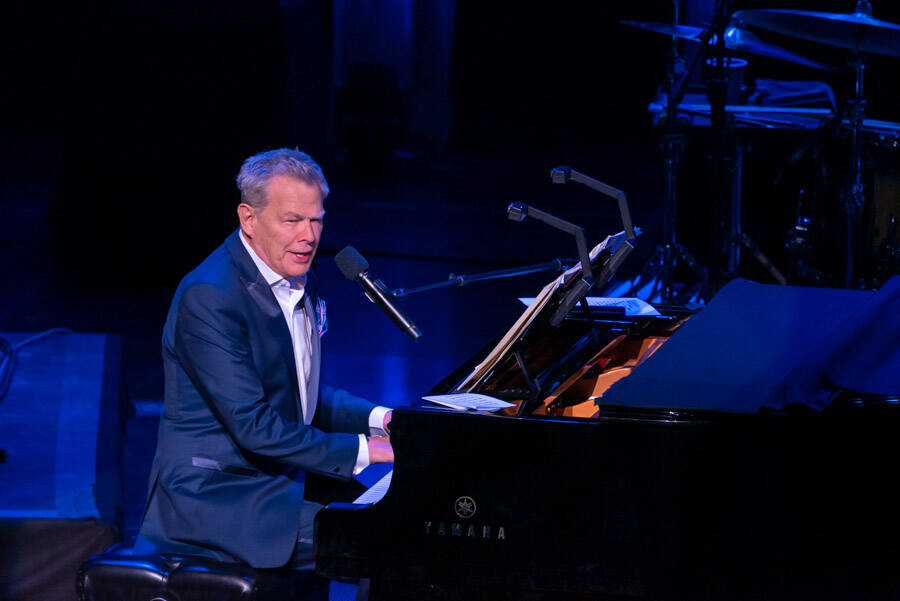 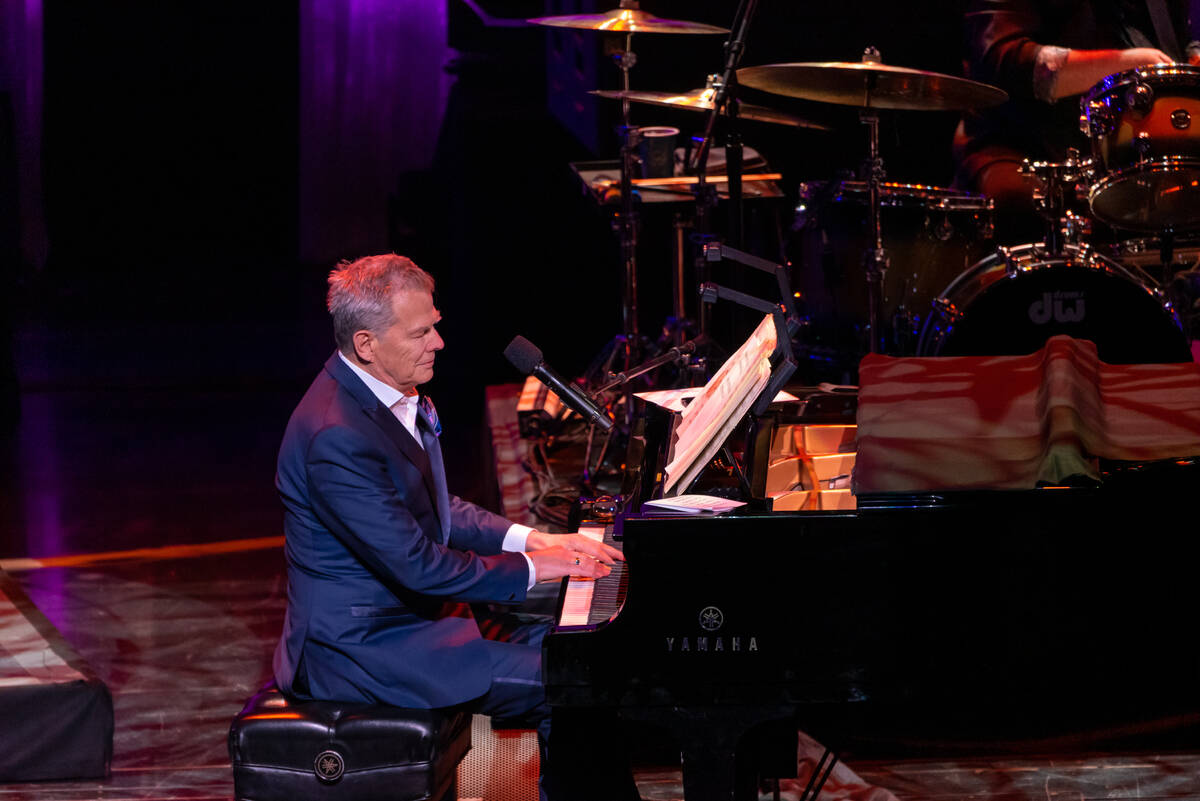 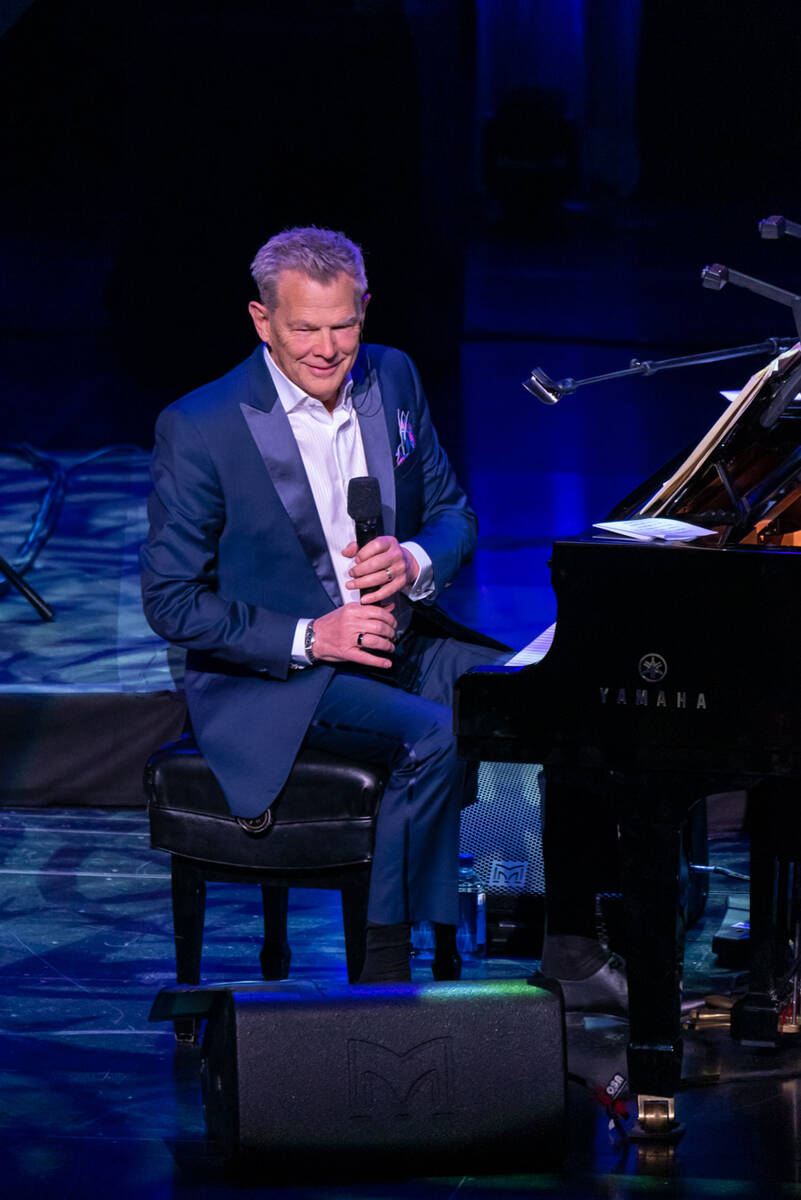 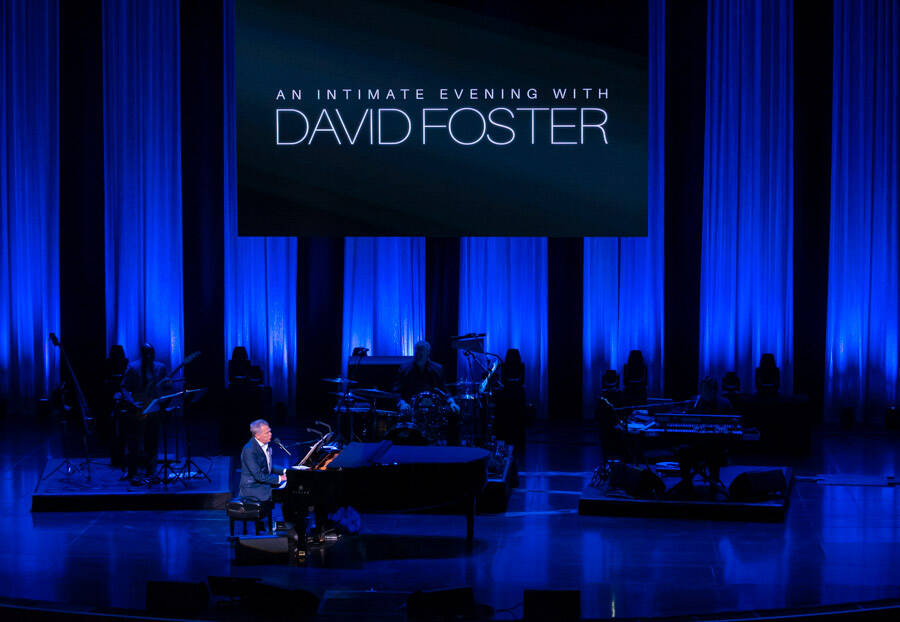 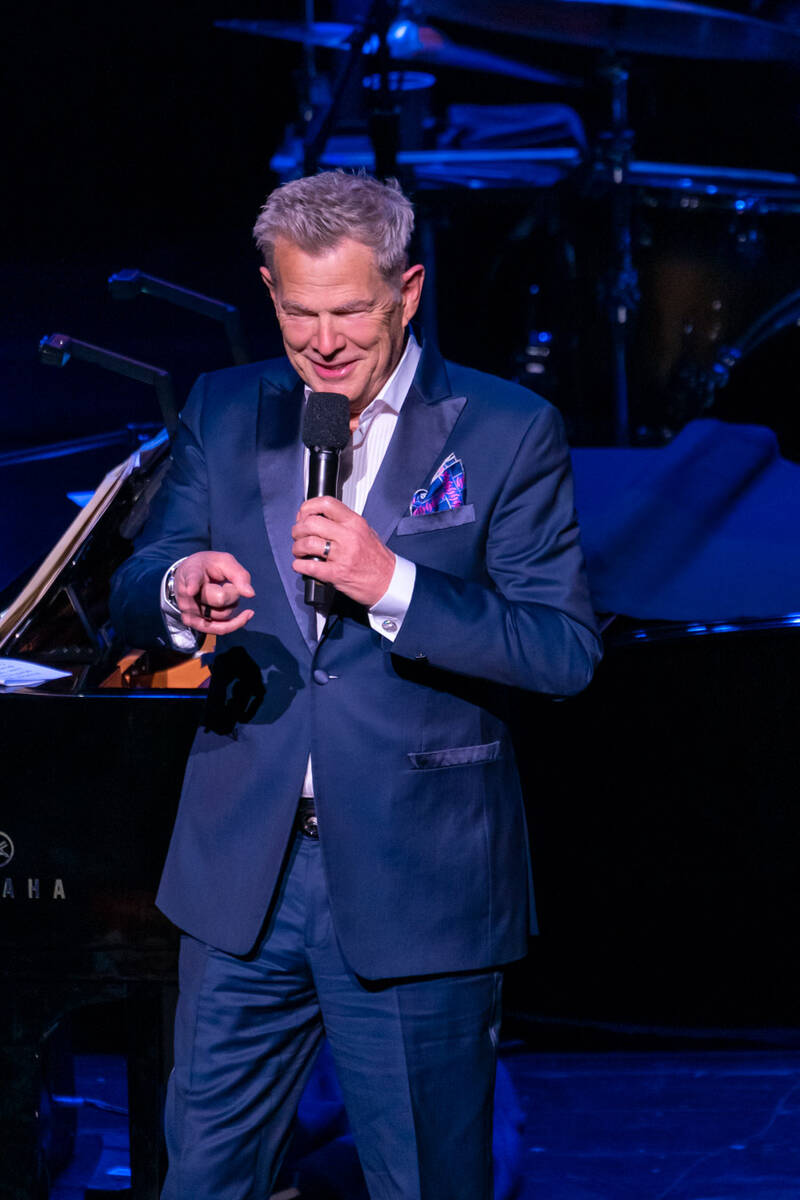 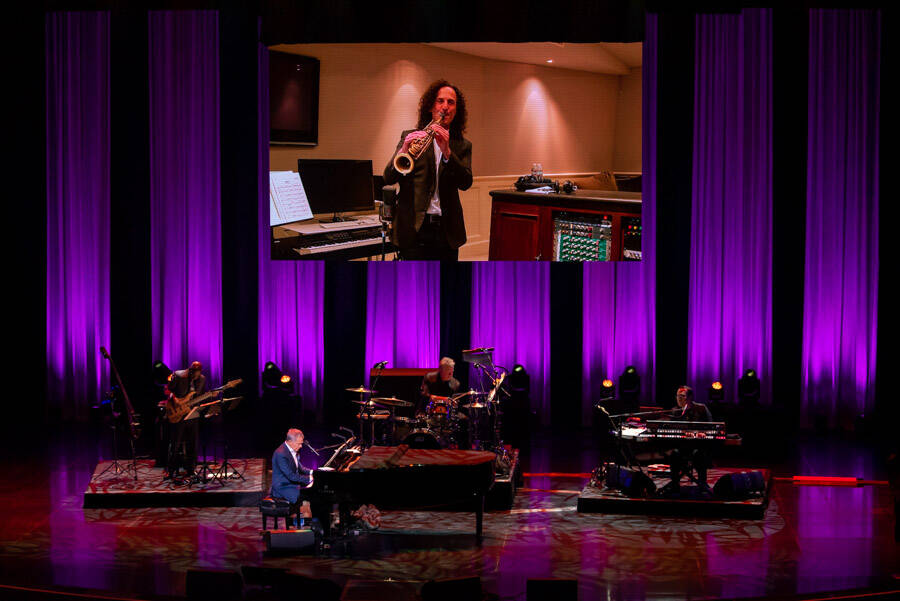 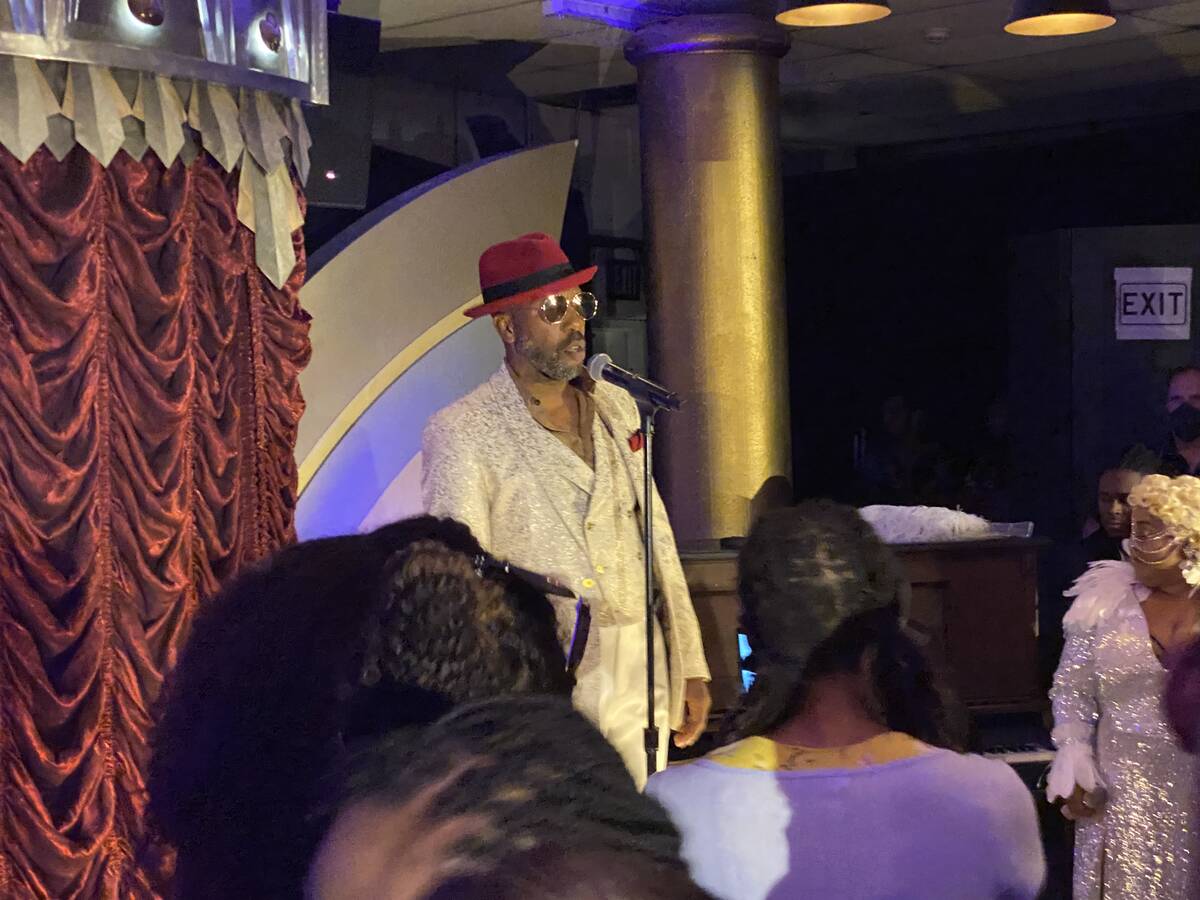 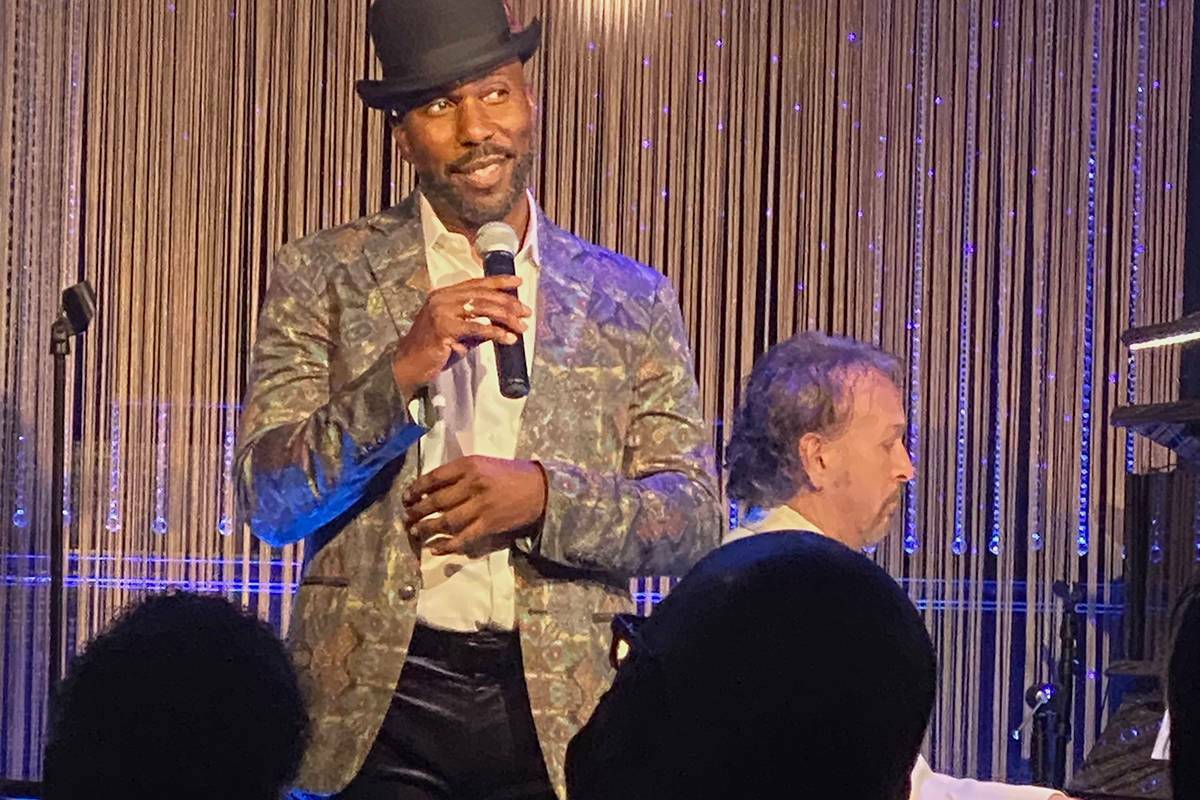 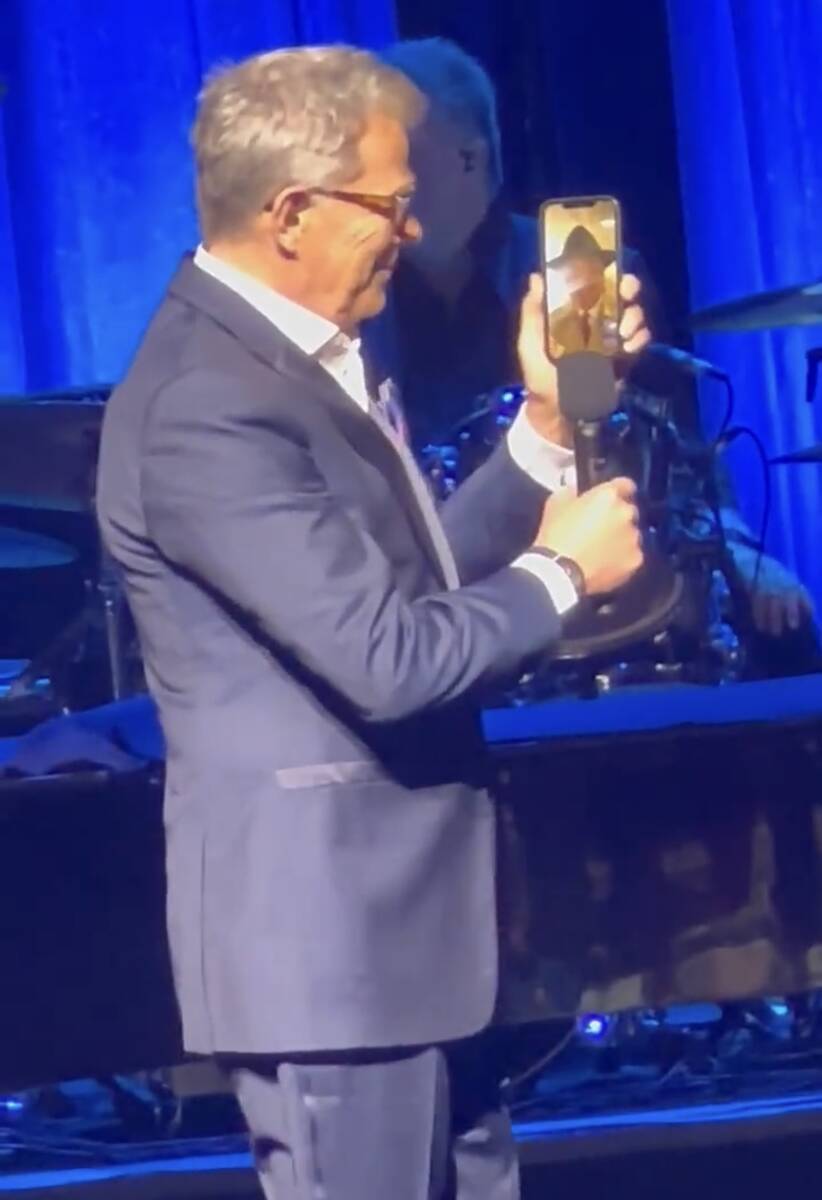 Michael Bublé opens at the Theatre at Resorts World Las Vegas in April. But before then, the Canadian crooner teased to the residency from a competing venue, the David Foster iPhone Showroom.

Bublé was an unbilled guest at Foster’s show Friday night at Encore Theater at Wynn Las Vegas. But the singer was not actually present. Foster summoned him live, on FaceTime, to introduce a Foster’s arrangement of “Fever,” a highlight of Bublé’s debut album.

Foster mentioned that Bublé was wearing a fedora for a music video from his upcoming album. Bublé’s next release is to be an homage to vintage Vegas, though he referred to a classic Hollywood figure when Foster called.

“I’m trying to be Humphrey Bogart,” Bublé said, “but my wife says I look like Inspector Gadget.”

With his mic placed at the bottom of his phone, connected to its speaker, Bublé began performing the song himself. Foster turned the phone to the video screen behind the stage, saying, “You know what that says? An Intimate Evening With David Foster, not Michael Bublé.”

Foster mentioned to Bublé that the show started 30 minutes late, for glitches in his bio video to open the performance.

“Have you ever had that happen to you, starting 30 minutes late?” Foster asked.

“Many times,” Bublé said. “COVID put me back two years.”

Bublé also said, “I wish I was with there with you!” Foster was unable to end the call, so placed Bublé-in-the-phone atop the piano. Sheléa, among Foster’s in-person guest stars, said of this setup, “Singing for Michael Bublé on the phone, no pressure.” I think we heard Bublé singing along, too.

McPhee, and a shout to Bennett

Foster’s wife and accomplished TV star and stage performer, Katharine McPhee, showed up, unbilled. The two joked about their appearance on Season 6 of “The Masked Singer,” Their disguise was Banana Split, with McPhee as the smiling ice cream and Foster the banana with hearts as eyes. McPhee looked up at the image and said, “We look kinda creepy.”

The couple was eliminated in the show’s Group B finale. Jewel, as the Queen of Hearts, won the title.

A funny stretch of “Someone Like You” by #Adele opens it. “”Nessus dorma” closes it. @officialdfoster w/ in billed guest @katharinemcphee & #KeithNelson on bass make it a night @WynnLasVegas #RJnow @reviewjournal pic.twitter.com/TG2xphMapK

McPhee tap-danced (well, in bare feet) to “Singing In The Rain,” and covered “Redneck Woman,” famous for McPhee’s performance of the song at a karaoke bar on the TV series “Smash.” McPhee is back for Foster’s next scheduled appearances at the Wynn, April 20 and 22-23.

McPhee later joined Fernando Varela and Andrea Bocelli, appearing on video feed, on a soaring rendition of “Nessun dorma.” Kenny G took the big screen for a take of “St. Elmo’s Fire” and Josh Groban added a for a virtual collaboration of “You Raise Me Up.”

Foster also featured the vocalist Pia Toscano (who, too, is a frequent duet partner of Bocelli). And Las Vegas Raiders fans recognized the man Foster calls, “My favorite bass player,” Keith Nelson. The master musician is a member of David Perrico and the Las Vegas Raiders House Band.

Midway through the show, Foster called out to a Vegas dignitary in the audience, Paragon Gaming co-founder and CEO Diana Bennett, celebrating her birthday along with her friend and famed restaurateur Elizabeth Blau.

Bennett is also daughter of the late hotel-casino pioneer William Bennett. The family owned Bennett’s family owned the Sahara before selling the casino to SBE Entertainment and Stockbridge Real Estate in 2006. Bennett’s father owned Circus Circus from 1974-‘94, and developed the company that would become Mandalay Resort Group.

Bennett co-founded Paragon Gaming with her longtime friend and business partner, Scott Menke, who died in October 2020 at age 55. Remembering one of Menke’s favorite Vegas restaurants, Bennett and Blau closed their night at Cipriani at Wynn Plaza.

Several sources and outlets are reporting the 60-member choir assembled for the Adele show, first mentioned in this space, had become a point of contention in the show’s rehearsals last week. Adele evidently wanted a toned-down opening, not the Bond-esque “Skyfall” number to open the show. The show had been mostly built in rehearsals in Fresno by the time she observed this particular number (the original reports that the stage was in Fresno was incorrect).

The singers for that number had been contracted by Las Vegas Mass Choir, which has toured internationally, has backed Foster at MGM Grand Garden, and has been the choir at House of Blues’ Gospel Brunch.

The original idea, again, was for 100 performers to sing, but only 60 auditioned and were hired, en masse, after a single run of the song. Reportedly, Adele had not seen a full run of the show until last week.

The choir was to be paid $100 a show, about half of what singers would be paid for the same amount of time in a comparable Strip production, with no compensation for parking at the hotel. That comparatively low rate for a superstar production led to an open argument on Facebook (a wonderful place to debate gig pay). The dustup centered on whether the singers were settling for substandard pay.

It’s now the mootest of points. As it turned out, nobody is getting paid, and at least one singer was fired for commenting on Facebook. That’s because everyone within sniffing distance of this production has signed NDAs.

Oh, and “Skyfall” might never be returned to the Adele show. There’s that, too.

Among the provisions planned for “Weekends With Adele” was a seat-filler system, ensuring the Colosseum would be totally full for her shows. Individuals would be assigned to take the spots of no-shows, or late-arriving audience members. This is among the details not fully realized during the run-up to the show, but such seat-filler programs are typically used for such televised awards shows as the Oscars, Grammys and Tonys (or what we call the Kramer Effect, for you “Seinfeld” fans).

Wynn’s swanky supper-club Delilah has expanded to nightly service, effective near the end of December. Seatings start at 5:30 p.m. John Terzian, co-founder of venue operating partner h.wood Group, says February will be brimming with surprises. As we say, it’ll be TerzTastic.

Longtime column fave Eric Jordan Young is leaving Las Vegas. He is now teaching theater at Long Island University, effective Jan. 17. EJY says this is not to be a permanent move, as he’s signed a one-year contract with the school. It’s not an easy decision for the master showman who dates to the days in town date “Starlight Express” at Las Vegas Vegas Hilton in the early 1990s.

Young has also co-starred in “Vegas! The Show,” at Miracle Mile Shops at Planet Hollywood, “Rock of Ages” at the Rio, “The Cocktail Cabaret” at Caesars Palace, Usher’s “Backstory Pass” at Caesars Palace, and was a director in “Baz!” in its days at Palazzo Theater. One year, he says. We’ll hold him to it.

Mondays Dark is back with a flourish at 8 p.m. Friday at the Space. “#WeFreedBritney,” featuring the music of you-know-who, is a benefit of Jeff Civillico’s Win-Win Entertainment operation. Katie Murdock, Katie Marie Jones, Christina Shaw and Kitty Del Mar are among the Britney Spears performers performing. Noted Spears zealout Kenny Davidsen leads the band. Party Deck seats still available at $20 a pop. Info at MondaysDark.com.