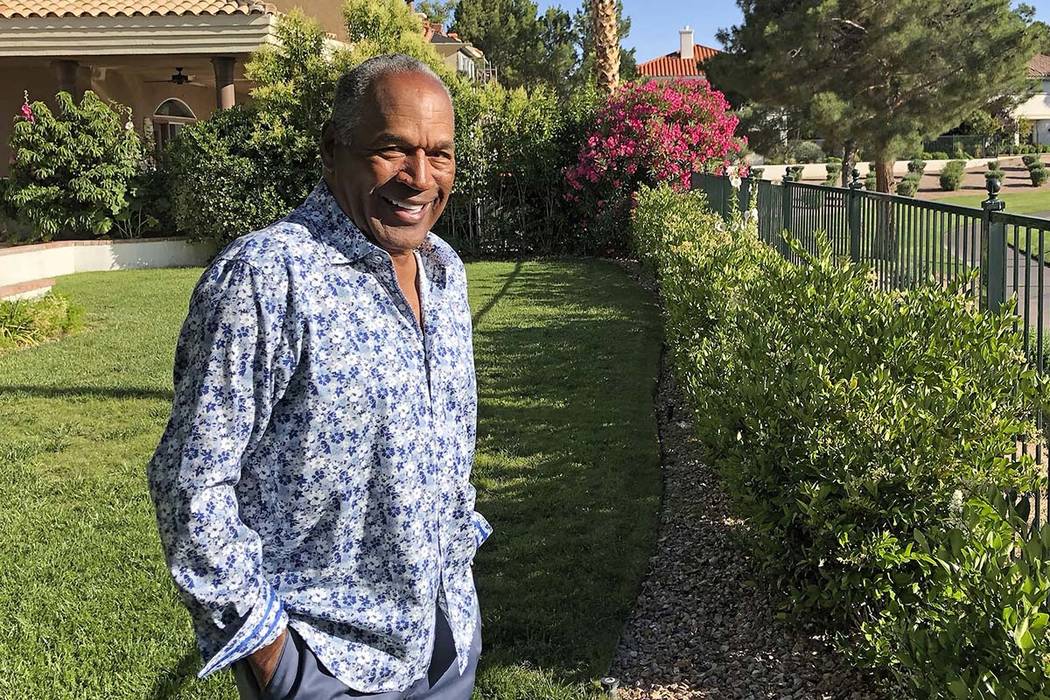 This photo provided by Didier J. Fabien shows O.J. Simpson in the garden of his Las Vegas area home on Monday, June 3, 2019. After 25 years living under the shadow of one of the nation’s most notorious murder cases, Simpson says his life now is fine. (Didier J. Fabien via AP)

The ex-NFL star, ex-convict and current Las Vegas resident made the announcement with a 22-second video posted @TheRealOJ just before 9 p.m. Friday.

“Hey Twitter world, this is yours truly, coming soon to Twitter, you’ll get to read my thoughts and opinions on just about everything,” Simpson said in selfie clip. “Now, there’s a lot of fake O.J. accounts out there, so this one, @TheRealOJ32, is the only official one. This should be a lot of fun. I’ve got a little getting even to do. God bless, and take care.”

Simpson is shown with a golf course in the background; he’s been reportedly residing at a home in Red Rock Country Club since October 2017 after his release from prison in Lovelock after serving a nine-year sentence for his robbery-kidnapping conviction in Las Vegas.

Simpson is doubtless to be a force on the social-media platform. His original video amassed nearly 3 million views and he garnered more than 145,000 followers in just 12 hours. Responses flooded in, too, with one poster writing, “Me leaving Twitter when I hear OJ Say he’s got some “getting even to do” with a GIF of the infamous white Ford Bronco chase in L.A. in June 1994.

Another posted, “I hope that you are making some progress in identifying the real killers.”

In an Associated Press story last week, Simpson said of his time in Vegas, “The town has been good to me. Everybody I meet seems to be apologizing for what happened to me here.” The story was published on the 25th anniversary of the murders of Simpson’s ex-wife Nicole Brown Simpson and her friend Ronald Goldman.