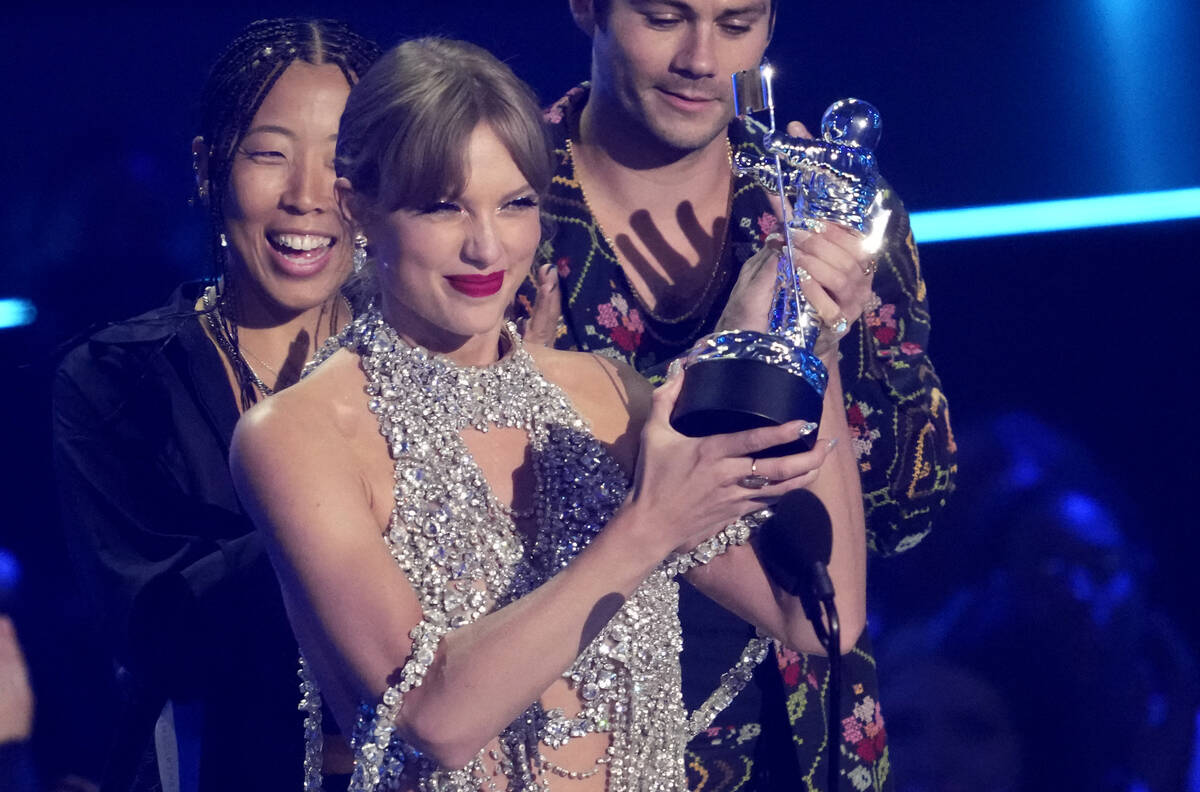 Taylor Swift accepts the award for best longform video for "All Too Well (10 Minute Version) (Taylor's Version)" at the MTV Video Music Awards at the Prudential Center on Sunday, Aug. 28, 2022, in Newark, N.J. (Photo by Charles Sykes/Invision/AP) 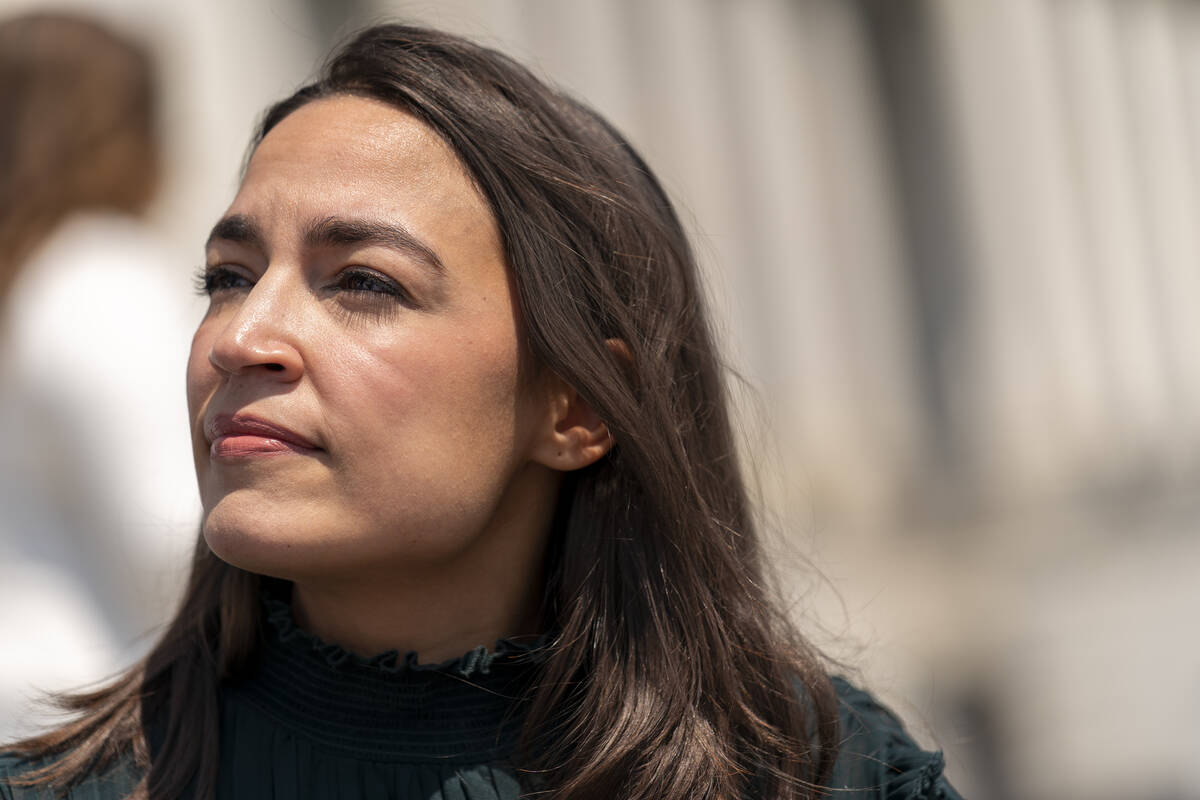 FILE - Rep. Alexandria Ocasio-Cortez, D-N.Y., joins female House Democrats at an event ahead of a House vote on the Women's Health Protection Act and the Ensuring Women's Right to Reproductive Freedom Act at the Capitol in Washington, July 15, 2022. Four years after Ocasio-Cortez won a New York congressional primary that toppled a powerful incumbent and sent a jolt through the Democratic Party, the progressive left has had mixed success, with some questioning the limits of the movement’s power. (AP Photo/Andrew Harnik, File)

The Kats! Bureau at this writing is Circa sports book. We are programmed to feel the emotion. Co-owner Derek Stevens has money riding on multiple outcomes. He’s also in a fantastic, salmon-colored suit.

We’re interested in the dual Raiders-Seahawks and 49ers-Saints games. We’re a longtime 49er fan,dating to the Steve DeBerg-Cedrick Hardman-Paul Hofer era. We are also new to the Raiders camp, because of their regional appeal. I need to consult a counselor about how to resolve rooting for the Raiders, while being a 49er Faithful. The counselor might be named Dr. Davis.

The Ticketmaster-Live Nation merger issue is escalating to Capitol Hill.

Rep. Alexandria Ocasio-Cortez D-N.Y. says interest in Taylor Swift among some of her staffers helped draw her into the Ticketmaster-Swift saga.

Rolling Stone published a lengthy interview with Ocasio-Cortez on Tuesday. The 33-year-old lawmaker says she heard the unfiltered complaints from her own team.

“I was watching what was going on with the pre-release of Taylor Swift’s tickets. It came up on a more personal level; I actually have quite a few staff who were trying to get tickets that day,’ Ocasio-Cortez told the magazine. “Between seeing their experience and seeing all the people online talking about it, I think it really showed how widespread the problem is and reflects the degree of market consolidation in this industry.”

Ocasio-Cortez has been an early critic of the Live Nation-Ticketmaster merger, in the face of the Swift episode. Tickets for “The Eras” tour were not offered to public sale as Ticketmaster dealt with upwards of 14 million ticket request in its Verified Fan Presale period. The lawmaker says she wants the companies’ 2010 merger “unwound.”

“Our concerns here can affect everyone. It could affect the artists from being able to conduct the shows the way they want, from promotions to the way that tickets are sold and structured. And it affects fans because they are being absolutely fleeced,” she said. “You’re paying way more than just the base ticket price of going to the show, but additionally, what we’re seeing on top of that is the absolute explosion in the resale market.”

Ticketmaster and Live Nation will be heard from, of course. They didn’t become industry heavyweights by ignoring politicians’ calls to split their partnership. This is going to be a high-stakes debate.

We’ve touched on plans for Coop’s Cabaret and Hot Spot. This headed up by Vegas hospitality figure Chris Cooper with plans to take over the former Nevada Room at the Commercial Center. The supper club’s opening has been moved back to January for daytime brunch shows. The extended strategy is to secure a liquor license by the end of March.

But this project is kinked up like an old garden hose. Bobby Watson, the veteran venue contractor who has been an integral figure in the club’s relaunch, left the team Monday and announced his departure Saturday. Entertainment director and stage manager Julian Miranda, who is also a topnotch singer, is also out.

An indication of how the club is progressing is Vegas jazz great Michelle Johnson’s response to Watson’s post about leaving: “What??”

This is pertinent, as Johnson, regarded as Las Vegas’s First Lady of Jazz, is supposed to open Coop’s Cabaret in January.

The club’s remaining officials are now shuffling their executive lineup about six weeks before premiering a new, multipurpose entertainment complex. This is not an ideal way for a new venue to maximize viability.

We’re also hearing distressing reports of substandard conditions inside the club. We need to be convinced of the club’s structural integrity, scheduling integrity, and integrity generally, before throwing our support behind this project.

Edie of “Faaabulous! The Show” and Sean McAllister of Vegas Revealed are back as co-hosts of Golden Rainbow’s 34th annual Ribbon of Life “Holiday Spectacular” Sunday at the Tropicana. This is the first holiday spectacular ever for the variety show. Previously, it’s just been “spectacular.”

An array of Vegas stage performers have signed on, led by Anne Martinez of “Bat Out of Hell — The Musical” and “RuPaul’s Drag Race’s” Elliott with 2 T’s, among others.

The most recent Ribbon of Life show raised $75,000, which went toward services for those living with or affected by HIV in Southern Nevada. Tickets start at $45, available at goldenrainbow.org/ribbonoflife. Guests of all ages are welcome.

The leathery, rocking adult revue Little Miss Nasty is performing at The Portal at Area15 from January through May, and “almost certainly” through the end of next year, as producer Marc Jordan says.

The dance show fronted by recording artist Gina Katon plays Jan. 21, Feb. 11, March 11 and May 12. The show sold out the 320-capacity room this month. We met this crew at the former Hooters’ Night Owl Showroom. Loud. Physical. Fun.

Longtime Vegas surf-rockers Thee Swank Bastards play 9 p.m. Monday, and every Monday, at The Golden Tiki. No cover, ages 21-over, pack the fez.