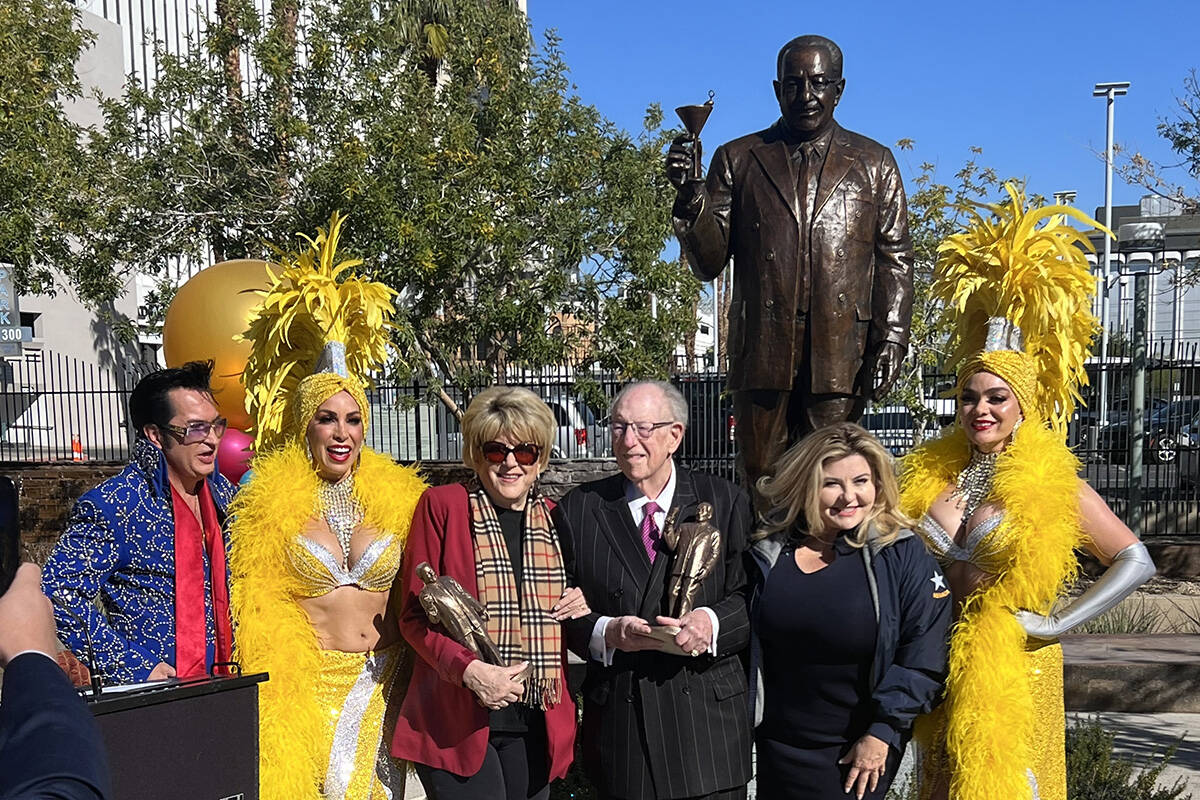 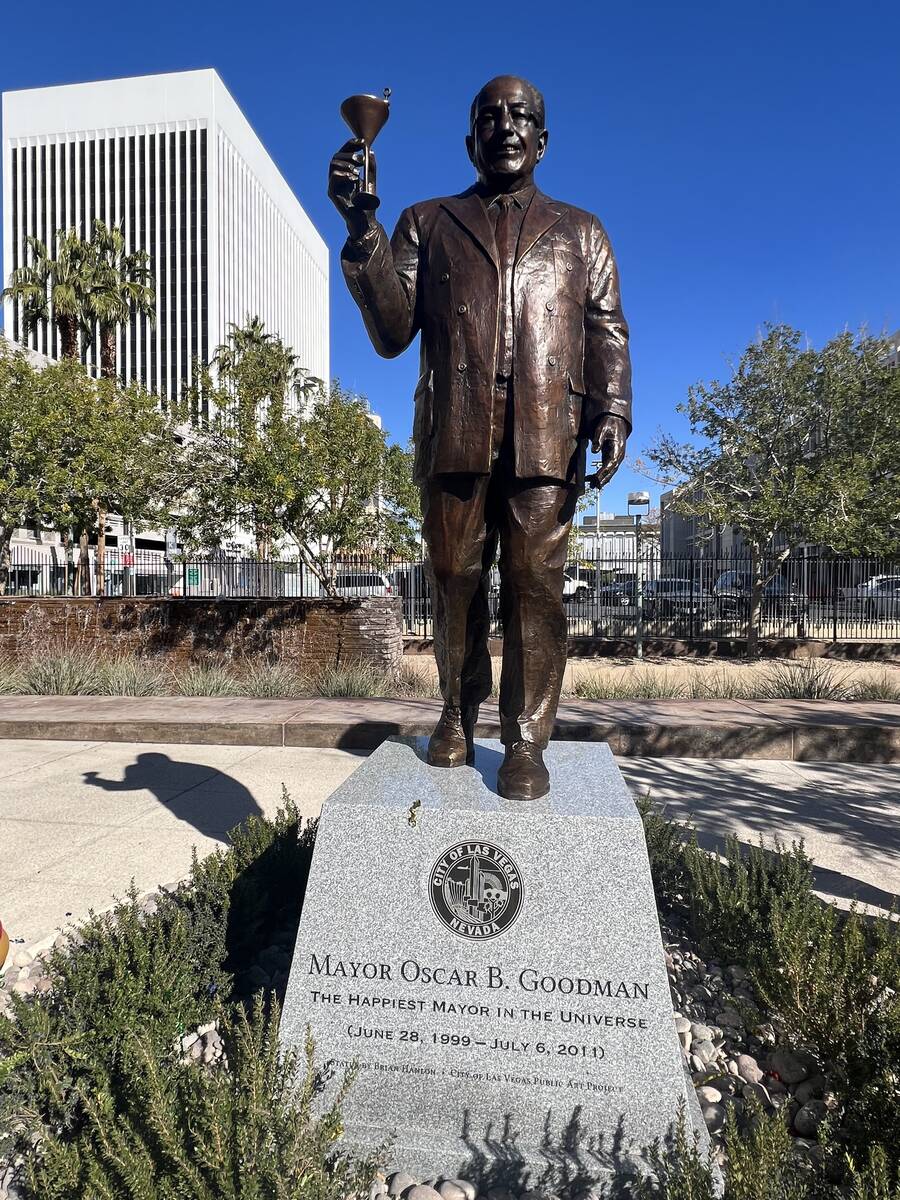 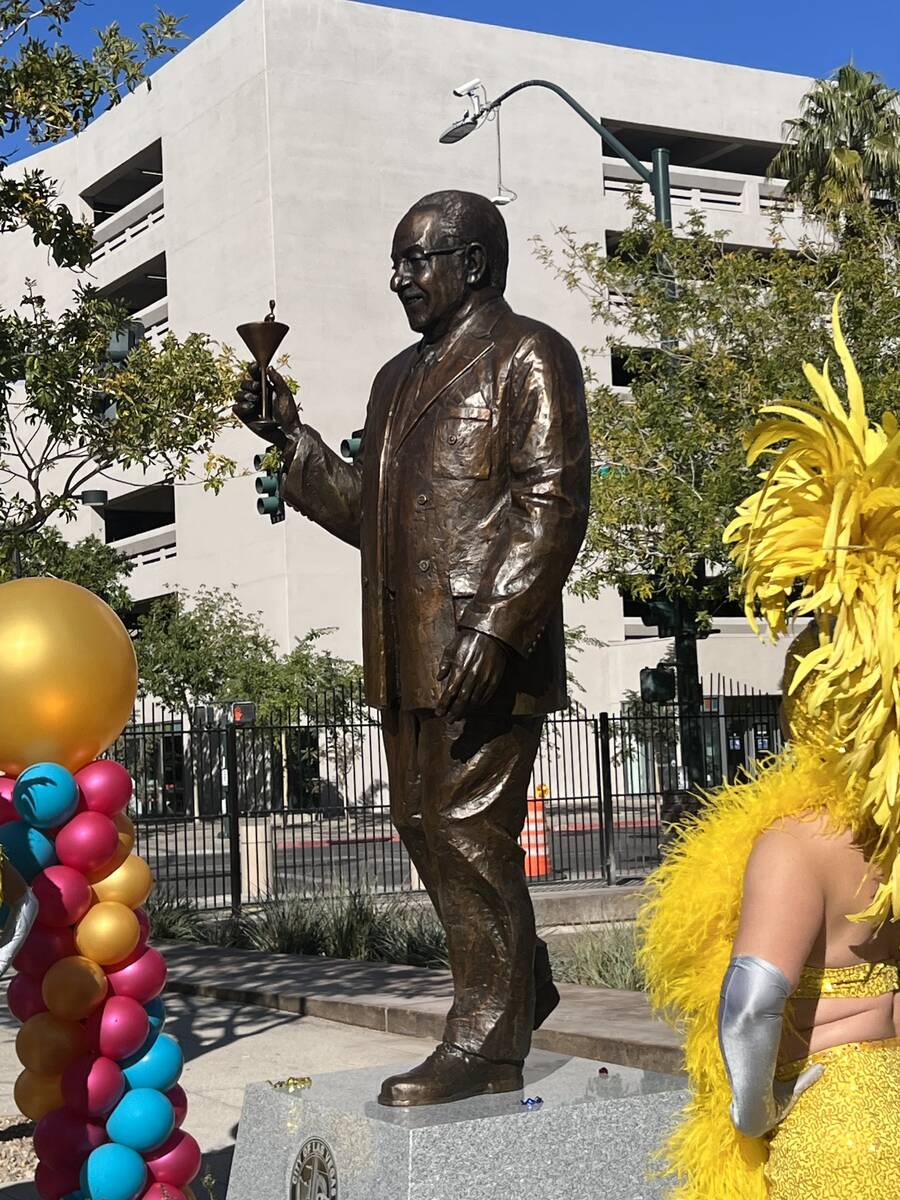 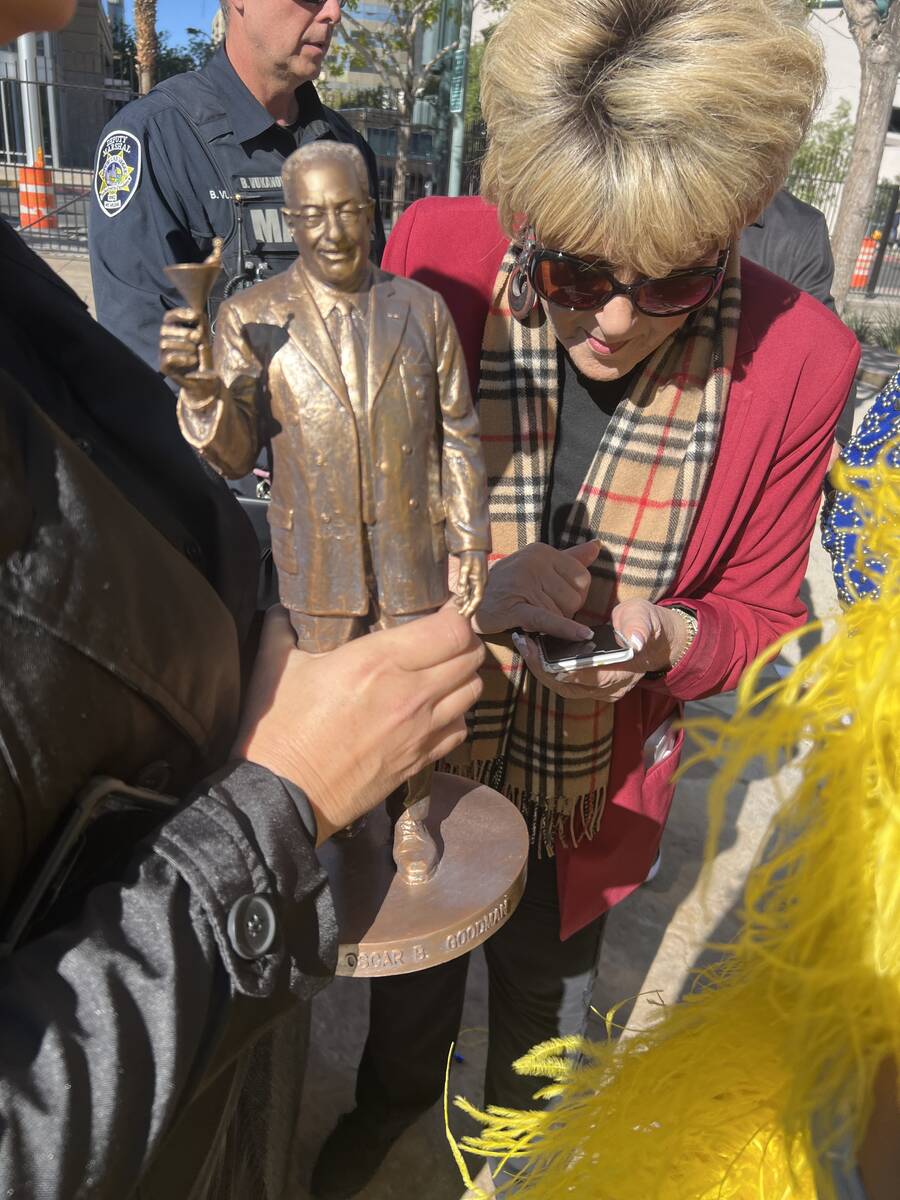 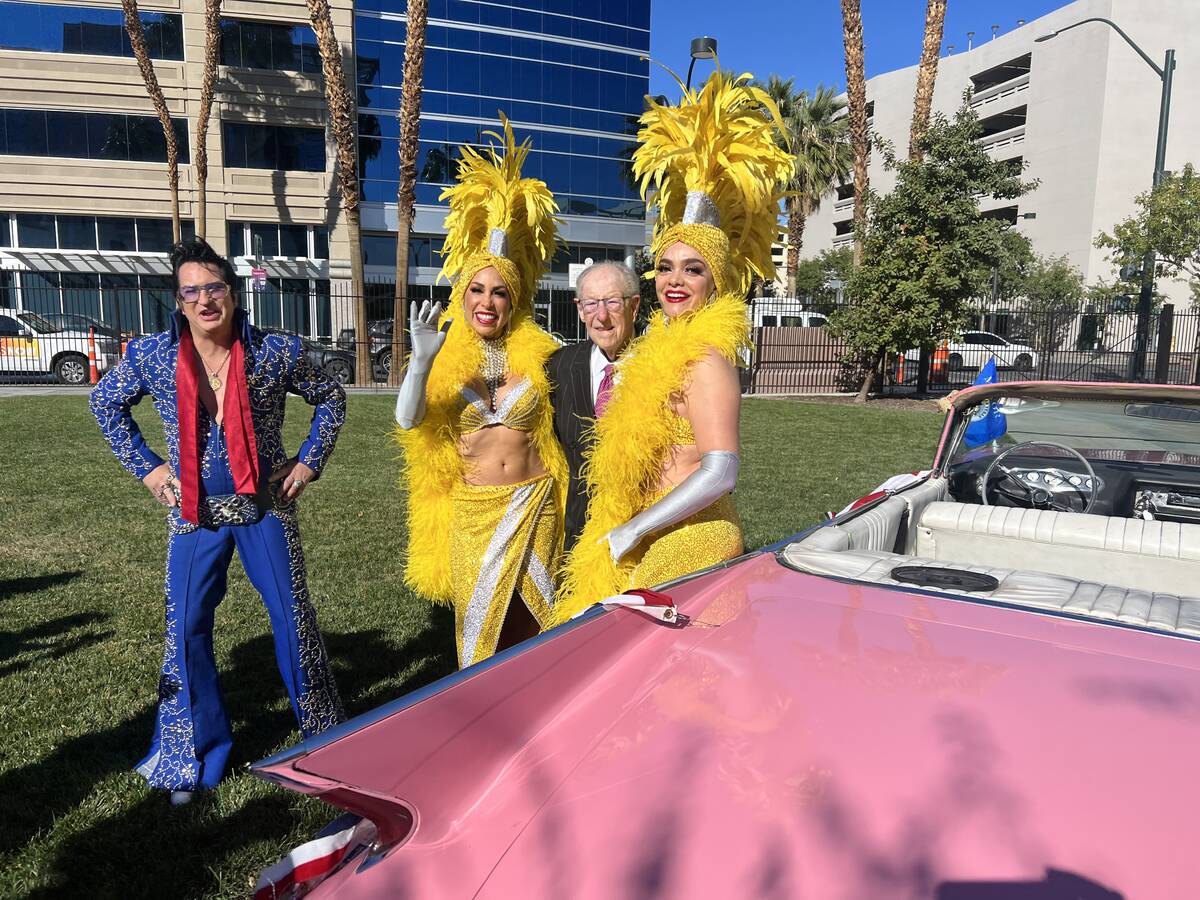 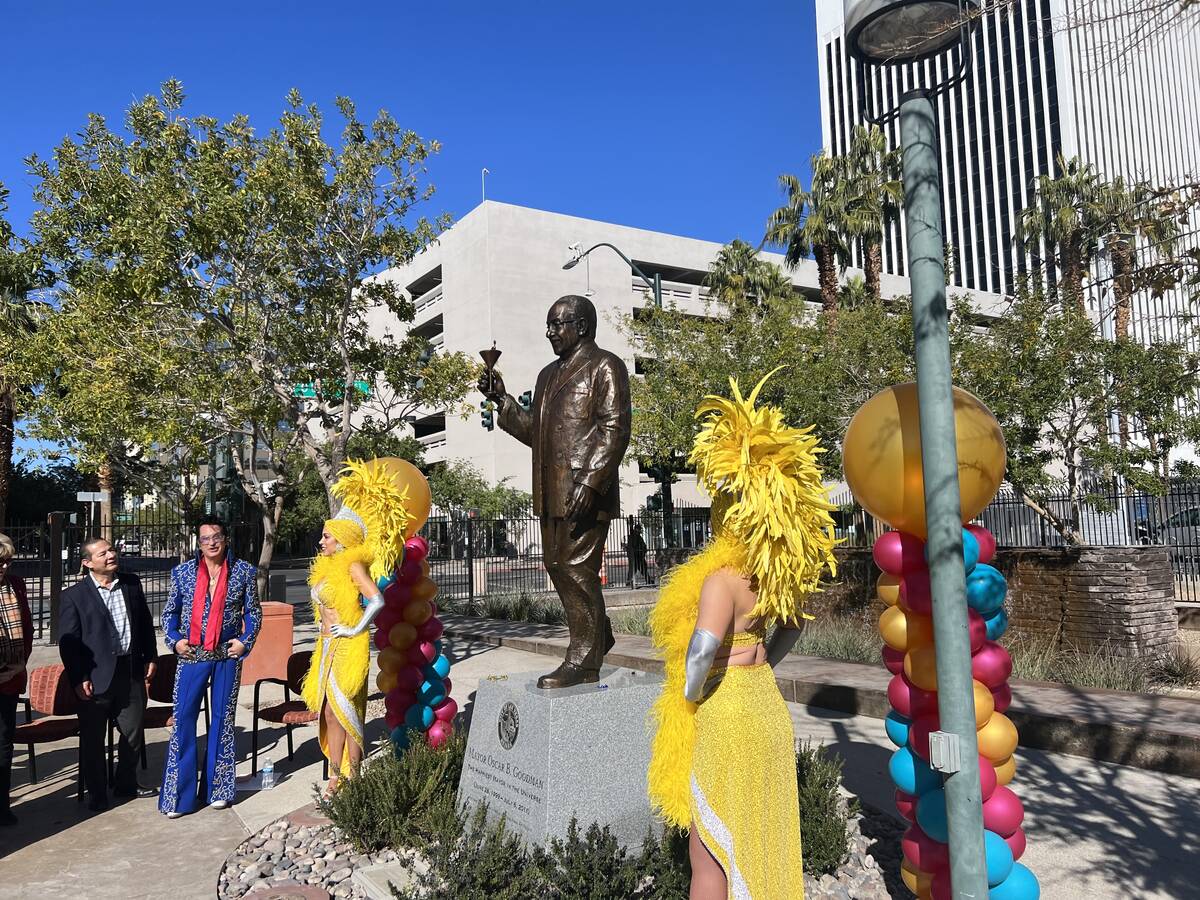 Oscar Goodman has now been bronzed, twice over.

A second statue of the former Las Vegas mayor has been unveiled in downtown Las Vegas, this one at Historic Fifth Street School at 401 S. Fourth St.

The figure is a suited and grinning Goodman, holding a martini atop a tall granite stand.

Conceived and created by artist Brian Hanlon — who also developed the “Good Counsel” statue of Goodman and his notorious client Tony Spilotro at Oscar’s Steakhouse at the Plaza — he also created the Jerry Tarkanian statue at Thomas & Mack Center, and the President Barack Obama figure at Historic Westside Legacy Park.

“Everybody here is, and I hate to say it, happy for me,” Goodman said after the ceremony. “That is very rare in politics.”

Goodman arrived at Tuesday’s event with characteristic nonchalance. He and Mayor Carolyn Goodman rumbled to the presentation while riding in the back of the familiar pink 1955 Cadillac convertible driven by Elvis impressionist Jesse Garon.

Showgirls Porsha Revesz and Jennifer Gagliano were again summoned to add vintage-Vegas panache to the event. Remarkably, those two have accompanied Goodman on such events for about 20 years.

Outgoing Las Vegas Councilwoman Michele Fiore came up with the idea of presenting the statue downtown. She funded the $125,000 piece through her the discretionary fund that all council members direct for public projects.

“We figured it out,” Fiore said when asked of her involvement. Goodman has befriended the oft-controversial elected official, a frequent guest at his Dinner Series talks at Oscar’s Steakhouse. (Since the statue unveiling, it has been reported Fiore lashed out at former Republican Party chair Amy Tarkanian at a Republican Party event Tuesday night at Stoney’s Rockin’ Country.)

Hanlon’s cast-bronze piece and solid-granite base weighs about 8,000 pounds (the base itself weighs about 6,500 pounds). Hanlon said it took a year to complete. He’s also working on an installation to honor Oct. 1 victims and their families on the former Las Vegas Village site on the Strip.

The artist compared this work with his Tarkanian statue at the T&M, and also the “Good Counsel” statue.

“If you look at Jerry and this, they have a very similar feel to them,” Hanlon said. “It’s two guys who really love their job. The Spilotro and Goodman piece is not that. It’s more tense, like he’s literally leaning over this man and saying, ‘You need to change your freakin’ life,’ and of course I like to depict the moment we remember them, that is the responsibility of the sculptor.”

Mayor Carolyn Goodman said the piece wasn’t quite finished. She asked for a chair to be placed in front of the statue, “So he can come here, sit for hours, and love self.”

In a more serious stream of consciousness, Goodman said he was very happy to have the statue placed at Fifth Street School. The downtown site is where the first two projects the city embarked upon were accomplished during Goodman’s time in office. One was the Oscar’s River water installation. The other was the renovation of the school itself.

“Fifth Street School, I wanted to be an intellectual marketplace, and it has certainly accomplished that desire,” Goodman said at the podium. “When we started, it was a sheriff’s substation, and nothing was happening. There was rubble there,” he said, gesturing toward the spot where his statue now stands.

Goodman said the redevelopment of downtown Las Vegas could, and should, continue after Carolyn Goodman is termed out in two years. The Goodmans will have served as mayors of Las Vegas for a quarter-century by the time she steps down.

“This is just the beginning, not the end,” Goodman said. “Carolyn’s successor will be able to do the same thing, if they are committed to making sure the same dream is reached by them, and those who work for them.”