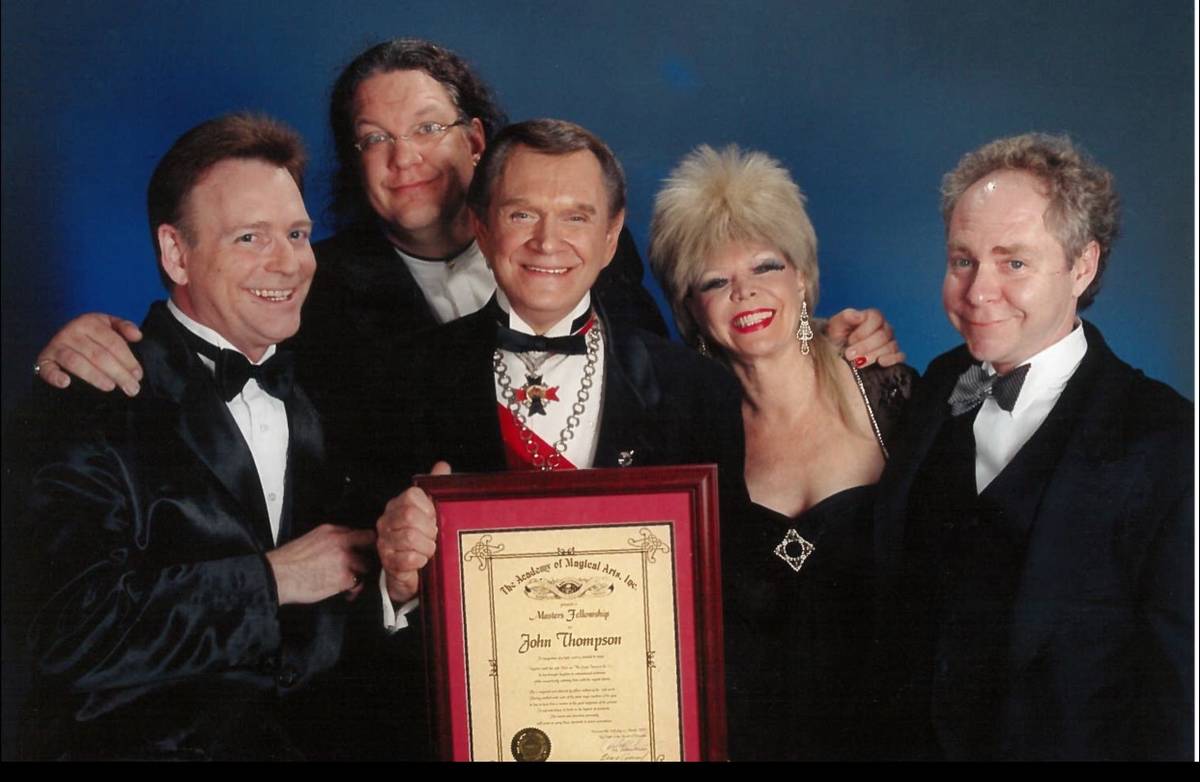 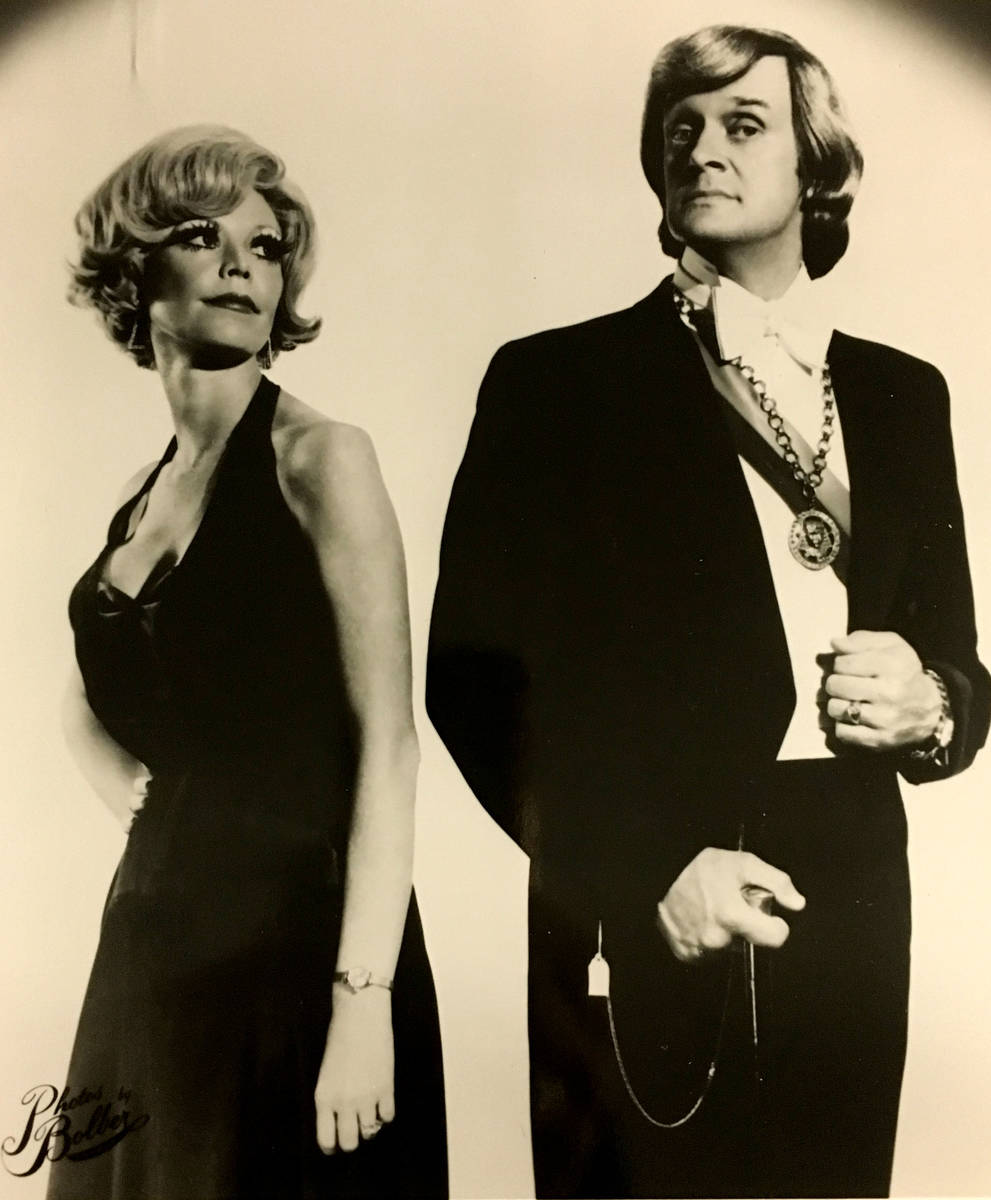 This 1985 file photo shows Johnny Thompson. It was a promotion photo for " Stars of Magic Concert For Hunger In Africa" Tropicana Hotel, Las Vegas. (The Great Tomsoni & Co.) 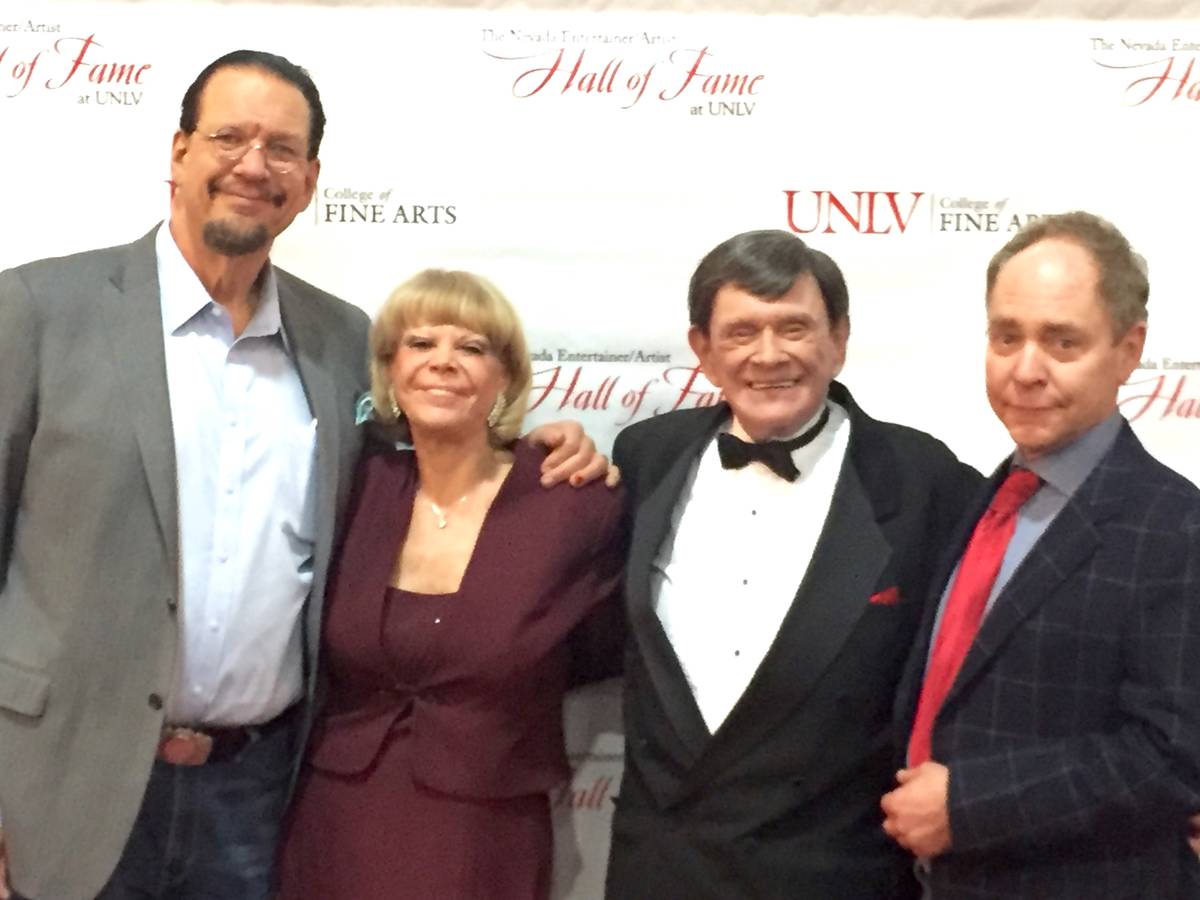 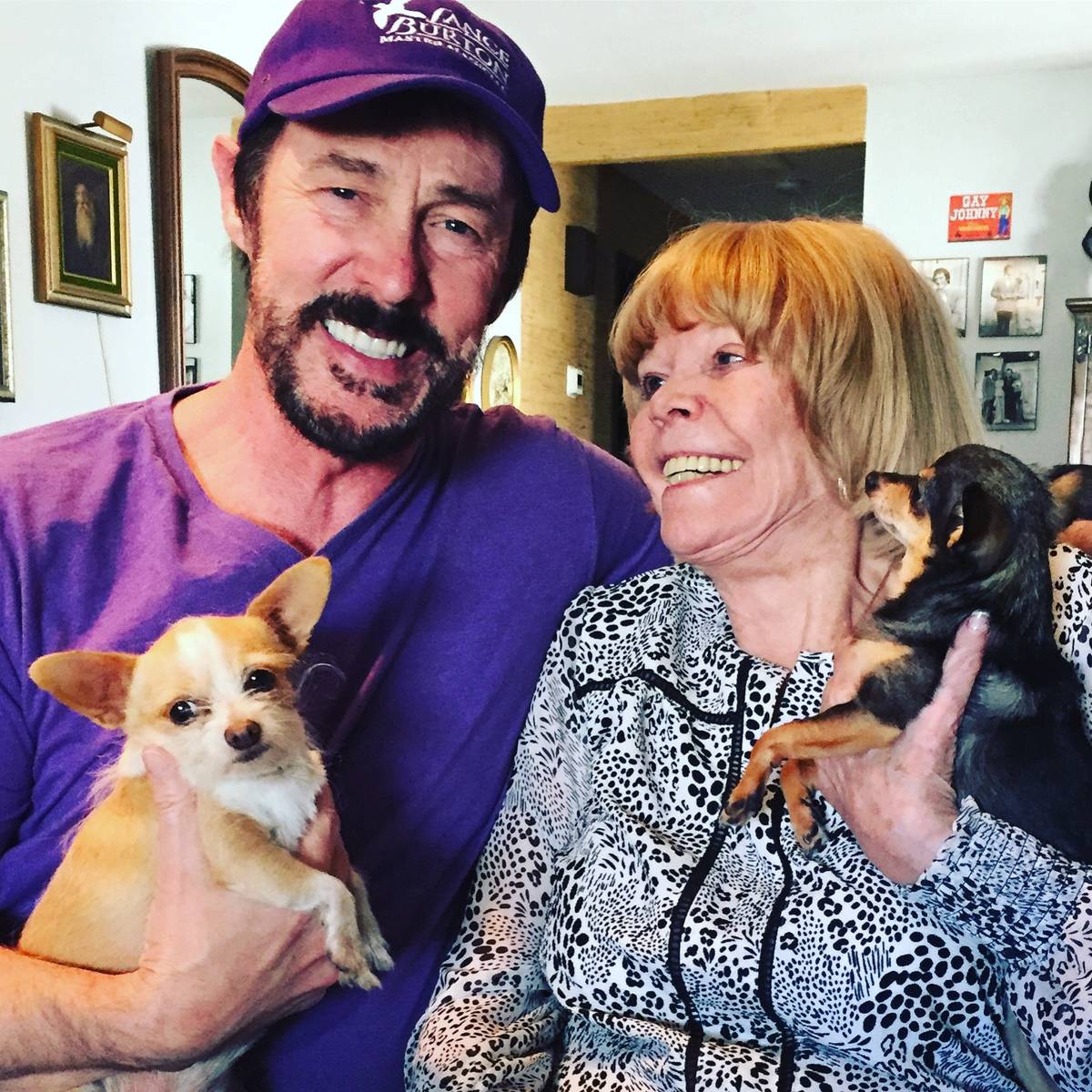 Lance Burton and Pam Thompson are shown with the chihuahuas Molly and Georgie in this photo from September 2020. (Lance Burton) 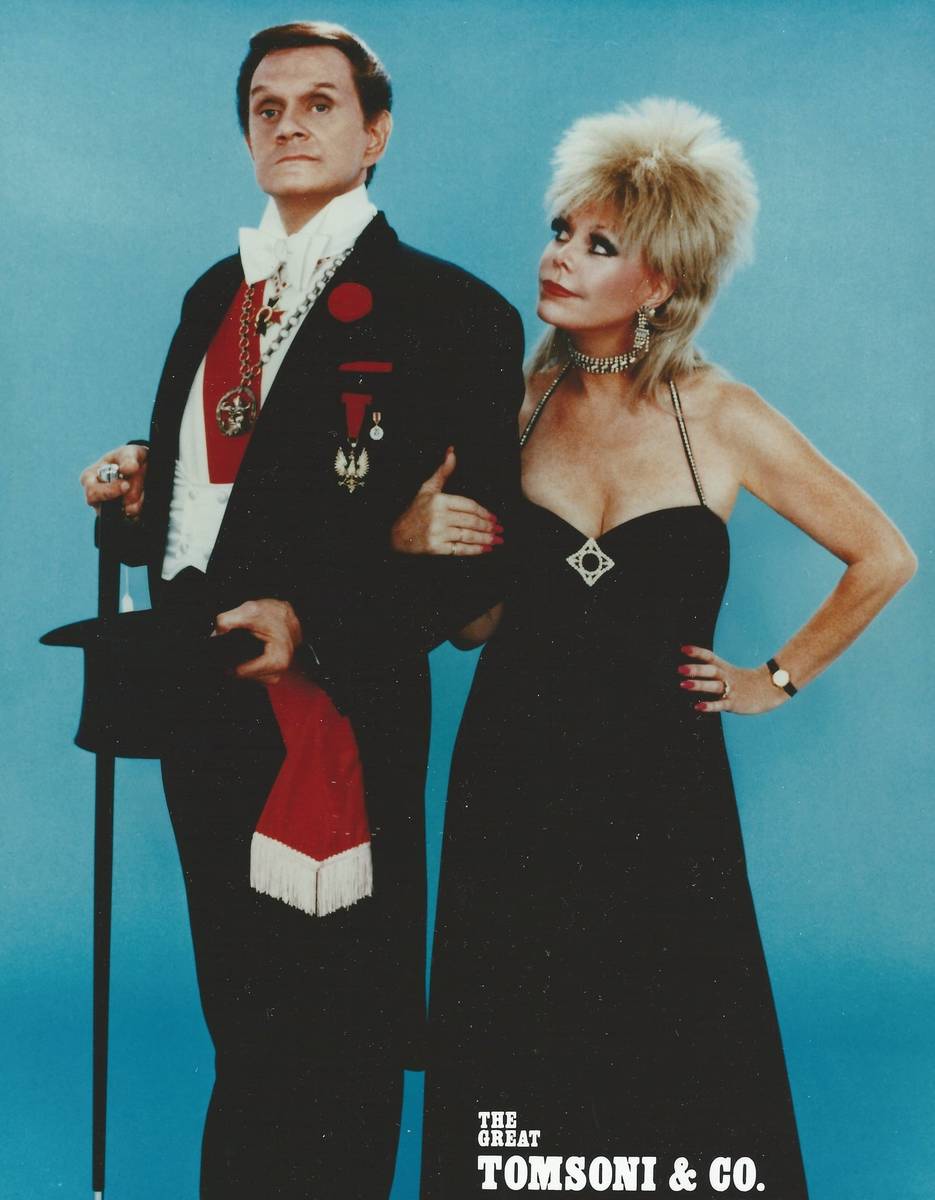 Johnny Thompson and Pam Thompson are shown in a promotional photo from the 1970s. (Lance Burton) 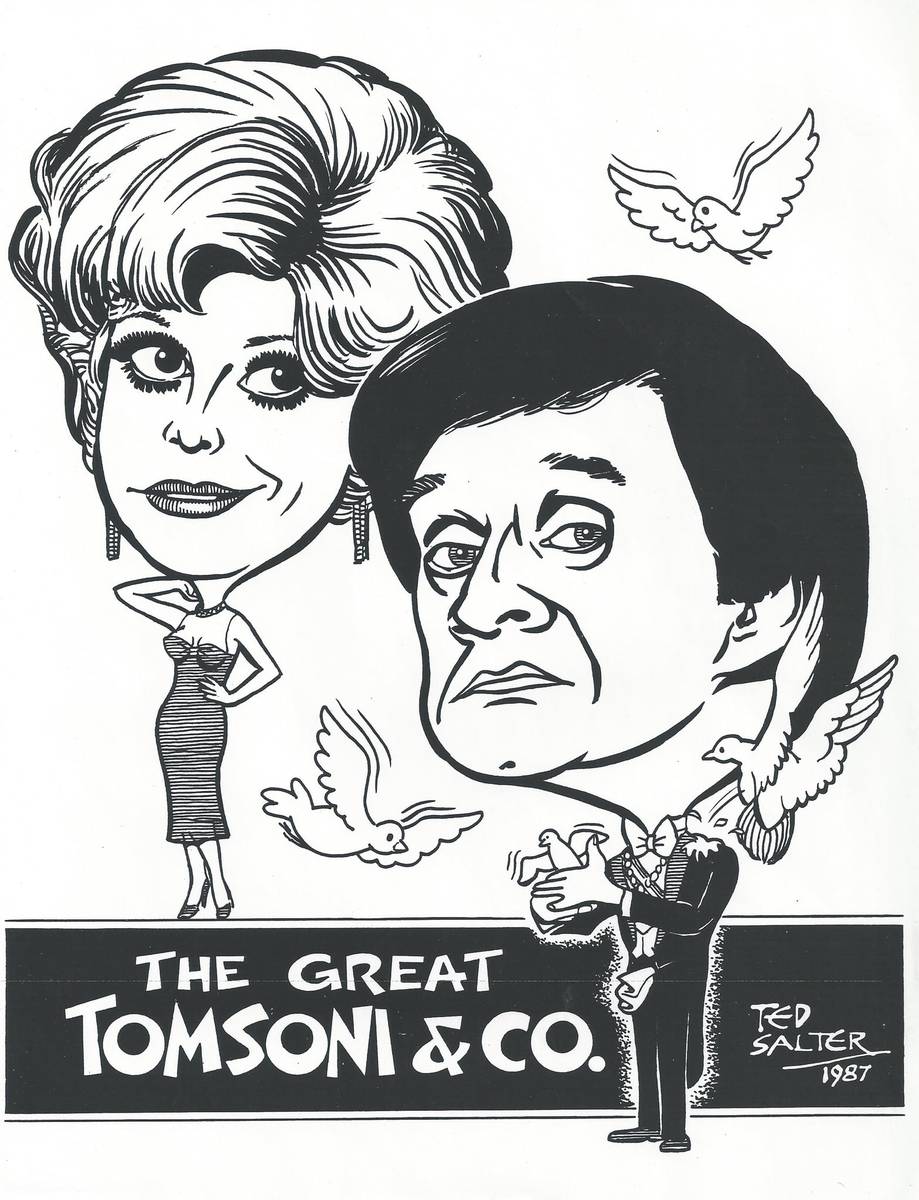 Johnny Thompson and Pam Thompson are shown in a promotional flyer from the 1970s. (Lance Burton)

As the sidekick in The Great Tomsoni and Company act, Pam Thompson had the gift of caring greatly while pretending not to.

“In her act with Johnny, she played it like, ‘I’m so tired of doing this assistant role,’” says Thompson’s longtime friend and Vegas entertainment professional Gabrielle Lyster-Allen, head of wardrobe at “Mystere.” “That’s how she portrayed it, and it was brilliant.”

Thompson died just after midnight Friday, at the Las Vegas home she shared with her friend Steve Mullica, after a five-year battle with Alzheimer’s. She was 84. Thompson had been in failing health since the death of her legendary husband, Johnny “The Great Tomsoni” Thompson, in March 2019. Her ashes will be laid to rest alongside Thompson’s at the Magic Graveyard in Colon, Mich. Donations in her name are encouraged to Burlycares.com.

Pam Thompson appeared in The Great Tomsoni act shortly after the two married in 1973. The duo would grow into a popular specialty act on the Strip in the 1970s and 1980s. The two toured internationally and across the country and were a Vegas showroom favorite.

Vegas magic veteran Fielding West was among the members of Thompsons’ inner circle who cared for the entertainer in her final days.

“She’s a magic angel who would elevate any magician on the planet,” West said. “She would walk on and off the stage with her chihuahuas behind her, which would break the place up. She played harmonica with Johnny onstage, which was really outside the magic realm but was just a brilliant routine.”

The Thompsons were ingrained in the magic community and worked with, and became friends with, an array of Vegas magic stars, including Penn & Teller and their assistant, Georgie Bernasek; Siegfried & Roy; David Copperfield; Lance Burton; Mac King; Criss Angel (appearing on the first three seasons of Angel’s “Mindfreak” A&E show); Mac King; Mat Franco; Mike Hammer; and Murray Sawchuck, among many others.

“Pam was an amazing comic actor,” Teller says. “When she first worked with Johnny, Johnny was a brilliant and elegant dove magician. The moment she walked onstage, the act became the funniest duo magic act ever.”

Teller was among the last to see Thompson in her final days. He remembered her as the daughter of a tea-drinking, English mother.

“Even when she was doing the nuttiest stuff, there was a sort of underlying dignity and beauty that made the broad comedy more convincing,” Teller said. “There was never a hint of self-awareness — it was perfect, deep acting.”

Thompson wrote extensively about the role of magician’s assistant, so crucial to the success of any magic act. When Teller and Bernasek were working on a Tomsoni and Company tribute bit for the Penn & Teller show, Thompson took note of Bernasek’s too-graceful gait.

“I know what the problem is!” Thompson called out. “Your shoes are too comfortable!”

Teller recalled, “She was den-mother and host to a huge number in the magic community, always funny, frank, kind and super-generous. Some magicians actually moved in and lived at their home for years.”

Penn Jillette said, “Johnny and Pam were everything to us, our heroes, our mentors, our inspiration, our friend. The entire magic community seems to say that Pam was the funniest woman ever to walk on stage. I don’t understand why there is any limit by gender. She was the best.”

Copperfield has dedicated a piece of his famous Las Vegas magic museum to the duo.

“Pam was an amazing person and a beautiful soul,” said Copperfield, running 15 shows a week at his eponymous theater at MGM Grand. “So kind, she was always willing to help anyone. I am honored to have a lovely exhibit of her and Johnny in my museum. Pam always made you smile.”

In 2010 she became the first magicians assistant ever to be awarded a “Performing Fellowship” from the Academy of Magical Arts.

“She was an amazing actress who nailed her scenes effortlessly,” Burton said. “Her comic timing was perfect. She kept us all howling on set. Pam and John were family. I feel like I have just lost my parents again. It’s a very sad day.”

King, now headlining at Excalibur, said, “She was so much more than the “and Company” in The Great Tomsoni and Company. She was a wife, mother, partner in crime, actress, instigator, and friend. I sure did love her.”

Teller talked of the two working a show, and a stagehand noticed that they were bickering bitterly before they went on. Afterward, the stagehand asked Johnny, “Is everything all right between the two of you.”

Johnny laughed. “Of course. That’s just us getting into character.”