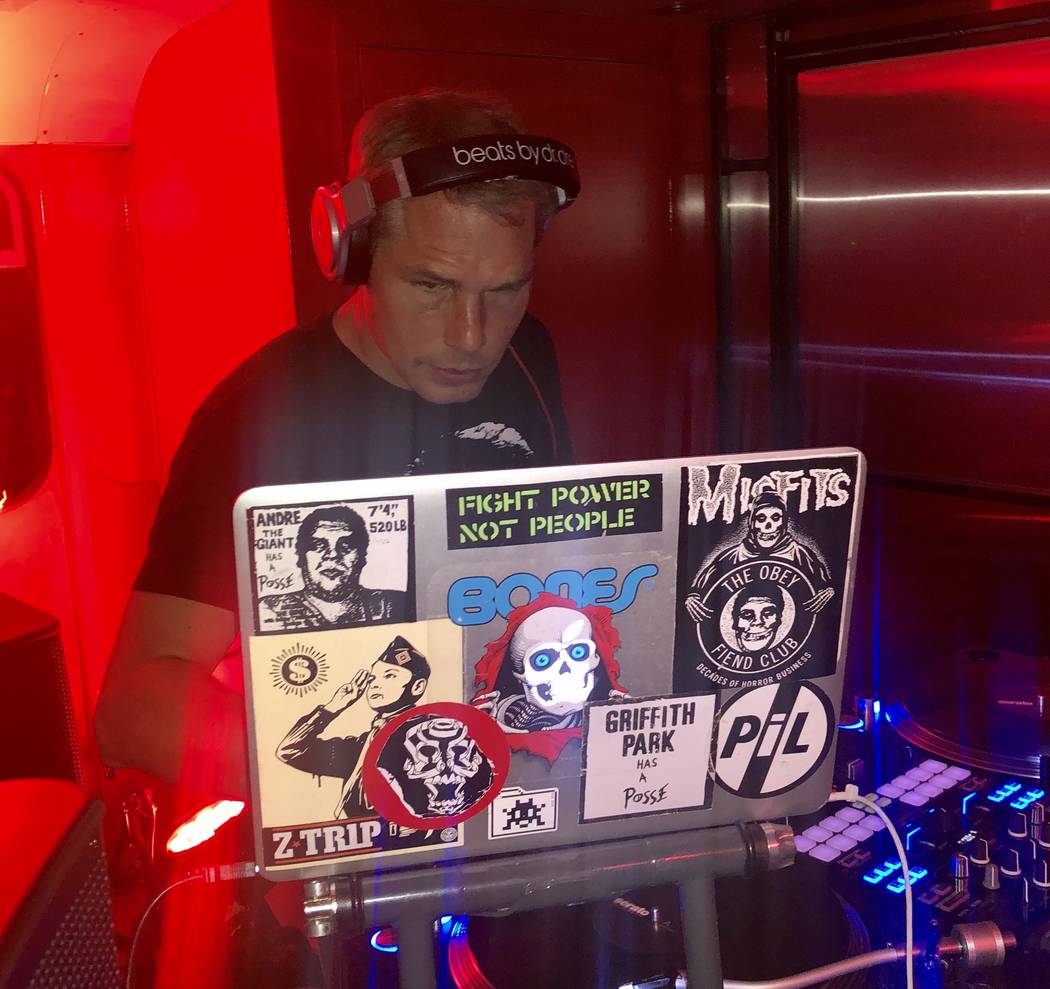 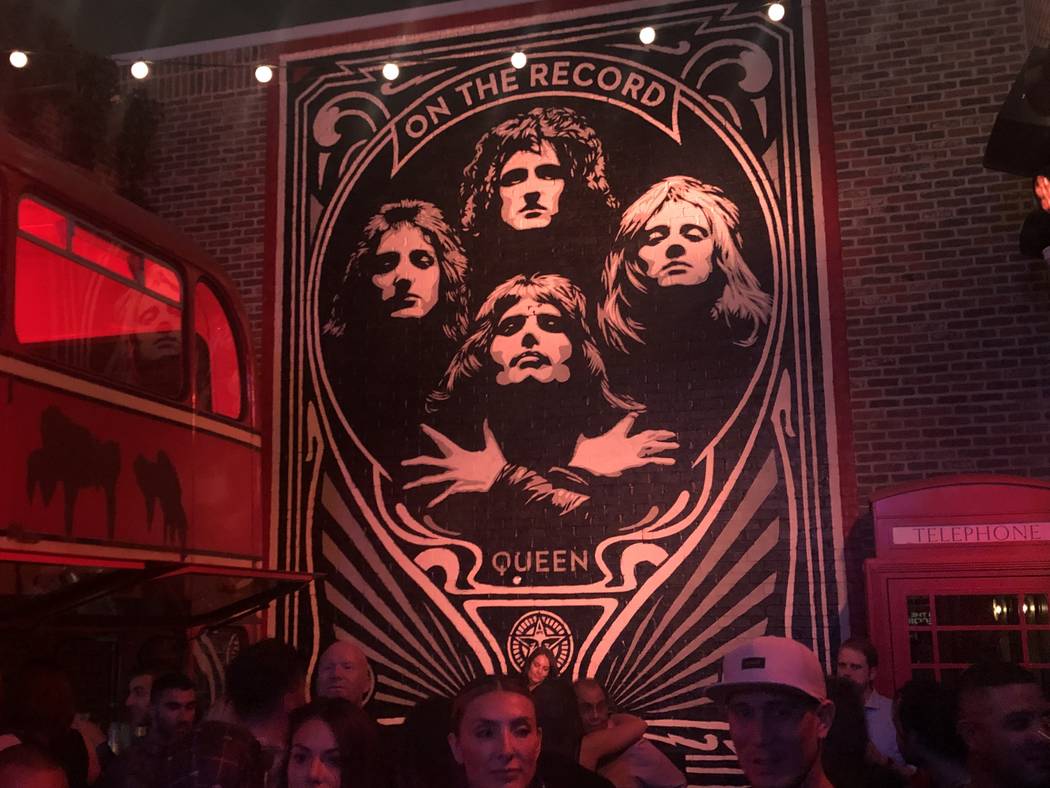 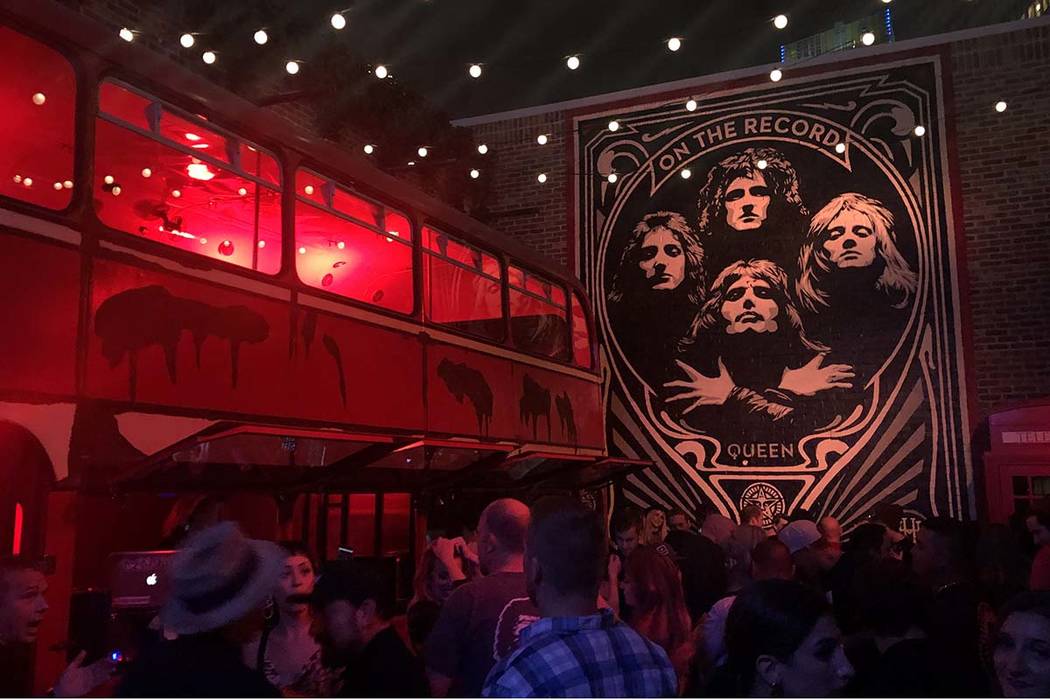 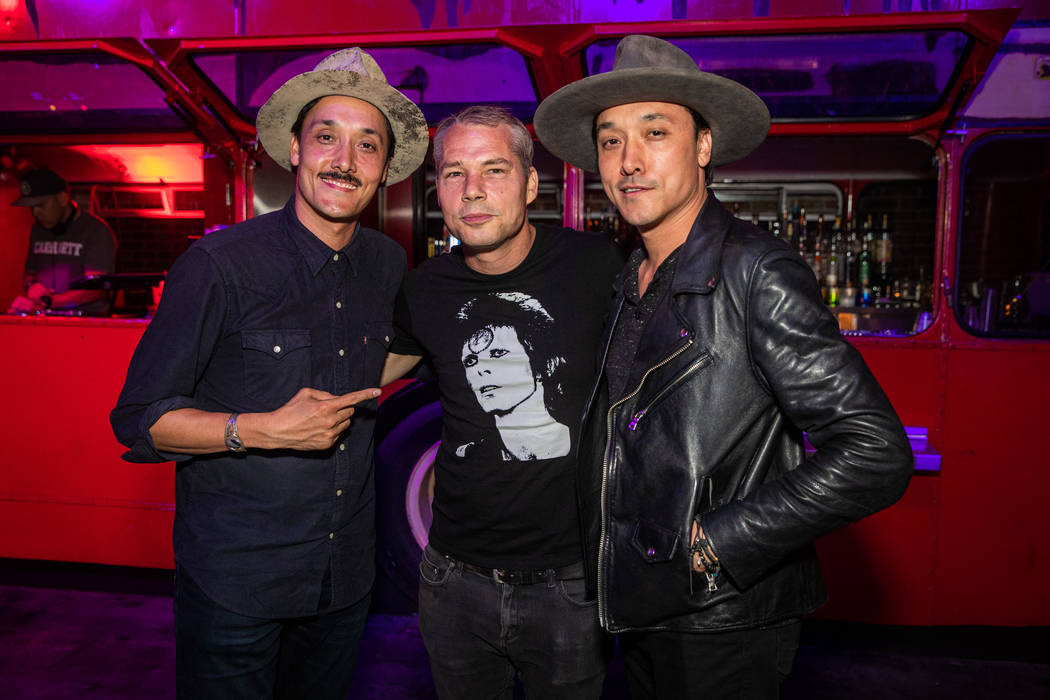 Shepard Fairey with Jonnie (left) and Mark Houston (right). (On The Record) 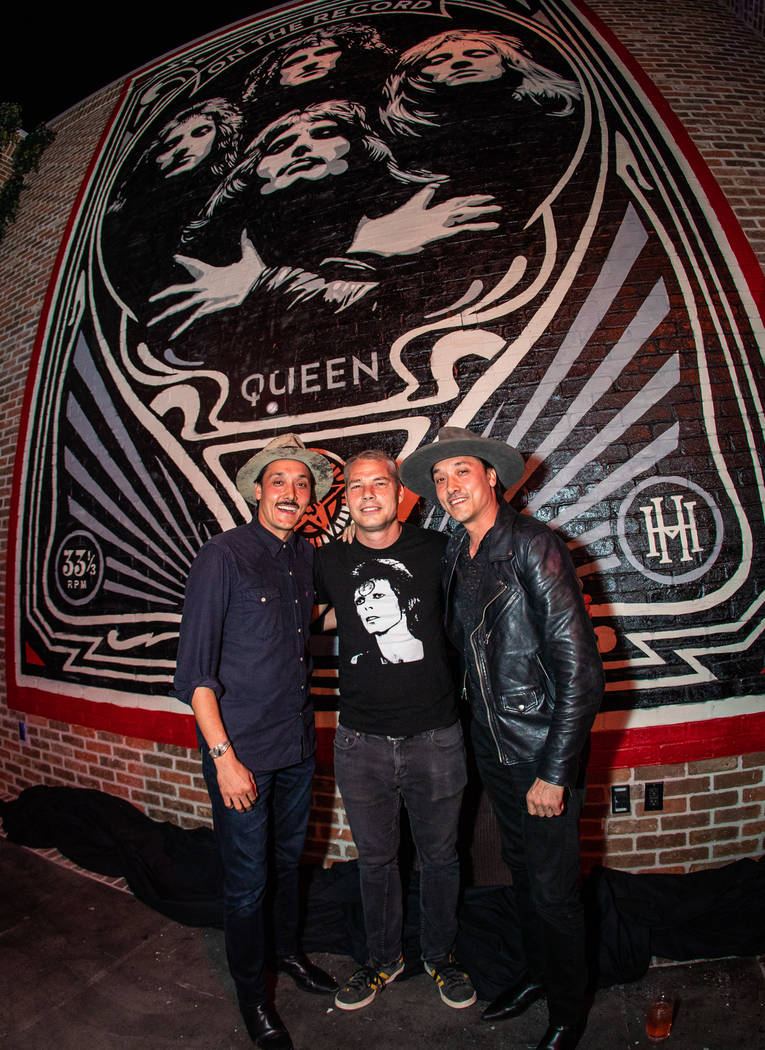 Shepard Fairey with Jonnie (left) and Mark Houston (right). (On The Record)

Pop artist Shepard Fairey talks of his relationship with Mark and Jonnie Houston, and the brothers’ Las Vegas nightspot, On The Record at Park MGM.

“Everything they do is at a higher level than most others,” says Fairey, best-known for creating the Barack Obama “Hope” poster image during the 2008 presidential campaign. “To be honest, I think a lot clubs in Las Vegas appeal to the lowest common denominator, but this has a more elevated curation to it.”

Fittingly, Fairey himself was up there, on the top level of the ‘63 Bristol Lodekka double-decker bus that doubles as a DJ booth at OTR’s open courtyard. The Wednesday night party was an unveiling of Fairey’s latest piece, a black-and-white portrait of Queen against the brick wall overlooking OTR’s upper-level courtyard.

Fans of the band will recognize the work immediately as the cover of the “Queen II” album. A passionate vinyl collector and rock ‘n’ roll fan, Fairey was drawn to Mick Rock’s famous photo portrait of the band.

“One of the things I love about Queen is, Queen can reach a wide audience and yet still be very unusual,” Fairey says. “They are an atypical band, and yet they made anthems that really bring people together.”

Fairey’s work is featured in such revered museums as collections as the Smithsonian, the Los Angeles County Museum of Art, and the Museum of Modern Art in New York City. The 49-year-old artist is also a serious DJ. He would take the booth on the lower level of the bus for a late-night spin.

Yes, “Another One Bites The Dust” was in his playlist.

Cast members of “O” are accustomed to performing in the water — through rumors that some have gills are unfounded — and are expanding to the sidewalks this weekend for their first appearance at Lake Bellagio.

The Cirque artists will take to the Strip and lure tourists to the viewing areas facing the famous Fountains of Bellagio, where they will perform at 3:30 p.m. Saturday and Sunday. They return to the aquatic feature Oct. 12-13.

“This will involved the entire cast, and it’s not just them performing on props on the water,” “O” company manager Tony Ricotta said in a phone chat Thursday afternoon. “They will be mingling with guests and leading a parade to witness this experience.”

The event is free and open to the public as the show celebrates its 10,000th performance at Bellagio. Two numbers from the show, the Barge and the Contortion acts, will be performed.

Cirque is planning to record the shows for promotional footage. The company has never staged an act on Lake Bellagio in “O’s” 21-year history. Cirque’s leading ticket-seller moves to a seven-day-per-week schedule, and the lake appearance is a well-timed way to market the show’s expansion.

“It’s really a great visual picture,” Ricotta said. “After all these years of working together, we finally have a blending of these two brands.”

Golden Nugget owner Tilman Fertitta is signing copies of his new book, “Shut Up and Listen,” from 3 p.m.-4 p.m. Saturday at the hotel. The book offers “hard-hitting business advice,” says a promotional release, so protect yourself at all times.

A long-running, highly acclaimed and financially successful stage show is facing an uncertain future. Our friends Penn & Teller continue to be the top draw at the Rio, where they have headlined for 18 years. They remain a solid seller even as the hotel has sagged; some nights, it seems all 1,300 visitors to the casino are in the Penn & Teller Theater.

But as Caesars Entertainment has just sold the 21-year-old hotel to investment group Imperial Companies of New York and is now leasing the resort for two years, P&T might be destined for new digs in the not-so-distant future.

The guys are not commenting on the sale or their future just yet, but over the years Caesars execs have reviewed moving the show to Flamingo Showroom and also Jubilee Theater at Bally’s over the past few years, only to keep it at the Rio.

P&T could be enlisted to solve one of Caesars’ chronic concerns — the empty Paris Theater — as the company completely lets go of the Rio. It makes sense for P&T to move the show to solve that problem, except for the in-and-out convenience and spacious design of the P&T Theater, which is still a great and grand venue.

Donny back to ‘DWTS’

Donny Osmond, a former champion on “Dancing With the Stars” (I remind of this because he hardly ever talks about it) is returning to the show for a one-off appearance this season. Osmond told the audience Wednesday night that he has heard from casting director Deanna Katz (no relation) and this is a go; the details are to be announced.

Osmond also said he picks Sean Spicer to win this season’s “DWTS” title. Osmond’s line, “When he was White House press secretary, he had to do a lot of tap-dancing.”

Aerosmith was forced out of Thursday’s show at Park Theater because Steven Tyler required vocal rest. He should be all right by Saturday, I hear. This is a thing in VegasVille, always, as Marie Osmond missed Friday and Saturday’s performances at Flamingo Showroom for that very reason. …

The new “Magic Mike Live Las Vegas” theater at Sahara Las Vegas will be built at the top of the escalators, just off the casino floor in the convention center. It should seat about 500. Look for a significant national-TV push from Channing Tatum in the show’s relaunch next spring. …

A production show is planned for the aforementioned Jubilee Theater beginning in December. Some say magic. Others look at the options and say, “Wow!” …

“Opium” at the Cosmopolitan of Las Vegas is cutting its musicians in the first week of October, usually one of those cost-cutting “indicators,” but the show is also adding a juggling act and planning another new number by the end of the year. …

What do Frank Marino and Raiders owner Mark Davis have in common? Both were spotted at Italian American Club this week. Separately. Marino could conceivable stage a one-off in the classic IAC showroom. …

Consistently hearing that an expansion is planned at 1Oak Nightclub at Mirage, creating a more showroom-scaled space. And Cirque has been recruiting veteran Vegas performers (including some familiar names) for a show targeted for the Bank space at Bellagio.