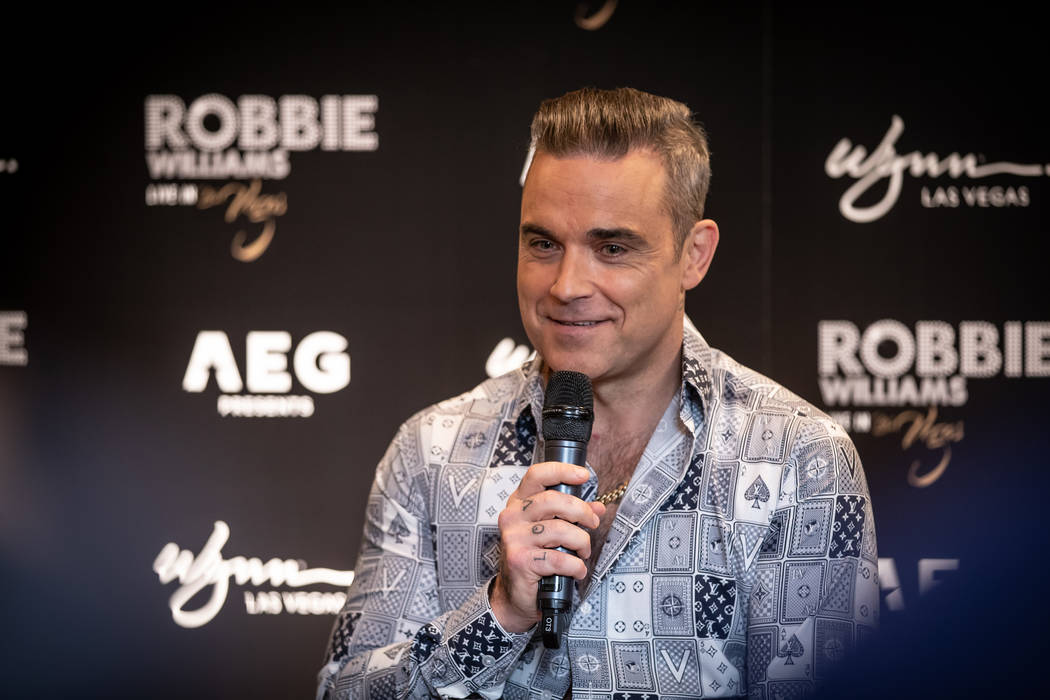 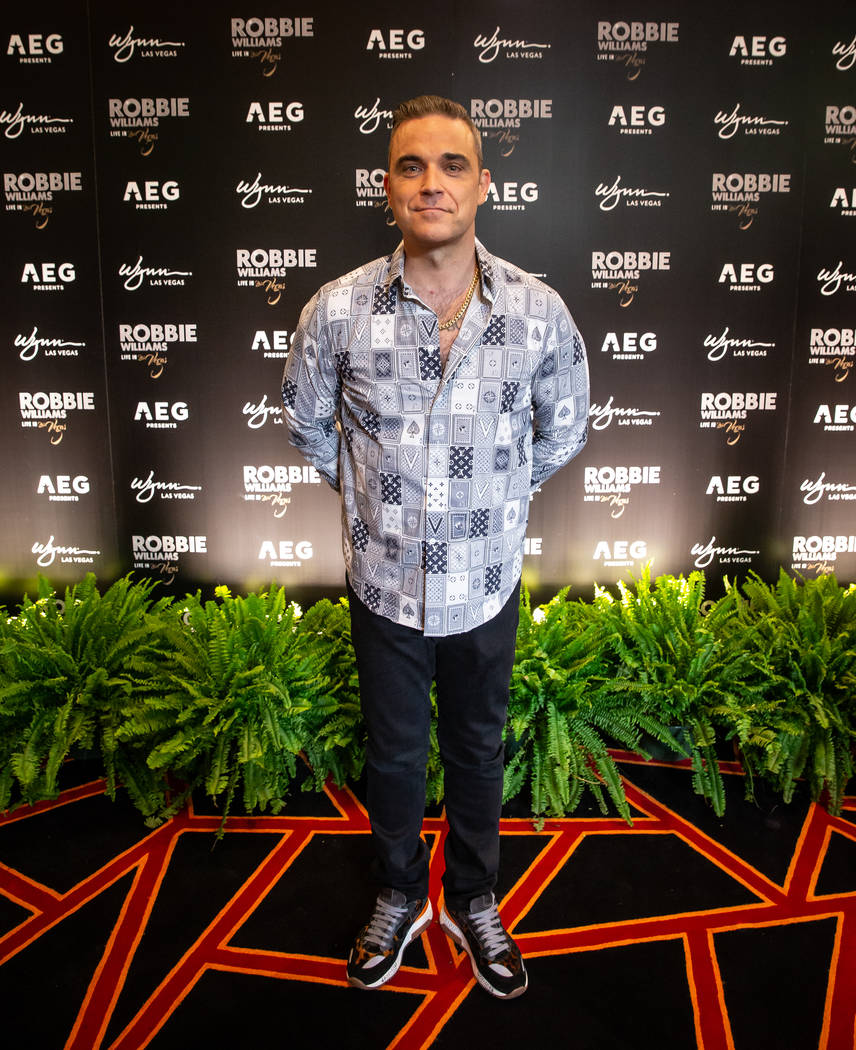 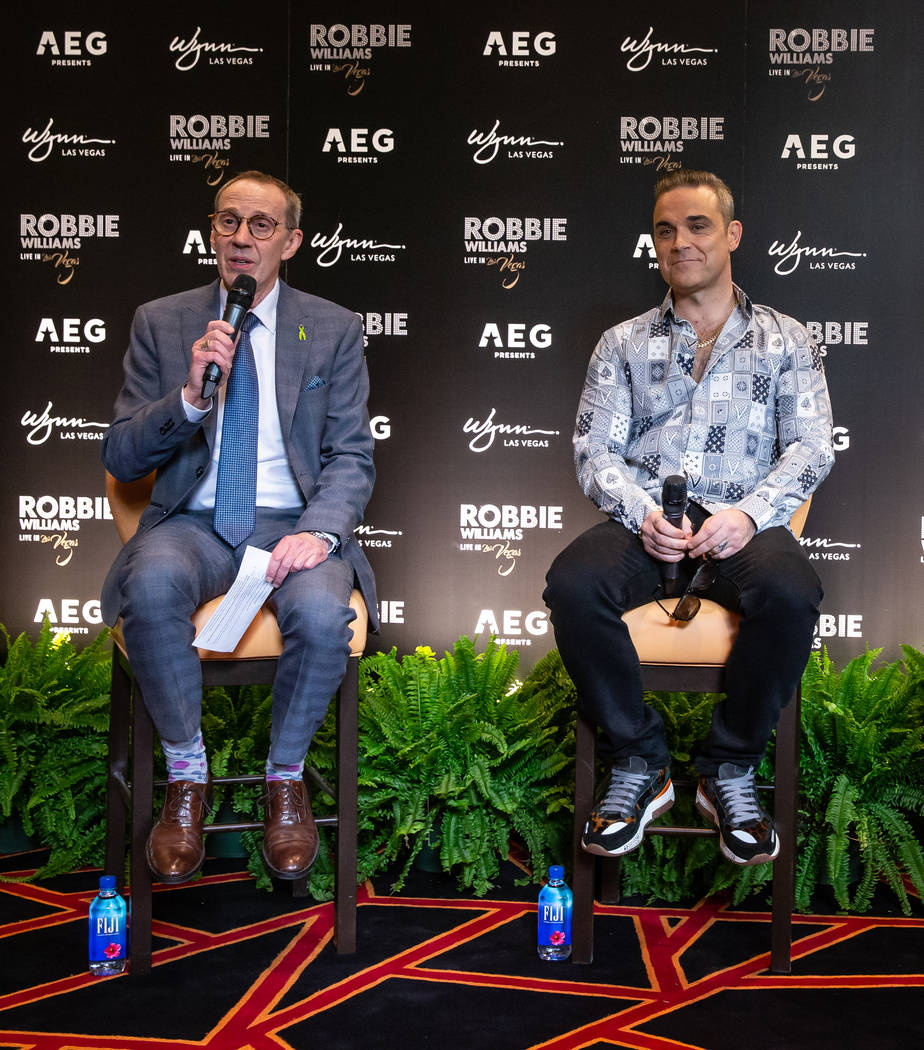 That would have served as apt title for Williams’ series at Encore Theater (except for the expletive), but as it is he’s going with “Live In Las Vegas.” This is really the Robbie Williams Show, opening Wednesday night, and he’s already sparked intrigue in the Vegas entertainment scene with his swift ticket sales.

Remarkably, all of Williams’ shows this month and those in June and July are listed as sold out.

Asked to further elaborate on his popularity before even playing one show on the Strip, Williams said, “Yeah, it’s an ego stroke. It feels good. But I’m an entertainer. Not a lot of people are specifically doing what I do, singing and telling jokes, pandering to the audience — people see it and want to see it again.”

Williams quite clearly a Rat Pack devotee — he seems to have borrowed his hip vernacular and swagger from his idol, Dean Martin. He has performed “My Way” in his touring show, and recorded “Something Stupid,” the Frank and Nancy Sinatra duet, with Nicole Kidman. That song, too has been Williams’ live show.

In November, Williams noted that, “My vision is to bring everything I’ve learned over the last 30 years of my performing career and be a regular feature in Las Vegas.” But he’s not yet ready to commit past his original run through July, regardless of his advance sales.

Some @robbiewilliams action from @WynnLasVegas … Vegas is his kinda town … pic.twitter.com/aS2vUPDKYY

“I hope it can go further, but we haven’t done the first show yet,” he said. “I don’t know how it’s going to feel onstage, how the audience is going to react, or how I can meet my own expectations, which are incredibly high.”

On the topic of affable U.K. pop artists, the documentary “After the Screaming Stops” has been praised by comic actor Ricky Gervais. This is relevant if you’ve seen the doc about Matt and Luke Goss’s turbulent reunion as British boy band Bros. Matt Goss occasionally, and unintentionally, slips into the sensibilities of Gervais’ David Brent character from “The Office.”

The moments have been dubbed, “Brent-isms.”

“There are so many highlights,” Gervais said in a story published by the Digital Spy web publication. “But there’s one bit that is spectacular, right: when he says, ‘My only toy was a dart.’ It’s so sweet! “And when he’s showing the picture of his bulldog as well. He says, ‘I had him painted with a pint’. Yeah, we can see that!

“Some of the Brent-isms were fantastic. But it was really sweet as well. That bit when they were crying, it really got me! I really genuinely loved it.”

If you’ve seen “The Office,” especially, you’ll get it.

That will be the official, new name of the the stretch of Clark Avenue honoring the late celeb journalist. The street runs in front of the entrance to the Cleveland Clinic Lou Ruvo Center for Brain Health and continues toward the Smith Center. The original, and unofficial, title of Robin Leach Way has been tossed — and this is final because the signs have been made.

The formal naming ceremony is set for 4 p.m. March 15, with Mayor Carolyn Goodman; Ruvo Center and Keep Memory Alive co-founders Larry Ruvo and his wife, Camille; and City Councilman Cedric Crear speaking on Leach’s behalf. Yours truly is honored to emcee this one.

“Robin was truly one-of-a-kind and we are forever grateful for his support of Keep Memory Alive and the Lou Ruvo Center for Brain Health,” Larry Ruvo says. “It is an honor to dedicate a piece of Las Vegas’ burgeoning downtown to Robin and his continuing legacy within the community and beyond.”

To Jose Canseco! Who is trying to goad Tim Tebow into some hitting instruction. Tebow is playing for the New York Mets in spring training, and Canseco has spotted some hitches in the Heisman Trophy winner’s swing.

One of Canseco’s posts: “If I can hit a softball 500 feet at the age of 55 you can hit 40 home runs in the major leagues if you let me help you yes I’m talking to you Tim Tebow.”

Otherwise, Canseco’s camp has not responded to texts asking if he’s filled out the lineup of his Finding Bigfoot adventure he advertised last month.

Guitar great Neal Schon has announced a Journey residency in Vegas in October. He let that fly during an interview last week on iHeart Radio. No venue specified, but Colosseum at Caesars Palace tops the odds-on list … Foreigner, recently reunited with original singer Lou Gramm, is also reportedly looking at a run at Venetian Theatre, though not finalized … Eager to see where all this convo about Shania Twain’s return to the Strip leads … Ran into famed director Kenny Ortega at the Wynn; he’s still working on the overhaul and upgrade to the “Lake of Dreams” multimedia production at the Wynn. He is one who is looking forward to seeing Williams’ production … Donny & Marie Osmond are in wacky mode. Marie hinted in interviews that Donny was the Peacock in the Fox show “Masked Singer,” all but ruining the surprise. Donny then told “Entertainment Tonight” that the duo’s departure at the end of this year is “a rumor,” though he has already made that announcement … Magic legend David Copperfield has been hitting the scene, at a taping of Penn & Teller’s “Fool Us” at the Rio on Friday and at “Opium” at the Cosmopolitan on Monday.