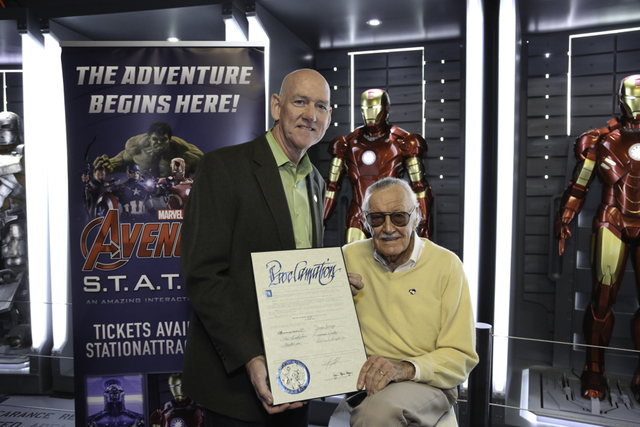 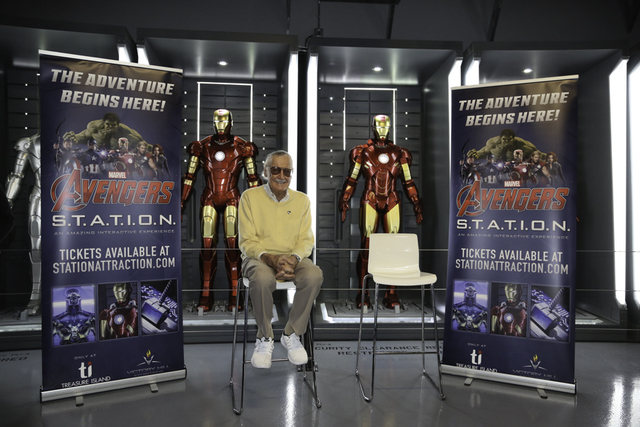 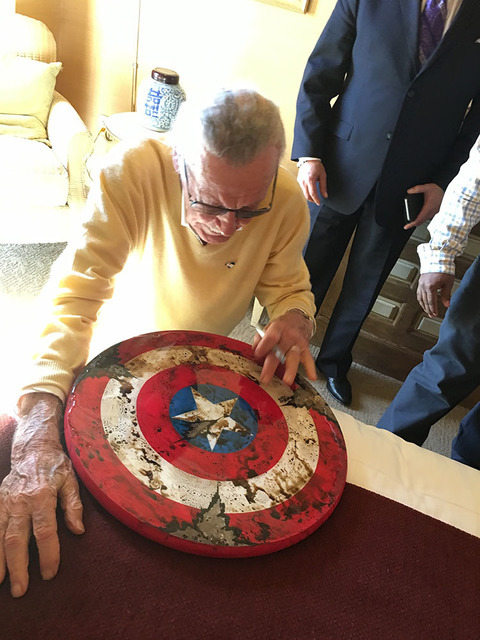 Stan Lee’s hearing isn’t what it once was, an allowance for a man who turns 94 in December.

But Lee’s vision is as keen as ever.

The design is the word, above two hands – one black and one white – clasped in a handshake. The pins are available at www.handsofrespect.com, $10 for two; keep one and give away the other.

In envisioning this project, Lee took the lead from his daughter, J.C., the day after the July 7 police shootings in Dallas that left five officers dead. The trend of such shootings across the country led Lee to use his ample star power to send his single-word missive to the masses.

“I think the one thing that was needed was respect,” Lee said in an interview shortly before County Commissioner Larry Brown presented him with a key to the Las Vegas Strip in a ceremony at the Marvel Avengers attraction. “We designed this to show a moment of solidarity.”

He added: “All cultures and colors need to live together, and I want to remind people of how important it is to respect each other.”

As the creator of the Fantastic Four, Captain Marvel, Spider-Man, Hulk, Captain America, Iron Man and the X-Men, Lee added, “I’d like to think all of my work, all of my characters are inclusive. They were meant to be. We never make any mention of color in the stories I’ve written. But we do have a black character, Black Panther, in a movie we’re working on that will be out next year.”

That film stars Chadwick Boseman, reprising his role from “Captain America Civil War” in the title role. “He actually lives in Africa, with his tribe, but underneath the village is a modern, very scientifically advanced city,” Lee says, his eyebrows arcing. “He’s a fighter. He’s very strong, like Captain America, but he created that entire city.”

Lee says his favorite character among the first collection he created in the early 1960s is The Thing from The Fantastic Four. “I tried to give him a sense of humor or put as much humor into him as possible to offset his appearance,” Lee said. “I gave him a blind girlfriend who would love him no matter how ugly he is. But in fact, if you look at him for a while, he doesn’t seem ugly at all. He seems cute.”

Lee says he always insisted that his comic book stories be written at a college level. The famous exclamation “Excelsior!” is derived from a Latin expression of high achievement. Lee has used it as his tagline throughout his career and laughs that “even people who don’t know what it means are shouting at me.”

For “Doctor Strange,” the new Marvel-theme movie starring Benedict Cumberbatch, Lee says, “I wanted a magician, but not one of these ‘abracadabra’ magicians, but instead have him use incantations like, “By the crimson bands of Cyttorak!” a reference to another character created by Lee.

“If there was a word that was right for the sentence and was a big word, I would use it,” Lee said. “The readers would know what it meant, and if they had to go to a dictionary to look it up, that’s not the worst thing in the world.”

Right now, Lee is interested in that one word, proudly pinned to his lapel.

HEADLINER IN THE OFFING

MGM Resorts Senior Vice President of Entertainment Rick Arpin said “one more major residency” is going to be announced at T-Mobile Arena within the next two months. I keep hearing Lady Gaga’s name mentioned by industry types as that chosen superstar, but not officially. She has no touring dates set for 2017 but will be close by in L.A. next year filming the remake of “A Star is Born” with Bradley Cooper.

What we can say definitively is the next headliner will be “a diverse, superstar talent that reaches a global audience,” as Arpin said.

A total of 80 to 100 dates in 2017 will be taken by resident performers; the rest either weekend or one-off performances. Announced already are Cher, Bruno Mars and Ricky Martin. “We feel four or five is the right level,” Arpin said. “We are looking at individuals, and also superstar bands. We’ve had individuals so far, but that is just a random thing. Hey, we would have loved to have had Led Zeppelin open the theater, but that wasn’t happening.”

As expected, Donald Trump impressionist John Di Domenico’s career has blown up since Trump’s presidential election victory. By the morning after the Nov. 8 election, the Las Vegas-based Di Domenico had received more than 500 congratulatory e-mails, texts and instant messages, not counting the open posts on his Facebook page. Since the election, Di Domenico has been back on the Fox News show “Red Eye” and “Chelsea” with Chelsea Handler on Netflix.

The month of December is nearly filled. And, he said, “I’ve quadrupled my speaking fee.”

The above-mentioned Brown made an announcment of sorts at the Lee event: He’s leaving politics in 2020. Brown is entering his third and final term on the Clark County Commission. Before running for county office, he served on the Las Vegas City Council from 1997 to 2009.

Brown’s plans after he leaves office in four years? “I’m not sure what I’ll do,” Brown said after presenting Lee with his commemorative key. “But it won’t be politics. I will be ready for something new.”