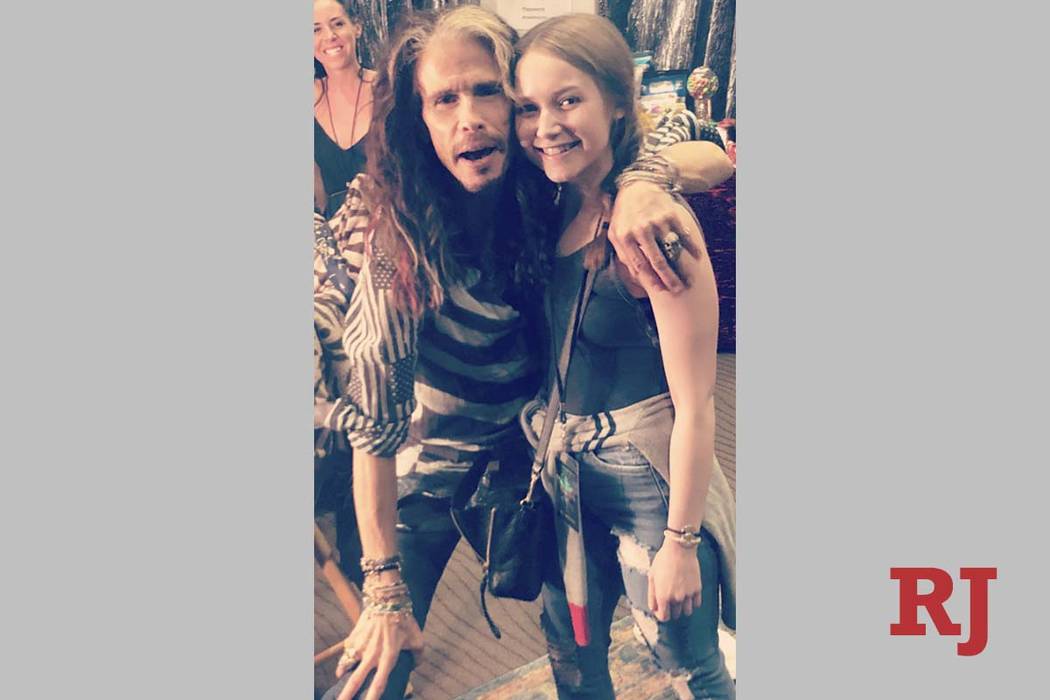 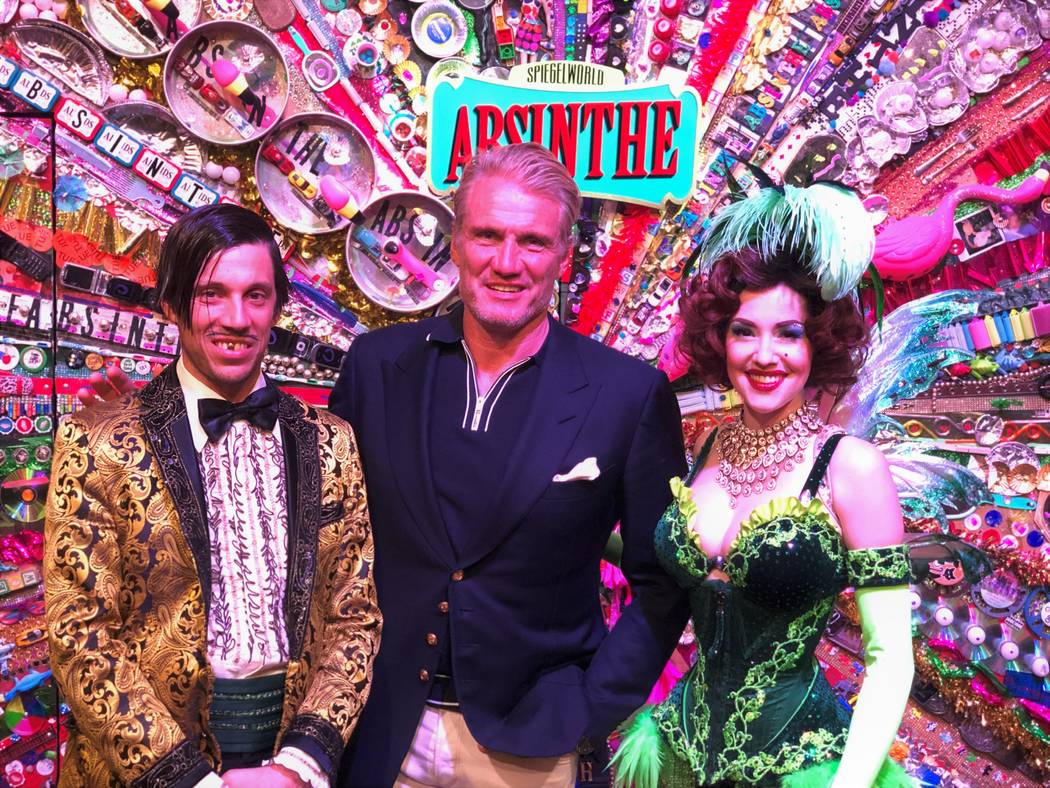 Actor Dolph Lundgren is shown with the Gazillionaire and Green Fairy at "Absinthe" at Caesars Palace on Thursday, July 4, 2019.

When Steven Tyler shouted to “Alexa” at Park Theater on Thursday night, it seemed like he was calling to the Amazon digital assistant. As in, “Alexa! Fire up the pyro!”

But no. He was calling to the real Alexa Ciancimino, who was watching Aerosmith rock it out from the VIP area on stage right. Tyler paced over to her, grabbed her hand and led her to the middle of the extended stage. Awaiting were two chairs, one of which was occupied by guitar great Joe Perry.

Tyler had Ciancimino sit facing the duo. “This is Aerosmith, up close and personal,” Tyler said. “Somebody’s gotta remember what I smell like!”

The two then performed “Hangman Jury” and “Seasons of Whither,” with Tyler playing harmonica (which he later tossed into the crowd) behind Perry’s six-string.

Ciancimino was not plucked from her spot randomly. Tyler knows her well, through his long friendship with Las Vegas entertainment exec Ken Ciancimino, Alexa’s father and the former entertainment vice president at Las Vegas Hilton. Alexa, 25, often refers to Tyler as an uncle or second father.

This bond has been reinforced through Alexa’s entire life as she has battled the pulmonary disease cystic fibrosis. She spent one week last month in the hospital and was taking IV antibiotics for four weeks. She is routinely treated for lung infections, but has improved enough to make it out with her family, including a couple of Aerosmith performances at Park MGM.

“We were in his dressing room at 7, and he asked where we were watching the show,” Ken Ciancimino said. “When he heard, he said, ‘Alexa, ‘I’m taking you out with me and Joe,’ and his team started coordinating.

Through her dad’s network of entertainer friends, Alexa has been previously been serenaded onstage. Barry Manilow sang, “Can’t Smile Without You” in Portland, Oregon, when Alexa was 12. But Thursday was the first time in the “Deuces are Wild” residency that Tyler had summoned an audience member to the stage for the acoustic medley.

“To have been right there front and center on the stage between Steven and Joe, in front of that crowd, was unreal,” said Alexa, who for a time worked as Tyler’s personal assistant. “I am so grateful and feel so loved by Steven, and I can’t thank him and the band enough for letting me be a part of that moment. It was something that I will remember forever.”

I ran into Aaron Benward and Travis Howard of at Rhythm & Riffs at Mandalay Bay on Thursday and immediately thought I was in the right place at the wrong time. But the co-hosts of Nashville Unplugged, which usually runs 8 p.m. Fridays, were performing to catch the crowd filing out of Brad Paisley’s private performance for M Life rewards members.

Benward and Howard had hoped Paisley himself would turn up to perform at Rhythm & Riffs, but no. Not even an open tweet (!) could coax him to the lounge. Nashville Unplugged, which has been running for 10 years, is back to its usual schedule.

He must break you

Yes, that was action-adventure actor Dolph Lundgren who visited “Absinthe” at Caesars Palace at 8 p.m. Thursday. Lundgren, who gained fame as Ivan Drago in “Rocky IV,” was in town to host Wednesday night’s World MMA Awards Show at the Palms.

Keep a watch on social media for a special guest at Gwen Stefani’s show Saturday night at Zappos Theater. It should be pretty spectacular.

“Opium” at the Cosmopolitan, which has expanded its seating capacity to 425 from 260 over Memorial Day and filled the place Monday, Tuesday and Wednesday.

Cesar Millan, aka “The Dog Whisperer,” is set for a weeklong run at the David Copperfield Theater this September, with Adam Steck of SPI Entertainment producing. … Steck’s company is also backing Melody Sweets’ upcoming project and says the two have narrowed their search to two Strip venues. Sweets appeared with legendary O.J. Simpson house guest Kato Kaelin to present at the MMA Awards show, and as she walked to the stage picked up a long, silk glove at the side of the stage, saying, “I dropped this!” which and got a blend of laughs and groans. … Buzz is intensifying about psychic Thomas John and Cleopatra’s Barge at Caesars Palace. John was all but ready to move into the Sands Showroom at the Venetian before contract talks unraveled. … The adult-circus-comedy show Blanc de Blanc should be made official, soon, at SLS Las Vegas/Sahara. … The Spare Room at Downtown Grand celebrates its formal opening on Tuesday with “Don Barnhart’s Hypnomania” and the comedy lineup “Delirious,” a rotation of stand-up comics, anchor the room.