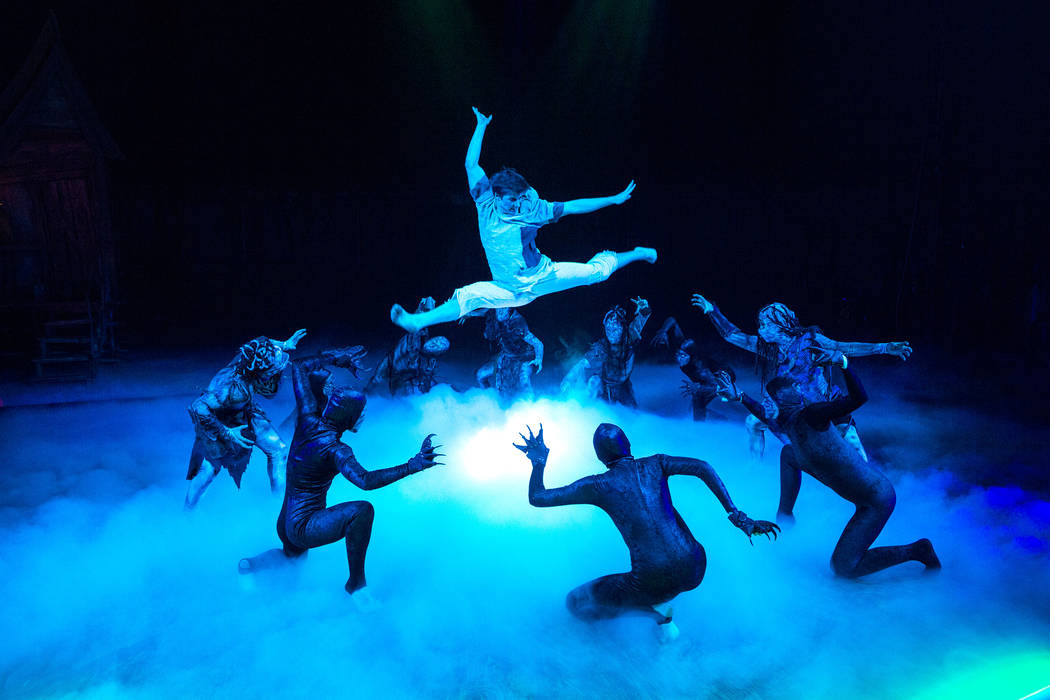 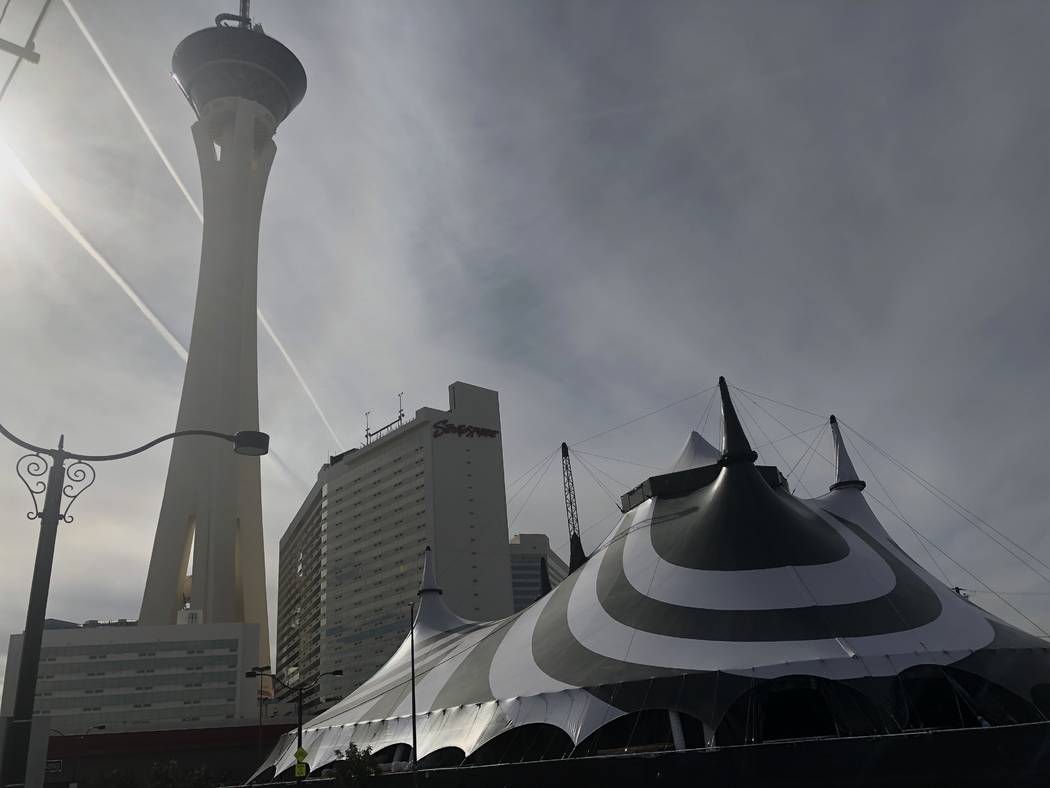 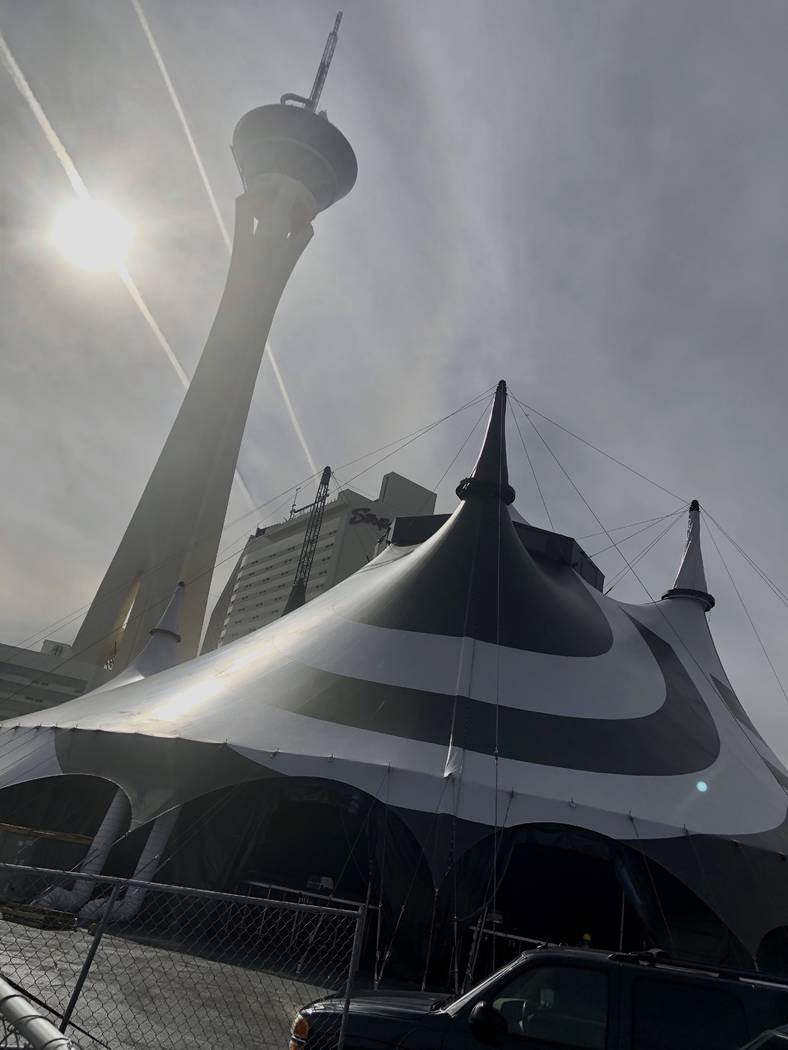 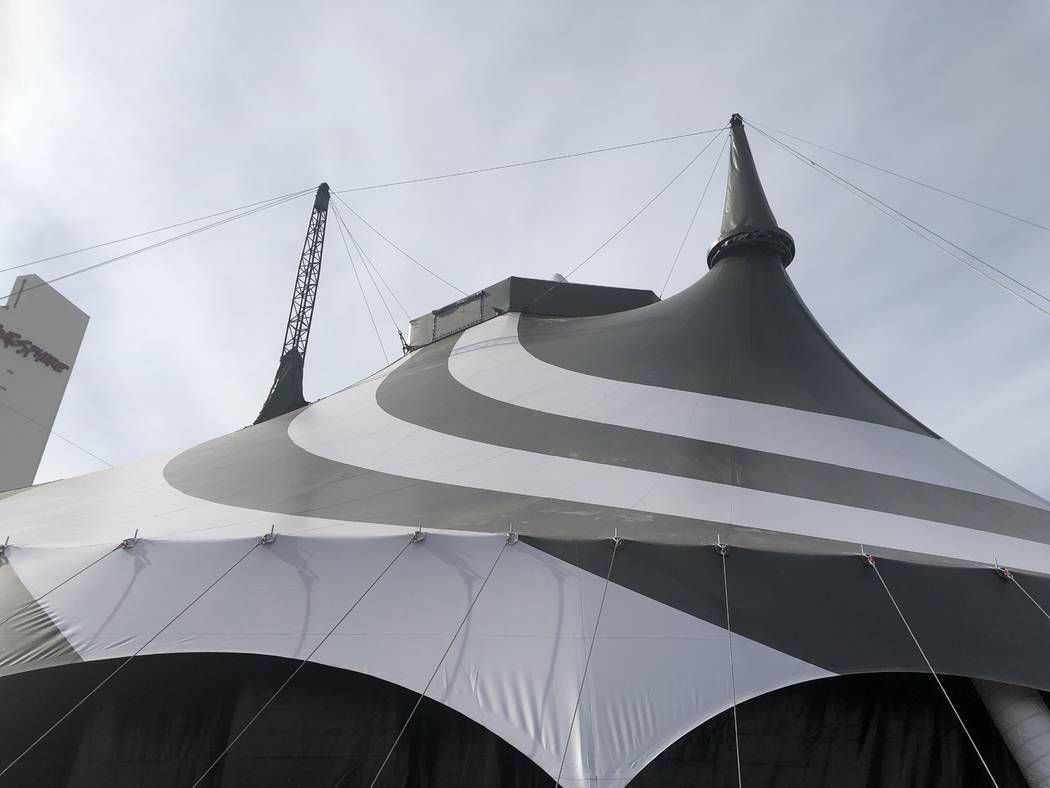 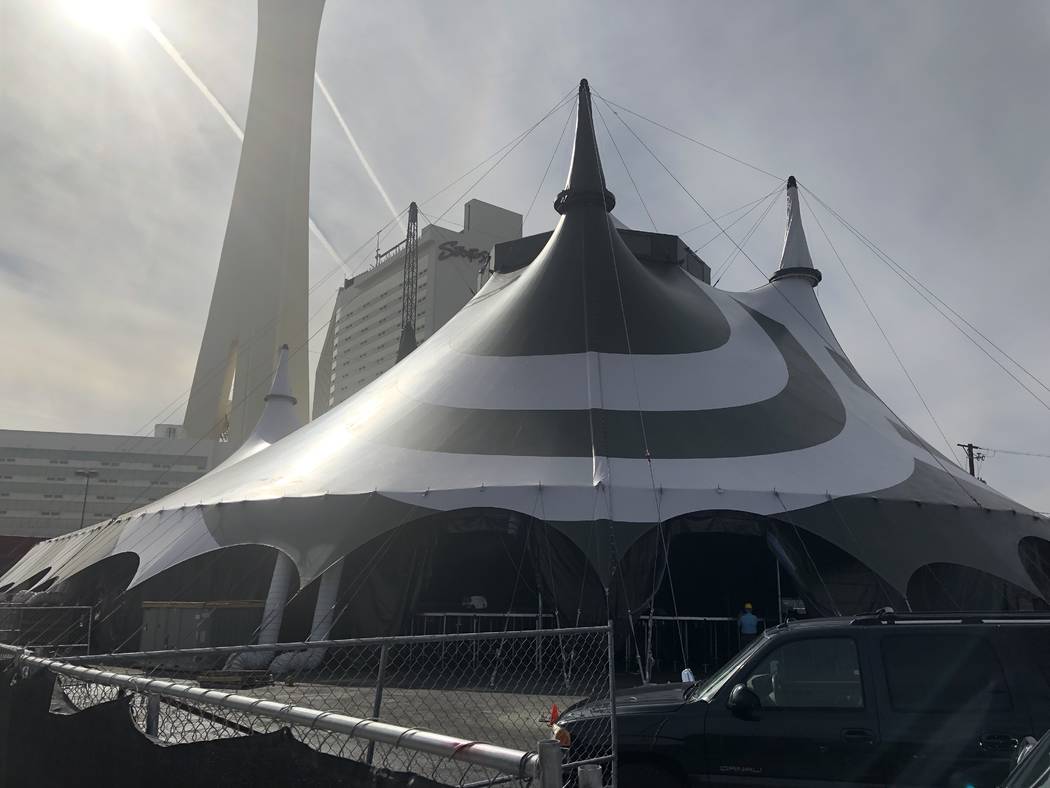 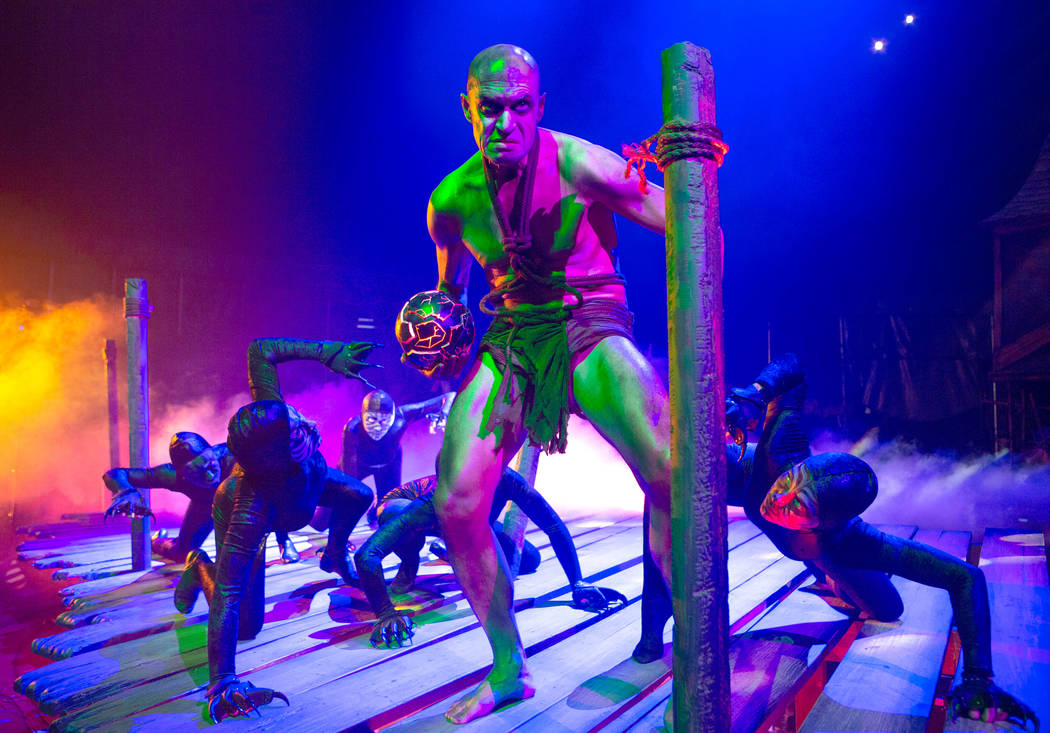 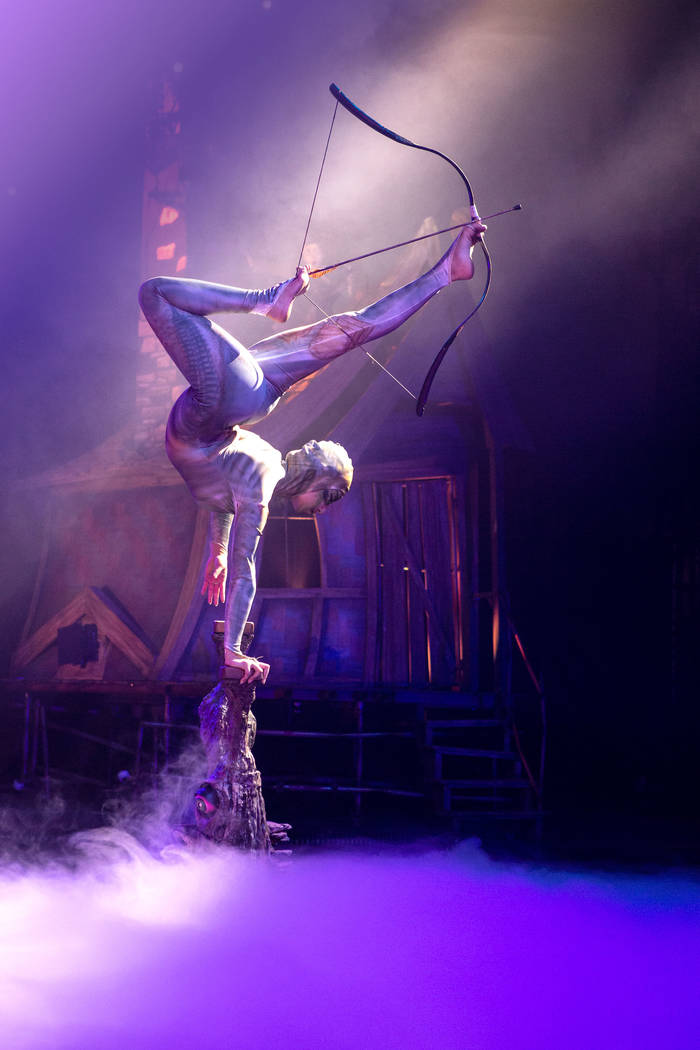 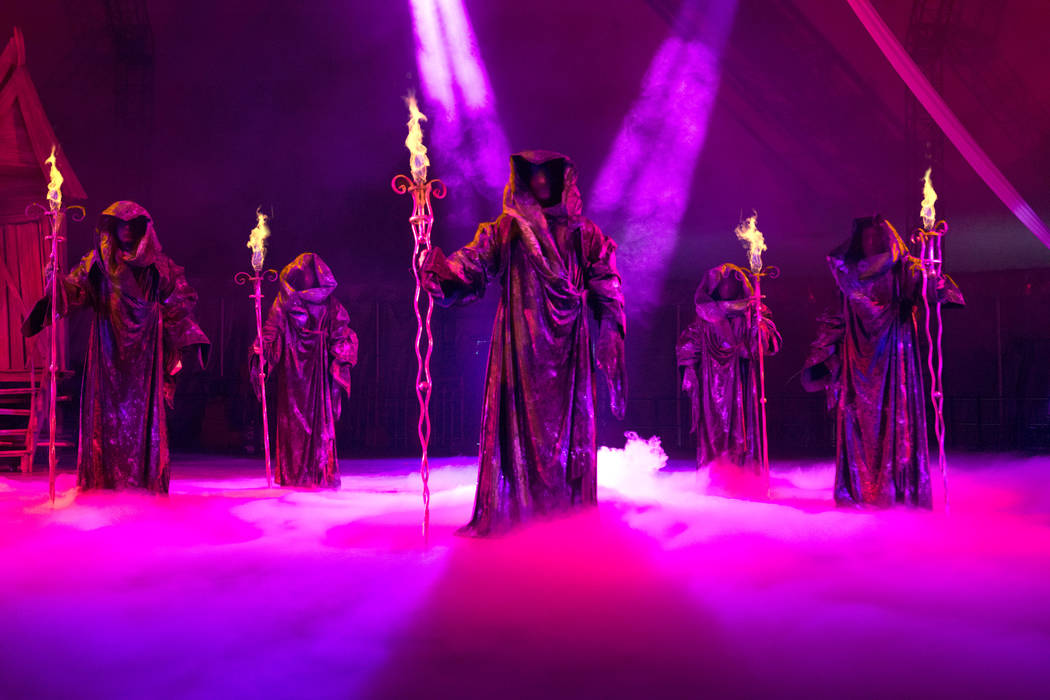 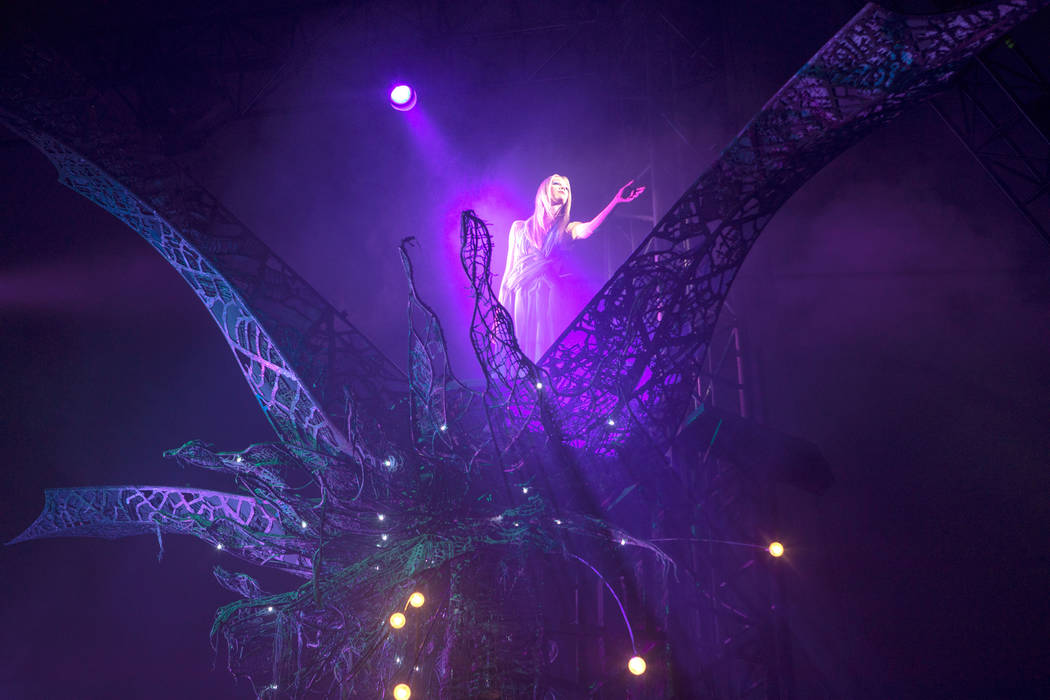 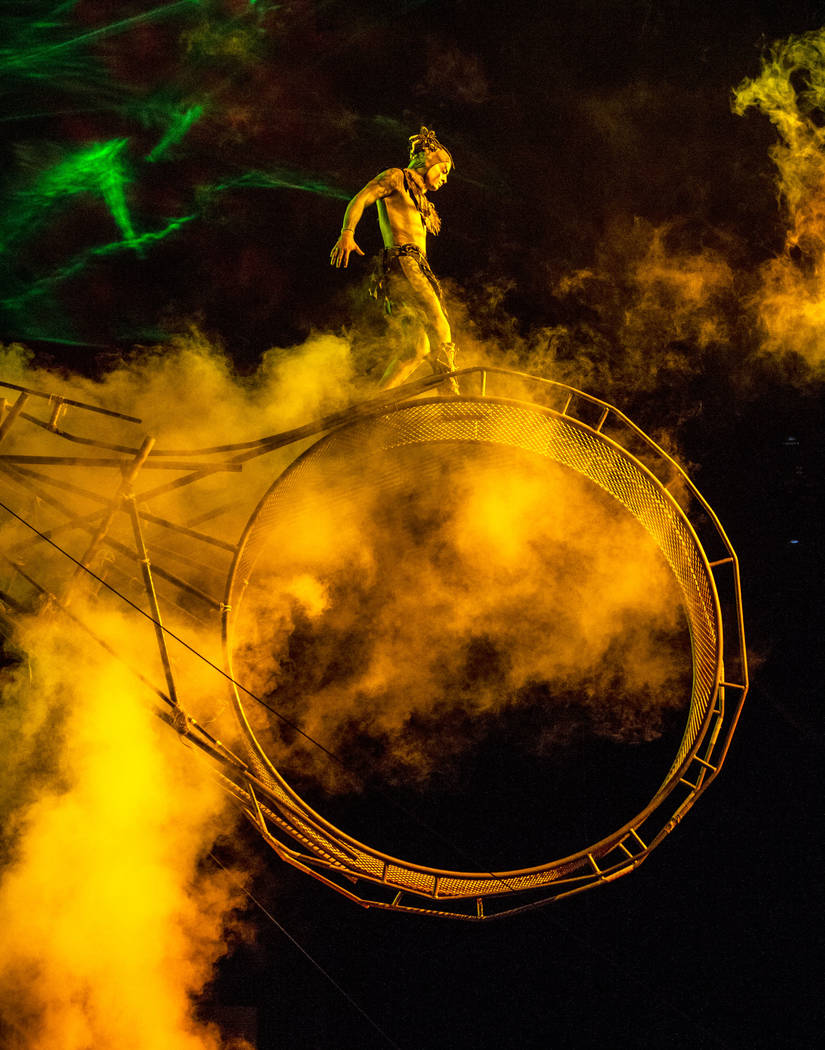 Stratosphere is famous for its high-rising needle, thrill rides at the tip of the building and for sparking debate about whether it is or isn’t on the Strip (I’ve always said it is, so fight it out).

But the property’s new visual oddity has been attracting attention on social media and also in the nearby neighborhood. The pointy, black-and-white tent is for the incoming production “Celestia.” We’ve first written of the show in mid-November. The specifics were released this week, with the production opening Jan. 30.

Mark your calendar, Celestia opens January 30.  Acrobatics, artistry and fantasy performed in the most unique tent you’ve ever seen. Ticket prices from…wait for it…$29! Stay tuned as we give you a sneak peek behind the scenes. https://t.co/OFWRyLOXDi pic.twitter.com/TMNLc1PpKw

“Celestia” runs eight times a week at 7 p.m Wednesdays and Thursdays and 7 p.m. and 9:30 p.m. on Fridays, Saturdays and Sunday (dark Mondays and Tuesdays). Tickets ranging in price from $29 – $89 (not including fees), available at Celestiashow.com or StratosphereHotel.com.

“Celestia” is jammed with acrobatics, advanced technology, artists and illusions in that 200,000-square-foot facility. Sasha Ivanov of the international live-production company Intrigue Shows is the writer and director. He is especially well-schooled in these types of spectacles. Ivanov is the former associate music director for Cirque du Soleil’s touring production “Kooza” and has produced more than 60 albums and composed music for Hollywood productions, including some earlier work from Lady Gaga, Pink, will.i.am and others.

Further comparisons of the show to Cirque du Soleil are inevitable — especially since the production incorporates a Wheel of Death, well-known in Cirque shows (currently in “Ka” at MGM Grand). The show promises real-time motion capture and new-age projection mapping. Thirty-two international artists make up the cast in the 90-minute, all-ages production.

“We’ve put together an incredible cast of performers to tell a timeless and philosophical love story that is at once unique and universal,” Ivanov said in a release announcing the show. “With technology that has never been used before in Las Vegas, Celestia truly has something for everyone.”

The theatrical show is backed by Vladimir Evseev, founder of the Allrise Financial Group, who has long wanted to stage a show on the Strip and who conferred with Ivanov about the concept.

The show’s creative team includes technical director of acrobatic elements Juan Carlos Valencia, with more than 25 years of experience with The Royal London Circus, Ringling Bros. and Barnum & Bailey Circus. “Celestia’s” Emmy Award-winning choreographer is Bonnie Story, who has worked on the Fox series “So You Think You Can Dance” and on the three “High School Musical” movies.

“Celestia is a visually stunning show filled with incredible acrobatics, and we are looking forward to introducing it here at the Stratosphere,” Christopher Fiumara, vice president and general manager of Stratosphere, said in a statement. “The spectacular, one-of-a-kind tent that houses this phenomenal production makes for an exciting addition to the Stratosphere, which is continuing to enhance the overall guest experience with world class entertainment, dining and amenities.”

Matt Goss returns to 1 Oak Nightclub on Jan. 18. Goss made the announcement on social media on Thursday, and also offered, “And who knows, maybe some BROS later in the year.” I am anticipating a Bros tour this summer, some new music from Matt and also a holiday solo tour for Gossy in ‘19.

Late night workout… Getting ready for my shows starting on 18 January @themiragelv … And who knows maybe even some BROS later in the year.… Maybe.

And, on the Goss topic, check his Instagram page for posts for his new pup, Reggie, a Christmas gift. Can’t be any cuter. Reggie, I mean …

Saying, “It was an honor to be there,” Mark Shunock served as stadium host at the NHL Winter Classic at a sold-out Notre Dame Stadium in South Bend, Ind. on New Year’s Day.

Hands down one of the most incredible experiences I’ve had the privilege of working! Thank you @NHL @notredame! #winterclassic

“They didn’t have to hire me and I am truly grateful to the NHL for the opportunity,” said Shunock, proprietor of the Space and founder of Mondays Dark. “Those 76,125 people getting up on their feet and screaming along with me will be something I cherish for a long time. Hockey is and has been a huge passion of mine and these moments I don’t take for granted.”

Shunock, who is also an arena host for Top Rank Boxing, interviewed players at intermissions and got the crowd pumped up. He’s also hired for the NHL All-Star Game in Jan. 26 at SAP Center in San Jose, Calif.

“I’m really looking forward to it,” Shunock said of the All-Star Game, “but thrilled to be back with my Vegas Golden Knights.”

“Sex Tips for Straight Women From a Gay Man” beyond sold out its New Year’s Day show at Anthony Cools Showroom at Paris Las Vegas. The adult comedy is the little engine that could (which could be the title of something in the show, actually), showing that a scripted show with an off-Broadway vibe can work on the Strip.

The A List, one of the city’s busiest, most talented and versatile music lineups lets it fly at Moneyline sports bar at Park MGM. A cool hang before Lady Gaga at Park Theater, or as you head to On The Record. Next shows are 7 p.m.-11 p.m. Saturday and Jan. 11.