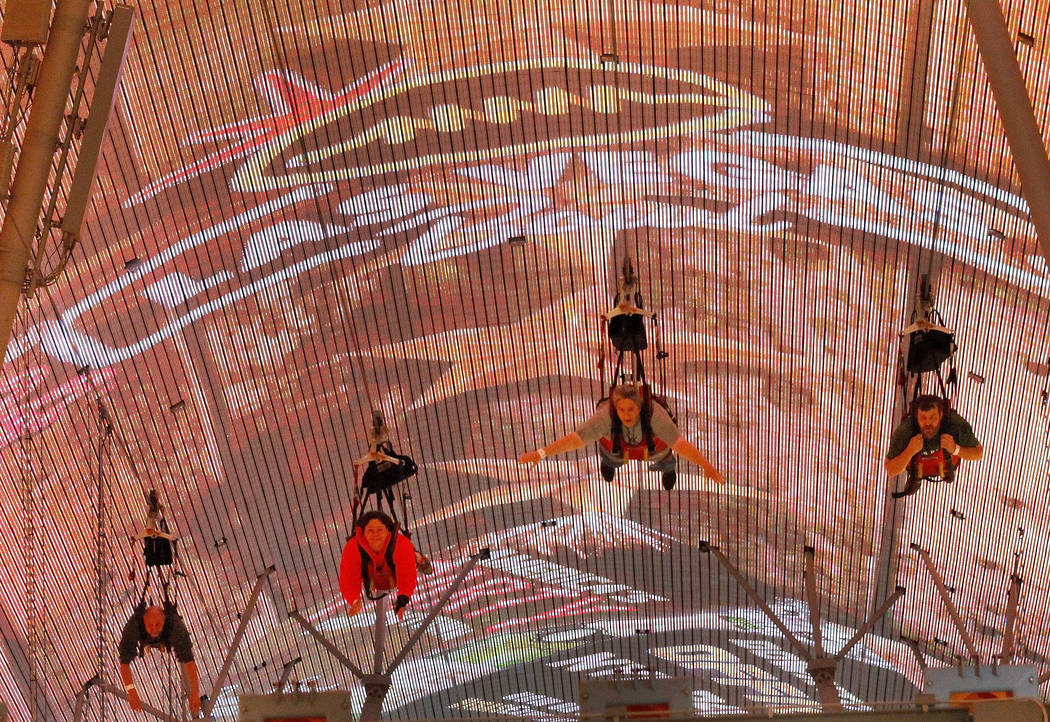 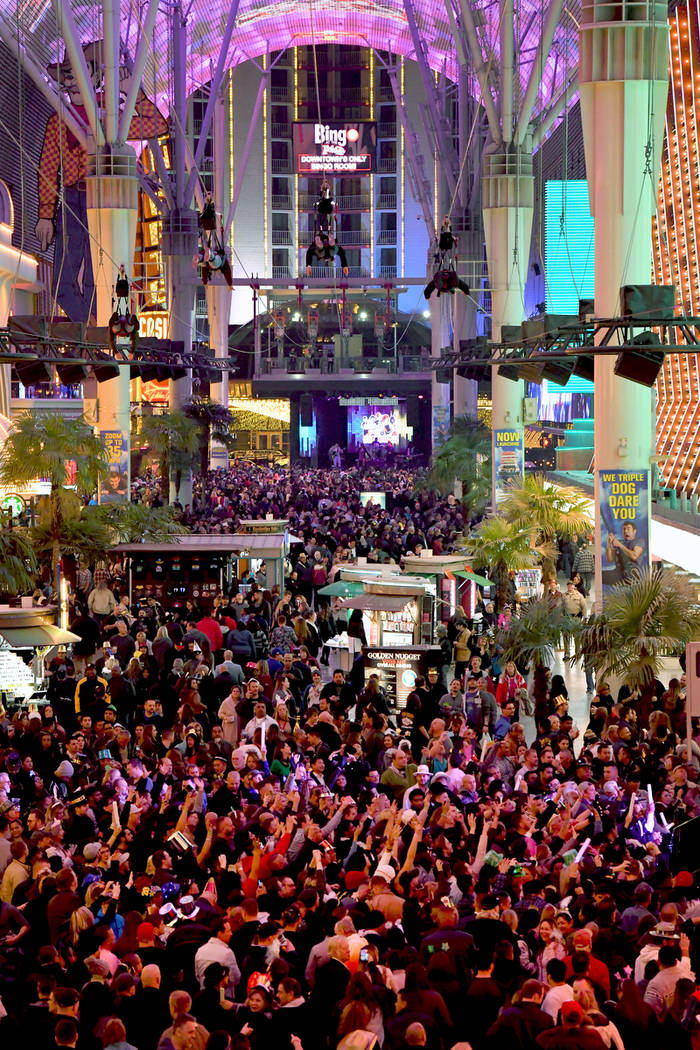 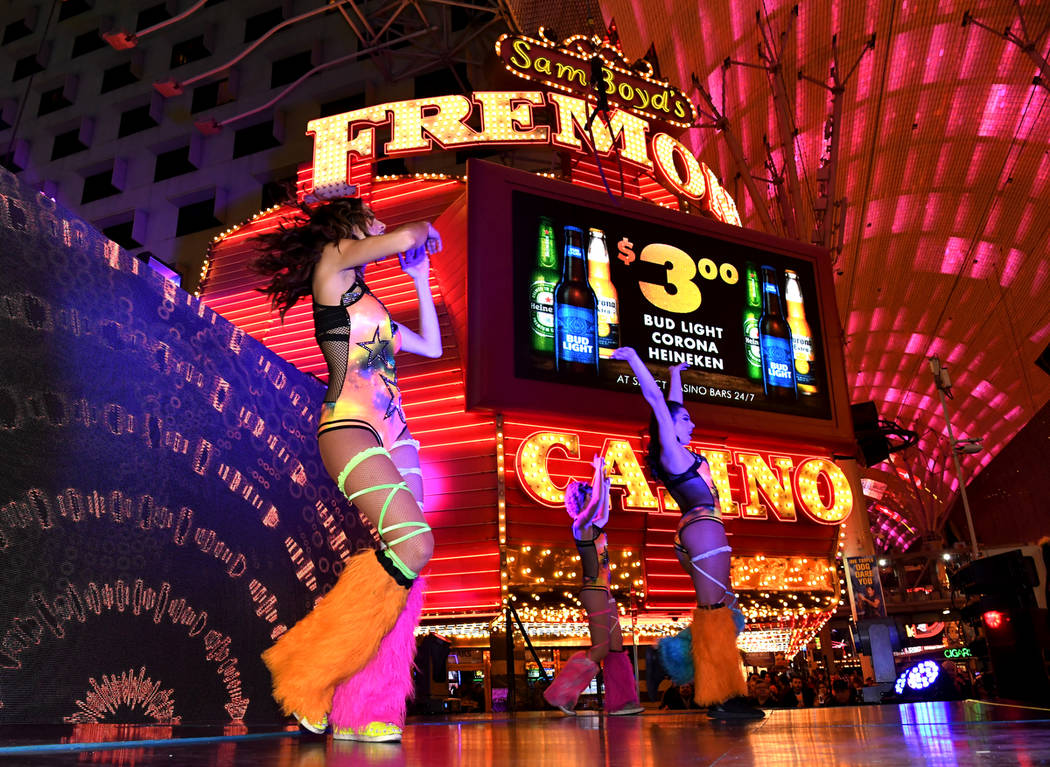 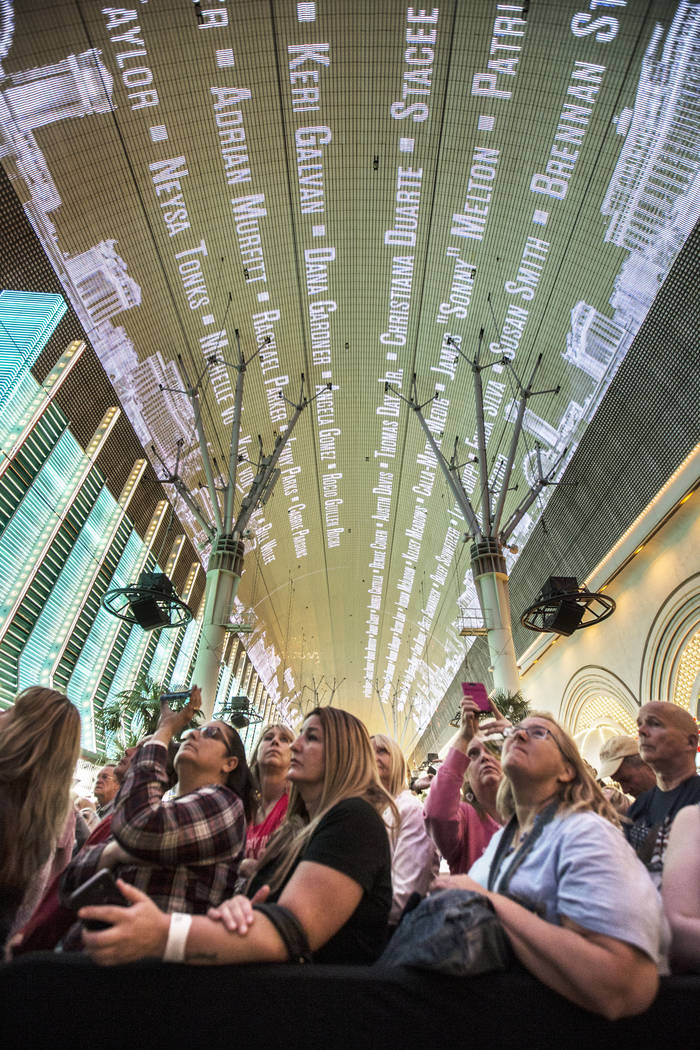 The names of the 58 people who were killed at the Route 91 Harvest Festival shooting are displayed on new a Viva Vision screen during a video montage honoring victims and first responders on Saturday, October 14, 2017, during the 5th annual Salute to the Troops, at the Fremont Street Experience, in Las Vegas. (Benjamin Hager Las Vegas Review-Journal @benjaminhphoto) 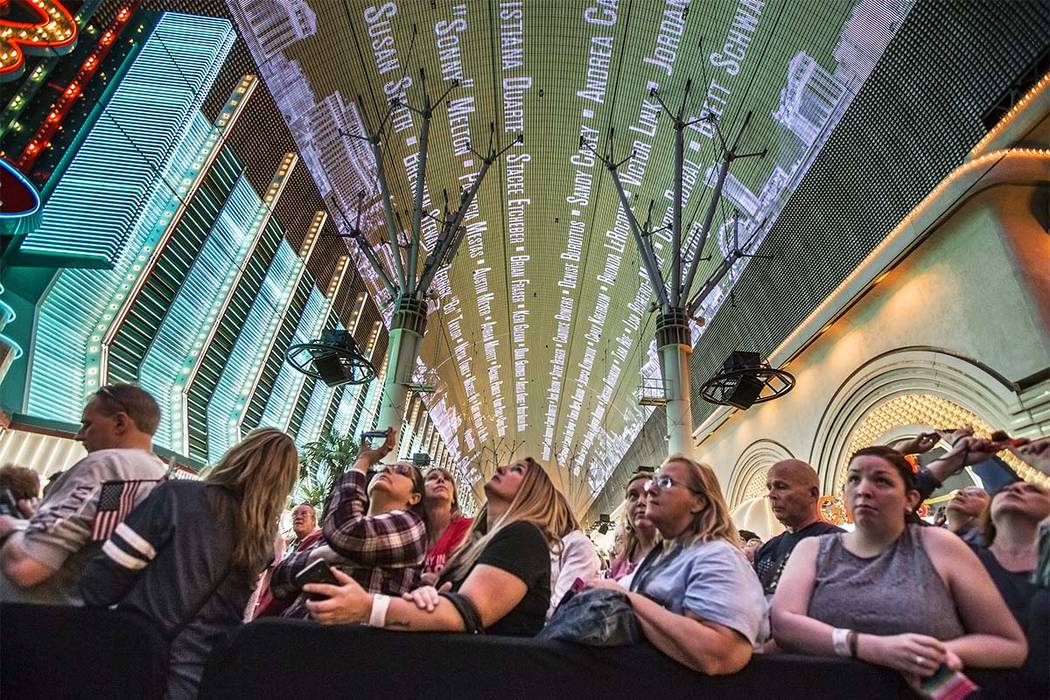 The names of the 58 people who were killed at the Route 91 Harvest Festival shooting are displayed on new Viva Vision screen during a video montage honoring victims and first responders on Saturday, October 14, 2017, during the 5th annual Salute to the Troops, at the Fremont Street Experience in Las Vegas. (Benjamin Hager Las Vegas Review-Journal @benjaminhphoto) 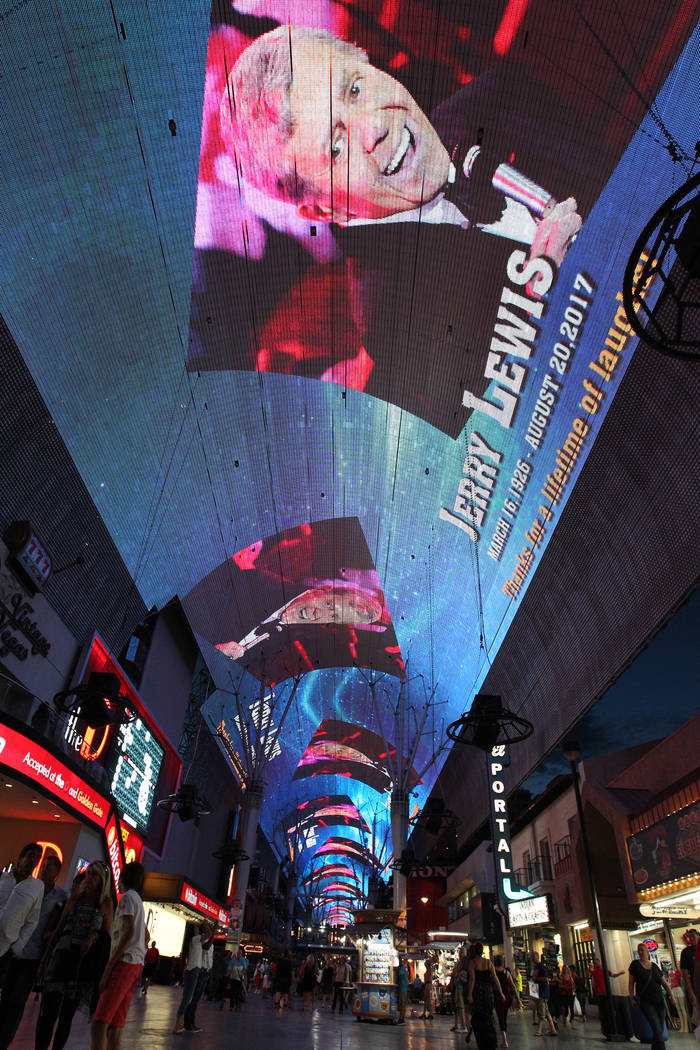 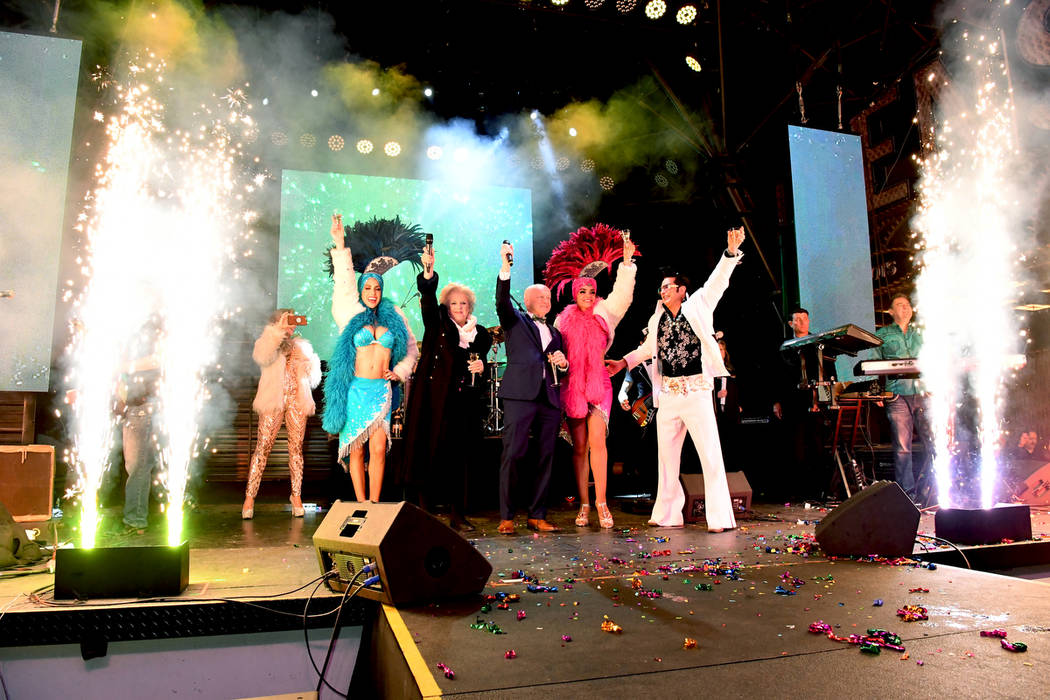 Every day, the shadows of riders on the SlotZilla zip line whiz past the windows of Patrick Hughes’ office at the Fremont Street Experience in downtown Las Vegas.

Those soaring silhouettes seem to be choreographed as Hughes, the FSE president, talks of how the canopy’s $32.8 million overhaul came to be. Turns out that SlotZilla, which runs two zip lines high above Fremont Street, is more than a thrill ride.

It’s also a cash machine, important in the complex network that is paying for the new FSE light show.

“We had to recreate the successful public-private partnership that built the canopy in the first place,” says Hughes, referring to the original construction of the light show above Fremont Street in December 1995. “We have the LVCA, whose purpose is to drive visitation and is fueled by hotel-tax revenues. We have the city of Las Vegas, which owns the structure. And, we have the private casino owners and the Fremont Street Experience Board of Directors, who are paying more than $12 million.

“And that money is primary from SlotZilla. The zip line is integral to the future of the Fremont Street Experience.”

More than 22 million visitors descend on Fremont Street each year, and they are not just making the trip to check out the guy slamming paint drums on Circle 18. The light show is a major entertainment vehicle, but it’s as outdated as the reality show “The Casino” — which was shown on the big screen the night its most recent overhaul debuted in 2014.

“Fremont Street is a destination within the destination of Las Vegas,” Hughes says. “We have to remain aware of that, and to give tourists a reason to want to come back to Las Vegas. The canopy, right now, doesn’t do that.”

For the uninitiated, the Fremont Street Experience is the name of the downtown promenade and also of the partnership of hotels on Fremont Street. FSE is operated similar to a homeowners association, composed of the D Las Vegas, Four Queens, California Hotel, Golden Gate, Golden Nugget, Fremont, Binion’s and Main Street Station.

Those operators combined to build SlotZilla in November 2014. Profits (pretty obviously) are not used to improve SlotZilla; they are to pay for a fantastic new light show opening on New Year’s Eve 2019.

“This is much more than just brighter lights, a hell of a lot more than that,” Hughes says. ‘When I am looking at the canopy, I’m seeing a one-dimensional experience. When you have the largest LED screen in the world, you have to be more than that. People want it to be current, they want to interact with it.”

The new show will be quadruple the current resolution and up to eight times as bright. The show will have a “sleep period,” likely from 4 a.m.-8 a.m. daily. Audio-visual entertainment from such bands as Imagine Dragons, The Killers, The Who and even EDM superstar Tiesto will continue. But the images will expand to more natural landscapes.

“In the morning, we’ll have the sun rising over a beach with the ocean and the waves coming in,” Hughes says. “Then we’ll see another sunrise, where you’ll be flying through as if you’re a bird crossing a beach, then an island. Right now, you can only look at the canopy when it is dark.”

Construction begins in April, with testing ready by Dec. 19, 2019. The canopy stretches 1,500 feet with eight sections, each of which will be replaced in overnight sessions. “We’ll turn on a new section, then go to the next,” Hughes says. “But you’ll see the older content on the new screens, so you won’t know how brilliant it will be until we have it fully installed with new content.”

Key to the new experience will be The Key — an app for visitors to interact with the display as they meander along Fremont Street.

“The Key will be the conduit to the canopy,” Hughes says. “You can vote on the next show in 10 minutes. You can order a message to play on the LED — you can say, ‘Look up!’ And it will say, ‘I want a divorce!’ “

That’s Hughes’ effective, if curiously cynical, example. But expect many marriage proposals, anniversary messages, and happy birthday greetings at the new Viva Vision. Visitors can vote on the next music performance, and The Key screen will light up in sync with the performance. It’ll be a whole thing.

Hughes recalls walking Fremont Street with a pre-scandal Steve Wynn a couple of years ago, when Wynn was famously strapped into SlotZilla for a ride and a photo op. During that visit, Wynn explained to Hughes some of the concepts that were discussed and dismissed about how to improve Fremont Street when he owned Golden Nugget.

“We talked about the ideas that were floated about what to do with Fremont Street, and one of them was to have gondolas on a river, right down Fremont Street, which would have been filled with water,” Hughes says of the concept that was ultimately captured at The Venetian. “There were flying gondolas, an idea that became Masquerade in the Sky at the Rio. Another idea was to bring the Starship Enterprise and — poof! — that went away.

“But developing the canopy, this worked. And when we finish, we’re going to have a party like no other.”