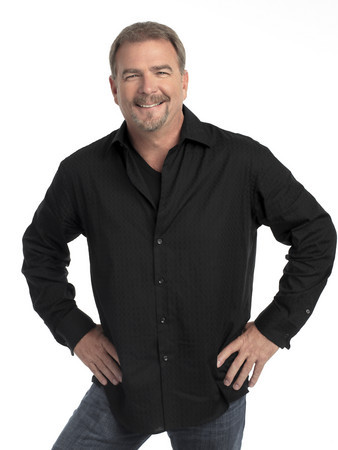 Bill Engvall has spent 11 Decembers in Las Vegas for the National Finals Rodeo. To him, one image sums up the strange confluence of cowboys and casinos.

When he worked the bygone Stardust, "During the rodeo they would book a cross-dressing convention, which to me was unbelievably brilliant.

Somehow it all works. Rodeo week on the Strip now offers a familiar mix of country singers and perennial comedians such as Ron White (today, Saturday and Dec. 11-12, The Mirage), Rodney Carrington (today-Dec. 12, MGM Grand) and Larry the Cable Guy (Dec. 12, Mandalay Bay).

Most of the comedians no longer wait a year for return bookings. "I never want my show to be pigeonholed into, ‘Oh, he can only work when it’s cowboys in town.’ Then you really limit yourself," says Engvall, who is on the "Mystere" stage at Treasure Island today, Thursday and Dec. 11.

"While I do have a lot of country roots and still love the music, I enjoy going to a blues bar. I don’t ever want to limit myself to the boot-and-buckle crowd."

Engvall’s latest stand-up special, "Aged and Confused," recently debuted on Comedy Central. The 52-year-old allows his material to age in real time, so he’s talking of late about being an empty nester. The new jokes are more "the way I used to write before I had kids; not all just about family and the kids."

"I’m becoming that grouchy old, ‘Get off my yard’ guy."

No attitudes will be tolerated during rodeo week. Nightly NFR competition is a tight ticket at the Thomas & Mack Center, but the major music options are highlighted below (See the Showguide listings for times and prices). "It’s like going to Indianapolis for the 500. You’re not really going to the race, you’re going there for all the parties. It’s a destination in December," Engvall says.

"You got your hard-core rodeo fans that are going to go every night. And then you’ve got your majority of people who, I think, for the first time in their life have on Wranglers and boots. It’s their chance to cut loose and have a good time, and that’s why we’re there."

• Trace Adkins: The guy’s so popular, he has two hits on the country charts and his own comic book, "Luke McBain." Adkins sidesteps his national tour with Martina McBride for a night out on his own. (Wednesday, Palms)

• Dierks Bentley: It’s been a chart-topping, "Feel That Fire" year for the country hunk who doesn’t wear a hat and rides a motorcycle more often than a horse. (Thursday and Dec. 11, House of Blues at Mandalay Bay)

• Brooks & Dunn: The boot-scootin’ duo is threatening to call it quits after 20 years, but this weekend’s dates likely won’t be their last in Las Vegas. With a farewell tour booked well into the summer, we sense an Eagles-like hesitation to say goodbye. (Today-Sunday, Las Vegas Hilton)

• Willie Nelson, Asleep at the Wheel: The Texas golf buddies team up as they did earlier this year on the album "Willie and the Wheel." (Saturday, Planet Hollywood)

• Ray Price: The 83-year-old pioneer of the "countrypolitan" sound is the first to admit, "I don’t fit into the modern country but I got enough fans I don’t have to," he says. "My fans are older people. They enjoy the good songs and everything. They’re not into the wild rock and jumpin’ shoutin’ type things." (Today, Boulder Station)

• Clay Walker: The NFR regular rides back into town on the heels of "She Won’t Be Lonely Long," his first single in two years. (Today and Saturday, Golden Nugget)