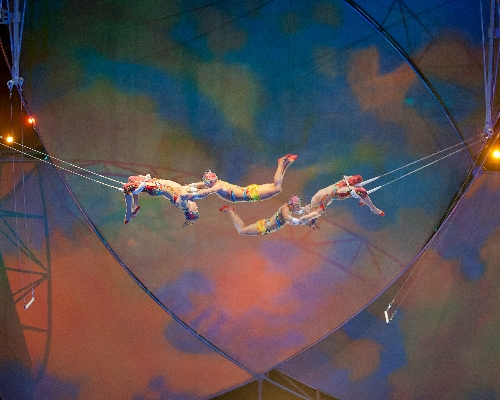 Cirque du Soleil will be making a push to advertise what’s new about “Mystere,” but the show’s real strengths are still the things that aren’t.

When Cirque had to close “Zed” in Japan last year, it made room for two of the acts to land in “Mystere,” the oldest of the company’s seven Las Vegas titles — and coincidentally, one that now has a separate landlord at Treasure Island, which is not concerned with the inter-casino priorities of MGM Mirage.

But the new acts don’t really come off so new. How much you will be impressed, or really even notice, is a matter of nuance.

In the first, a female soloist, Ginger Ana Griep-Ruiz, takes flight entwined in long swaths of silk fabric. The basic premise is seen all over town in various shows and nightclubs. But this is Cirque, so she does it at higher altitude, falls farther before catching herself and swings way out over the first rows of the audience.

Her music, too, is classic Cirque counterpoint: subdued classical guitar and airy vocalizations from the two female singers.

The other change is a new team performing the closing trapeze act, which was always the weakest link of “Mystere.” It’s physically distanced from most of the audience, and perhaps just too conventional and old-school to fall so late in a parade of wonders supporting the company’s original premise, “circus reinvented.”

The new troupe uses more compact rigging, but still performs at the very rear of the stage. If you know your trapeze, you may appreciate that more of the catches are made by people hanging upside down from the bar, or that performers such as Ricardo Galvis flip as they fly to the opposite bar.

If the changes alone don’t add up to a marketing campaign, the show as a whole never disappoints. With 18 years, more than 8,630 shows and 13 million customers under its belt, “Mystere” still reflects the purity of a company that genuinely surprised and delighted us in the early ’90s. There were enough original ideas to go around before six more titles brought the need for high-concept brand ventures such as Michael Jackson songs.

“There are still a lot of people that say it’s their favorite show,” Cirque’s president and CEO, Daniel Lamarre, said before Saturday ‘s show. Lamarre said he likes to play a game with cabdrivers, asking them their favorite show. “Mystere” is “often mentioned.”

Backing up to see the forest through the pastel leotards, one thing comes into focus upon a repeat viewing: “Mystere” is the funniest Cirque on the Strip.

And it wasn’t supposed to have recognizable stars, but now it’s hard to imagine the show without two individuals.

Brian Dewhurst, its unstoppable 78-year-old funnyman and the show’s MVP, literally makes contact with the audience: dumping popcorn on our heads, dragging one of us to the stage to be locked in a box, and knocking a little of the wind out of the etherealness of it all.

A prototypical Cirque character with red bowler hat and bizarre puppet (Marek Haczkiewicz) delivers the announcements at the beginning. When Dewhurst gets the best of him later, he announces in a flourish of Marx Brothers anarchy, “You can smoke now if you want!”

Then there’s Francois Dupuis, who created the “big baby” character and has been finding his Mama or Papa up front for all 18 years. Chances are your children’s memories of this show involve these two guys as much as Paul Bowler, the dude who goes airborne with a big cube.

“Mystere” takes its time with the comedy between acrobatic sequences, and nearly all of the bits somehow involve the audience, even when a pole-climbing acrobat strays off to flirt with a front-row patron. It’s a direct interaction. You don’t see golf carts driving through the audience in the theatrical “Ka” and “Love.”

The acrobatics also shine on their own without the need for context (though if you look for it, there are themes of birth and innocence, and society’s need for ritual — pomp versus circumstance — floating around in there). Flying off a teeter board to a triple-stacked landing, or shimmying up a pole upside down speaks for itself.

If anything about the show seems dated, it’s the new age-ier stretches of the music and some of the costumes by Dominique Lemieux, which have worn into self-parody over the years as Cirque’s surprise attack faded into the Las Vegas norm. Pastel was so ’90s.

Perhaps something to take a look at for the 20th anniversary? With Lamarre confirming Treasure Island’s continued investment and support, it’s just around the corner.