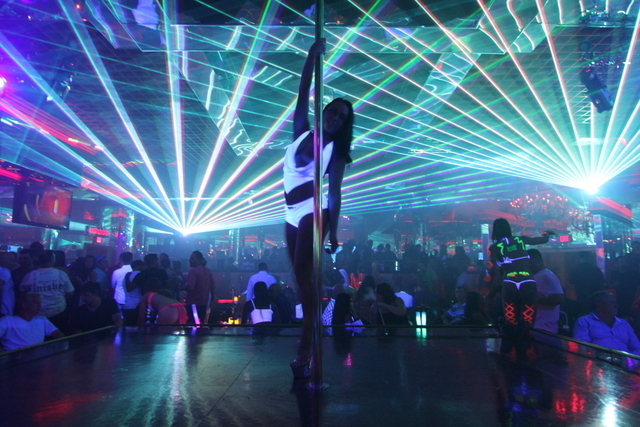 Electric Daisy Carnival is going down here next weekend in Vegas.

This obviously isn’t news, unless, of course, you’re just joining us from the outter reaches of Alderaan — in which case, welcome, welcome! So much to catch up on: Marge and Homer are dunzo; perpetually naked, Hannah Montana is ever controversial (see new issue of Paper)…and, oh, so much more, but, alas, we’ll save that for another day.

Sorry. Getting all sorts of tangential here. Where were we? Ah, yes, EDC. Vegas.

So, yeah, the EDM extravaganza kicks off here next week, and everybody in town seems to making an effort to catch a ride on its coattails. And to be clear, by “everybody,” we literally do mean everybody. Even the pre-parties have pre-parties. Gotta EDC-eize the day well you can, am I right?

Count the folks at the world famous Crazy Horse III as the latest entity to get in on the action, because nothing says dance music quite like a collection of scantily clad individuals dancing until dawn with a DJ providing a pulsating soundtrack…wait, come to think of it, that’s actually a rather perfect pairing. Nice work!

But while this particular gentlemen’s club isn’t likely to draw attention away from another local establishment who’s making headlines auditioning members from the Class of 2015, you have to give kudos to Crazy Horse for the congruity.

Crazy Horse III (3525 W Russell Rd.) has plans to celebrate EDC all week with surprise guest DJs on hand every night, in addition to an appearance by Breathe Carolina on Saturday, June 20.

There’s no cover for the weeklong fiesta, provided you take advantage of the club’s car service, which is complimentary and can be caught anywhere on the Strip with a call to 702-673-1700. Otherwise, the admission is $44 per person if you arrive in a taxi, or a two drink minimum otherwise. Should be all kinds of crazy, y’all.

Keep an eye on this space for all things EDC, before and after the event — after all, Crazy Horse III isn’t the only outfit making the most of the exposure here.