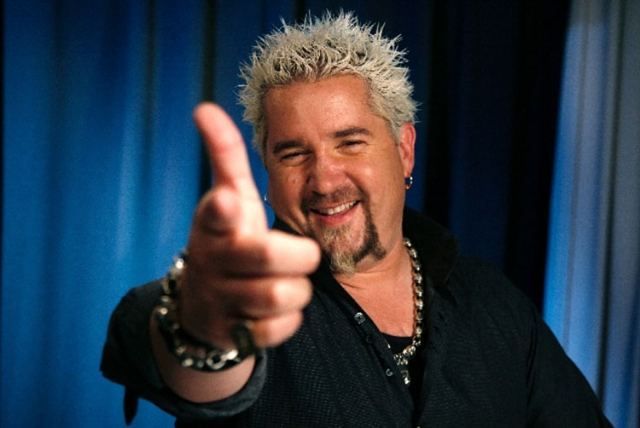 Food Network star Guy Fieri was back on campus Thursday at UNLV, where it all began, to enroll a son with aspirations of following in his dad’s footsteps.

Fieri was giving his son Hunter a tour of the campus when he recognized his dormitory, Tonopah Hall, where he lived in the late 1980s.

He found the dorm room door open, but instead of walking into a time capsule of his college days, he found the space is now a store room.

He ran into some resident assistants who recognized Fieri, who has hosted “Diners, Drive-Ins and Dives” since 2007.

He shared a story from his dorm days.

“I would climb out the window and set up a barbecue. I was this little, long-haired kid. Food was my core even then,” he said.

“After a while, people smelled it and said, ‘If I brought some chicken over, would you cook it?’ “

While the food was grilling, “I’d hang my speakers out the window, and we’d play Frisbee in the parking lot,” he said.

At the Student Union, he would watch in awe when members of the basketball team — future NCAA champs Larry Johnson, Stacey Augmon and Anderson Hunt — walked past.

Fieri, 47, is one proud papa that his oldest son is following him to UNLV.

“When we started talking about college, I didn’t want to push my thing,” Fieri said. “It came down to UNLV and Arizona.”

Fieri said he held his breath when Hunter flew to Tucson, Ariz., to check it out earlier this year.

“I was at a party at my (Las Vegas) restaurant (Guy Fieri’s Vegas Kitchen & Bar at The Linq) and he called me,” Fieri said. “He Facetimed me and made the announcement. To me it was like the NFL draft.”

The day after Hunter graduated from Sonoma Academy in June, he was jetting off to Europe for a monthlong grand food adventure with his dad and a Food Network film crew.

“We did seven countries, 14 cities. He milked sheep in Crete, fished for lobster off the coast of Greece, made Parmesan cheese in Italy, croissants in Paris and pretzels in Germany.

“It’s going to air on the Food Network this fall,” Fieri said.

They met Fieri’s wife and other son, Ryder, 9, in Spain and flew to Majorca, where Hunter learned how to cook paella.

Fieri was an exchange student in France at age 16. He came back bitten by the food bug.

He’s hopeful Hunter has the same life-changing experience his dad had at the William F. Harrah College of Hotel Administration.

“If you want a position in this industry, UNLV is such a portal,” Fieri said.

Playboy whiffs on this one

Playboy magazine has come up its rankings for America’s 25 Sexiest Cities, and one word comes to mind: lame.

Any sexy-city list that has Las Vegas ranked eighth smacks of a rigged scoring format.

New York ranks No. 1, according to Playboy, based on two separate polls that weighed metrics, including nightclub, general lifestyle habits and “an undercurrent of desire.”

In other words, as we suspected, highly scientific.

New Yorkers scored high in the “kinky” department and frequency of sex, averaging 138 times a year, according to Playboy.

If that’s not impressive enough, the Big Apple has a Museum of Sex and a topless book club.

Finishing behind No. 6 Boston is deflating, to say the least. While Las Vegas offers some of the sexiest shows in the world and other adult options, Boston leads the Western world in gas buildup and Beano sales, thanks to its beloved baked beans.

And I gotta ask: How could No. 7 Seattle, the city of cold showers for weeks on end, rank ahead of Las Vegas in sexy vibe.

UNLV’s new football coach, Tony Sanchez, knows how to break up the rigors of preseason workouts. He was spotted marching his entire roster of 125 into the Hofbrauhaus for lunch Wednesday. Nothing like escaping 110-degree heat in the air-conditioned comfort of a beer hall known for its icy steins of ale. Except the burgers and chicken sandwiches were accompanied with glasses of tap water. “Coach Sanchez said he wanted to be a good neighbor,” said Tony Sinzger, managing partner of the Hofbrauhaus. …

Rehan Choudry, founder of the Life Is Beautiful festival, welcomes the incoming freshman class at UNLV today. They are in for a surprise.

“Donald Trump is the grandson of German immigrants. Don’t worry. The last time a German guy with crazy hair took over a country, everything turned out fine.” — Conan O’Brien

Norm Clarke’s column appears Sunday, Monday, Wednesday and Friday. He can be reached at 702-383-0244 or norm@reviewjournal.com. Find more online at www.normclarke.com. On Twitter: @Norm_Clarke.