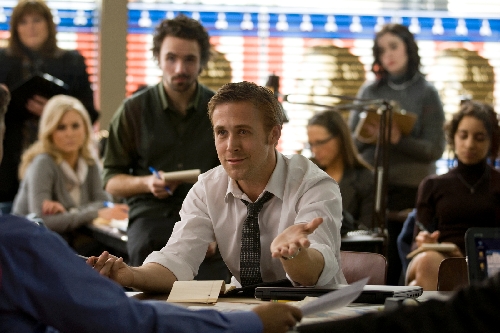 A look at some of the DVDs, CDs and books hitting stores this week.

“Ides of March” (R): On the eve of a key presidential primary, an idealistic campaign operative (Ryan Gosling) learns about loyalty and betrayal from his charismatic candidate (co-writer/director George Clooney), his campaign boss (Philip Seymour Hoffman) and a rival (Paul Giamatti).

Turning to movies that never played local theaters, an on-the-run ’80s teen (Juno Temple) finds herself through a friendship with a fellow outcast in “Dirty Girl” (R). And a young Irish rocker (Ben Barnes, “The Chronicles of Narnia’s” Prince Caspian) watches his school pals form a band — and live his dream as U2 — in “Killing Bono” (R).

Guided by Voices, “Let’s Go Eat the Factory”: Frontman Robert Pollard pounds lots of brews and emits pop nuggets with the ease and frequency of his beer belches.

His band’s latest disc is the first to feature GBV’s “classic” mid-’90s lineup in 16 years.

But while the group’s membership has changed, once again, the GBV aesthetic certainly hasn’t: This is more terrific, off-the-cuff rock ‘n’ roll as smooth and tasty as its Miller Lite muse.

Also in stores: Steve Aoki, “Wonderland”; Attack Attack!, “This Means War”; The Big Pink, “Future This”; Biohazard, “Reborn in Defiance”; Ani DiFranco, “Which Side Are You On?”; Juvenile, “Rejuvenation”; and Leona Lewis, “Hurt: The EP.”

“Death of Kings” by Bernard Cornwell: With Alfred the Great on his deathbed, the pagan, Saxon-born Uhtred must decide whether to continue fighting for the king’s cause of a united England in the sixth installment of the Saxon Tales.

In another series continuation, lawman Raylan Givens combats illegal organ harvesters, along with other crooks, in Elmore Leonard’s “Raylan.”

Also hitting shelves this week: “All Necessary Force” by Brad Taylor; “Ameritopia” by Mark R. Levin; “The Chalk Girl” by Carol O’Connell; “Fracture” by Megan Miranda; “Gone West” by Carola Dunn; “Hallowed” by Cynthia Hand; “The Look of Love” by Mary Jane Clark; “A Nation of Moochers: America’s Addiction to Getting Something for Nothing” by Charles J. Sykes; “The Real Romney” by Michael Kranish; “Reefs and Shoals” by Dewey Lambdin; “The Rope” by Nevada Barr; “Shadows in Flight” by Orson Scott Card; and “Tempest” by Julie Cross.