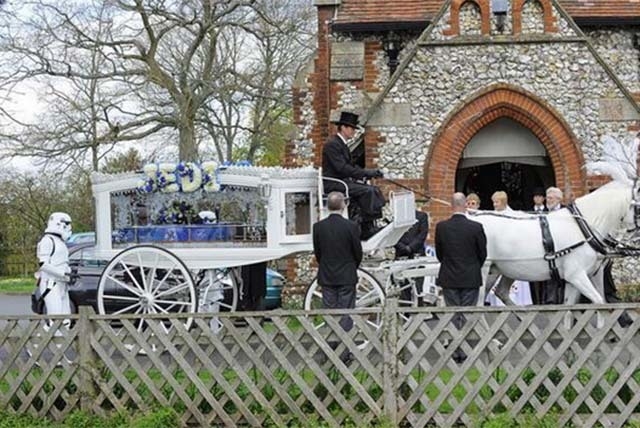 A band of Stormtroopers escort the casket of 4-year-old Jack Robinson during a Star Wars themed funeral procession. (Courtesy Twitter)

The memory of 4-year-old Jack Robinson lives on through the Force, despite losing his final battle to a cancerous tumor.

Marie and Terence Robinson of Denmead, England, lost their young son on April 1, according to the Portsmouth News. Despite their grief, Jack’s parents, three sisters and identical twin brother managed to fulfill the child’s dying wish: a Star Wars-themed funeral.

The young Jedi’s passion for sci-fi and geek culture carried on as they arranged for a horse-drawn carriage, guarded by Stormtroopers, to carry the Star Wars coffin in an Imperial march to the funeral service. A brass band played Star Wars music when they arrived at the church.

Robinson’s departure and unyielding zest for George Lucas’ world has sent a spark throughout the Star Wars fandom, causing Cinema Blend, a website based in film entertainment, to pick up the story.

“If nothing else, this story is a reminder of how much joy a great movie can bring to people’s lives. This little kid’s interests touched a lot wider than Star Wars,” Cinema Blend’s Mark Rawden reports. “The movie was far from the only thing in his life. He had loving parents, loving siblings and an entire community willing to mourn for him, but in Star Wars, he found a heck of a lot of fun. As such, I can’t think of any better way he could have gone out.”