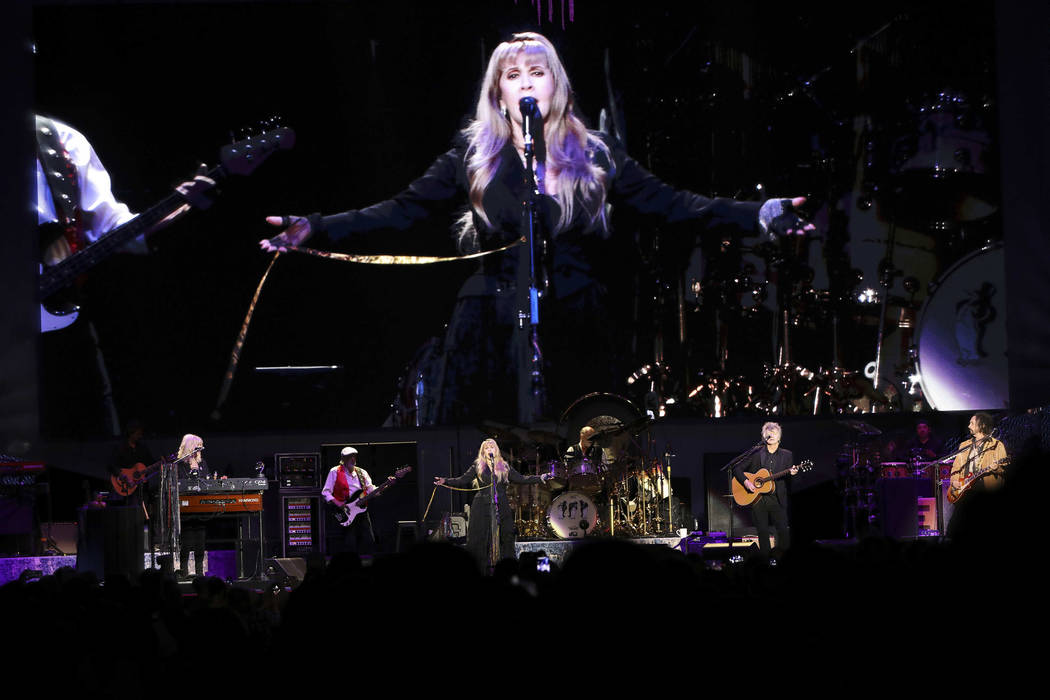 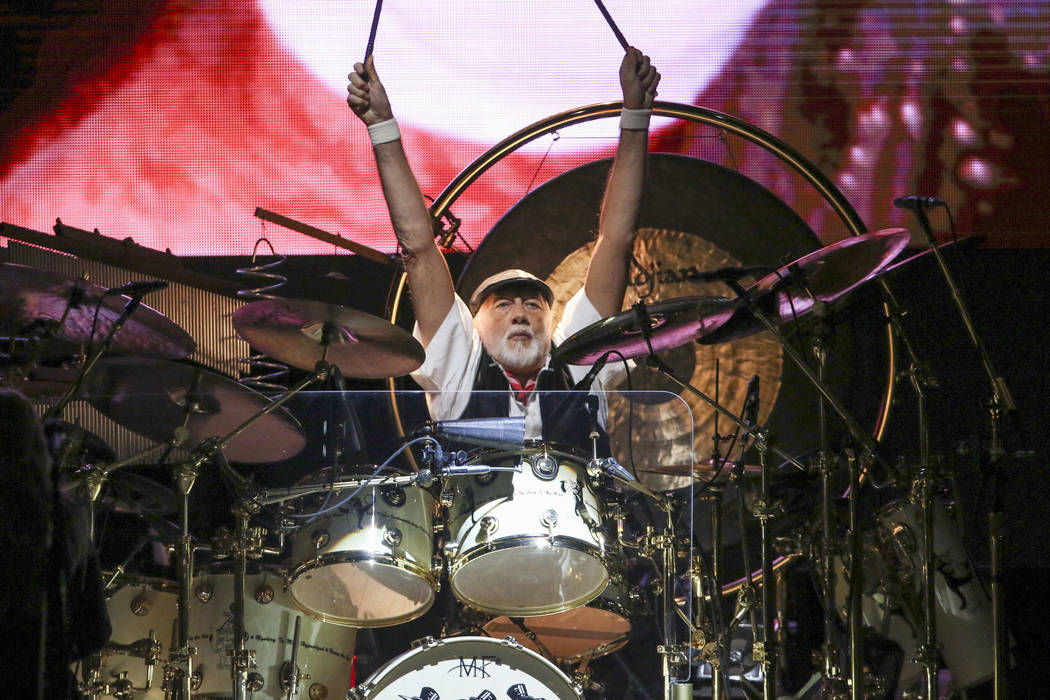 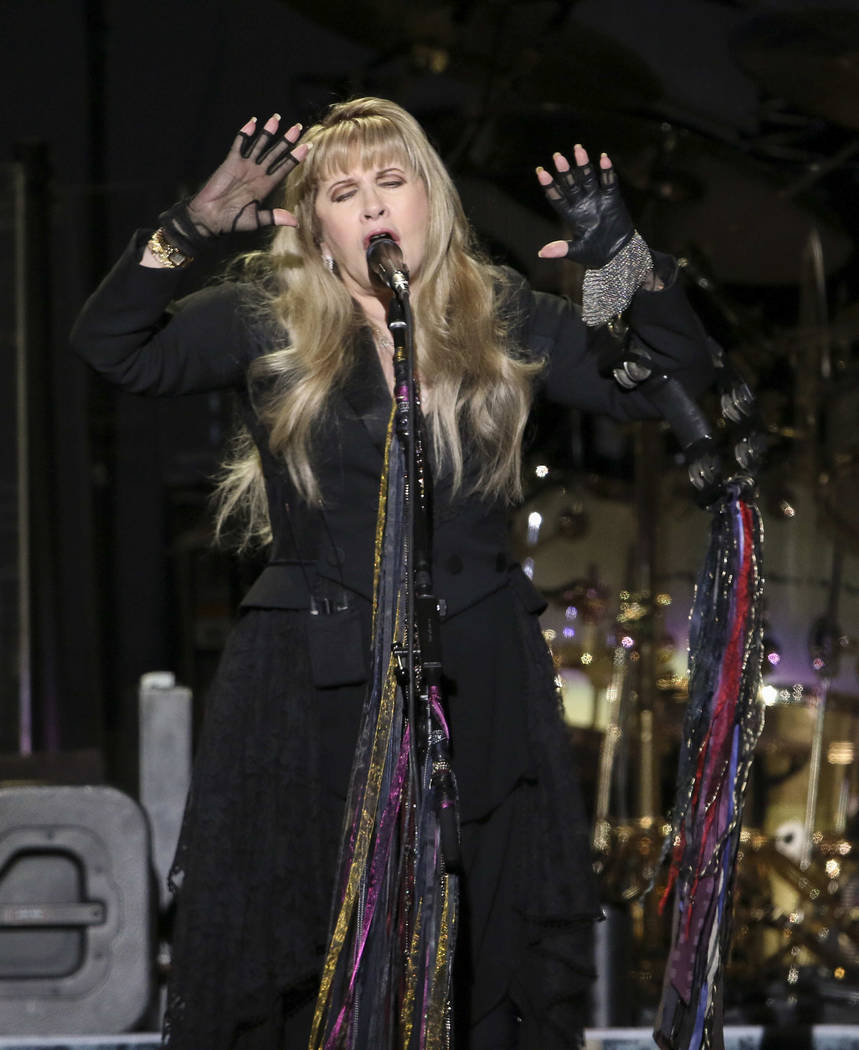 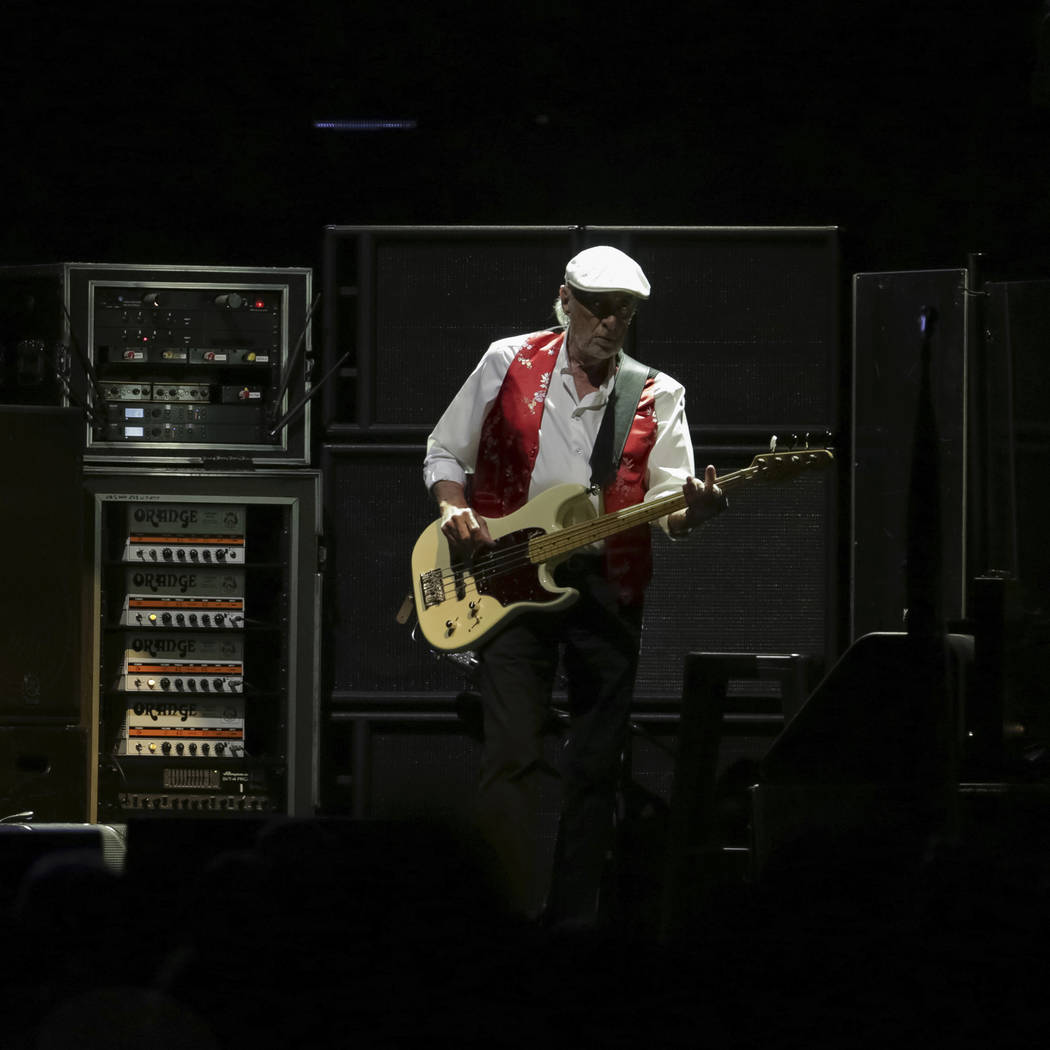 Bassist John McVie performs onstage with Fleetwood Mac at the Capital One Arena on Tuesday, March 5, 2019, in Washington. (Photo by Brent N. Clarke/Invision/AP) 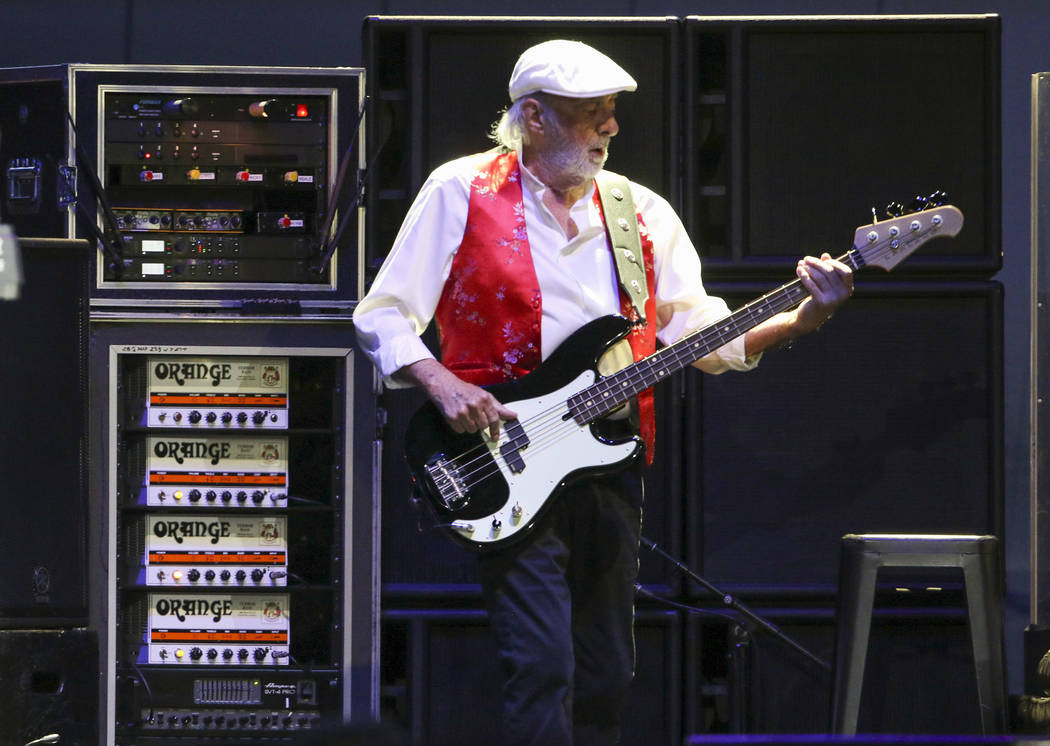 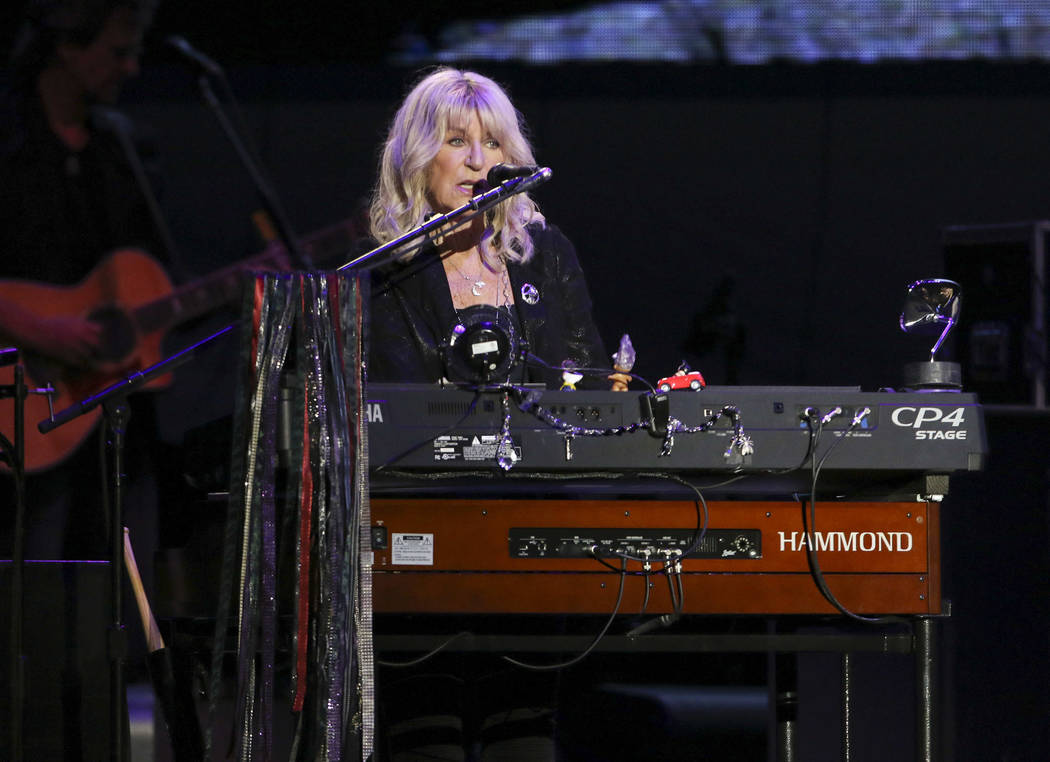 The faces are different, the box office the same.

For the first time since 1994, Rock & Roll Hall of Famers have hit the road without singer-guitarist Lindsey Buckingham, who was ousted by the rest of the band in April 2018.

Yet Fleetwood Mac continues to do blockbuster business: Its current four-leg, 88-date tour is expected to gross well over $100 million.

Now the trek is coming to an end in Las Vegas, a year after Fleetwood Mac drew more than 15,000 fans to T-Mobile Arena for $2.3 million in ticket sales. The band plays at 8 p.m. on Saturday at T-Mobile.

Before they go their own way, though, you’ve got one more chance to catch the show, which features more than a few surprises in terms of song selection.

Let’s take a look at the five biggest set-list twists of Fleetwood Mac’s “An Evening With” tour.

(Spoiler alert: Read no farther if you don’t want to be tipped off to a number of the songs the band will probably be playing).

You know Lindsey Buckingham’s shoes are big to fill when it takes two pairs of feet to do so.

Finn first made a name for himself with New Wavers Split Enz, who were founded by his brother Tim Finn in 1973. When that group broke up about a decade later, Finn launched jangle-pop mainstays Crowded House.

Mac’s current set list gives a nod to both groups, acknowledging Split Enz with the band’s lone No. 1 single, the brooding yet buoyant “I Got You,” a Neil Finn-penned tune that topped the charts in New Zealand and Australia.

Meanwhile, Crowded House gets its due with sweeping ballad “Don’t Dream It’s Over,” the band’s biggest hit, which reached No. 2 in the U.S. in ’87.

Turns out that dream isn’t over just yet.

‘Tell Me All the Things You Do/Hypnotized’

Speaking of Finn, the Mac is making sure he has plenty of dirt beneath his fingernails by digging deep into the band’s past and giving voice to a pair of album cuts that Fleetwood Mac hadn’t played on tour in 42 years.

Both could be seen as homages of sorts to a pair of late, former Fleetwood Mac band members.

First up is “Tell Me All the Things You Do,” a brick-hard blues rocker from 1970’s “Kiln House.” Featuring some wrist-spraining guitar peacockery, the song was written and originally sung by Danny Kirwan, who played with the band from 1968 to ’72 and died in June 2018.

Then there’s “Hypnotized,” a beatific gem from 1973’s “Mystery to Me.” It’s one of the best tunes penned by former Fleetwood Mac singer Bob Welch, who passed away in 2012. Initially released as the B-side to “For Your Love,” it’s every bit as entrancing as its title suggests.

Their connections are as deep as their respective discographies.

Tom Petty and Fleetwood Mac had plenty in common aside from the fact that Campbell is now in the band.

As he recounts in the recent documentary “Echo in the Canyon,” which examines the impact of L.A.’s Laurel Canyon music scene of the 1960s and ’70s, Petty was enamored by that rich artistic community, which Fleetwood Mac eventually became a part of.

Petty would later return the favor, to Stevie Nicks in particular.

When she left Fleetwood Mac to launch her solo career in the early ’80s, she did so by recruiting the Heartbreakers to back her, with her first single being the Petty-penned hit “Stop Dragging My Heart Around.”

When Fleetwood Mac launched this tour in Tulsa, Oklahoma, on Oct. 3, 2018 — a year and a day after Petty’s death — the group encored with one of his more iconic tunes, “Free Fallin’. ”

It has remained in the set: a friend gone but his music alive.

Speaking of covers, this is a Santana signature, right?

But it was written by Fleetwood Mac’s Peter Green and released as a single two years prior to that, first appearing on the band’s 1969 compilation album “English Rose.”

Now, for the first time since 1987, Fleetwood Mac is performing it again with Nicks on lead vocals.

Maybe with a little (black) magic, Vegas resident Santana will join them onstage.

Time to “Tango in the Night” once more.

Released as the final single from said album in 1988, this underrated Christine McVie chestnut hasn’t been a regular part of the band’s live set since 1990, back when Steve Nicks’ coif was almost as big as her hits.

One of McVie’s hardest-driving tunes, “Midnight” comes in the homestretch of the band’s current set list, where it should register like a fistful of NoDoz, a welcome shot of energy to get crowds back on their feet following a pair of ballads.

“Do you remember?” McVie asks on the song’s full-throated chorus.

How could we forget?