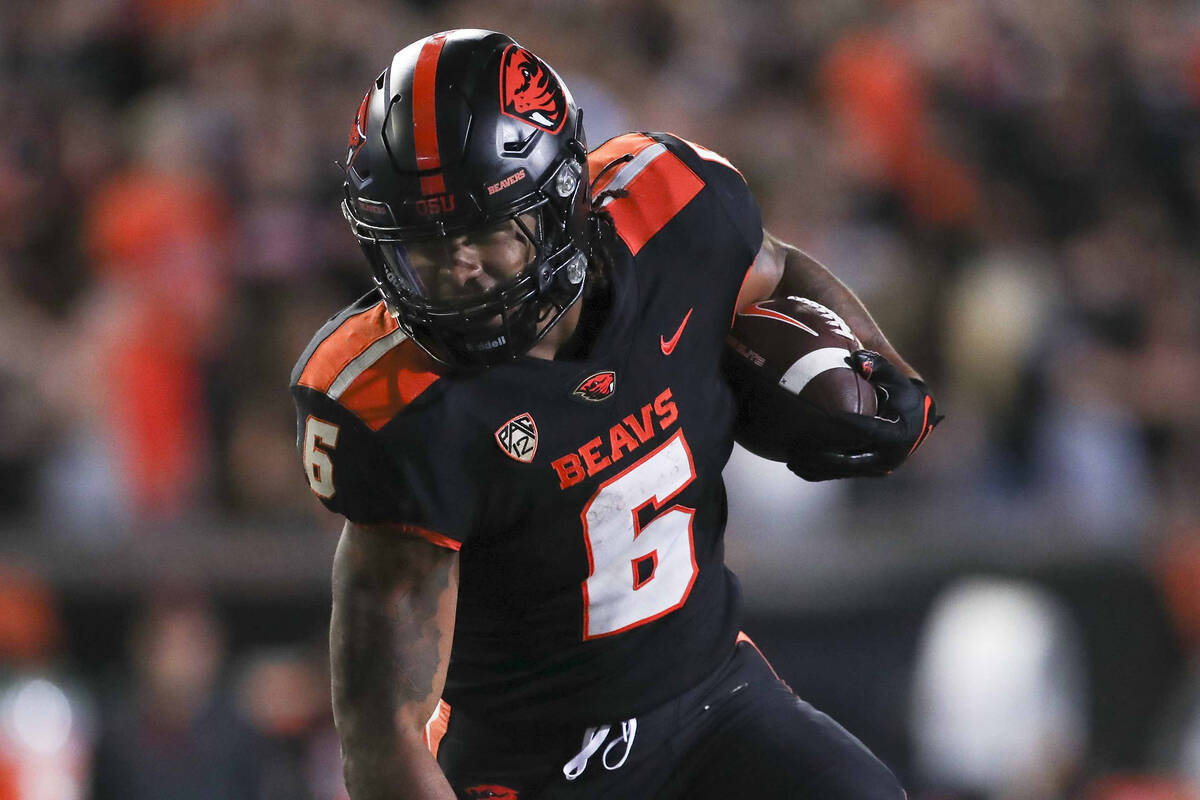 The Las Vegas Bowl has the distinction of being the first scheduled bowl matchup between the SEC and the Pac-12 in 33 years. The Oregon State Beavers (9-3) will take on the Florida Gators (6-6) at Allegiant Stadium. It’s an early start time, 11:30 a.m. Saturday, thanks to the Raiders-Patriots game being bounced out of the “Sunday Night Football” slot and the time it takes to prepare the stadium. Tickets start at $40; ticketmaster.com.

On Wednesday, you might want to head to Pinkbox Doughnuts to pick up some pink plops (or other confections of choice). Doughnut orders that day will feature hidden tickets with prizes, including two awards of $5,000. All Pinkbox locations are participating except for Allegiant Stadium. The giveaways celebrate the local bakery’s 10th anniversary.

As timeless as a black leather jacket, which they’ve long come clad in, SoCal’s Social Distortion have evolved from punk forebears to punk-informed roots rockers since getting started back in 1978. Frontman Mike Ness’ voice still sounds like the product of 10,000 cigarettes and just as many lonely nights. It’s just set against a more Americana-leaning backdrop these days. See them at 7:30 p.m. Friday and Saturday at the House of Blues at Mandalay Bay. Tickets start at $39.50; ticketmaster.com.

OK, so plenty of country dudes are metalheads at heart, but it’s exceedingly rare for country and metal acts to actually hit the road together. That changes when Las Vegas metallers Five Finger Death Punch team up with rough-and-tumble country singer Brantley Gilbert. They may have their differences, musically speaking, but here’s one thing they have in common: No one on stage will be wearing sleeves when the two team up at 6:30 p.m. Saturday at Michelob Ultra Arena at Mandalay Bay. Tickets start at $56; ticketmaster.com.

Anyone who happened to catch rock ’n’ roll peacocks Måneskin when they opened for the Rolling Stones at Allegiant Stadium in November 2021 knows this bunch is certainly at home on big stages in even bigger moments. And understandably so: The coed Italian glamsters are superstars in Europe, even if they’re just starting to break out here. To wit: They’re up for best new artist at the 2023 Grammy Awards. Feel the flamboyance at 8:30 p.m. Friday at The Theater at Virgin Hotels Las Vegas. Tickets start at $39; axs.com.

In September, the Vegas music community lost one of its most beloved members, Blair Dewane, best known as the affable, always entertaining frontman for indie rockers Rusty Maples and The Skooners. In honor of his passing, said community will celebrate his life with Blairfest, featuring Ian Dewane and Friends paying tribute to Blair’s catalog alongside Same Sex Mary, Black Camaro, Dusty Sunshine, Mercy Music, Hassan Hamilton and many others at 7 p.m. Friday and Saturday at The Sand Dollar Downtown and the Showroom at the Plaza. Free; plazahotelcasino.com.

We’re running out of fingers on which to count the valley’s professional sports teams. The most recent addition, the National Lacrosse League’s expansion Las Vegas Desert Dogs, will make their home debut against Panther City Lacrosse Club. It’s the first of nine home games in their inaugural season. See it at 7:30 p.m. Friday at Michelob Ultra Arena. Tickets start at $25; axs.com.

Peppa Pig is heading out on a holiday camping trip with her little brother, George, and friends Pedro Pony, Suzy Sheep and Gerald Giraffe in “Peppa Pig’s Adventure.” The live musical experience promises singing, dancing, games and surprises. See it at 2 and 6 p.m. Dec. 22 in the Orleans Showroom. Tickets start at $35; ticketmaster.com.

As its one-year anniversary approaches, Carversteak in Resorts World is offering a Local Appreciation Menu through December. The menu features welcome cocktail, choice of Caesar salad or French onion soup, choice of wet-aged strip loin or seasonal salmon, and choice of warm cookies or crème brûlée for dessert. Menu served from 5 to 7 p.m. Mondays through Thursdays. Cost: $95 plus tax and gratuity.