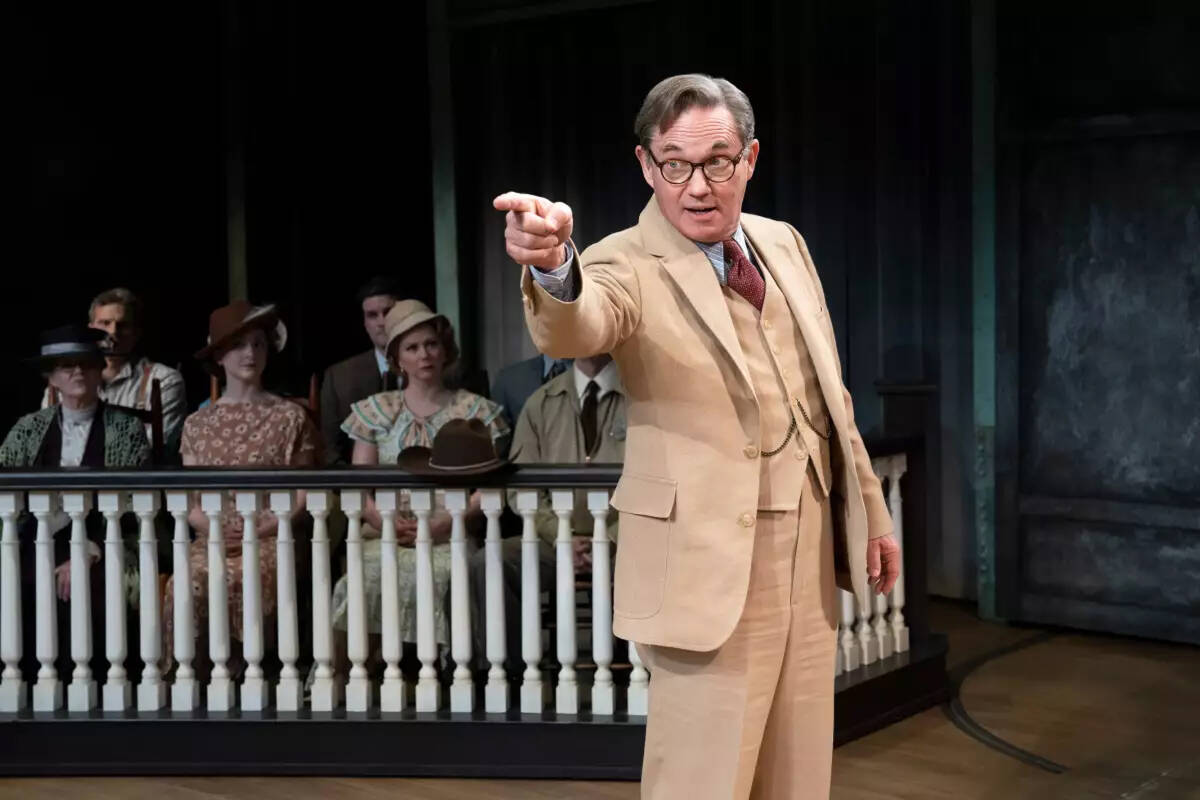 Richard Thomas as Atticus Finch in a courtroom scene from Aaron Sorkin's stage adaptation of "To Kill a Mockingbird." (Julieta Cervantes)

‘To Kill a Mockingbird’

Writer Aaron Sorkin’s adaptation of Harper Lee’s classic novel “To Kill a Mockingbird” took Broadway by storm in the days before COVID-19. On its first national tour, Richard Thomas stars as Atticus Finch, the attorney defending the life of a falsely accused Black man in 1930s Alabama. See it at 7:30 p.m. Tuesday through Jan. 15, with additional shows at 2 p.m. Jan. 14-15, in Reynolds Hall at The Smith Center. Tickets start at $40; thesmithcenter.com.

Comedian Sebastian Maniscalco has turned irritation into an art form, and the man is the Picasso of pet peeves. Sure, at times he may come off as a grumpy old man sans the old man part, but he’s coming from an honest, helpful place: He just wants you to dress a little better at the airport, you know? See Maniscalco at 7 and 10 p.m. Friday and Saturday at the Encore Theater at Wynn Las Vegas. Tickets start at $55; ticketmaster.com.

‘Bugs Bunny at the Symphony’

There’s a very good chance you were introduced to classical music via Bugs Bunny and cartoons such as “What’s Opera, Doc?,” “The Rabbit of Seville” and “Corny Concerto.” Those shorts and more than a dozen others will be shown, while the Las Vegas Philharmonic plays their scores, during “Bugs Bunny at the Symphony.” The event also will feature costumed Warner Bros. characters and an exhibit of animation. See it at 2 and 7:30 p.m. Saturday in Reynolds Hall at The Smith Center. Tickets start at $29; thesmithcenter.com.

The initial First Friday of 2023 runs 5 to 11 p.m. Friday at the Art Walk area along Boulder Avenue and First Street in downtown, with about 60 artists and craftspeople. Jesse Hudson, local photographer and multidisciplinary artist, is featured. The food truck garden, bar area and entertainment are in the Art Square parking lot. Visit ffflv.org for more information.

For folks on a hooch hiatus, Sparrow + Wolf is serving spirit-free cocktails during Dry January. There’s an Orange Creamsicle with orange juice and vanilla bean, and a Sage Me from Myself featuring blueberry and raspberry cold pressed with fresh fennel, plus pineapple, lemon and sage. Straight Edge Punk ’N is crafted with apple and pear jus and yuzu. There’s also Harney & Sons green tea and white peach matcha. The cocktails are $10, the teas $8. Sparrow + Wolf is at 4480 Spring Mountain Road.

Hear music from video games including Animal Crossing, Metal Gear Solid and Kingdom Hearts like you’ve surely never heard it before. Founded by saxophone player Carlos Mata during the pandemic, the six-piece jazz ensemble Arcadebops covers music from those games and many others. See them from 7 to 10 p.m. Saturday at Maxan Jazz, 4130 S. Decatur Blvd. There’s no cover, but there is a $40 food and beverage minimum per person.

You could call it a hot tub time machine — if it weren’t for those pesky copyright laws. The ’80s Heat Hot Tub Party promises a ski-lodge atmosphere with spirit tastings from Skyy Vodka, along with DJ sets and a silent disco. Don your finest 1980s-inspired ski wear for the party that’s scheduled for 4 to 9 p.m. Friday at Circa’s Stadium Swim. Tickets start at $15; circalasvegas.com.

Ready for an international bludgeoning? Of course you are, and German brutal death metallers Defeated Sanity are here to deliver it alongside New York’s Malignancy, Texas’ Prophecy, Northern Ireland’s Strangle Wire and Vegas’ own Excerebration. Get guttural at 7 p.m. Friday at The Dive Bar, 4110 S. Maryland Parkway. Tickets are $20 in advance, $25 day of show; eventbrite.com.

Their influences are obvious, but what they do with them far less so: Los Angeles indie rockers The Buttertones take surf rock, post-punk and R&B flourishes and spin them into a sound that’s familiar and fresh at once, a new take on some vintage jams. See them at 8 p.m. Friday at the Fremont Country Club, 601 E. Fremont St. Tickets are $15; eventbrite.com.

Disney on Ice’s “Road Trip Adventures” pulls into the Thomas & Mack Center this week. The ice show features popular characters leading journeys to iconic Disney destinations, among them the rooftops of London with Mary Poppins, the island of Motunui with Moana and the Pride Lands with Simba, Timon and Pumbaa. Showtimes are 7 p.m. Thursday and Friday, 11 a.m., 3 p.m. and 7 p.m. Saturday and 11 a.m. and 3 p.m. Sunday. Tickets are $20 to $115; unlvtickets.com.