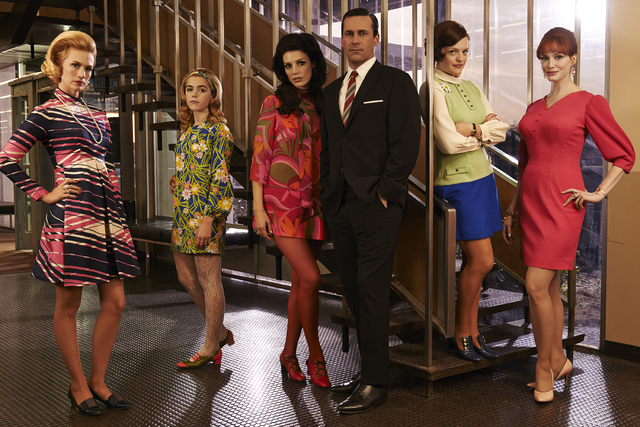 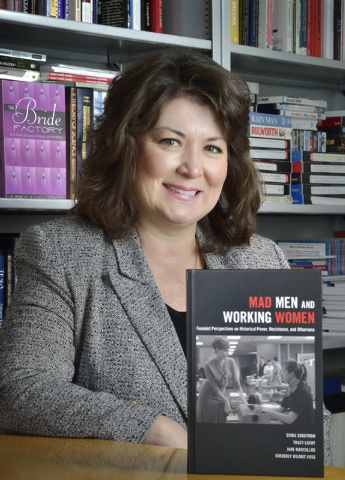 Erika Engstrom, professor of communication studies at UNLV and co-author of a book which provides a feminist take on the women of the television show "Mad Men," is shown on the university campus at 4505 S. Maryland Parkway in Las Vegas on Thursday, May 8, 2014. (Bill Hughes/Las Vegas Review-Journal) 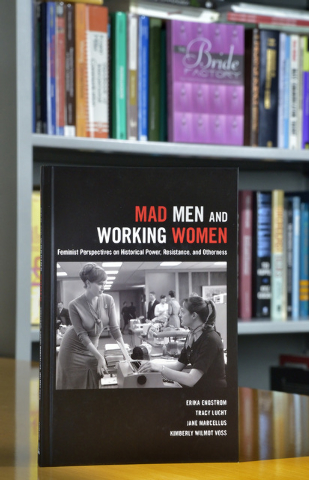 A book co-authored by Erika Engstrom, professor of communication studies at UNLV, is shown in her office on the university campus at 4505 S. Maryland Parkway in Las Vegas on Thursday, May 8, 2014. The work provides a take on the women of the television show "Mad Men" from a feminist perspective. (Bill Hughes/Las Vegas Review-Journal) 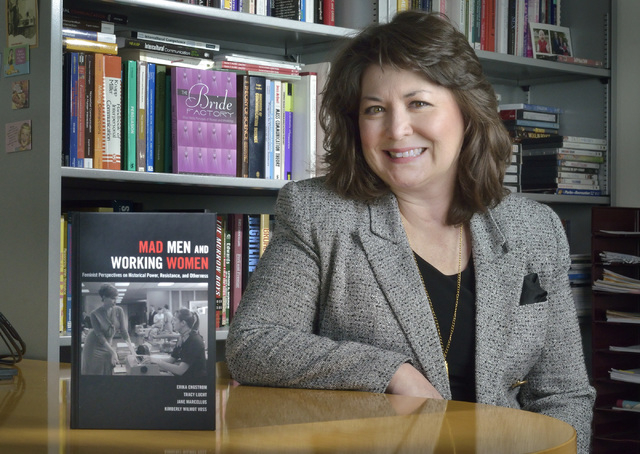 Erika Engstrom, professor of communication studies at UNLV and co-author of a book which provides a feminist take on the women of the television show "Mad Men," is shown on the university campus at 4505 S. Maryland Parkway in Las Vegas on Thursday, May 8, 2014. (Bill Hughes/Las Vegas Review-Journal)

Don’t let the title fool you. “Mad Men,” the popular AMC series, isn’t just about the men who work in a Manhattan ad agency in the ’60s.

In truth, Erika Engstrom says, “it’s as much about the women as the men.”

And in its portrayal of Betty, Joan, Peggy and Megan, “Mad Men” — which this week and next wraps up the first half of its final season — is both retro and relevant in depicting American women at the dawn of the late-1960s/early 1970s women’s movement.

Engstrom, a communication studies professor at the University of Nevada, Las Vegas, isn’t just a fan of the show. She’s also a co-author of “Mad Men and Working Women: Feminist Perspectives on Historical Power, Resistance and Otherness” (Peter Lang International Academic Publishers), which looks at the show’s female characters and their office and personal relationships through a feminist lens.

Because of the time in which it is set, at least some viewers might consider “Mad Men” an “anti-woman,” show, Engstrom says. “Actually, if you look at the subtext and the way things are framed, it’s actually a very pro-women show. You’re seeing what women would go through.”

Set during the decade of the 1960s — the current season has taken the characters into 1969 — “Mad Men” offers a textured look at women of the era via characters who aren’t just cutouts moved around to service plot points, but who are complex enough to seem, in turns, strong, weak, admirable and exasperating.

“It is so well done,” Engstrom says. “It’s meaningful. And the authors of this book, of which I’m a co-author, we all treated it as if it is literature. It’s visual literature.”

Engstrom has seen the online quizzes — “Are you a Joan or a Peggy?” — that take the show’s women characters for feminine archetypes. But, she says, “I reject that outright. Everyone is a unique person, and these women show you that. They’re not stereotypes. Life is messy, and they show you life is messy.”

The show “appeals to a lot of viewers as this nostalgia-type thing,” Engstrom adds, and part of its popularity certainly lies in “the appeal of the time and the fashions and the cocktails and the lifestyle that people had, which is a little different today.”

But, she says, “what attracted me to it is just the stories of the people, and especially of the women.”

“Mad Men” works, Engstrom says, in depicting not only “what women had to go through (then), but it’s stuff women have to go through today.

“Credibility. Being treated like a little girl and not being treated seriously. The issue of motherhood and child care versus career, and career versus home life. Career versus marriage. Peggy can’t find a suitable partner, and the one she does find is married. A lot of career women still face that dilemma today.

“A lot of the show is commentary on today. So even though this is historical, we can’t just say, ‘That was in the Sixties and it’s over.’ ”

Engstrom views the show’s female characters as “highly competent.” Take, for instance, Betty Draper, the former model and trophy wife (and now ex-wife) of main character Don Draper, who may well be one of the show’s most polarizing characters for her seeming emotional frigidity and narcissism.

Betty is “the ultimate corporate wife, and extremely competent in that role. When she married Don and had to deal with all of these business dealings and going to business dinners and meetings, she was really competent and an excellent asset to him in his work,” Engstrom says.

One point in Betty’s favor: Her new husband, political adviser Henry Francis, “really wants to include her in his career,” Engstrom says. “I think she’d be a great politician’s wife, because she’s really strong and doesn’t get upset.”

Where might Betty be when the show concludes its run next year? Engstrom notes that, pre-Don, Betty was “highly educated, then she got married,” and might be primed to eventually embrace the women’s movement as the ’70s arrive.

“I think we might see something from her,” she says.

And what about Sally, the teenage daughter of Betty and Don, who knows too much about the ways of adults and way too much about her own parents, and who may just understand her father better than anybody.

Sally “will be interesting,” Engstrom says, especially in light of this year’s episode in which a now-jobless Don “was bringing her back to school and she finally said, ‘I love you,’ and he was, like, ‘Whaaat?’

“She might be his catalyst. One of the book’s co-authors talks about Sally as being the child of the movement in the Sixties toward feminist ideals. I just imagine her, maybe, going into advertising as her dad did.”

Sally’s stepmother, Megan, joined the series as a receptionist, worked her way up to copywriter, became Don Draper’s latest wife and is pursuing an acting career in Hollywood. Megan, Engstrom says, recalls the stresses women experienced then, and can experience now, in pursuing a career while married to a man who may not be completely on-board.

“She’s different from all of the other women, and now she’s on the other side of the country,” Engstrom says. “What was interesting in the (season) premiere was that she was literally in the driver’s seat when she went to pick up Don at the airport.”

Megan is pursuing her own dream, even if it’s not what Don might prefer. “So she’s interesting,” Engstrom says. “She’s not going to let the marriage control her own destiny.”

However, it’s in the characters of copywriter Peggy and former office manager Joan that the difficulty of having it all most overtly plays out. In the show’s first season, unwed Peggy had a baby with co-worker Pete and gave the child up for adoption, while Joan’s bad marriage resulted in her becoming a single working mother.

In Peggy, the sense is that “you can’t have this big career and have the mother role as well,” Engstrom says. “Mad Men” shows that Peggy “had to make a choice, and that’s still what a lot of women face today in terms of how you’re going to progress in your career when you have children.

“This idea of having it all — motherhood, family, marriage, a career — can really become a sticking point, especially for women. For men, it’s a no-brainer. You can have everything.”

Also true-to-life is Peggy’s difficulty in forging a solid romantic relationship because of her devotion to her career.

“She has been through a lot of boyfriends and has chosen to work instead of being with them,” Engstrom says.

“In one episode, she chose not to go out with family and a boyfriend on her birthday to work on deadline in her office.”

Joan’s romantic history includes an ex-husband who was “a doctor who raped her and was a jerk and was not worthy of her,” Engstrom says. But Joan worked her way up the corporate ladder and, after having slept with a client, even became a partner. When she recently was given a second-floor office, “she literally broke through the (glass) ceiling,” Engstrom says.

Joan’s dedication to her child was illustrated in what she had to do to get that partnership, Engstrom says. “This was another dilemma: How was she going to take care of her child? So she went above and beyond for her kid.”

Yet, Engstrom says, Joan still is perceived in the office not as a full-fledged partner, but as a sort of glorified secretary, illustrating the perceptual hurdles accomplished women can face in the workplace.

On the upside, Engstrom counts as among her favorite moments in the series scenes that feature Joan and Peggy conversing as office equals.

Of course, for all of its pop culture resonance, “Mad Men” is just a TV show and, like any TV show, succeeds or fails on its ability to entertain.

But, Engstrom says, the show also can serve as “a springboard for thinking about things.”

“This show that’s ostensibly supposed to be entertainment also starts people talking and thinking,” she says, “which is rare.”