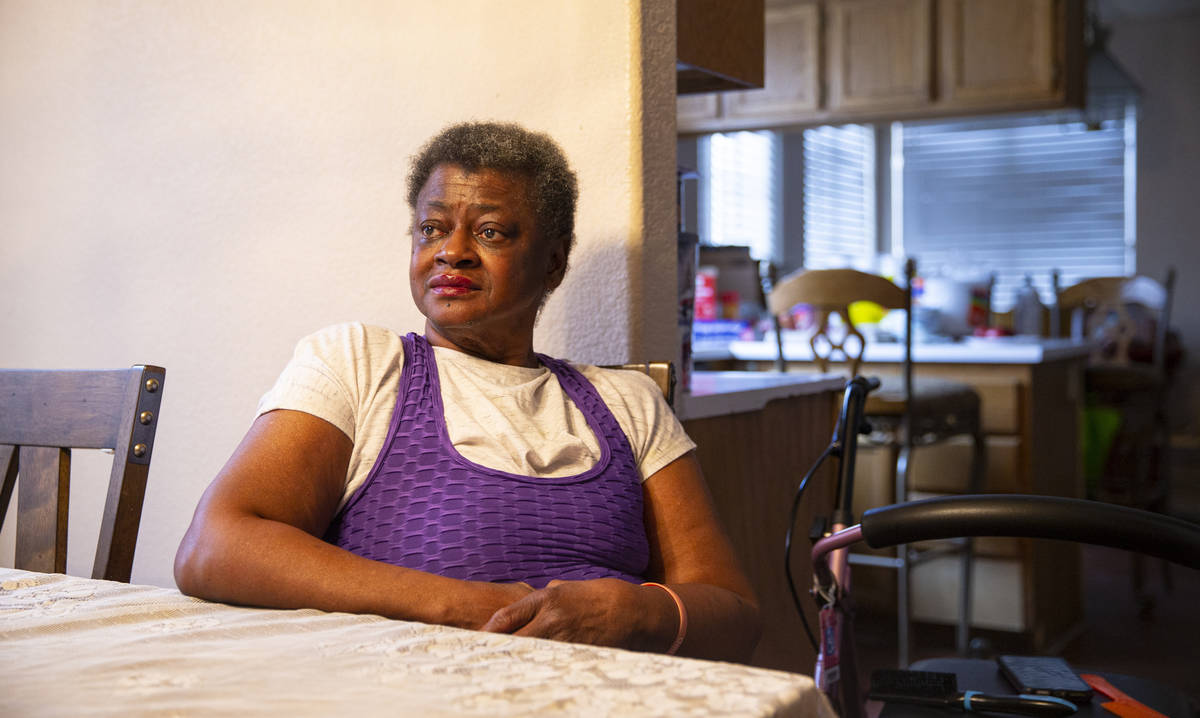 Rose Parker, whose house is being threatened with a foreclosure lawsuit over missed payment of trash bills, rests inside her home in Las Vegas on Wednesday, July 21, 2021. (Chase Stevens/Las Vegas Review-Journal) @csstevensphoto 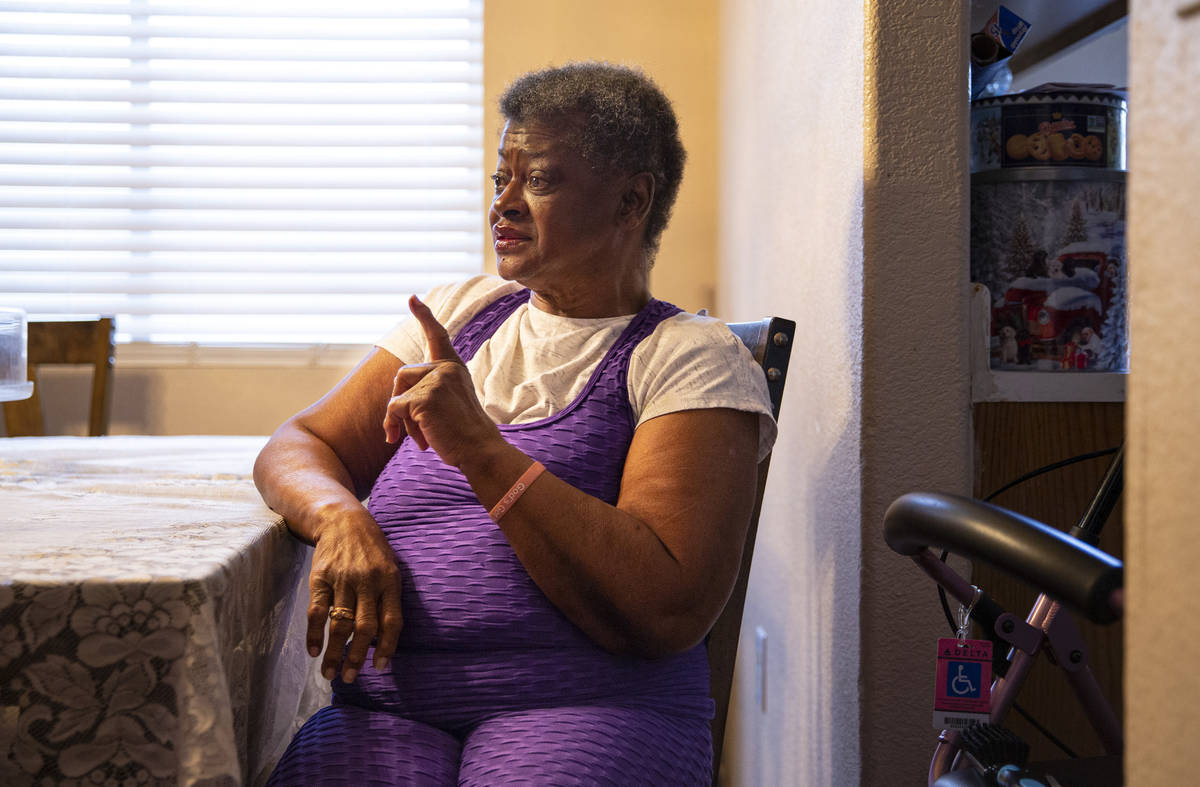 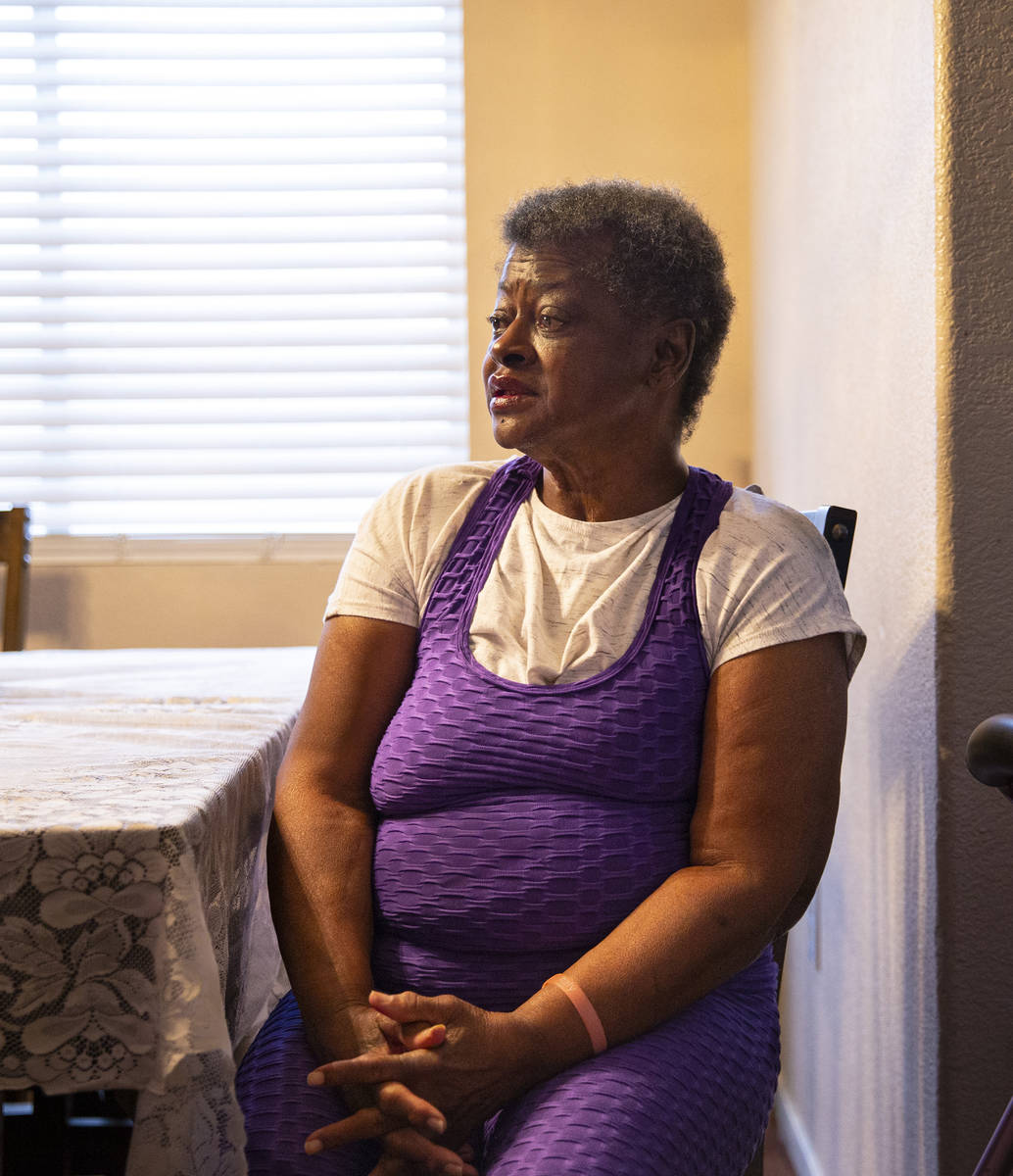 Republic Services of Southern Nevada has threatened almost 150 customers’ homes with foreclosure for overdue trash bills since the start of 2020, demanding both the owed money and the company’s attorney fees, court records show.

In most cases, the customers owed the waste disposal company less than $5,000 from overdue bills and associated late fees. But its attorney fees can cost thousands of dollars more, said Legal Aid Center of Southern Nevada attorney Peter Aldous.

The company increased the annual number of foreclosure lawsuits it filed against homes between 2018 and 2019, and again in 2020, he said.

“I think it’s wildly disproportionate to take someone’s home for a very small amount of money,” said Aldous, part of the Legal Aid Center’s Consumer Rights Project. “During a pandemic when everyone is struggling, I would expect to see a decrease in the number of these cases, not an increase.”

Only a handful of the cases filed by Republic Services since 2020 have ended in a court-ordered foreclosure, records show. More than 90 have been dismissed, which Aldous said likely means an out-of-court settlement was negotiated.

Republic Services declined to be interviewed or answer written questions about the foreclosure lawsuits or what options for repayment it offers customers who fall behind on bills. However, a company representative defended the practice of filing foreclosure lawsuits in an emailed statement.

“Unfortunately there are times when customers’ accounts become overdue to the point that Republic must exercise its authority to impose a property lien in order to ensure eventual payment for the services rendered,” according to the statement.

Republic Services is the only company allowed to collect solid waste in the Las Vegas Valley. State law requires that it continue collecting a customer’s trash, even if they don’t pay their bill, for public health reasons.

Instead of pausing service at delinquent properties, state law allows the company to periodically place liens on them.

The liens must be paid in order for a homeowner to sell their property or refinance their mortgage, Aldous said. Republic Services can also try to foreclose on the home at any time after a lien is filed.

It is similar to how homeowners associations in Nevada can start foreclosure proceedings if the owners fall behind on their association dues. Banks regularly foreclose on homes if a mortgage goes unpaid, although state and federal officials have ordered stops to such foreclosures during the pandemic.

The bans did not apply to trash or HOA lien foreclosures, Aldous said.

Republic Services placed liens on more than 99,000 individual properties between March 1, 2020 and March 31, 2021, county spokesman Erik Pappa said. An almost identical number of properties received liens each of the two years prior.

Republic Services filed about 90 foreclosure lawsuits against residential homes owned by an individual or trust in 2020, compared to less than 70 in 2019 and less than 40 in 2018, according to Aldous. This year, it has already filed more than 50, most of which have been for bills totaling less than $5,000.

“It seems like they are resorting to this foreclosure remedy way more often and for much smaller amounts than they need to be,” Aldous said.

Some of the company’s most indebted customers facing foreclosure lawsuits had outstanding liens stretching back more than a decade, while others spanned two or three years, records show.

Aldous said its not clear why the company is choosing certain properties for foreclosure. One trend he’s noticed is that the homeowners have previously filed for bankruptcy.

That was the case for Las Vegas resident Yusileysi Guzman-Batista, who owed Republic Services about $600 when an attorney representing the company emailed her this March.

The correspondence demanded she pay the full amount, plus an additional $2,300 in attorney fees. Entering a repayment plan lasting up to six months would cost her an additional $550.

“I am not able to negotiate on the above numbers to any degree,” the attorney wrote in the email, giving her a week to respond.

“(The attorney) told us that if we did not give him an answer before that date, he would go directly to court to have our house seized,” Guzman-Batista said in an interview translated from Spanish.

Th 42-year-old mother of two said her husband lost his trucking job during the pandemic, and most of their unemployment checks were going toward paying their home’s mortgage. Court records show the family had filed for bankruptcy in November.

Republic Services had placed two liens on her home, stating she had missed payments as far back as September 2019, records show. She went to the Legal Aid Center for legal assistance after receiving the email.

Guzman-Batista said the company never offered her a repayment plan before the email. The liens against her home were released in May, after she paid her bill and the attorney fees using pandemic stimulus checks her family received.

“That is why we were able to pay that demand. Otherwise, we could have lost the house,” she said. “I feel bad because I had to use the money they gave for my children.”

But customers face additional fees when the company files liens with the county. For example, each of the two liens Guzman-Batista received for six months of unpaid bills cost more than $300.

The company’s liens have a “super priority position,” meaning the debts would be among the first paid by foreclosure sale proceeds, even before the homeowner’s mortgage.

Aldous said in some of the cases that have been settled and dismissed, the homeowner’s mortgage company has agreed to pay Republic Services. In that scenario, it’s common for the home’s mortgage to be raised to cover the cost of the lien and attorney fees.

For anyone who falls behind on their bill, “the best advice I’ve got is to reach out to Republic (Services) and make a payment arrangement with them,” Aldous said, before the company files liens or threatens foreclosure.

Las Vegas resident Rose Parker could lose her home of 25 years for an unpaid bill of about $1,850.

The 68-year-old said she stopped working as an in-home care aide in 2017, following a back injury and breast cancer diagnosis. She receives $2,000 a month in Social Security benefits, most of which she spends on her mortgage, groceries, medical co-pays and insurance on the car she uses to get to physical therapy.

“When you finish with that, you really don’t have much of nothing left,” she said. “I been making payments on it, but I can’t meet the amount that they want at a time.”

Republic Services has placed liens on her home for years, some of which Parker said she has paid off over time. She also used money from her stimulus check to bring down her balance.

She said the company did not offer her a repayment plan before filing the foreclosure lawsuit in district court. She’s now responding to the lawsuit with the help of a pro-bono attorney after contacting the Legal Aid Center.

“I think that’s pretty cruel, because they don’t give a darn about whether I have a place to live,” she said. “I don’t have anywhere to go.”