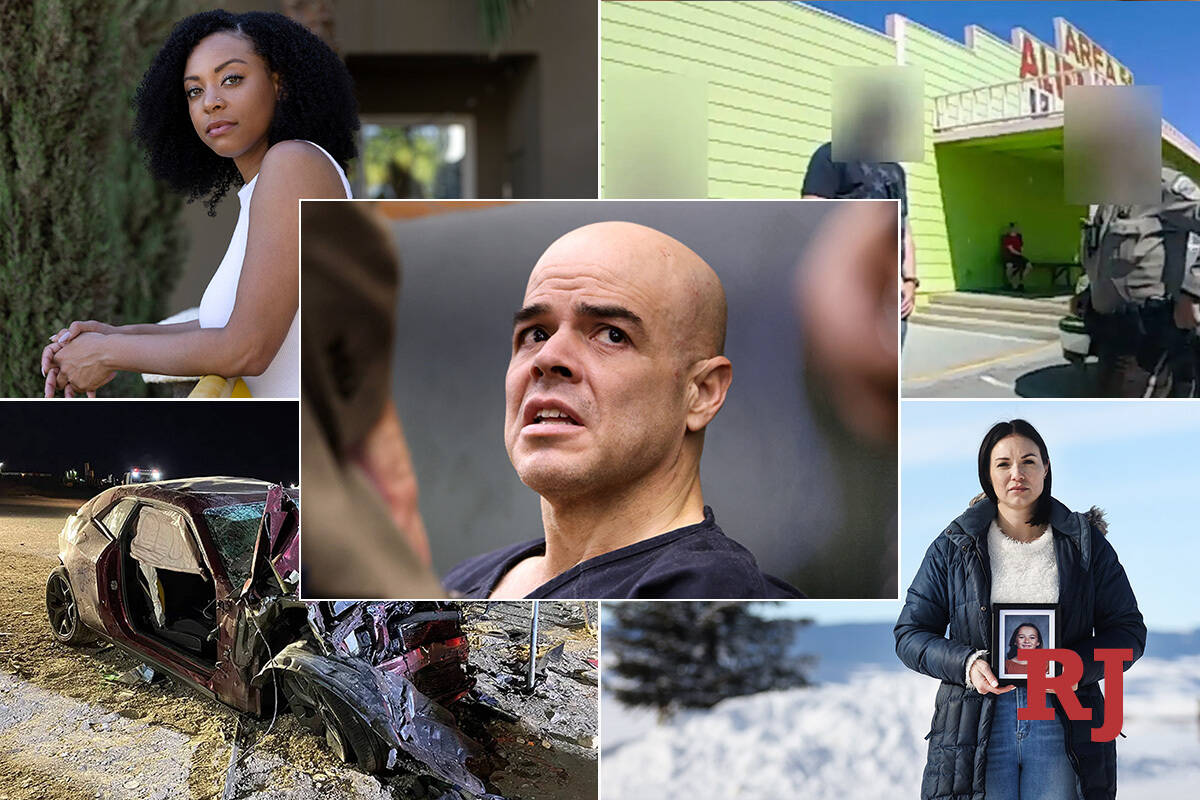 The Review-Journal’s investigative team spent most of the year uncovering allegations of misconduct and abuse — from county agencies to the Las Vegas Raiders — and also scrutinizing Southern Nevada’s jump in traffic fatalities.

But the team suffered a devastating blow with the murder of one of their own in September.

German’s reporting resulted in Telles losing his re-election bid, forced the county to contract with former coroner Michael Murphy to mitigate tension in the office, and exposed an alleged affair Telles was having with a subordinate. German was pursuing another story when he was stabbed to death.

“The Review-Journal family is devastated to lose Jeff,” Executive Editor Glenn Cook said after the murder. “He was the gold standard of the news business. It’s hard to imagine what Las Vegas would be like today without his many years of shining a bright light on dark places.”

— Telles was arrested in 2020 for domestic abuse, workers were never informed of the incident.

— Telles’ toxic and inappropriate behavior went unchecked for a decade.

— Police are investigating allegations that Telles orchestrated a house-flipping scheme to profit from property sales handled by his office.

Reporter Arthur Kane also revealed Telles was provided two public defenders despite having significant assets. Telles, who was indicted on a murder charge in October, hired a private attorney after the story was published.

The newspaper continues a legal battle to shield access to German’s laptops and phone, confiscated after his death, and which likely contain details of confidential sources.

The investigative team completed stories German was working on before he was slain.

Kane finished a story about a lawsuit filed by Las Vegas Councilwoman Victoria Seaman against then-colleague Michele Fiore and the city after Fiore allegedly assaulted her. Kane broke the story of the internal city report on the attack. The story revealed the city deleted a video of the fight, a record requested multiple times by German. Fiore lost her election bid for state treasurer.

Reporter Briana Erickson completed a story German had started writing on Stewart Rhodes, the founder of the anti-government Oath Keepers group and it’s beginnings in Las Vegas. Rhodes was convicted of seditious conspiracy in connection with the Jan. 6 attack on the U.S. Capitol.

German was inducted into the Nevada Press Association Hall of Fame a few weeks after his death. He was the first reporter killed by a public official in the United States in more than half a century.

Stories about corruption, misconduct and trumped-up criminal charges by Nye County Capt. David Boruchowitz caught the attention of the FBI, which raided the office in August.

Our reporting also found that Nye County deputies failed to follow DUI policy and released an impaired driver an hour before he crashed into an Idaho family’s car, killing three people. The story found that officials’ statements that deputies didn’t think the driver was high were false. The newspaper obtained bodycam video showing Kennedy admitting to deputies that he had to regularly use drugs to avoid withdrawal.

The Nye County sheriff, who defended the actions of the deputies, lost re-election after the stories ran. The department’s arrest policy was updated to specifically list DUI and reckless driving suspects as those who must be arrested and not cited and released.

Kane wrote an exclusive story about a questionable shooting by a Bureau of Land Management trainee in March northeast of Las Vegas, using investigative records and video obtained from a source. Experts reviewing the documents questioned whether the shooting was justified and whether a Metro police investigation of the incident was severely flawed.

Reporter Michael Scott Davidson spent months analyzing data and talked to dozens of safety experts, victims, law enforcement officials and attorneys. He and a photographer spent a week in traffic court. We found that the problems are complex:

— Clark County court systems face a daily influx of new citations — one reports a backlog of more than 170,000 pending traffic cases. Every month, thousands of Southern Nevada traffic tickets — even those for the most serious offenses — are negotiated down to clear overburdened dockets.

— Hundreds of children have been hit by vehicles while biking or walking near Las Vegas Valley public schools, but educators and parents are unaware of the vast majority of crashes, reducing the ability to target danger zones.

— Speeding continues to be a big factor. Nevada police wrote more than 5,100 speeding tickets for drivers traveling 100 mph or more in 2021, the second year in a row that citations jumped. One official said the numbers would be much higher if staffing within the Nevada Highway Patrol wasn’t at “critically low levels.”

Our reporting has had a positive impact: Coming off a deadly year, Clark County created a new Office of Traffic Safety early in 2022. Erin Breen, head of a traffic safety coalition at UNLV, said our pedestrian analysis of danger areas around school zones initiated county meetings for adding crossing guards at middle schools. State officials announced they are creating a task force to study how frequently traffic tickets are reduced to parking violations in court. The group may make recommendations to the Nevada Legislature, which convenes in February 2023.

After the exits of at least 10 Raiders executives, including longtime president Marc Badain and head coach Jon Gruden, the Review-Journal dug into the organization’s inner turmoil.

The investigation found that problems within the Raiders started before the team moved from Oakland. Lawsuits and interviews with former employees alleged discrimination and a violation of state labor laws. Women who used to work for the team claimed harassment, forced demotions and unequal treatment. One woman filed an EEOC complaint against the Raiders and described feeling sexually harassed and retaliated against.

Raiders owner Mark Davis announced changes to address the claims of a hostile environment amid growing scrutiny of NFL workplaces. He hired Sandra Douglass Morgan as president of the Raiders, a move that he said was months in the works. It also made her the first Black woman to be president of an NFL team.

In early 2022, the Review-Journal examined the high number of service calls in Clark County. Police logged roughly 44,000 service calls and patrols at just three Boulder Highway extended-stay motels since 2017, records showed. Experts said it appeared to be a massive use of taxpayer-funded resources. Our analysis found the three motels accounted for more than one-fourth of all patrols that Las Vegas police recorded at the hundreds of motels and apartments in their jurisdiction, despite each business having on-site security.

Erickson found that the three remaining SHARE properties were listed for sale, potentially losing their affordable housing status. The listing raised more concerns about the charity’s stability and obligation to vulnerable populations. Stalk suddenly pulled back the listings in March, after the Review-Journal began asking questions. Once called Veterans Village, Stalk’s operations are funded through public and private donations and rent. The city of Las Vegas awarded him $2 million in taxpayer-funded loans for building purchase and renovation. But tenants at the first complex complained of substandard conditions.

The investigative team’s work has been honored by the National Headliner Awards, Best of the West, Society of Professional Journalists/Las Vegas, Pacific Southwest Emmy® Awards and the Nevada Press Association, including Reporter of the Year honors for Kane and Journalist of Merit honors for Erickson. In 2023, we look forward to adding two reporters to increase our watchdog reporting.

Have story tips? Here’s how to reach us: