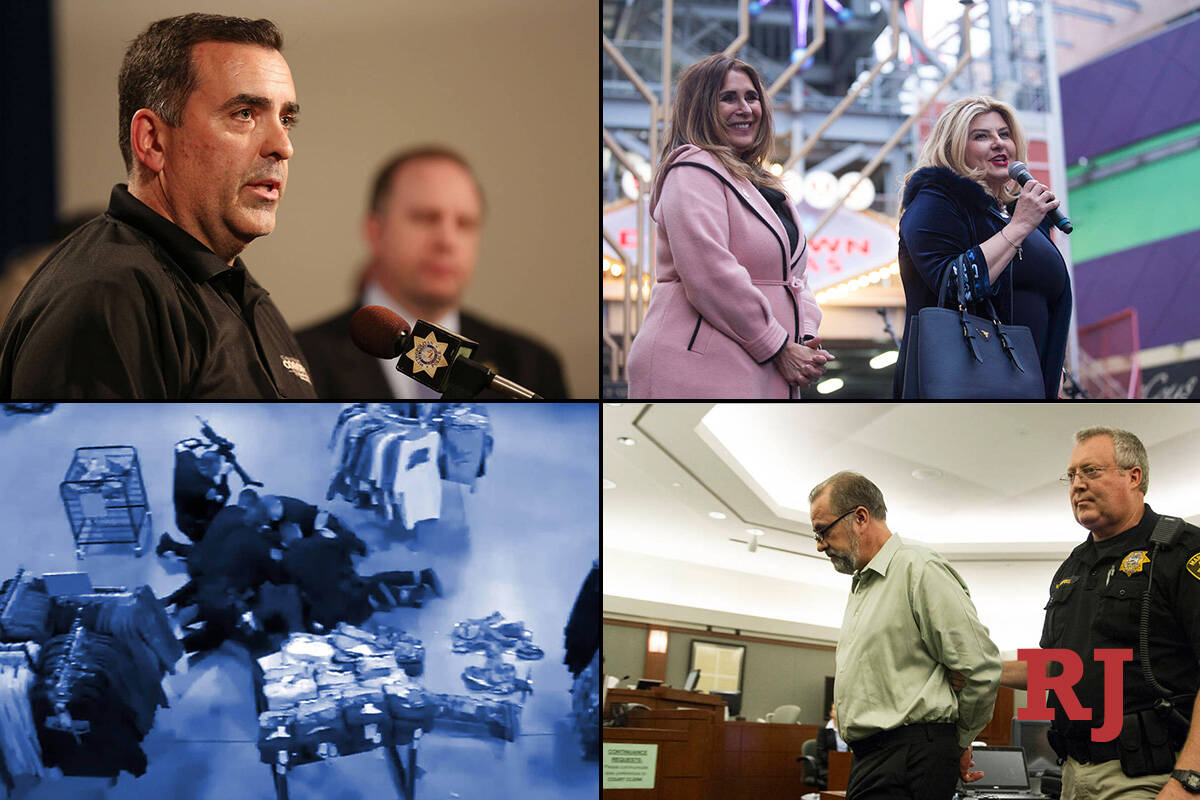 We scoured thousands of public documents and filed hundreds of records requests, obtained damning video footage and interviewed countless Nevadans. We analyzed government data to determine the success of the COVID-19 response and discover why the state’s early vaccine allotment was so low. We fought for public records that agencies wanted to keep hidden.

Our deep reporting uncovered federal investigations into local government officials. Our months-long investigation showed that police officers with repeated misconduct complaints and criminal charges remained on the job, and we revealed why dozens of state workers fired for serious sustained misconduct got their jobs back through arbitration.

We kept up with victims of the Alpine Motel Apartments fire and exposed how a top county official used his office to benefit himself on taxpayer time, and claimed degrees from a discredited diploma mill.

Without the Review-Journal, these stories would not have been told.

Here is some of the top investigative and exclusive enterprise work from our newsroom this year:

Clark County Coroner John Fudenberg and his office received nationwide accolades following the Oct. 1, 2017, attack at the Route 91 Harvest festival. But behind the scenes, the coroner’s office was awash in problems under Fudenberg’s leadership: workers accused one another of sexual harassment and delays in autopsies threatened the agency’s accreditation.

Fudenberg claimed university degrees from a discredited diploma mill. He also made thousands of dollars, on taxpayer time, for outside speeches related to the Oct. 1 shooting.

The former coroner also cashed out nearly $20,000 in unused vacation time at his retirement, but his work calendars showed he took hundreds of hours of vacation that weren’t recorded in the county’s payroll system.

Henderson police officers with years of sustained citizen complaints, allegations of sexual misconduct or criminal arrests are still working, and some have been promoted, the Review-Journal found. Reporter Arthur Kane spent months going through records and internal affairs data going back nearly 20 years, finding more than 150 officers were involved in five or more incidents where misconduct allegations were filed against them.

In another story, the newspaper found that the Clark County Citizen Review Board almost always dismissed citizens’ complaints against Metropolitan Police Department officers, or sided with the department’s internal affairs determination. Out of nearly 900 cases the board received since 2018, only eight were referred to a hearing panel to decide whether Metro internal affairs made the correct decisions in response to a misconduct complaint, records show.

Las Vegas police rarely held accountable for misconduct by board

And dozens of government employees in Nevada accused of misconduct were fired and then reinstated through arbitration in the past five years — despite sustained allegations and supervisors deeming them unfit for the job.

City Councilwoman Michele Fiore’s campaign finances are under scrutiny by the FBI, the Review-Journal reported this year. Sources said the agency’s investigation into Fiore dates back until at least January 2021, when federal agents raided her Las Vegas home.

A federal grand jury later issued subpoenas for records pertaining to Fiore’s campaign and political action committee, Future for Nevadans, as part of the investigation, the Review-Journal reported.

Fellow City Councilwoman Victoria Seaman also participated in an interview with FBI agents, the Review-Journal reported. Seaman has accused Fiore of breaking her finger and throwing her to the ground in a hallway behind the City Council chambers in January. City officials deleted surveillance videos of the alleged altercation, despite the Review-Journal requesting copies under Nevada’s public records laws.

Seaman accuses Fiore of bullying and assaulting her at City Hall

The Review-Journal reported the Southern Nevada Regional Housing Authority was also under federal investigation in the months leading up to the removal of the agency’s top two employees. Without explanation, the agency placed Executive Director Chad Williams on paid administrative leave in February for more than three months before letting his contract expire.

Chief Operating Officer Theodore C. Tulle, the housing authority’s second-in-command, was fired in early March. He had been on paid administrative leave since August 2020, the Review-Journal reported. Tulle faced a sexual misconduct investigation carried out by the Office of Inspector General for the U.S. Department of Housing and Urban Development.

Victims awaiting money from Clark County’s largest restitution in recent history had not received a dime after years of waiting. In 2016, clients of former Las Vegas Attorney Robert Graham filed suit to recover money from his defunct law firm. Graham was sentenced to prison for stealing about $17 million from dozens of clients. But as of January 2021, only accountants and attorneys had been paid.

In four years, Graham case has paid lawyers, trustees. But not crime victims.

A young woman’s big secret was exposed in the small community of Mesquite in an unlikely setting: the race for mayor in 2020. After the woman, Kylee Tobler, shared details with the Review-Journal about being sexually assaulted as a teenager, a reporter found other sources and records to show how her case had been politicized and made public during the election in a series of mailers sent to Mesquite residents. The story also raised questions about how the criminal investigation was handled.

In the race for mayor in this small town, a big secret is exposed

The company that operates Siegel Suites received millions of dollars in federal rental assistance, but records show it evicted hundreds of tenants during the COVID-19 pandemic by using “no-cause” evictions which were not explicitly forbidden by Nevada’s eviction moratorium for months in 2020. Some residents alleged they were evicted because they were behind on rent.

Their landlord got millions in rental assistance. They faced eviction.

Following the investigation, a U.S. House panel announced it would scrutinize The Siegel Group’s eviction practices.

The Siegel Group under scrutiny by House panel for eviction practices

Reporters analyzed how well Gov. Steve Sisolak had adhered to his public promise to be transparent about the state’s COVID-19 response. They found that some government offices, including Sisolak’s, had taken months to produce public records about the response — and fought to keep others hidden.

The news organization also revealed that Nevada had been shortchanged in its allotment of vaccine from the federal government due to its reliance on old population data.

Two years after the downtown Alpine Motel Apartments fire killed six people and injured 13, survivors are still waiting for justice. Many former residents say they’re struggling financially, are still displaced and have been unable to replace their belongings. The preliminary hearing in the criminal case against the building’s owner, Adolfo Orozco, and property manager Malinda Mier began in August 2020 but has been halted as attorneys await a court ruling.

The Alpine fire took everything from them. They still wait for justice.

A new city program to inspect dozens of potentially at-risk apartment complexes for fire code violations got off to a sluggish start, the Review-Journal found. As of December, the city had surveyed only five of the 36 complexes it had identified in April. Officials estimate the rest will be inspected by August 2022.

Have story tips? Here’s how to reach the investigative team:

A previous version of the photo caption misidentified the police agency that the officer worked for.