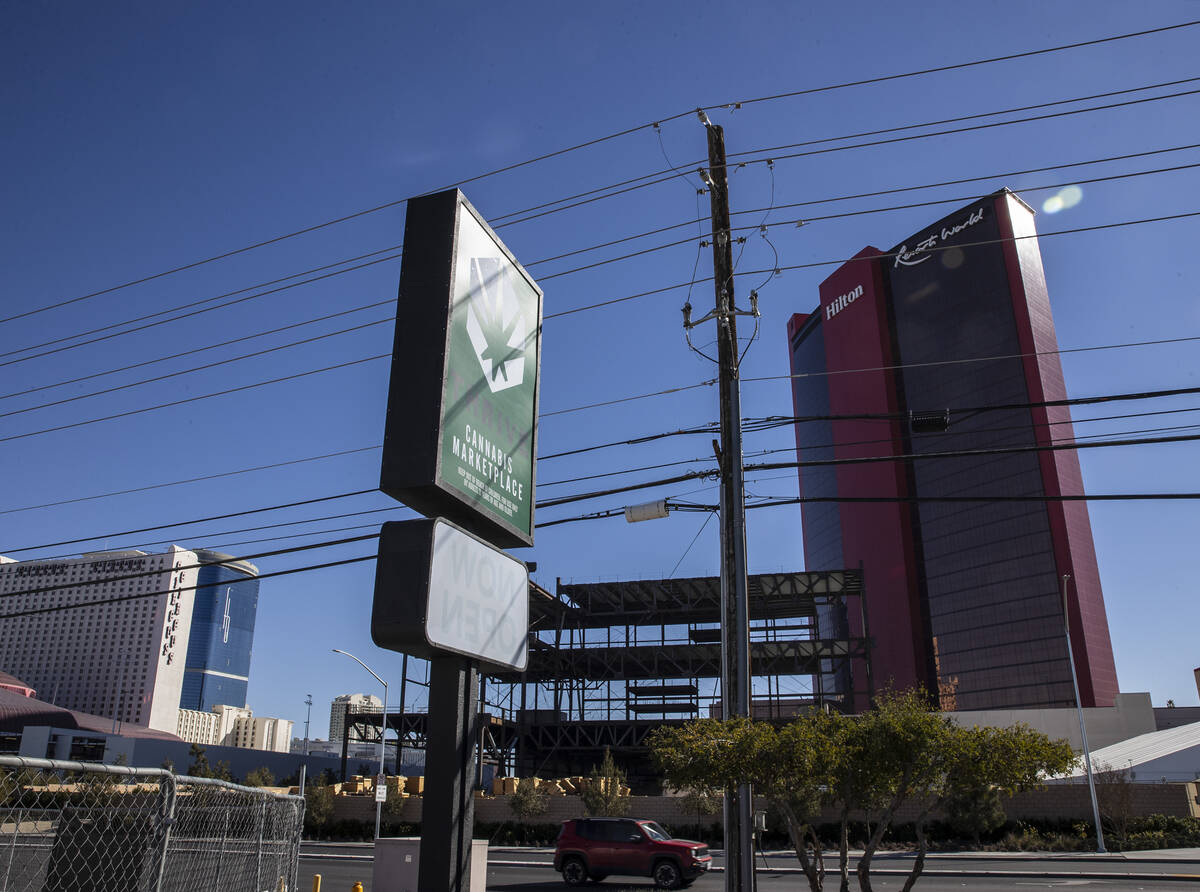 The licensing process for THRIVE Cannabis Marketplace, an unfinished marijuana dispensary, has come under fire from Clark County commissioner Ross Miller. The site, next door to a topless club, is less than 1,500 feet away from Resorts World, according to Miller. (Bizuayehu Tesfaye/Las Vegas Review-Journal) @bizutesfaye 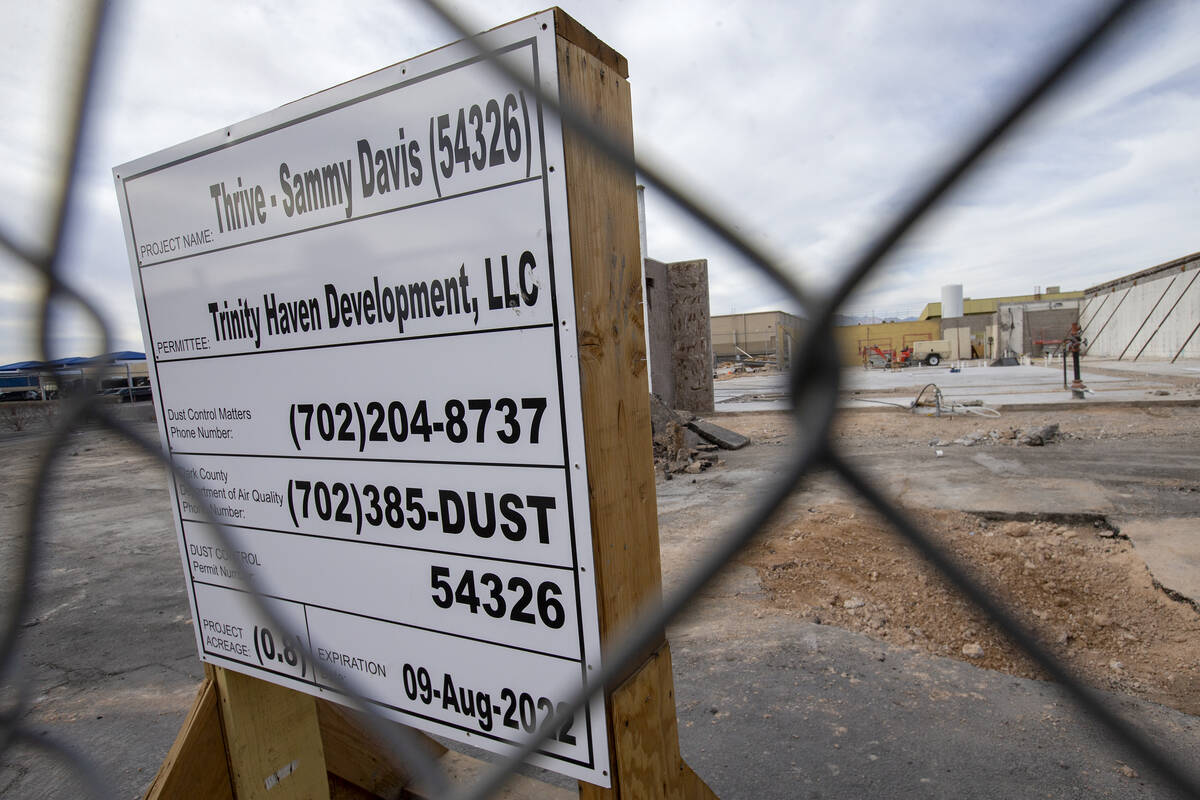 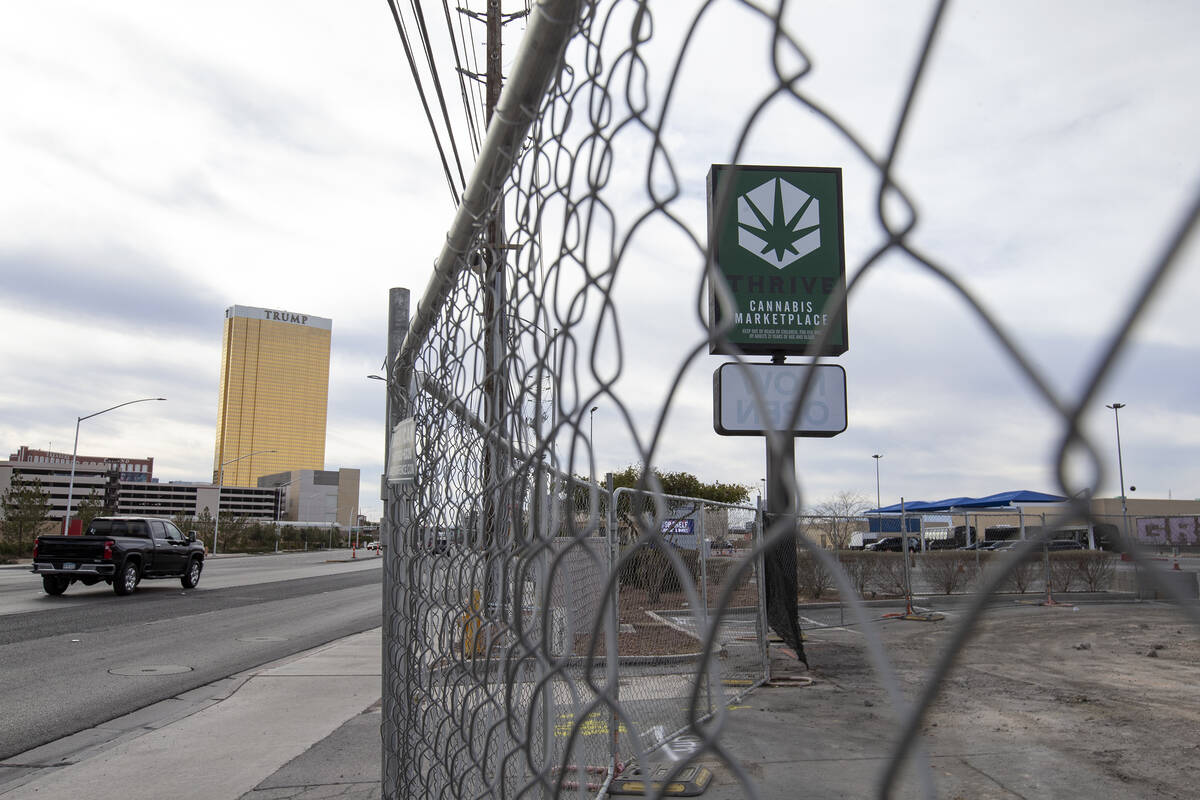 The licensing process for THRIVE Cannabis Marketplace, an unfinished marijuana dispensary just off the Strip, has come under fire from a Clark County commissioner. (Ellen Schmidt/Las Vegas Review-Journal) 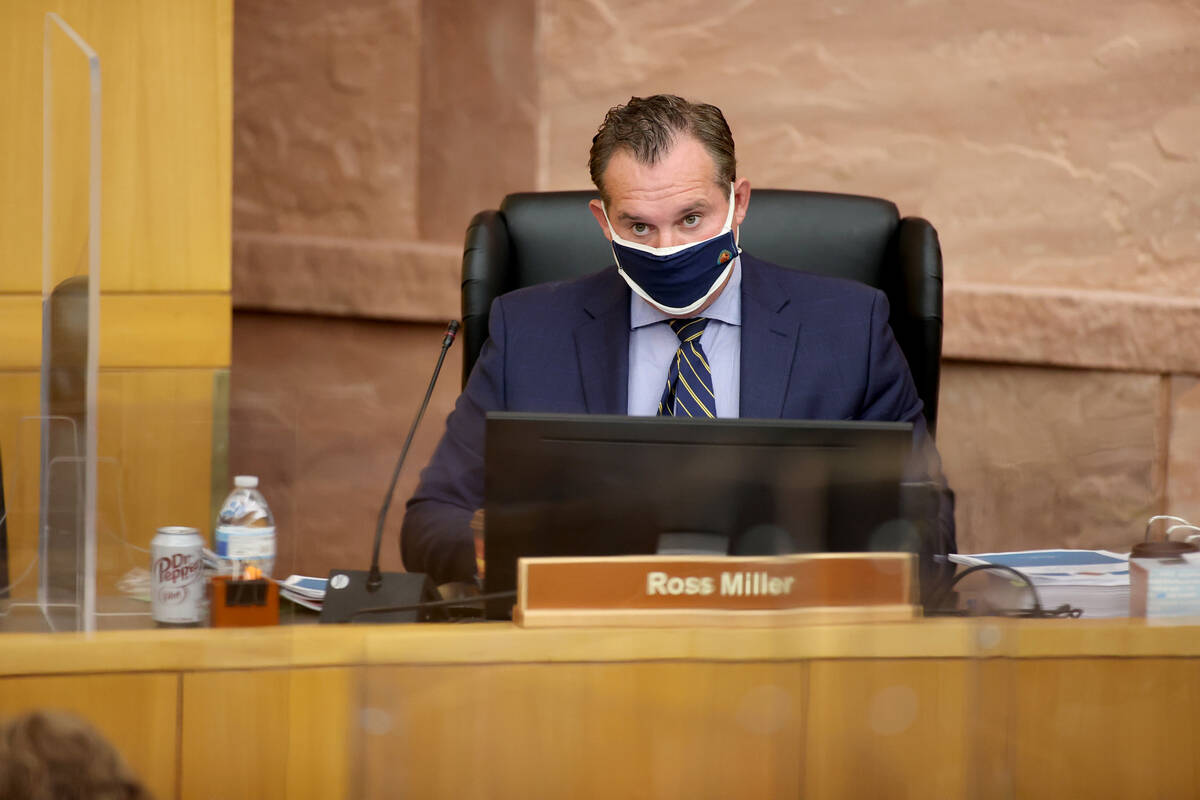 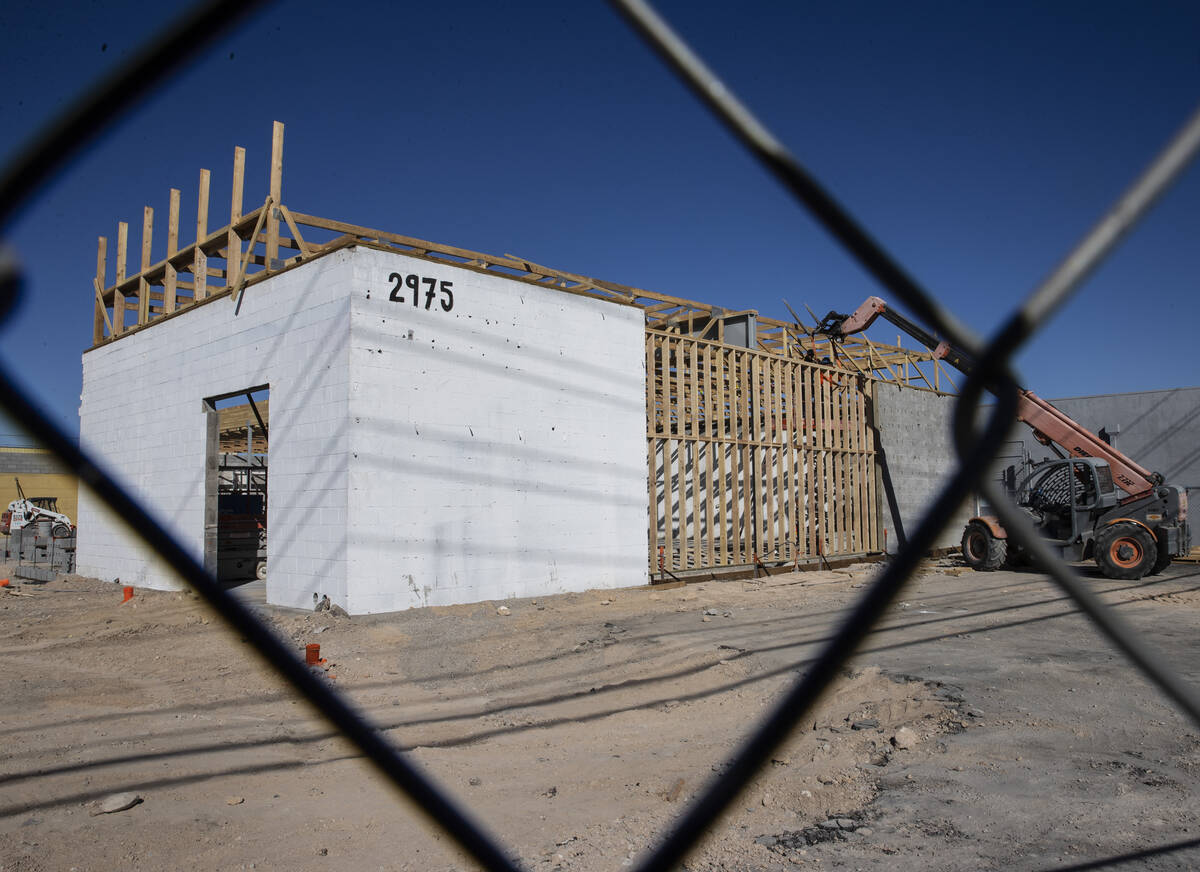 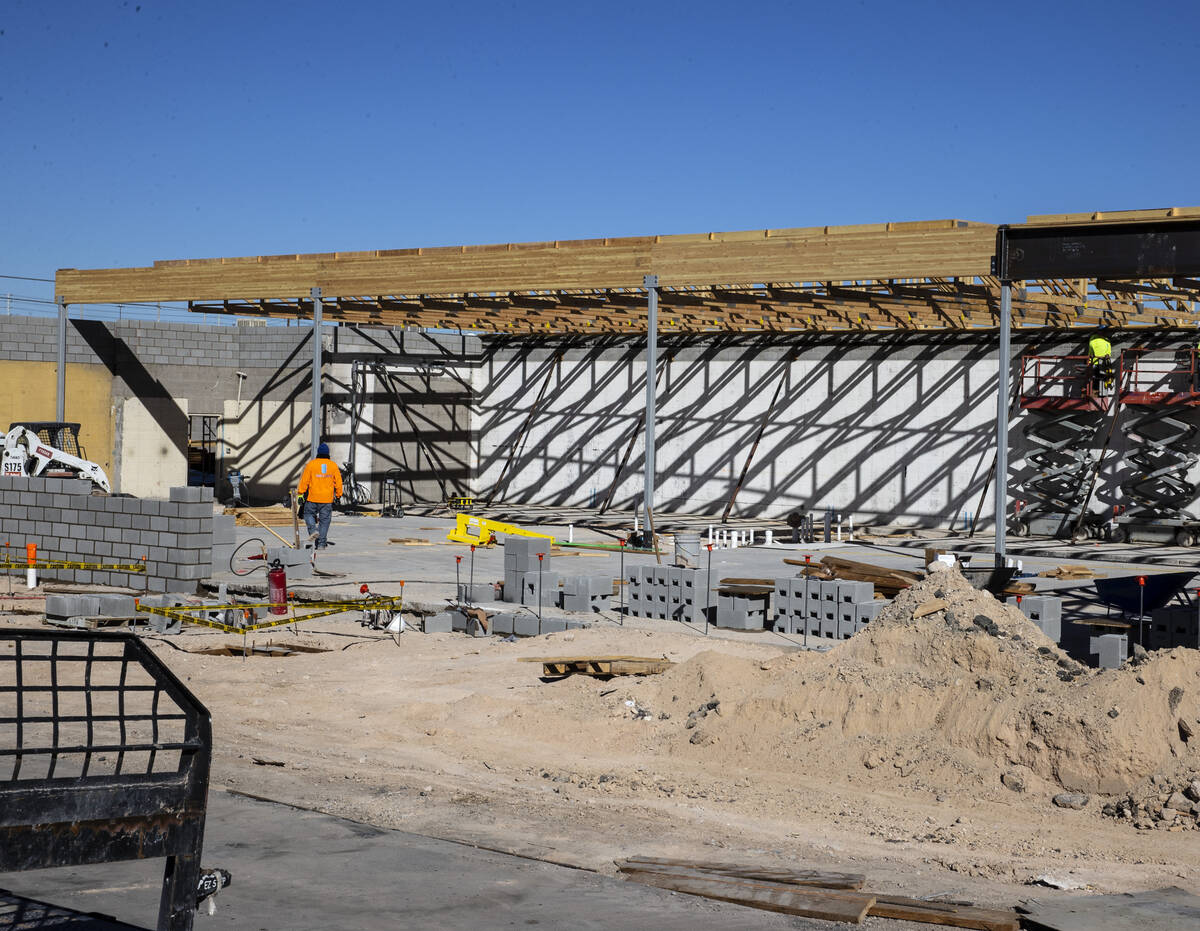 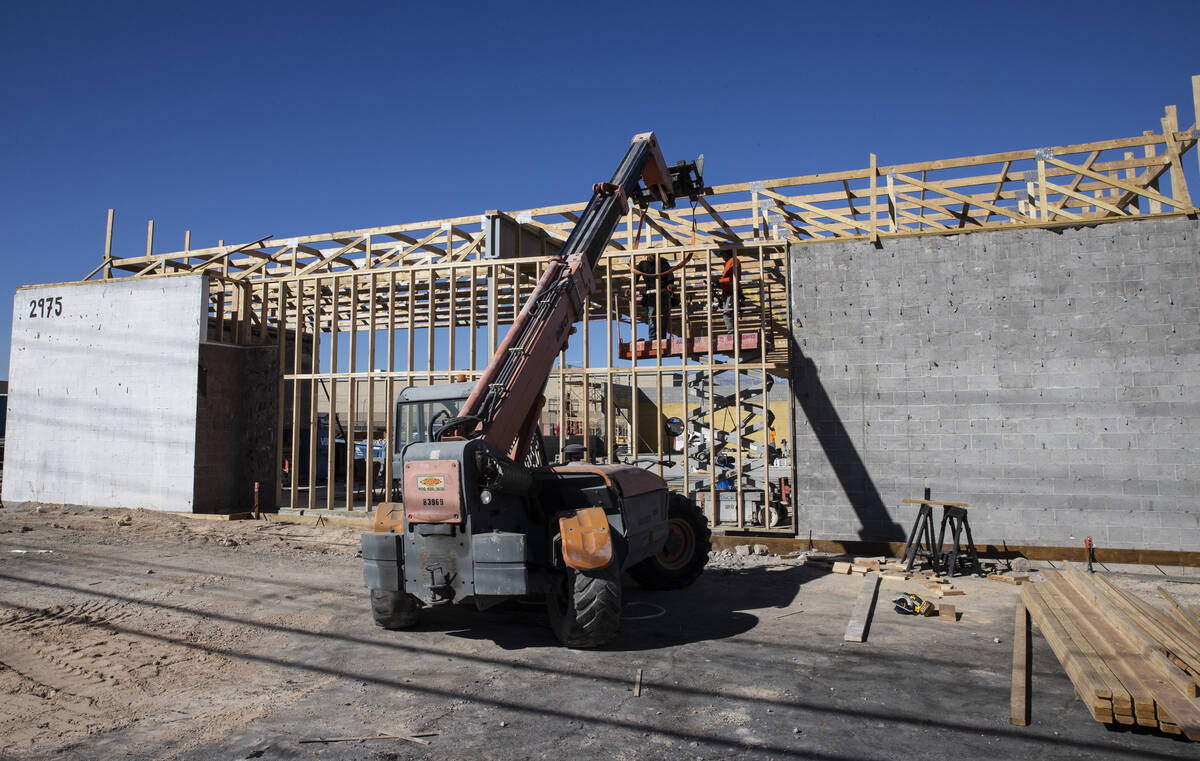 Some construction has started on the site, as seen in the photo taken Thursday, Jan. 27, 2022, in Las Vegas. (Bizuayehu Tesfaye/Las Vegas Review-Journal) @bizutesfaye

Clark County Commissioner Ross Miller is questioning the regulatory process that allowed an unfinished marijuana dispensary just off the Strip to sweep through licensing hurdles.

Cheyenne Medical, which does business as Thrive Cannabis Marketplace, was quietly licensed last month without a public hearing before the Clark County Commission, in possible violation of a 2019 state law that bans marijuana operations within 1,500 feet of a casino, Miller said.

The dispensary site, at 2975 Sammy Davis Jr. Drive, next door to a topless club, is less than 1,500 feet away from Resorts World Las Vegas, the Strip’s newest megaresort, according to Miller and a county report.

The one-acre site borders the north end of the parking lot for adult nightclub Sapphire Las Vegas. Some construction has started at the site, which a month ago was mostly a dirt lot surrounded by metal fencing with signs promoting the Thrive dispensary. There’s a partial, white cement structure with a makeshift address.

Cheyenne Medical/Thrive has a lease to run the dispensary at the Sammy Davis Jr. Drive property, which is owned by one of Sapphire Las Vegas’ partners, Michael Talla. Government insiders say the company now has the ability to open a more lucrative marijuana lounge there.

Miller said the county’s application process in this case circumvents the 2019 state law that applies the same tough regulatory standards for the casino industry to marijuana dispensaries.

“And so when you look at the way this was handled, you can’t tell me with a straight face that we’re regulating marijuana like gaming,” Miller said. “It’s a joke.

“I would say I have big concerns about the approval process that allowed this applicant to get full county and state licenses. Only a few days before they were given these approvals, they were in front of the entire County Commission asking for a two-year extension where staff said they weren’t even close to completing what they were required to do.”

Since Nevadans voted to legalize recreational marijuana in 2016, most of the criticism about regulating the fledgling industry has been directed at the state, not the county.

The Review-Journal reported in August that the FBI was investigating whether illegal influence played a role in how the state awarded lucrative cannabis licenses. A year earlier, during high-profile litigation over regulating marijuana dispensaries, a District Court judge questioned the fairness of the state’s process under the Nevada Department of Taxation.

The state’s regulatory system was strengthened by the 2019 law, which took away licensing from the taxation department and put it under a new Cannabis Compliance Board that conducts business in the public eye in the same manner as the Nevada Gaming Control Board.

Miller, a lawyer and former Nevada secretary of state, has raised questions about a lack of transparency in the county’s licensing process of the Cheyenne Medical/Thrive dispensary. He wants a public discussion before the entire County Commission.

At a 2020 meeting of the Nevada Cannabis Compliance Board, Talla said he bought the one-acre property several years ago with the intent of moving a marijuana dispensary there. He said he wanted Cheyenne Medical to run it.

State records list Talla as the manager of the company that owns the politically connected Sapphire Las Vegas. Over the years, the adult club has contributed thousands of dollars to prominent county and state elected officials.

Efforts to reach Talla were unsuccessful. Lucy Stewart, a Cheyenne Medical land use consultant who has represented the company before the County Commission, did not return calls seeking comment. Neither did attorney Derek Connor, who has spoken on behalf of the company in state proceedings.

But Miller is furious.

“We’re supposed to review this to make sure that it’s an appropriate location, that the building is of adequate size,” he said. “You have to submit a business plan and an operations plan. You have to make sure it’s not near certain businesses or schools. None of those things were apparently followed here.”

In an email to county officials outlining his concerns, Miller added: “The county’s process in approving this license provides no greater comfort that any meaningful regulatory review was ever conducted for Cheyenne Medical’s application at this location.”

Responding to Miller’s transparency concerns, county spokesman Dan Kulin said, “The county public hearings on cannabis businesses are done through the land-use process. There was a public hearing on the special use permit for this location in 2017.”

Cheyenne Medical/Thrive didn’t become involved in the landlord’s effort to put a marijuana dispensary on the Sammy Davis Jr. Drive property until 2020, roughly three years after a land-use hearing for the property, records show.

The company went before the County Commission on Nov. 17 seeking an extension to complete construction of a 9,454-square-foot cannabis facility, records show.

But county staffers recommended denying the extension, which threatened Cheyenne Medical’s ability to obtain its county business license by Dec. 6, according to a county planning report.

The staffers pointed out there was little construction progress, and the site did not meet the new requirement of the 2019 state law banning marijuana dispensaries within 1,500 feet of a casino.

The project also drew opposition from the Nevada Resort Association, the casino industry’s influential lobbying arm. NRA President Virginia Valentine, a former Clark County manager, objected to the project at the Nov. 17 meeting because of the law prohibiting a dispensary’s close proximity to a resort/casino.

At the request of County Commissioner Tick Segerblom, who pushed for the state law legalizing marijuana, the matter was held.

But five days later, the company obtained a temporary certificate of occupancy from the Clark County Department of Building and Fire Protection to open a mere 557-square-foot facility on the property, Miller said. The approval was handled by unnamed staff without a public hearing and without any input from the county commissioners.

Cheyenne Medical/Thrive then got a state license from the Cannabis Compliance Board and a temporary business license from the county on Dec. 3, beating its county-imposed license deadline by three days, Miller said.

Segerblom, whose district covers the dispensary site, said he doesn’t believe anything improper occurred during the licensing process.

“It seems to be a thing where the left hand doesn’t know what the right hand is doing,” he said, adding the county’s job is to try to help keep a business project alive.

“This is a great location for a dispensary,” he said. “There’s a lot of activity right there that would be appropriate for that location.”

But Segerblom also said he supports any push to improve transparency in the regulatory process.

Tyler Klimas, executive director of the Cannabis Compliance Board, said his agency did its due diligence and discussed the Sammy Davis Jr. Drive project with county officials and concluded it met all of the requirements for a state license.

Cheyenne Medical now has approval to open a dispensary, but the facility isn’t anywhere near completion and the state and county are losing valuable tax dollars, Miller said.

“The public should fully expect that approvals for any of these facilities should be done at a public hearing, just like all the rest of the businesses out there,” Miller said. “Everybody should be playing by the same rules.”

“Cannabis remains illegal under federal law and unless that changes, our members, as privileged license holders, must abide by all federal, state and local laws to remain in compliance with gaming regulations,” she said in a statement to the Review-Journal. “This is why we have a long and consistent position on the location of cannabis establishments and advocated strongly for the 1,500-foot distance separation from nonrestricted gaming licensees.

“The 1,500-foot buffer is a safeguard to keep the two industries separate. In this particular case, the location inside that 1,500-foot buffer is our primary concern, particularly with the legalization of cannabis lounges. Given the potential new use of a cannabis lounge added to this location, it raises policy concerns for our members and a number of issues for the site’s neighbors, including questions about adequate security measures, odor control and pedestrian safety.”

In an email to county officials last month, a deputy district attorney said the Cannabis Control Board concluded that the 1,500-foot requirement applies to the special use permit for the property, not the licensee. And since the the owner of the Sammy Davis Jr. Drive property got a special use permit in 2017, the restriction doesn’t apply to Cheyenne Medical’s application.

But that didn’t sway Miller.

“It’s the law,” he said. “And so we should follow the law … and this applicant did absolutely nothing to make it under that timeline, and we rushed to approve it on a made-up basis and bent all the rules in order to accommodate the opening of a facility that’s in violation of those distance requirements.”