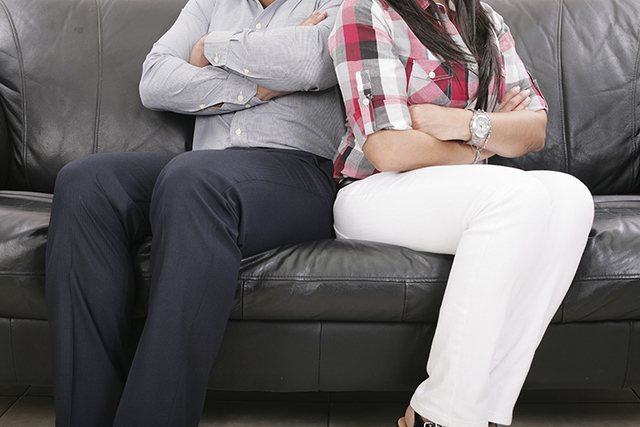 Couple sitting of the couch having problems (Thinkstock) 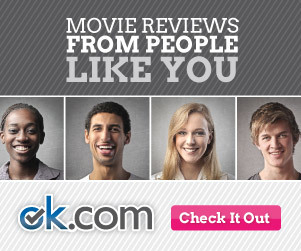 Worried that your S.O. has commitment issues?

Before judging their commitment level by a column from a well-meaning site or magazine, remember you have a brain and a heart to judge for yourself.

The following observations are here to assist you, your instincts and your common sense. Read them, and then forget them and judge your relationship on its own merits.

Here are a few indications your guy may be struggling with commitment.

When he introduces you to people in his life — or even the waiter at the restaurant — does he stutter? This is my … (Friend, Backgammon partner, parole officer … ?) If he can’t call you his girlfriend, you probably aren’t.

He is unable to split his focus.

He tells you that if he splits his focus the world will end. “I have to focus on college … or work … or my mother,” he says. Poor guy. He probably can’t chew gum and text either.

You know he has a family because he complains that his little brother is always asking him for money or to borrow his car. But whenever a family member calls he lets it go to message. Also, he says his sense of humor runs in the family — so they have to be around somewhere.

He won’t let you see his phone.

His cell is always locked and pass-worded. If he does give in to your pleadings to take a look, you have to do it right there in front of him, and the pass code is changed within hours.

He doesn’t introduce you to women in his life.

It is perfectly logical that there would be other females he knows. Surely you are not the first he has ever had a relationship of some sort with. However, if he is tight-lipped about having spoken with an ex-girlfriend last week — and you know he has — chances are you are not running in first place in his heart or his mind.

He won’t set up a date for next week.

Next week is a world away and he can’t even think about it – let alone pencil you in. “Things will change and it’s such a hassle,” he says. He is a short-term planner. Committing now means he can’t back out if something “better” comes up.

He is all about the grand gesture.

But he forgets about the smaller, less spectacular things — like holding your hand or opening the door for you. It is true that he could just be, as he explains it, “oblivious to others,” or “an only child,” or “thinking about something else.” But if he isn’t doing the little things it is likely because he doesn’t see the need.

He is either all or nothing.

It’s a big group activity with a limousine and a fancy dinner, or it is hanging out at your place. There is little in-between. His everyday happenings don’t include you. Shopping, getting the car washed, talking about his doctor appointments — you aren’t a partner in that sense of the word.

He still flirts with others.

His demeanor doesn’t change with other girls – as in, he is still flirting. This may indicate that he doesn’t believe he has found “the on” and is keeping his options open, or that he is clueless. You may need to have a talk with him.

He doesn’t ask for your advice.

Or, if he does, he just lets you talk and then changes the subject. Discussions don’t get too deep with him. He is simply not going to appear vulnerable or raise any questions about his mode de ser in front of you.

Having commitment issues isn’t the relationship killer that you may have been led to believe. There are many guys who come across as Joe-no-commitment that are dedicated and devout men, committing to women and families, and taking on responsibilities that would bowl a single guy over. Maybe he just needs proper motivation. If you are willing to commit, you might consider giving him a reason to as well.