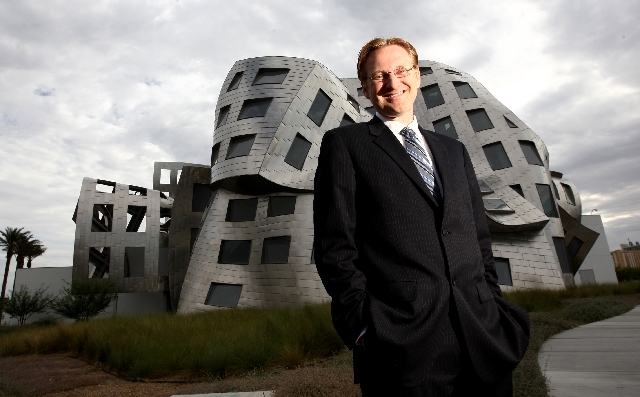 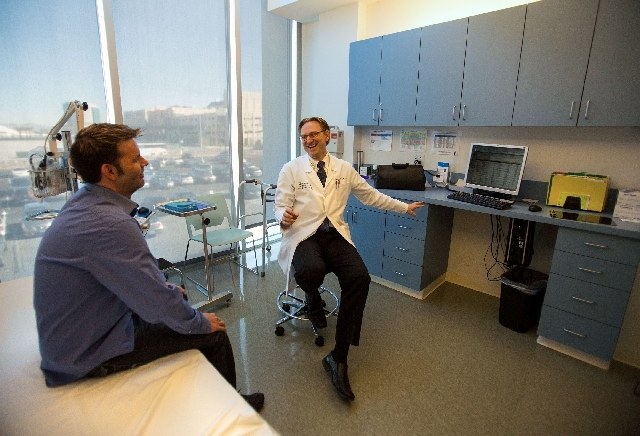 Dr. Timothy West, right, talks with MS patient Jason Buckley at the Cleveland Clinic Lou Ruvo Center for Brain Health in January. The center announced an expansion of the MS staff that will allow it to see more patients and participate in international clinical trials.

The Cleveland Clinic Lou Ruvo Center for Brain Health, its services for multiple sclerosis strained by a heavy patient load, has expanded its MS staff. That means fewer patients will end up in hospital emergency rooms for expensive treatment.

The expansion also allows the clinic to start participating in two international trials in the next two months, according to Dr. Timothy West, director of the MS program. Physician/researcher Dr. Le Hua and social worker Joanne Fairchild will join him in helping patients with the neuromuscular disorder.

One of the trials will study the drug Siponimod, designed to slow or stop progression of the most severe form of the disease.

“About half of the people with MS end up with secondary progressive multiple sclerosis, the most severe form of the disease and one we can’t really treat, so the patient goes steadily downhill,” West said. “This is a very important trial to me on both a professional and personal level. My mother has secondary progressive multiple sclerosis, as do far too many of my patients.”

The other drug trial involves the oral medication Gilenya, already used by patients in earlier stages of the disease. Though data suggest it has neuro-protective effects, it carries cardiac and liver side effects. Researchers hope to find out if the drug can be effective at a lower dosage.

MS, an often debilitating disorder for 400,000 people nationwide and an estimated 2,500 in the Las Vegas Valley, forces the body’s immune system to eat at the protective sheath covering a person’s nerves, a process interfering with the communication between the brain and the rest of the body.

People with severe cases of MS –– early symptoms include blurred or double vision, thinking problems, clumsiness or lack of coordination, loss of balance, numbness, tingling, weakness in an arm or leg –– may lose the ability to walk or even speak.

Some patients require attention for the unpredictable flare-ups associated with the neuromuscular disorder.

“I’ve been booking out three or four months in advance on appointments and couldn’t see people urgently when they had flare-ups,” said West, who has directly handled more than 2,500 patient visits. “I had to rely on local emergency departments.”

A flare-up, also referred to as an attack or relapse, often refers to an MS patient developing a new symptom or a regular problem becoming worse. For example, an individual who has had numbness in his right leg no longer can feel anything below the knee.

Because of West’s schedule, that patient would have to go to a hospital emergency room for care instead of the infusion room at the Ruvo Center. That care, often consisting of intravenous steroids to deal with the sudden inflammation in the brain that caused the new symptoms to flare, often means a long wait and costs between $10,000 to $15,000 for what frequently becomes inpatient treatment at the hospital.

Yet West said the same treatment can generally be done on an outpatient basis in the infusion room at the Ruvo Center and costs $1,000 or less, with the patient often not having to miss work.

“With Dr. Hua aboard, we can save patients money and open up hospital beds,” West said. “Everybody wins.”

The chance to do both patient care and participate in research trials brought Hua to the Ruvo Center.

She was trained at the University of Southern California, did her residency at Stanford University Medical Center and her neuro-immunology fellowship training at the Barrow Neurological Institute in Phoenix.

The addition of licensed clinical social worker Fairchild to his staff can’t be underestimated, West said.

With many people diagnosed with the disease just as their careers and family life are getting underway in their 30s and 40s, West said the psychological effect is “devastating.”

As many as 50 percent of patients suffer severe depression. Fairchild will help patients and families, West said.

“I want to help people learn coping mechanisms, help them through the grieving process that comes with a diagnosis,” said Fairchild, who last worked at Harmony Healthcare in Las Vegas.

The psychological help offered to patients and their families at the Ruvo Center is free as a result of a $1.3 million grant from the Conrad N. Hilton Foundation. It also made the additions to West’s staff possible. The grant was announced in February.