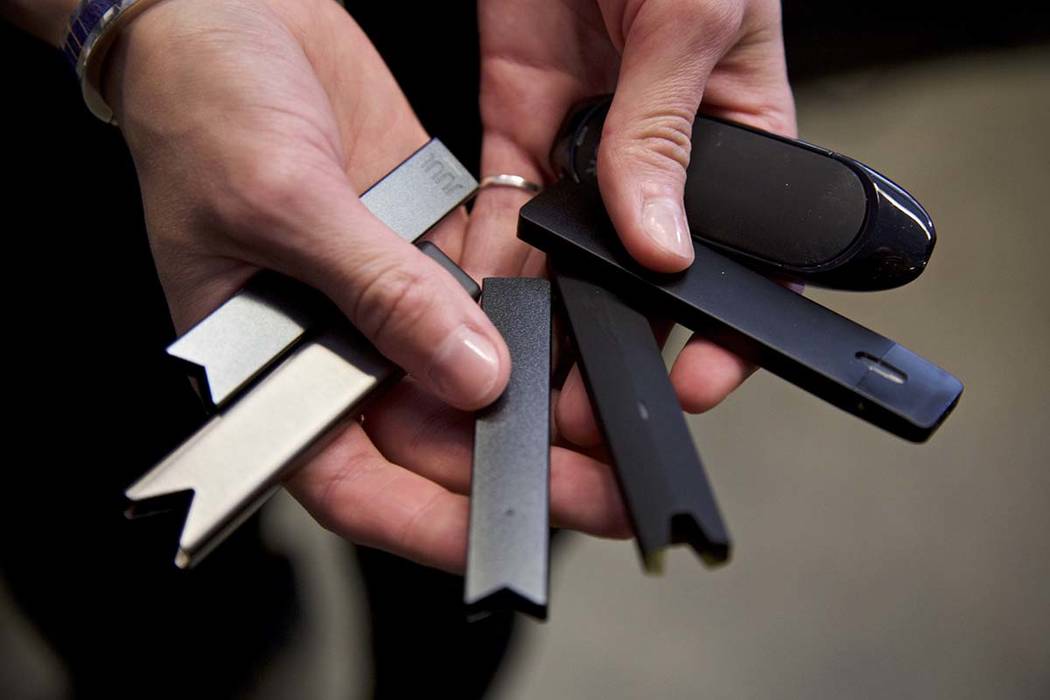 A researcher holds vape pens in a lab at Portland State University in in Portland, Ore. Nevada is not yet part of a multistate outbreak of severe pulmonary disease associated with the use of electronic cigarettes. (Craig Mitchelldyer/AP)

The Southern Nevada Health District on Friday joined other public health authorities in warning the public against using e-cigarettes, citing the potential for severe lung illness associated with the use of the devices.

The warning came on the heels of the federal Centers for Disease Control reporting this week as many as five deaths and 450 cases nationwide possibly associated with vaping.

Although there have been no cases identified in Nevada so far, medical experts here remain concerned about the health consequences of the little-studied smoking alternative.

For its part, the Nevada Vaping Association believes that health regulators are needlessly scaring the public by issuing an overbroad warning.

The CDC, after declaring a multistate outbreak, has not yet identified any specific product or compound that is linked to all the cases. However, many of the patients reported recently using products containing THC, an ingredient in marijuana.

The illnesses have all surfaced this year, and the number has been growing quickly in the last month as more states have begun investigations. A week ago, U.S. officials pegged the number at 215 possible cases in 25 states. Deaths have been reported in California, Indiana, Minnesota, Illinois and Oregon.

“We’re all wondering if this is new or just newly recognized,” Dr. Dana Meaney-Delman of the Centers for Disease Control and Prevention told the Associated Press on Friday.

Public health authorities are advising people not to use vaping products and e-cigarettes, period. Battery-powered electronic cigarettes deliver an aerosol to the user by heating a liquid that usually contains nicotine, flavorings and other chemicals. Vape customers can pick from flavors such as “Cinnamon Sweet Sugar Cookie” and “Virginia Tobacco” while selecting the level of nicotine, if any, in their product.

About 6 percent of adults surveyed in Nevada said they were current users of e-cigarettes, according to an August survey by the Office of Analytics of the Nevada Department of Health and Human Services. Among 18- to 24-year-olds, the number jumped to 16.5 percent.

“These products should never be used by youth, young adults, pregnant women, and people who do not currently use tobacco products,” the Southern Nevada Health District said in its advisory, which was issued in conjunction with Carson City Health and Human Services and the Washoe County Health District.

Many patients have required medical treatment with supplemental oxygen. Some required assisted ventilation. And some were treated with corticosteroids.

But Alex Mazzola, president of the Nevada Vaping Association, said that the reaction of public health authorities has been overblown.

“These cases have to do with THC cartridges mixed with oil” and not vaping e-liquid, he said. Oils are being used on the black market to cut marijuana products, Mazzola said, adding that people “shouldn’t be vaping any oils.”

He said that vaping as directed remains much safer than smoking cigarettes.

But Las Vegas pulmonologist Dr. Angelica Honsberg said that her observation has been that vaping “does exacerbate respiratory symptoms in patients with asthma, COPD (Chronic Obstructive Pulmonary Disease) or other types of lung disease.” Vaping also is a relatively new phenomenon and there isn’t sufficient data yet to fully know the risks, she added.

“E-cigarettes probably have fewer chemicals than tobacco does, but they’re different chemicals and we just don’t know their side effects,” said Honsberg, an assistant professor in the UNLV School of Medicine Department of Internal Medicine.

Honsberg said there has been a widespread perception that e-cigarettes are safe. But as with conventional cigarettes, there is concern about nicotine addiction. There also is a risk of lung disease, she said, with some studies showing that vaping induces some of the same changes in the airways as cigarettes.

E-cigarettes are marketed as a way to help people quit smoking cigarettes, and at least one study has indicated that they may indeed help.

“But they can’t be thought of a safe, effective way to stop smoking,” Honsberg said.

“I’m not concerned about it,” the 27-year-old former smoker said. “More people die from cigarettes.” 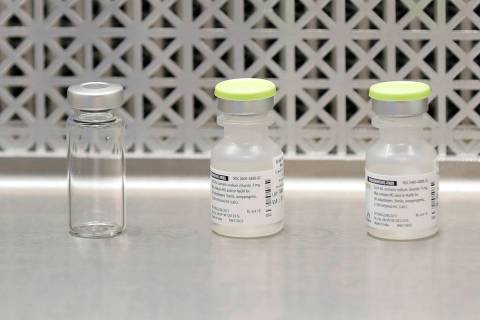 Health care workers and nursing home residents should be at the front of the line when the first coronavirus vaccine shots become available, an influential government advisory panel said in Tuesday.