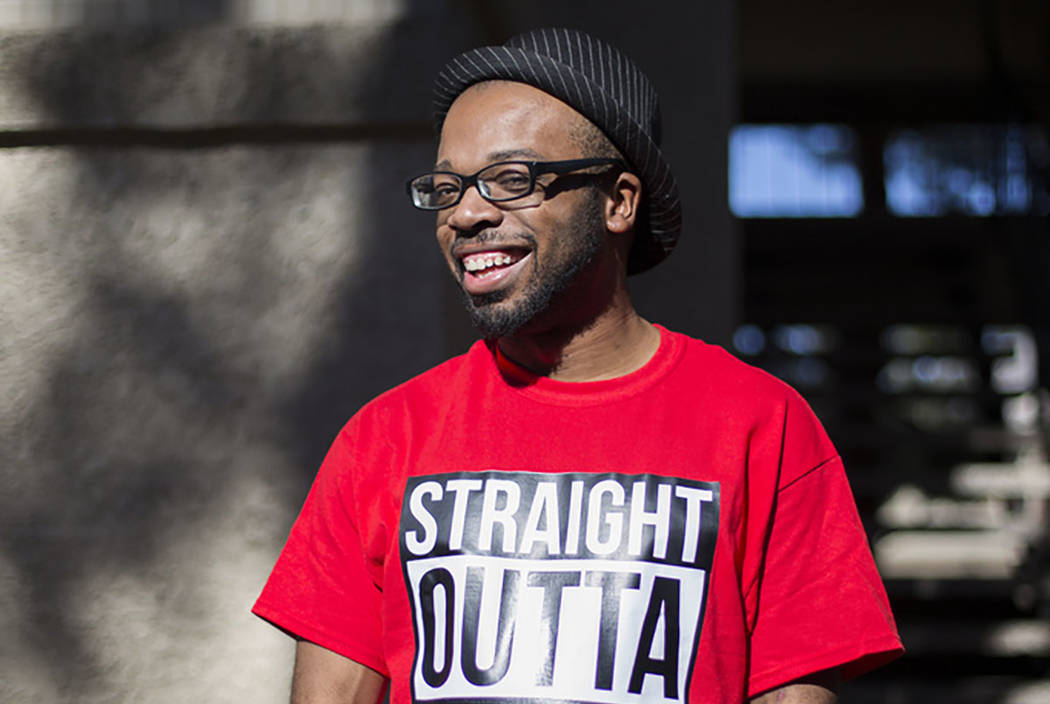 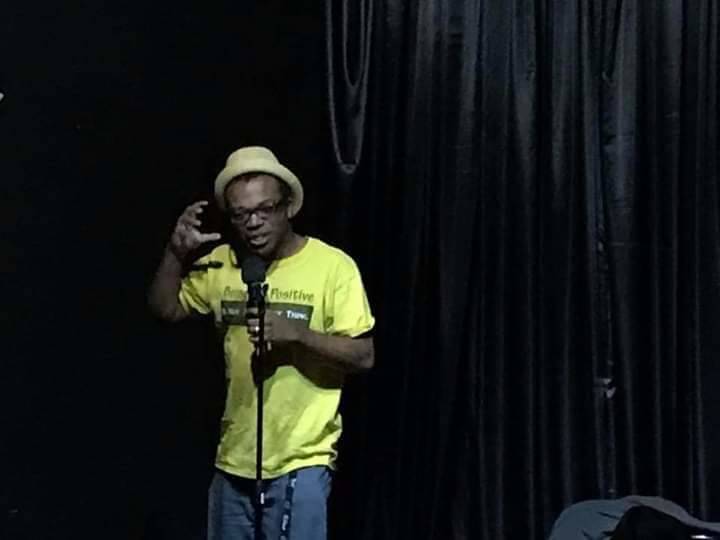 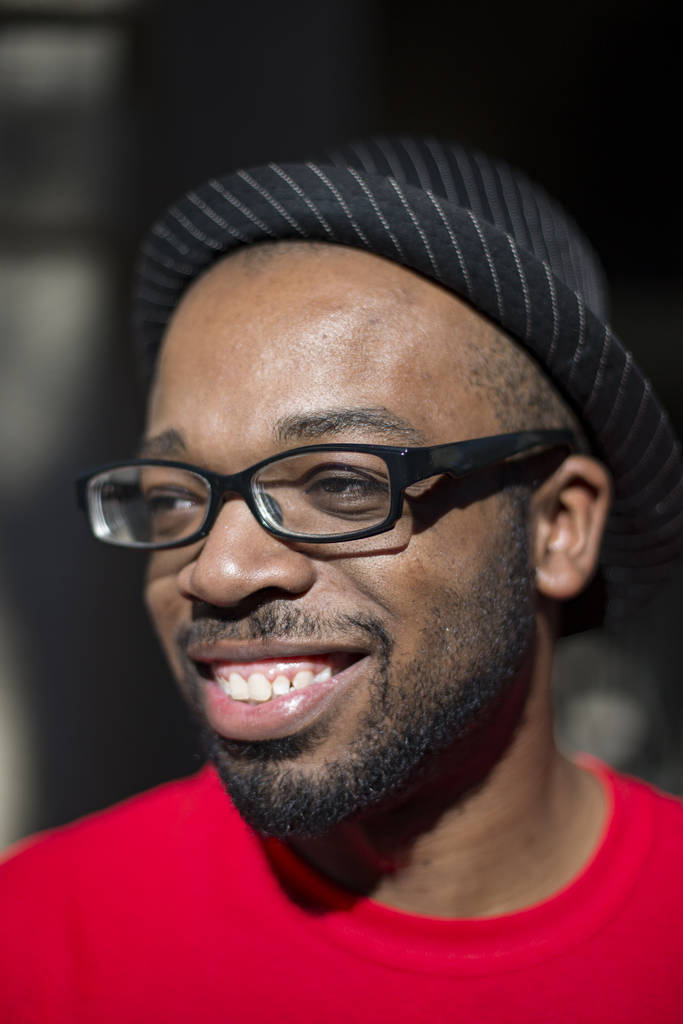 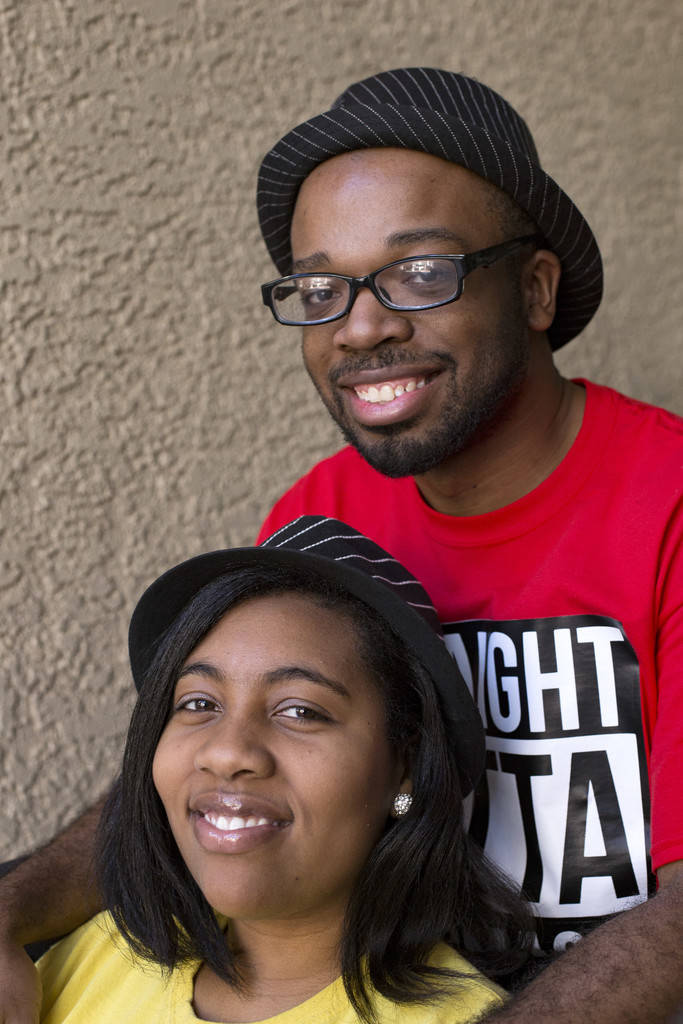 Comedian Brandon Cox Sanford and his wife Lauren Brown outside their home in Henderson, Tuesday, Feb. 19, 2019. Cox Sanford was born with HIV and brings it up in his standup sets to destigmatize the virus. (Rachel Aston/Las Vegas Review-Journal) @rookie__rae 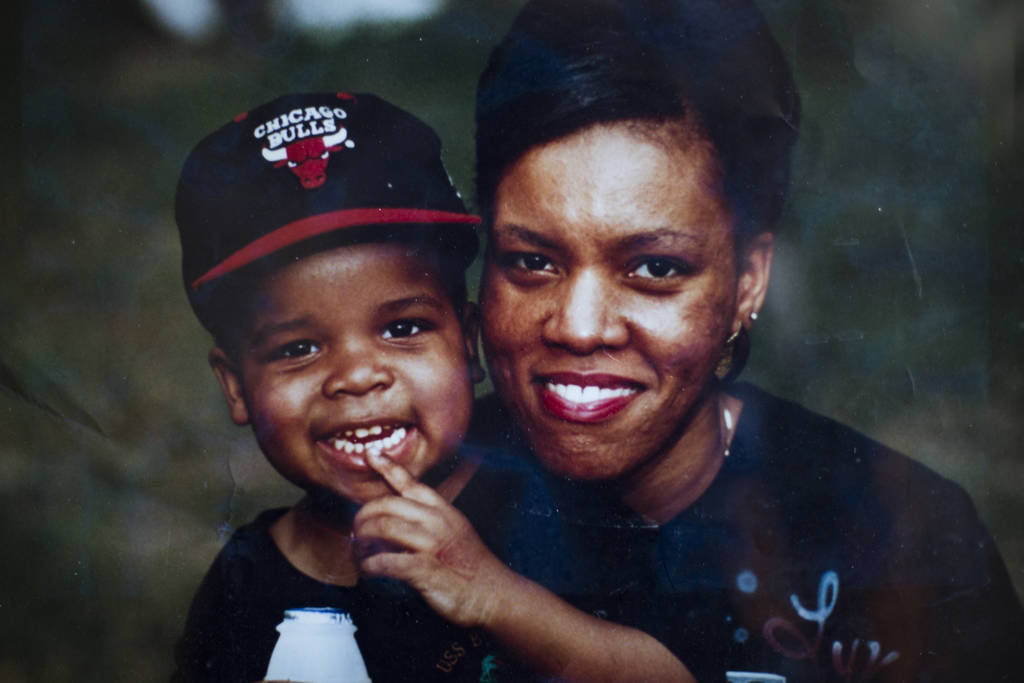 A photo of Brandon Cox Sanford with his mother Linette at his home in Henderson, Tuesday, Feb. 19, 2019. Cox Sanford was born with HIV and brings it up in his standup sets to destigmatize the virus. (Rachel Aston/Las Vegas Review-Journal) @rookie__rae 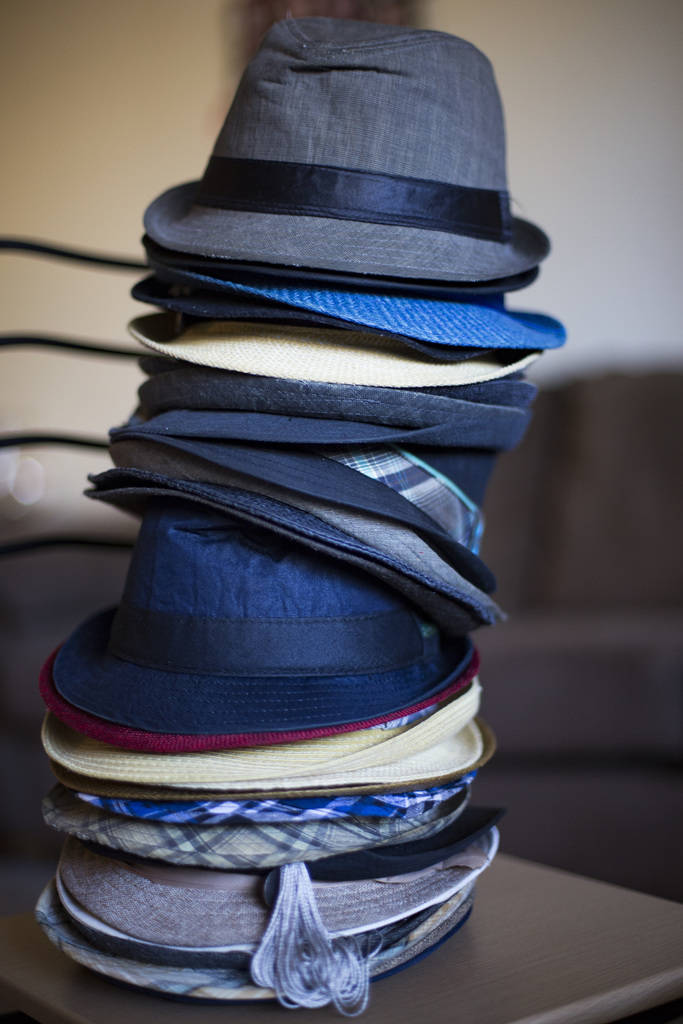 Comedian Brandon Cox Sanford's signature fedoras at his home in Henderson, Tuesday, Feb. 19, 2019. Cox Sanford was born with HIV and brings it up in his standup sets to destigmatize the virus. (Rachel Aston/Las Vegas Review-Journal) @rookie__rae 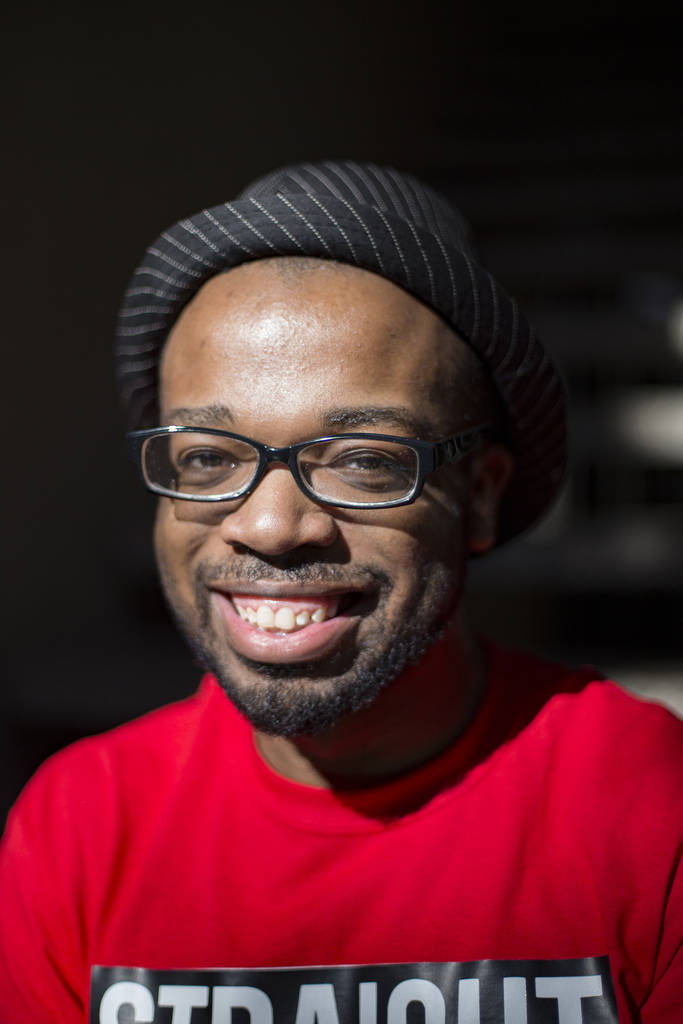 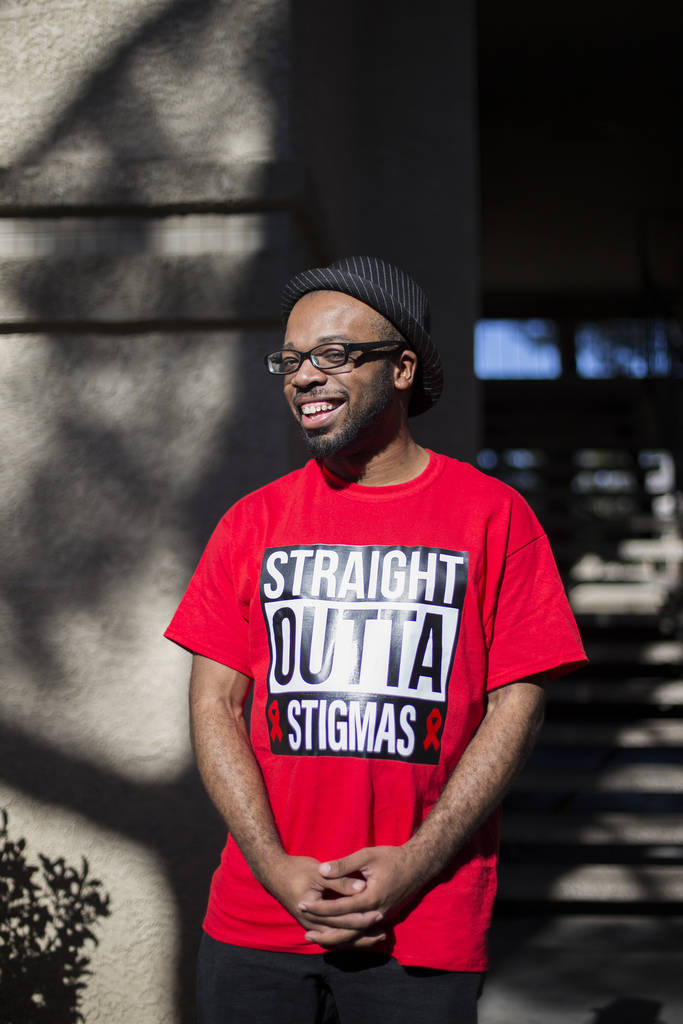 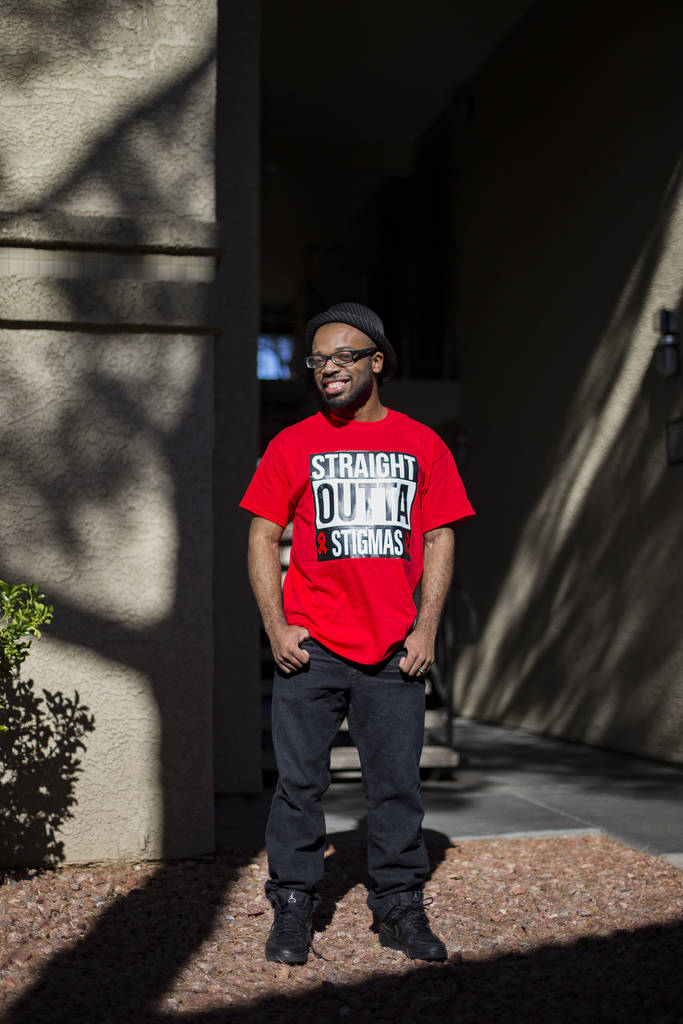 When Brandon Cox Sanford first told a group of strangers he was HIV-positive, nerves overtook him.

Cox Sanford, then 23, stood in front of a science class at Columbia College in Chicago, where he was a student, and shared his experience.

“Only a few family and friends knew,” he recounted on a recent afternoon. “I had to really mentally prepare myself for it.”

Now, talking openly about his status is no big deal for the part-time comedian who makes light of his situation to break down stigmas surrounding HIV and AIDS.

“It’s almost been therapeutic,” he said. “My biggest goal is to get people to talk about HIV.”

The Centers for Disease Control and Prevention published its first AIDS-related report in 1981 on five young, gay white men who, previously healthy, contracted a rare lung infection. According to the federal HIV.gov, the report was the first on what was later identified to be AIDS, or acquired immunodeficiency syndrome.

AIDS is the most severe form of HIV, human immunodeficiency virus, which attacks the T-cells that attack infections. Though all people with AIDS have HIV, the opposite isn’t true.

Cox Sanford, now 26 and working as an usher at the Orleans Arena and a school photographer, has been HIV-positive since birth. He was diagnosed at age 2, after he and his mother, who passed the virus to him, became ill.

Cox Sanford’s mother died in 1998 of AIDS, but his own story is a more positive one. Since childhood, Cox Sanford has taken two drugs, including an antiviral, to suppress the virus and, like any other healthy, young 26-year-old, carries on with his life.

But stigmas persist, said Antioco Carrillo, executive director for Aid for AIDS of Nevada (AFAN), a local advocacy organization. For instance, most people assume HIV is only spread through unsafe sex or drug use, and therefore, that people living with HIV have participated in promiscuous behavior that led to their diagnosis.

“We think that if someone is HIV-positive, then they did something weird sexually,” Carrillo explain. Society less often sees the picture of a healthy person and associates that with an HIV-positive status, he said.

“They see them as the bad apple, and nobody wants to have anything to do with them,” Carrillo said.

In Cox Sanford’s experience, people tend to assume he’s sick all the time. He laughed at the thought in a recent interview.

“Some people don’t realize it’s very possible to be healthy with HIV and have a very normal life being HIV-positive,” he said.

When Cox Sanford first took the stage in December of 2017 at The Urban Lounge Las Vegas on Charleston Boulevard, his jokes drew crickets, he remembered.

Now, thanks to a little confidence boost and support from his wife, 24-year-old Lauren Brown, he’s found a way to talk about HIV and AIDS that makes him and the topic more accessible to a crowd that may not have met someone with the status before.

“I always think about, ‘How can I prevent my mom’s death from happening again (to someone else?),’” Cox Sanford said. “There are people out here living with HIV and AIDS. We do need to talk about it so we can prevent it.”

Carrillo, who hasn’t seen a performance by Cox Sandford, commended the comedian for publicizing his life with HIV in a way that normalizes discussion around it. He said he’s never come across a method quite as creative.

“I admire the person who’s doing this,” Carrillo said. “When you make people laugh, you bring them close to you, and the great part about comedy is that you get them to be attentive to you, and based on the information you provide, you grab them.”

When Cox Sanford takes the stage, it’s in a fedora — he has 38 of them — and a destigmatizing T-shirt with a quote like “Straight outta stigmas” or “Being HIV-positive is not a negative thing.” Onstage, he goes by “Andy Feds,” in honor of an influential teacher and as a tip-of-the-hat to the extensive fedora collection.

One of his favorite jokes: “I tell people I’m HIV,” then he pauses, and continues, “positive,” and throws up finger guns and a flirtatious wink.